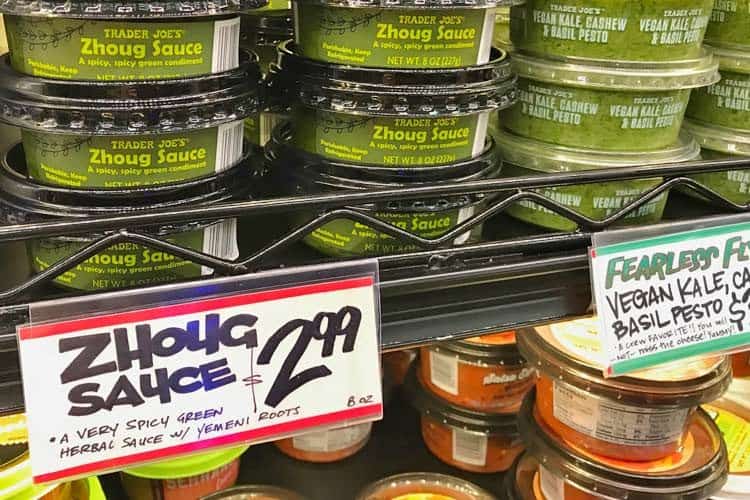 What Is Zhoug Sauce? A Spicy Dairy Free Pesto Substitute

It’s hard to find premade pesto that’s made without cheese.

Even here in LA, just two vegan brands are regularly seen at Whole Foods and similar stores; Bear Pond Farm and Basiltops. The latter is a locally available brand from San Diego, the former is refrigerated and not sold at many places.

If enjoy heat, then consider zhoug as an alternative to store bought dairy free pesto. 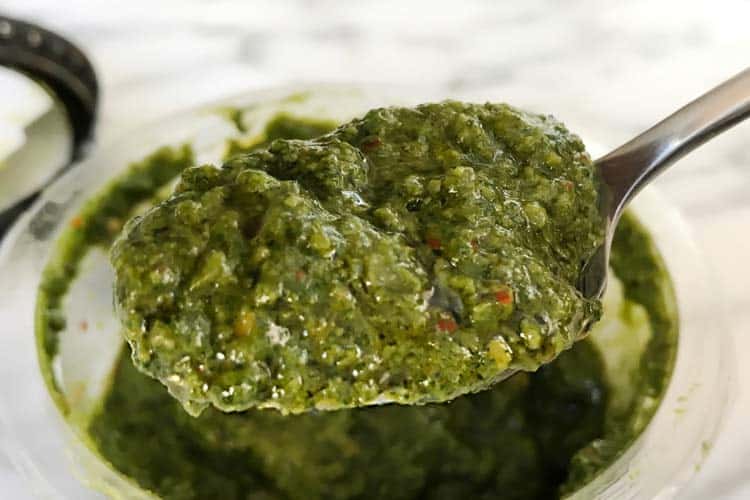 Along with or in place of hummus or tahini, zhoug is used to flavor pita bread, falafel, shawarma, and shakshouka.

It’s also known as Yemenite green chili sauce, as Yemen is where it comes from.

While most zhoug is green, there’s also red and brown versions. They get their color from tomatoes and red chili.

The pronunciation of zhoug in English is s-choog, where the “ch” sound is similar to the sound of gently clearing your throat.

English spellings also include schoug, s’chug, and zhug. In Yemenite, Hebrew, and Arabic, the root word means to grind, which describes the form it ingredients are in.

For Americans, it can be hard to say and spell. At least it’s easy to enjoy!

Pine nuts, cashews, and walnuts are in traditional basil pesto, while this sauce is safe for nut allergies since it’s nut-free.

When comparing equal weights of each, fresh cilantro leaves have slightly more antioxidants than basil. Their ORAC values are 5,141 and 4,805, respectively.

Now that’s only 7% more, not enough to sway a decision. However, there’s another good reason to pick cilantro vs. basil. 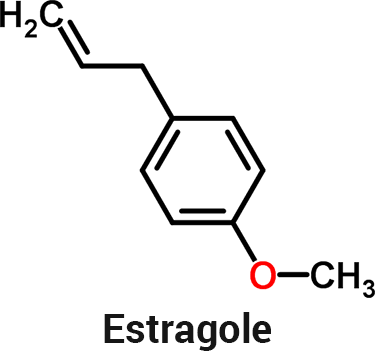 Since 1999 the State of California has recognized the compound estragole as a carcinogen. It causes DNA mutations and liver cancer in rats. The European Union also declares it as being a carcinogen, in regards to herbal medicines that contain it. (1) (2)

Now the good news is that the concentration of estragole naturally produced by the basil plant is relatively low. It’s found in the essential oils. The seeds – not the leaves – have the most of that. (3)

More concerning are tarragon and concentrated sources of fennel, like fennel tea. FYI we at Superfoodly avoid altogether those two spices, but not basil.

Unlike fresh fennel which has almost no antioxidants (ORAC of 307), basil is a potent source (4,805). That’s believed to help offset the effects of its estragole. (4)

Still though, the idea of regularly eating concentrated sources of basil – i.e. pesto sauce – may not be the healthiest choice.

Oregano (Origanum vulgare) and parsley (Petroselinum crispum) may seem like good switch outs, but they too contain estragole. Less than basil though.

The main essential oils in coriander leaves/cilantro are linalool and 2-decenoic acid. There are 35 different compounds in the oil and estragole is in such a minute amount, it’s not even detectable in every plant part. (5)

Since cilantro is high in antioxidants and contains almost no estragole, it’s the best alternative for basil leaves in pesto. 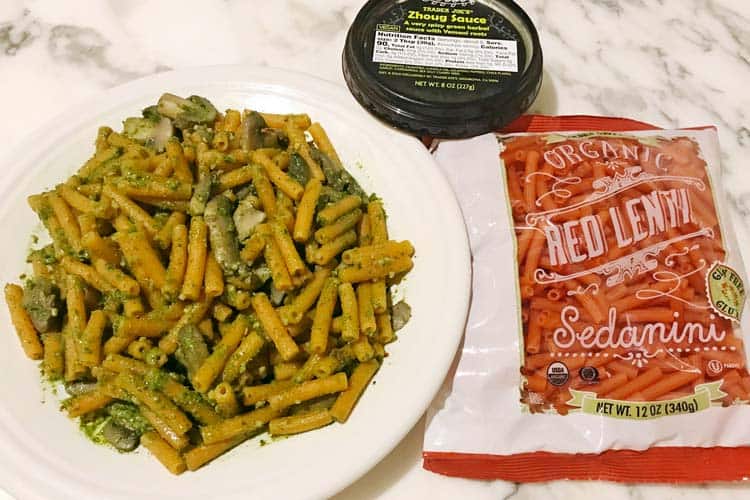 Here we combined Trader Joe’s gluten free red lentil noodles (low carb and high protein) along with the zhoug, as an alternate pesto without nuts and cheese. With the mushrooms added, this three-part meal is something anyone can make.

Although not conclusively proven, research suggests that cilantro may have the following health benefits:

In a randomized, double-blinded, and placebo-controlled clinical trial on weight loss, those taking cumin supplements dropped the same number of pounds as those on the prescription weight loss medicine Xenical (orlistat 120 mg). (10)

Aside from adding flavor, the capsaicin in chili peppers is a potent anti-inflammatory. This may be good for arthritis. (11)

When it’s made the traditional way without oil, a 2 tablespoon serving of zhoug sauce will be just 10 to 20 calories.

Trader Joe’s zhoug sauce adds canola oil, which is responsible for the majority of the caloric content; 90 per 2 Tbsp serving. 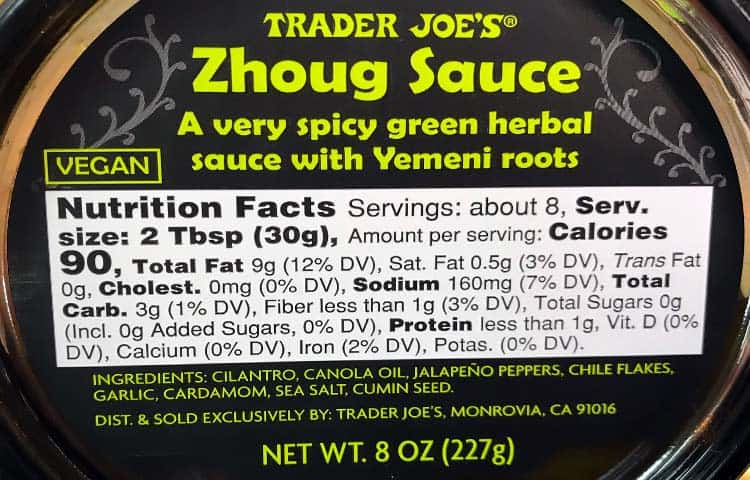 Oil-free would be ideal, yet this is still lower than your average basil pesto sauce.

A jar of Trader Joe’s pesto alla Genovese is higher at 125 calories, when you use the same serving size.

Biutoni is the most common store bought pesto. 145 calories for 2 Tbsp. That’s 60% higher than the zhoug sauce from Trader Joe’s.

Even when it has oil, because zhoug is so spicy, you won’t need much to flavor a whole plate of pasta.

Unlike the Parmesan-laden pestos, there’s no cholesterol in zhoug since it’s dairy free.

Store bought dairy free pesto is available, but it’s hard to find. Aside from the brands Bear Pond Creek and Basiltops in the refrigerated section, the only ones nationally available are shelf-stable; Meditalia in a jar and Amore pesto paste in a tube. For stores that carry them, they’re typically in the pasta sauce aisle.

The nice thing about the zhoug spice blend is that it’s a vegan pesto substitute by default. You don’t have to search long and hard to find dairy free versions. Vegans at restaurants can order the Middle Eastern green sauce without concerns of what’s inside.

In the US, the only widely available version is from Trader Joe’s. It was new for 2018 and you know hwo their products are – what’s sold today is gone tomorrow.

We give Trader Joe’s zhoug sauce rave reviews for taste, though we like a lot of heat. Given how spicy it is, we’re not sure if it will sell enough to become a staple in their product lineup.

Middle Eastern markets will sell it but as with TJ’s, those aren’t in every town.

You can buy it in a jar on Amazon. We look forward to trying that.

How to make it can be relatively easy – or time consuming – depending on the ingredients you use.

Prepping fresh peppers and chopping up bunches of cilantro leaves won’t be to everyone’s liking.

The antioxidants in dried vs. fresh spices hold up extremely well, so you don’t have to feel guilty about taking that shortcut for some of the ingredients. It won’t taste as good as fresh, but it’s a lot faster.

You can eat this raw. If the garlic is too strong for you, saute it for 30-60 seconds before adding.

Without oil, this will only be 10 to 20 calories per 2 Tbsp serving and be virtually fat free.

Whether olive or another variety, refined oils are 120 calories per Tbsp. However many you add, tack that onto the calorie count.

You can reduce the spiciness by using fewer peppers. For those who don’t like a lot of heat, make it with just a couple peppers. Do a taste test and then add more to the blender, until it reaches the right amount of heat for you.

What to do with zhoug sauce is limited only by your imagination. We prefer it over dairy free pesto because it’s a lot more flavorful and when oil free, it’s guilt free. Other ways how to use the sauce include sandwiches and spreads for veggies and tofu steaks.