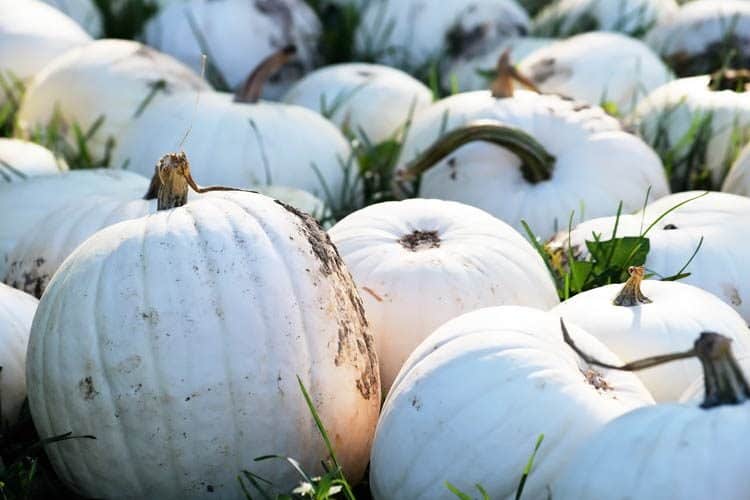 Ghost or White Pumpkins Are Edible, But Are They Healthy?

During the childhoods of your grandparents and likely your parents, when Halloween rolled around, the question was not what color to carve… because there was only one option; orange.

Beginning in the 00’s, white pumpkins for décor became increasingly popular. Moving from a niche novelty, to relatively commonplace.

Today, you don’t have to go out of your way to find them. Even places like Trader Joe’s and Walmart sell them. Harder to find are the giant white pumpkins.

The white have similarities and differences versus orange.

What is a white pumpkin?

Also known as ghost pumpkins, they are an albino variant of the same plant species; Cucurbita pepo. They have naturally white or ivory skin. The inside color of a white pumpkin is not white. Their flesh is actually orange and looks similar to a regular pumpkin.

While there are many different types of white and orange pumpkins, they are all cultivars of the squash plant. That means there aren’t different species. Botanically, they’re not considered different plants.

The most popular types of white pumpkins are: 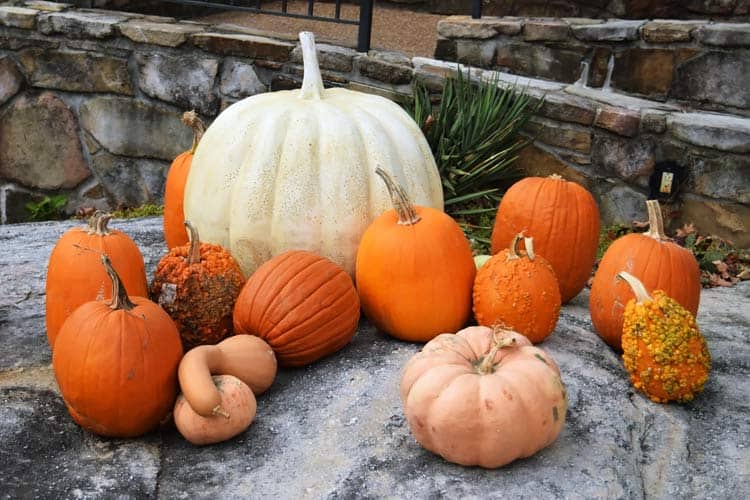 The giant ones really stand out in decor when they’re contrasted with the normal orange.

Can you eat them?

Everything you do with an orange pumpkin you can do with a white pumpkin. You can eat them safely, including the seeds. You can cook them in any recipe that calls for the vegetable, baking a pumpkin pie. They are good to eat and taste very comparable to the regular orange.

The best tasting pumpkin white variety may be the Lumina. It’s very sweet and has a smooth texture that’s smooth on the tongue. Perfect for pies!

Some people even let their dogs eat ghost pumpkins but that’s not recommended. There’s a potential choking hazard and canines, which are carnivores, don’t have the digestive systems suited for raw vegetables. Gas, bloating, and vomiting may result. However, these dangers and side effects hold true with the orange variety, too.

Given that albino pumpkins cost more, and the fact that they are orange inside – meaning they look the same – there aren’t really aesthetic or culinary benefits in eating them. 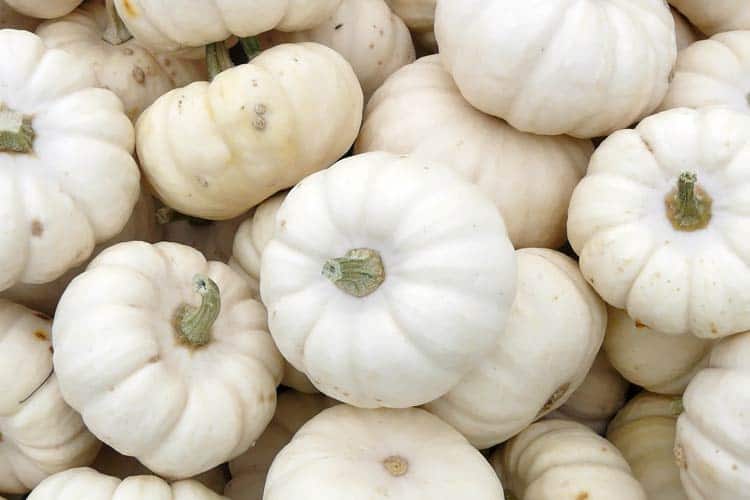 Cooking and eating mini pumpkins makes sense when they’ve already served their decorative purpose. For example after a Halloween party, cut ’em up and use for recipes.

Don’t eat large white pumpkins that have already been carved. If you don’t refrigerate the guts and other edible portions immediately, bacteria and fungi growth begins. So if you’ve had a big albino Jack-o’-lantern on your porch that was carved in days or weeks past, pitch it after it has served its decorative purpose.

Because they remain a niche food, white pumpkin nutrition facts have not been published by the USDA, nor by any grower/supplier. Their calorie count will be comparable to orange, which is 44 per cup of the boiled and mashed (8.6 oz). It will contain 2g of protein, 3g of fiber, 11g of carbs and 5g of sugar.

The essential minerals in albino vs. orange pumpkin should be similar. One cup mashed will offer 16% of the daily value for potassium, 11% for manganese, 8% for iron, 7% for phosphorus, 6% for magnesium, 4% for calcium and zinc, and 1% for selenium.

While they are comparable in calories and basic nutritional values, including the mineral content, white pumpkins may be less healthy when it comes to vitamins.

As reported in a 2016 issue of Horticulture Research journal, phytoene synthase is lower in white versus orange-fleshed squash. This correlates with lower carotenoid synthesis and hence, less vitamin A.

Now that was for Cucurbita maxima which includes what some cultures call a pumpkin, but what Americans think of all come from the closely related Cucurbita pepo.

Regardless, since most of the albino varieties have orange flesh, their beta carotene (vitamin A) and other carotenoids should be similar to orange. However, some types of white have a lighter orange flesh and near the outer rind, the color becomes even paler. (1) (2)

In short, it’s possible that some albinos have the same amount of vitamin A and other carotenoids, but it’s likely they have less.

Most of the antioxidant content in pumpkins come from carotenoids, which would mean the ghostly may have less.

That’s nothing to fret about, because the orange don’t have much to begin with.

Their ORAC value is only 483, which isn’t much better than iceberg lettuce at 438.

Regardless of color, pumpkins are a poor source of antioxidants. The orange and albino are still good for you though, because they are a filling food with few calories; perfect for weight loss. Plus, they are still a rich source of several essential minerals. 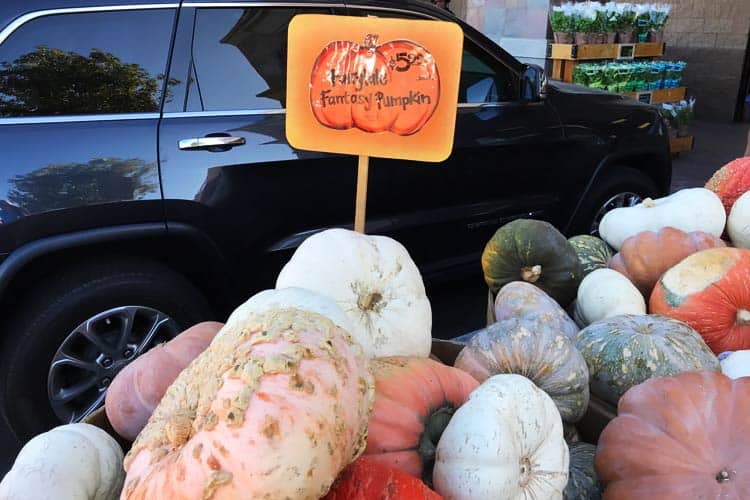 Spotted by us last October at the Trader Joe’s in Manhattan Beach, CA. They call them “fairytale fantasy pumpkins.”

Beginning in September and spanning through November, you can find white pumpkins for sale at major grocery stores like Kroger, Whole Foods, Trader Joe’s, Meijer, and Walmart. Smaller chains often carry them too. Since they’re not sold as food, you typically find them outside the store’s front entrance, stacked high in a big box.

Drugstore chains like CVS and Walgreen’s will sell the baby white pumpkins (Baby Boo and Gooligan). They’re often near the checkout. Lowe’s and Home Depot sell the small and mid-sized.

As with orange, the largest giant white pumpkins are a specialty item that’s harder to find for sale. Chain stores don’t like dealing with them since they weigh 80-100 lbs each. You have the best chance of buying them at a local nursery, or a farmer who sells direct.