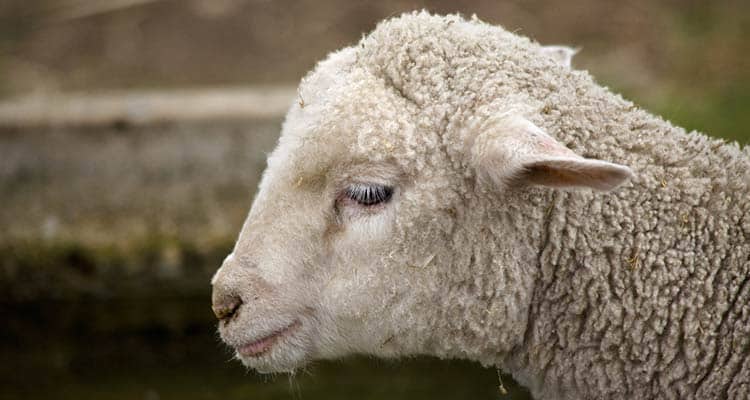 No, Lanolin Isn’t Killing You. What’s Fact vs. What Sells

In marketing, there is an age-old adage that “fear sells, so sell fear.”

It’s the oldest trick in the book for a company to get you to buy their product instead of another, or to spend more for their product, because you fear the other products.

Unfortunately, it looks like this might be happening today when it comes to nursing mothers using lanolin oil for breastfeeding to soothe their sore and cracked nipples. Sales of lanolin lip balm, hair products, and other cosmetics are probably being adversely affected by this hysteria, too.

Is lanolin safe for baby and mother? Are there really dangerous side effects and other health issues you should be worried about?

You may have noticed the many mommy bloggers ringing the alarm bells on this ingredient. What you may, or may not, have noticed are their disclaimers which state “written while serving as a paid brand ambassador for [specific brand of organic lanolin]” or similar verbiage.

But in their defense, these bloggers do raise some legit questions. Additionally, there is one concerns they don’t raise that you need to know.

Let’s get to the bottom of it.

Lanolin is a natural substance produced by a sheep’s wool.

If you’ve ever petted a sheep before, you will notice the fur has an ever slight waxy surface. Just as your own scalp produces oil which protects your hair, sheep are doing the same thing with theirs.

But theirs is a bit more extreme than ours. This wool wax, or wool grease as it is known, helps their coats repel water.

You know how long it takes for your own hair to dry and that’s with a hair dryer. Can you imagine what it would be like for a poor ‘ol sheep in the rain if its coat wasn’t at least semi-waterproof?!

How long has lanolin been around? It’s believed that humans have been using this substance for nearly 8,000 years. There are records that ancient Egyptians would melt it in the sun and then smear it on their face and skin as a moisturizer. More recently – since the late 19th century – lanolin cream, oil, and balm have been used for eczema/dermatitis.

Using it for painful and dry nipples, at least on a widespread scale, is probably a more recent phenomenon.

Creams containing this ingredient were all the rage back in the 70’s and 80’s (and that may explain why your mother swears by it, but your friend the same age as you do not).

It’s also in your vitamin D supplements! Vitamin D3 (cholecalciferol) is made from lanolin. D2 (ergocalciferol) is not made from it, but the D2 form is of little use to humans (1) so don’t waste your money on it. If you insist on lanolin free vitamin D3, you can now buy plant-based vegan versions made from lichen (2) but they are a lot more expensive.

Not only are you worried about your own safety, but also that of your newborn baby.

If you are pregnant for the first time, those worries are only magnified. The pregnancy category for lanolin is “N” (not classified) which may even foster further concerns.

Does lanolin have pesticides and DDT? Is it toxic if ingested? Does it cause cancer? Does it have side effects? Is it GMO?

These are all legit questions to ask. But when people use scare tactics to try and loosely connect a “yes” answer to those questions, it is somewhat deceiving.

Let’s answer all 5 of those questions, with the full truth for each.

The facts about pesticides

Just as your dog or cat is treated for fleas, lice, mites and ticks, sheep are treated too. For all of these animals, call those chemicals for what they are: pesticides and insecticides. Sheep – just like your dog and cat – has to get treated periodically to be pest free.

The top 3 pesticides used on sheep in 2005 were permethrin, fenvalerate, and malathion, according the Organic Trade Association (3).

The first 1 has been around for many decades, the other 2 are newer.

Let’s go back to the 80’s for a minute, before we even cared about eating organically and using natural products. Even in that era, check out the EPA’s memorandum on the one that was around back then – permethrin – to see how much they were able to find (4): 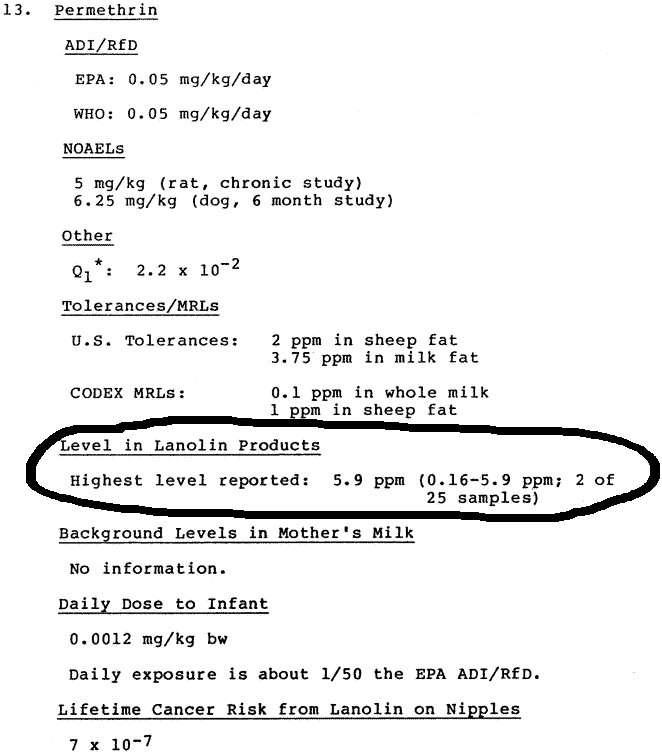 That’s right folks, 5.9 parts per million for lanolin products. And remember, that was the eighties when we didn’t give a hoot and ranchers were living wild west style, getting away with less regulation.

If bloggers are going haywire over the 5.9 ppm, then why aren’t they doing the same regarding the 20 ppm tolerance of permethrin for spinach or lettuce (5)? After all, you eat spinach! At least with lanolin on your nipples, only residual amounts that can’t be wiped off would go into your baby’s mouth.

Or better yet, the bloggers who cry wolf that those sheep are eating contaminated alfalfa. Yes, that is true. But the threshold of that particular pesticide, as an example, is 20 ppm for alfalfa forage (same as the spinach we eat) and 45 ppm for alfalfa hay.

In short, it’s important to look in perspective.

Oh and the talk about lanolin and DDT. That’s an easy one to answer, it certainly shouldn’t have DDT, since that substance is banned in the US. But if the lanolin is coming from other countries? More on that in a minute.

Lanolin, in and of itself, is not toxic. If it is truly purified lanolin ointment, the toxins (i.e. pesticides) are in extremely miniscule amounts or at least should be.

Does it cause cancer?

Pesticides and insecticides? With many, absolutely they cause cancer, if you are exposed to certain thresholds.

But as far as lanolin by itself – in the hypothetical scenario where there was zero ppm of any contaminants – you could conclusively say it does not cause cancer. Lanolin is not a carcinogenic.

In fact, it turns out lanolin might possibly have “apparent anti-carcinogenic action” as suggested in a study done by Oxford University, published in 1947 (6). Sadly, more recent research on this topic has not been done that we are aware of.

Does it have side effects?

As far as side effects of this ingredient, here is the verbiage we often see:

Get emergency medical help if you have any of these signs of an allergic reaction while taking lanolin topical: hives; difficult breathing; swelling of your face, lips, tongue, or throat. Stop using this medicine and call your doctor if you have severe burning, stinging, redness, or irritation where the product was applied.

This is listed for topically applied lanolin cream, powder, and ointment.

What’s interesting is that some professionals are certain there are side effects of lanolin (7), while others believe there isn’t, at least according to the “the myth of lanolin allergy paper” written in 1998 (8). In it, the author alleges “lanolin is at most a weak contact allergen” and “Lanolin allergy is a myth created mainly by overzealous professional patch testers. No one has succeeded in sensitizing animals or humans to lanolin or wool wax alcohols.”

That being said, it’s possible that other ingredients mixed with it may contain GMO crops. For example, there may be oils from soybean, sunflower seeds, and other crops which potentially may be GMO. There’s no such thing as genetically modified cocoa beans, so cocoa butter should not be a concern for this.

The most disturbing thing…

…is not any of the points we discussed, rather it’s the country of origin.

China is the top exporter for “derivatives of wool grease” (i.e. lanolin), accounting for 27% of exports (9). While the US produces much of its own lanolin, its worth noting that 10% of global exported lanolin is purchased by the US. That may not sound like much, but remember we are only 4.4% of the global population, so if we’re using 10% of exported lanolin, it’s a lot relative to our population.

Even if it is coming from China, they’re supposed to be abiding by our government’s stipulated pesticide residue guidelines. Of course as we all know though, China isn’t exactly known for following rules!

Only you can decide whether or not you feel confident in using lanolin for breastfeeding. If you do though, common sense may say it’s a good idea to dampen a cloth with water and wipe your nipples off before breastfeeding (even though they say its unnecessary).

Also, whatever brand of product you use, it may not be a bad idea to find out exactly where they’re sourcing their lanolin from. Remember, when a cream is “made in the USA” it does not automatically mean all of the cream’s individual ingredients were made in the USA.

Lastly, after doing your research and weighing the risks vs. rewards, if you want to pay more for organic lanolin nipple cream in order to [hopefully] minimize its contaminants, that may not be a bad idea either. If for nothing else, the peace of mind it offers you may be worth the extra money.