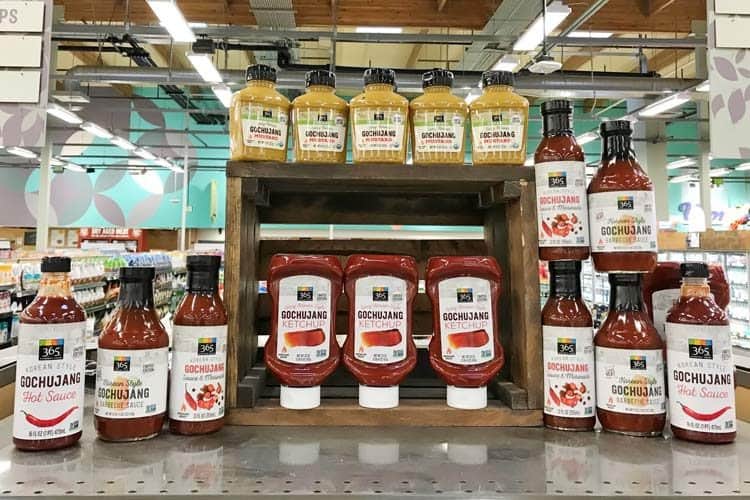 What Is Gochujang Sauce? It’s The New Sriracha

If there’s still a dispute as to whether or not sriracha has been de-throned as the latest “it” condiment, this end cap at a Whole Foods in LA definitively puts that question to rest. It has gochujang hot sauce, barbecue sauce, ketchup, mayo, mustard, and potato chips.

It’s officially the next big thing.

As with sriracha during the past decade, prepare to see everything flavored with this stuff. You’re already seeing it many places. Middle America will follow suit.

How do you say it?

Gochujang pronunciation is easier than it looks. You say go-chew-jang.

Because this foreign word can be intimidating, many restaurants simply call it Korean sauce or flavor.

A place like Buffalo Wild Wings might list Korean hot wings, rather than say the actual word. It’s just business, because people are less likely to order something they can’t say.

As with the pronunciation of sriracha, once the word catches on, menus will no longer be afraid to use it.

Gochujang is Korean hot pepper paste. It’s traditionally made with gochu (Korean red chili pepper), glutinous rice powder, meju (dried fermented soybeans), and salt. Sometimes a sweetener is added. After combining the ingredients, they are fermented in a vessel for weeks to months. The fermentation creates a deep-red velvety paste. It has a complex flavor that is spicy, sour, sweet, and salty. 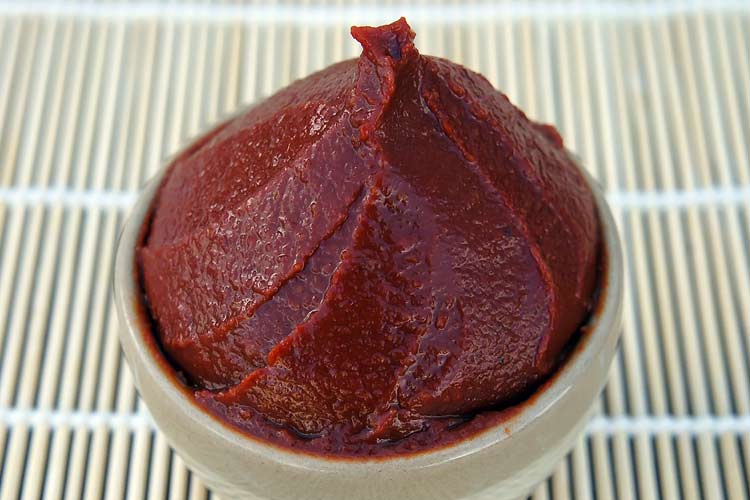 While many Western grocery stores sell gochujang sauce, it normally is a thick paste that comes in a tub. In Korean cooking, this paste is always mixed with other ingredients, similar to how miso is used. It’s never drizzled on top of food as one would with hot sauce or sriracha.

That being said, the lower viscosity sauce is what you see the most of these days. Count on that to continue, because we as Americans just love to drown our dishes with a sauce. 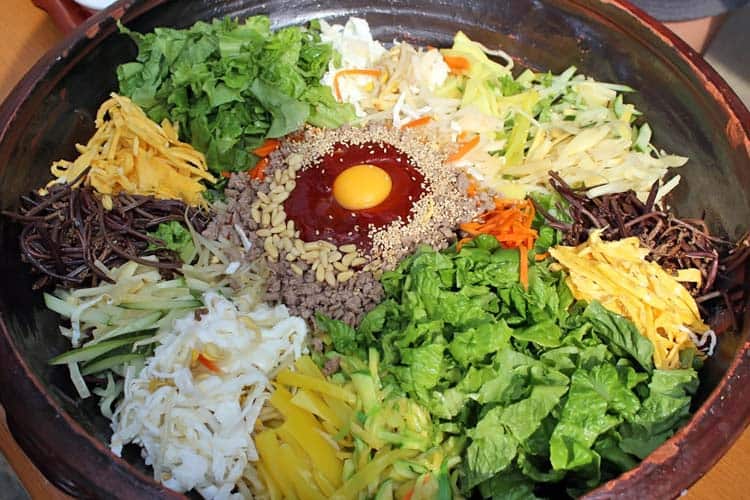 In Korean cuisine, when the paste is provided plain in a meal, it’s meant to be mixed in. Such as the case with an authentic bibimbap bowl.

Normally gochujang is vegan. It doesn’t contain fish sauce like kimchi. Some non-traditional, modern versions will sweeten it with honey and that won’t work for every vegan.

Usually gochujang is gluten free, but not always. Some recipes make it with yeotgireum, which is barley malt powder. The paste and sauce is gluten free when it’s made with glutinous rice. That’s just the more official name for sticky rice. Even though glutinous sounds like gluten, the rice doesn’t contain any.

The history of gochujang dates back to at least the 9th century. Black peppercorns were used prior to the 16th century. That’s when chili peppers, which come from the Americas, were introduced to East Asia by trade. 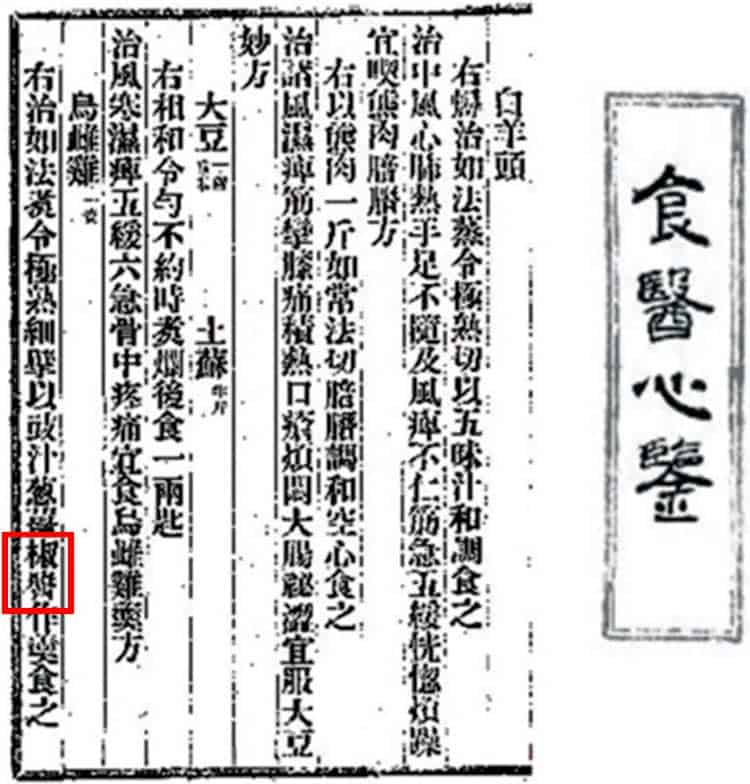 Outlined in red is the Chinese word chojang, which means the same thing as gochujang. This page comes from a book published in the year 850 AD titled Sikui-simgam (Book for Alimentotherapist). (1)

Since it’s made with chili peppers, gochujang sauce and paste will always be spicy. The intensity can vary from mild to extremely hot.

Most brands of gochujang sold in the US and Canada are labeled “Medium Hot” which equates to 45-75 gochujang hot-taste units (GHU). This measurement is similar to the Scoville scale, but it’s only used for Korean gochujang paste.

Your average gochujang will produce a lingering heat on the tongue, though it’s not a flavor that burns like habanero or ghost pepper sauce. Since it’s made with sticky rice powder and sometimes sugar, it’s more of a spicy-sweet taste similar to sriracha. The difference is that gochujang also has an umami flavor, thanks to its inclusion of fermented soybeans.

Paste form is the original recipe. Selling it as hot sauce is the most common way you will see it in the states. 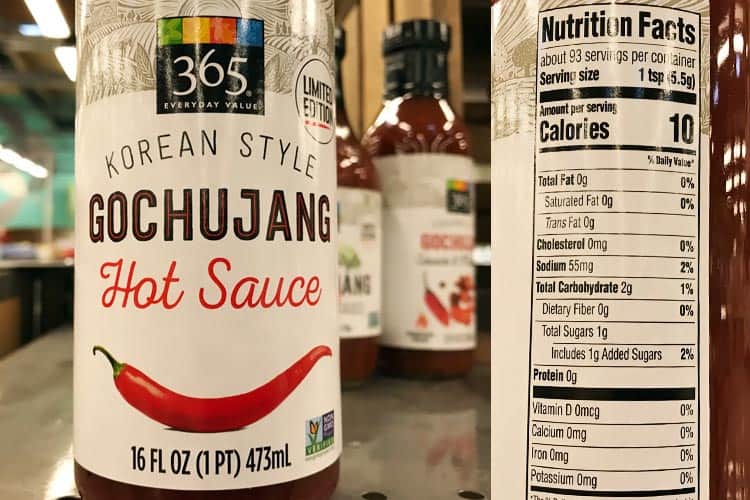 The gochujang nutrition facts list 10 calories per teaspoon. There is virtually no fat content. Since it’s plant-based, it’s cholesterol-free. The added sugars equate to only 1g per serving. With only 2g of carbs, it’s keto-friendly.

In many ways, gochujang is good for you. Since it’s normally oil-free (or contains very little) the paste/sauce will only contain a trivial amount of calories; typically 10 per 1 teaspoon serving. There will be sodium from the added salt, yet given the small portion size, the amount is not a major health concern.

Even though it’s sweetened and salted like ketchup, the difference is that the spiciness of gochujang will automatically keep your serving size in check. You won’t go overboard with it, like you might with fries and a bottle of Heinz. 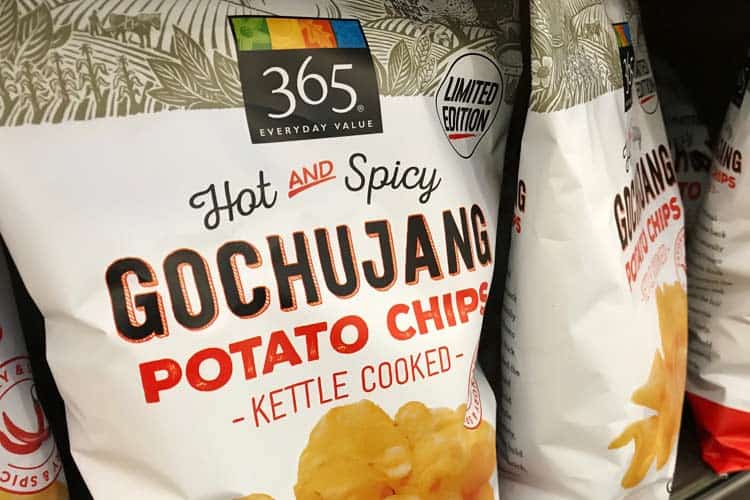 While the traditional paste is healthy, gochujang flavored foods may not be. Gochujang mayo will have just as many calories and fat as Hellmann’s and similar. The difference is that it will be spicy mayo. Likewise for potato chips.

Americanized versions tend to be watered down – i.e. sauce form – and this can mean you’re eating more of it. Exactly what they want you to do, right?! That’s fine, but just be aware of the sodium, sugar, and other ingredients you may not want in quantity.

Food allergy sufferers will want to be on the lookout for wheat and barley (gluten). Vegans might see anchovy/fish in some pseudo gochujang concoctions.

When made using a traditional recipe, side effects of gochujang will be no different than that of regular hot chili pepper sauce. The type of pepper used is a Korean cultivar of the same Capsicum annuum species. Burning in the mouth, heartburn, and stomach ache are the most common side effects.

Being allergic to gochujang paste or sauce is unlikely. If you are, then it means you have an allergy to chili peppers in general, since they’re all cultivars of the same plant species.

You can eat gochujang raw. There’s no need to cook it. While the capsaicin in chili peppers has natural antibacterial activity, after opening you should store the paste or sauce in the fridge. This is particularly important with sweetened versions because bacteria like to eat sugar, too. In a sealed container with refrigeration, the shelf-life of gochujang can be up to 2 years after opening.

Where to buy gochujang

You can buy authentic Korean gochujang paste in a small tub, comparable to a butter container. It’s typically red (or has a red lid) and can be found in the Asian food aisle, or the refrigerated section where you will find kimchi and fermented foods.

The most widely carried brands include Haechandle, Chung Jung One, CJO, and Roland. These are all made in South Korea. You have a decent chance of finding one at a Kroger, Meijer, Safeway, Whole Foods, Giant, or any other large-chain supermarket in a decent-sized city.

The American brand Annie Chun’s is shelf-stable and sold in a squeeze bottle. It’s not gluten free (contains wheat) though it is relatively close to the taste of a traditional recipe. Even many of the more downtrodden, smaller grocers will have Annie Chun’s in their Asian food section. 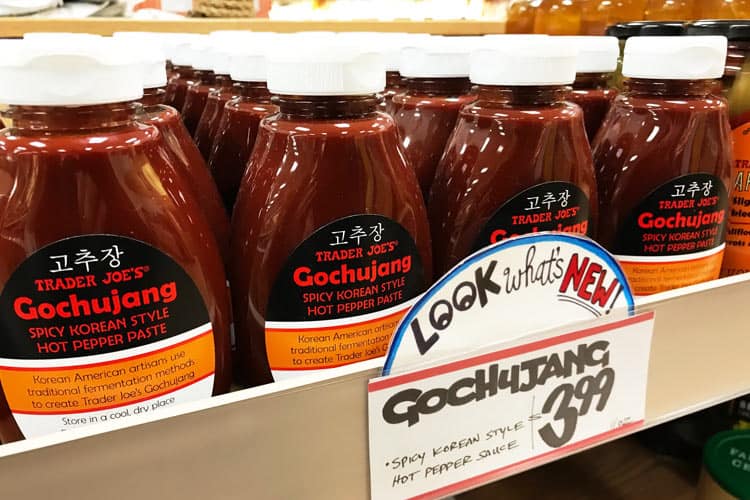 Trader Joe’s gochujang sauce is sold in a 14.3 oz bottle. It’s milder and the ingredients are soybeans, rice, sugar, red chili pepper, tomato paste, sea salt, and alcohol. Not authentic but it’s pretty close to the flavor and is very affordable. Unlike Annie Chun’s, the Trader Joe’s sauce is gluten free.

The bestselling brand in Korea is Haechandle. It’s medium-hot, which works for most people. There are no preservatives or artificial colors added. You can get it on Amazon.