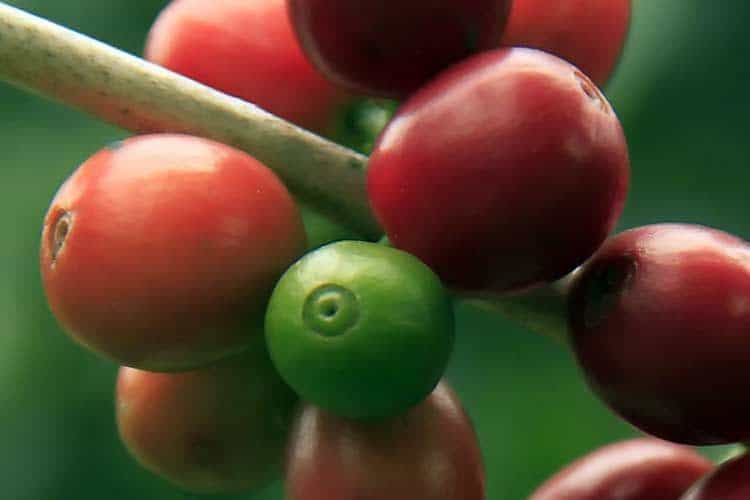 What is Cascara Coffee Cherry? A Starbucks Latte Gimmick

Here in Los Angeles, there are two types of people you will encounter who drink Frappuccinos.

Some call them for what they are – a naughty treat. They’re not lying to themselves or others about that. Most in this category only get them on rare occasion, not as a daily indulgence.

Then there are the folks we see sipping them all the time. Every time. Whip cream included. No surprise they’re twice the size.

Their waist, that is.

We’ve questioned a few and each have said something like it’s “not that bad for you” or “healthier than a milkshake.”

How many calories and grams of fat they have may not be the absolute worst. Actually for people who exercise regularly and eat an otherwise healthy diet, those things won’t even be a problem.

But sugar? That’s a pro-inflammatory problem for everyone, both skinny and fat.

An indulgent McDonald’s Oreo McFlurry has 64g of sugar in the regular size. You get 66g in a grande Caramel Frappuccino. Mocha is only slightly better at 61g. The sizes aren’t identical, but still.

Why some people think it’s okay to drink these weekly, let alone everyday, is mind boggling. 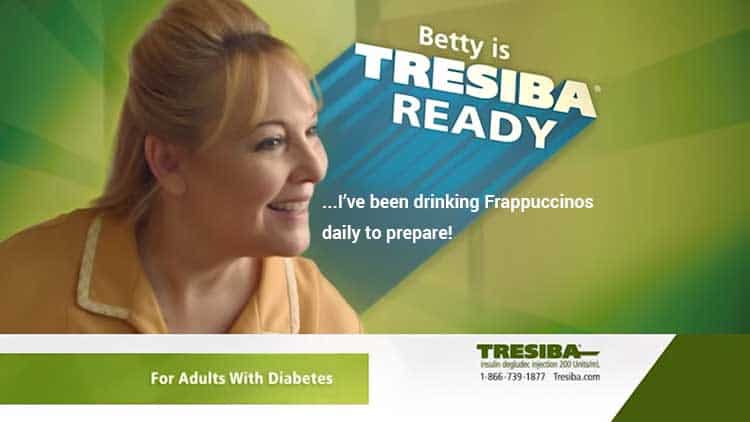 Because with that much sugar, type 2 diabetes may be just around the corner.

However the latest bamboozlement is the Starbucks Cascara Latte drink. They describe it as “subtly sweetened with cascara, the fruit of the coffee cherry.”

With a whopping 33 grams of sugar in the nonfat milk version, there’s nothing subtle about its sweetness. But this new exotic ingredient is not to blame. Just take a gander at the ingredients and you will discover the real guilty culprit…

In the future, expect to see this diabetic disaster syrup used for other drinks too, such as their hot and iced teas.

Starbucks ruined the fruit with boatloads of sugar, which you will see listed first in the ingredients for both the cascara syrup and the topping.

Prior to that abomination, this fruit was a superfood.

Coffee is a not a true bean, it is a stone fruit similar to an apricot, date, or cherry. As such, it is covered in a fruity flesh which gets discarded during production. That flesh is the coffee cherry, or cascara as its known in Spanish.

Before the brewed beverage, there were these juicy, red, and yes – subtly sweet – cherries which the beans were encased in.

With the exception of Colombia which is on the equator, in most countries where coffee is grown, there is only one harvest per year. After picking, they’re processed. 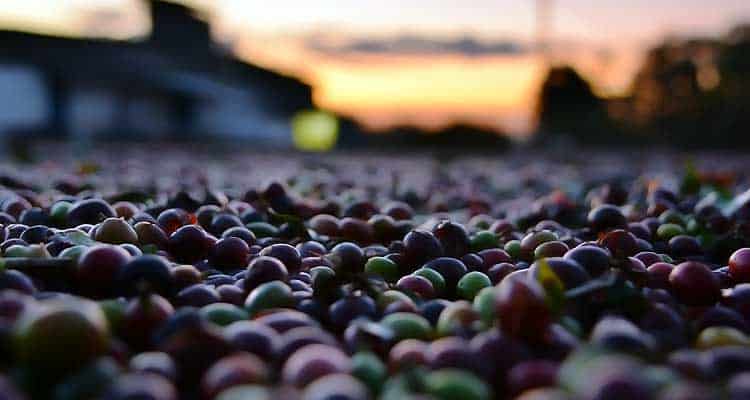 When they’re processed the old fashioned way – by air drying under the sun – the fruit doesn’t get removed right away. However most farms today use “the wet method” where the freshly picked fruits are immediately put through a pulping machine to remove the flesh and skin (husks).

Unfortunately, this perfectly edible fruit gets wasted, since only the roasted beans are used to make the drink.

Now please don’t confuse coffee cascara with cascara sagrada, which is an herbal laxative made from a North American buckthorn (Rhamnus purshiana).

If you want to poop, take that. If you want to be healthy, use organic dried coffee cherry husks in powder or syrup form, albeit without the sugar.

It puts goji to shame

They’re not even a high antioxidant berry, but since a lot of people think that about goji, let’s use it as a comparison.

The most extensive method for measuring antioxidant content is ORAC testing. 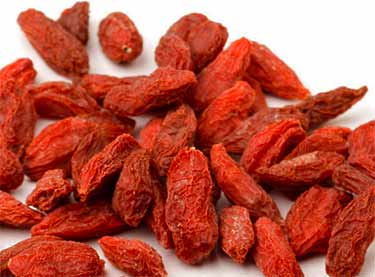 To put that value in perspective, here are the ORACs for the weight of some other red foods:

All are higher than goji, even your average apple!

Surprised? Or maybe you think the goji berries tested were a bad sample and the ones you buy are better?

Well, know that another group of scientists tested some very expensive organic dried goji berries, purchased from a high-end health food store here in Los Angeles; Erewhon Market. Those did test better, but only slightly so at 4,310 (1).

Disappointed? Don’t worry, you’re going to forget about all of the above foods once you hear how much antioxidants there are in cascara… 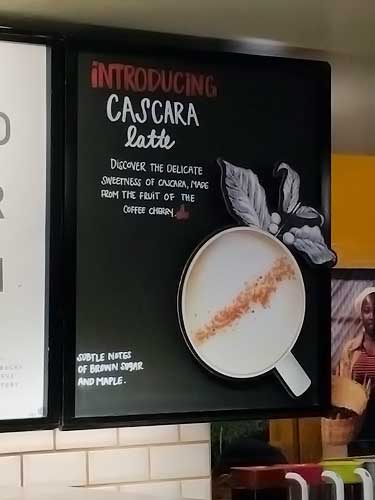 That’s the ORAC for raw coffee cherries which have been air-dried and then ground to a powder. It’s over 100x more antioxidant-dense than goji!

The problem with Starbucks cascara is that you’re not getting it in that form.

For one, you don’t even know how much coffee cherry Starbucks is using. Since they list sugar before the actual fruit extract, there’s no telling the amount you’re actually getting inside that expensive latte.

Secondly, the production method is not disclosed. The ORAC of 343,900 is for the dried powdered flesh. Right off the bat we can tell you that will have more antioxidants than fresh cascara coffee berries. This is because the water content has been removed to make the powder. As a result, the phytonutrients are more concentrated.

To give you an idea of how much water is in plants, compare these two ORAC values:

The dried is over 10x higher. Remember the ORAC measurement is for a 100 grams worth of a food, which is why 100 grams of dried basil is so much higher. 100 grams of fresh is mostly water.

Starbucks hasn’t clarified if they’re using the unmodified watery extract or the concentrated powder to make their cascara syrup.

But that would be for the pure coffee fruit. They’re using mostly sugar!

No one knows what kind of production methods were used to make their syrup, which might include intense heat like pasteurization. That would likely affect antioxidant content for the worse.

Lastly, you’re not getting 3.5 ounces of the berry extract per latte. Ultimately, the amount you’re getting may be as few as a couple hundred ORAC units per drink. Not impressive.

We haven’t even tasted the drink, nor do we intend to given that any drawbacks far outweigh the added benefit.

We can’t tell you its flavor, but here’s the verdict for the nutritional review:

As of now, that’s not on Starbucks’ menu. If it was offered in an unsweetened form, we would be totally down for it. Or for adding a pump of the syrup to a cup of tea or black coffee.

For now though, you have to make this beverage on your own. Luckily, that’s pretty easy to do.

How to make coffee cherry tea

You can make it with a chemex, but we prefer an easier way – brew a couple scoops of the powder in the same way you would for ground bean.

If you don’t mind some grittiness and want the healthiest option (with all the phytonutrients intact), then simply dilute a teaspoon of the cherry powder in hot water and drink unfiltered.

For something in-between, we recommend a Bodum French press. 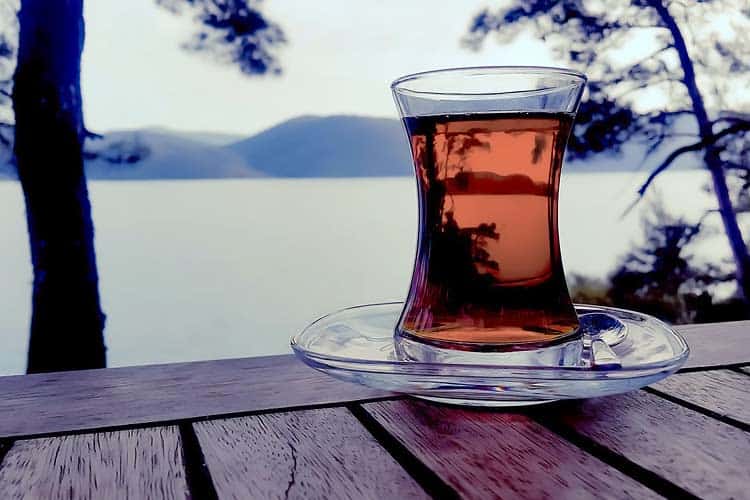 At around 10 calories per serving, this low sugar tea can be made in 5 minutes.

Step 1: Add water and place filter in coffee maker.
Step 2: Add cascara powder, use more if desired.
Step 3: Brew as you would coffee.
Step 4: Pour in mug and add sweetener and spice, if desired.

You can also make this with the more common Cassia cinnamon, but we advise against doing so given the side effects.

You can also drink it cold, like an iced tea.

Does it have caffeine? Yep. Whether it was air or freeze-dried, the powder will have about 1/10th the caffeine content versus Arabica beans of equal weight (2). A perfect amount for an afternoon pick-me-up.

If you forgo the monk fruit, this recipe won’t taste as sweet as the crap Starbucks is making. The sweet flavor of the unadulterated coffee berry truly is subtle, a cross between hibiscus, rose water, and watermelon.

Where to buy coffee cherry tea? Whether whole or crushed, you’re unlikely to find these dried berries at your local supermarket. We have never seen them for sale at Whole Foods. You can buy it online at places like Amazon. Your best option is the Nicaragua Los Congos Pacamara bulk tea in a 5 lb bag.