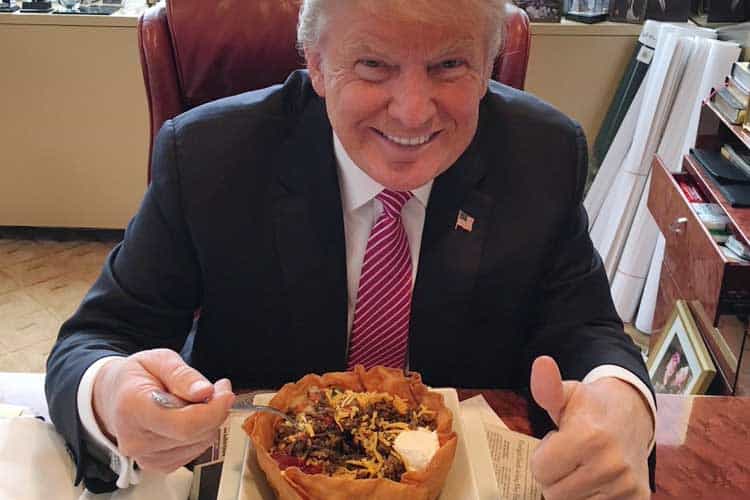 What Donald Trump Eats is a Disaster, Personal Health Good?

What may be his favorite word is disaster. He uses it to describe just about anything he dislikes. In fact, he loves the word so much, you will sometimes hear him use it twice in the same sentence.

However, Trump does not use that word to describe his diet (we do, but he doesn’t).

Instead, he uses interesting phrases and logic in justifying his favorite foods and how he eats them. He has talked about eating food “carefully” (what that means or how it improves nutrition, we don’t know). In a CNN interview a few months back his rationale for fried chicken was relative to other foods (1):

“The other night I had Kentucky Fried Chicken. Not the worst thing in the world.”

That statement is true. It is not the worst thing in the world. Perhaps a stick of pure butter would be worse.

Because at least butter won’t have acrylamide from frying. It will also have far fewer mutagenic advanced glycation end products which are primarily created during the high heat cooking methods involved with chicken (whether that be fried or grilled).

Sure it’s pure fat, but a stick of butter will be about 810 calories. We have no idea what type and how many pieces of chicken Trump actually eats, but upon playing around on the KFC website, it appears just about any combination of the colonel’s recipe is going to have an absurd amount of calories and fat, too.

So for us personally, we actually would opt for the butter stick as being the better choice. 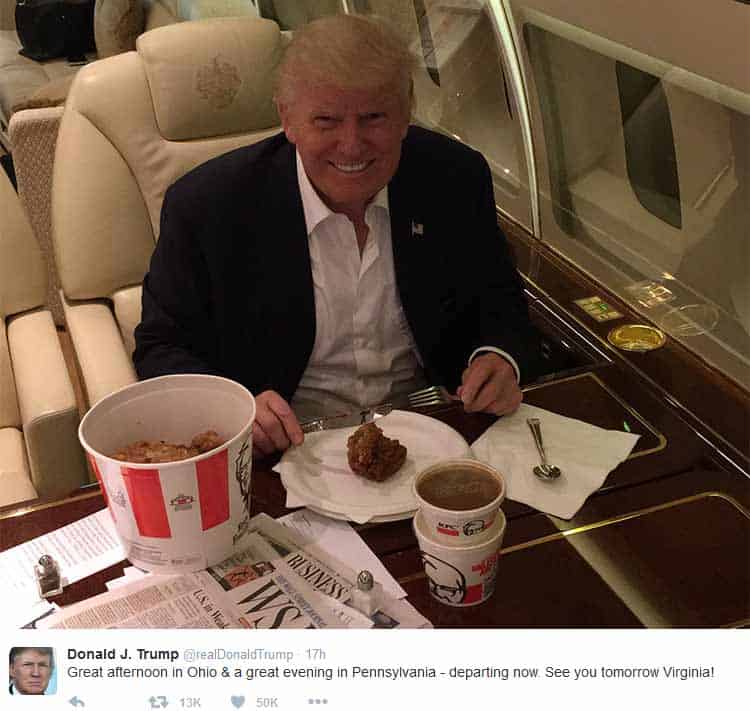 On August 1st he tweeted a pic of himself chowing down on KFC while departing from Pennsylvania. On the burl wood tabletop of his private plane is a huge bucket of friend chicken, along with what appears to be mashed potatoes and a tub of gravy.

Food choice aside, notice anything else unusual in this photo? Check out the silverware he’s using to eat something which is normally a finger food.

Does Trump not eat with his hands? 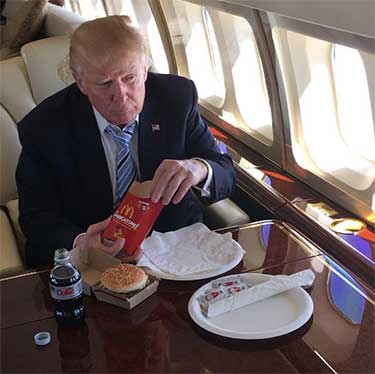 Posted on Instagram, this was the closest we could find, but you don’t actually see him touching the fries. Did he really touch them or is this a pose?

Try googling photos of Donald Trump eating food and you will be hard pressed to find evidence of his fingers actually touching the food.

Sure, there are a few where he almost touches it, such as holding a hot dog on a stick, an ice cream treat, or a slab or ribs that’s wrapped in paper (carefully, we assume). But finding any where his fingers literally touch the food is a challenging task, or at least for recent pics.

According to Eater, a Pizza Hut commercial he did in 1995 “may have been the last time Trump touched food with his bare hands” (2).

Based on the context of the article, we assume they’re implying the last time a photo was taken of him doing so, not the literal last time he ate food with his hands.

Obviously he touches food, but given how much he loves McDonald’s, why aren’t there photos of him eating French fries? Or does he use a fork for those too? 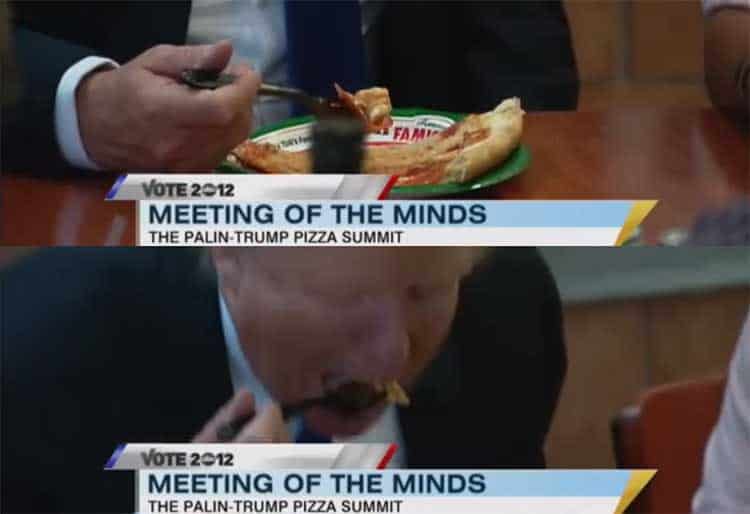 If you think this is just coincidental, all you have to do is look at this photos and video of Donald Trump and Sarah Palin eating pizza. That was back in 2011 and yes, he was eating pizza with a fork and knife!

He posted a YouTube response as to why that was…

Even though his response is a minute in length, it almost seems like an answer that’s a non-answer to the question. He claims:

“A lot of people are asking about why am I using plastic forks and knives that the pizza parlor gave. Well, I don’t walk around with forks and knives and frankly, it was very comfortable. Plus this way you can take the top of the pizza off and you’re not just eating the crust. I like not to eat the crust so that we keep the weight down, at least as good as possible.”

His initial statement would have worked if the question was why he didn’t bring his own silverware, but that’s not the weird thing going on here… it’s why he’s using forks and knives, regardless of what they’re made of, to eat a friggin’ pizza! It couldn’t have been that messy either, given that Sarah Palin seemed to have no problem using her hands for it.

And if he’s going to be concerned about the crust, can’t you simply just not eat that part, even if you are eating it with your hand?!

Ironically, in his 1995 Pizza Hut commercial, not only does he eat the crust, but he eats it first! 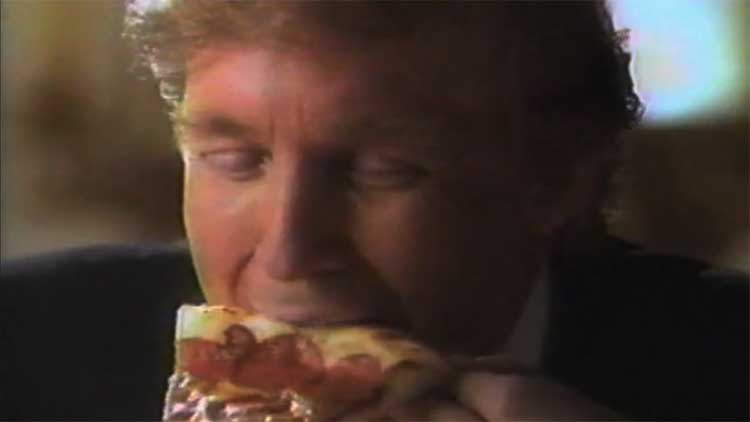 If crusts (i.e. bread) are such a problem, then why does he eat the “Fish Delight” from McDonald’s, which is allegedly his favorite meal there (3).

Oh wait, there’s not even anything on McDonald’s menu called “Fish Delight” so in actuality, we have no clue whether his favorite McDonald’s item involves a bun or not.

But if it was the Filet-O-Fish, then it definitely involves a big fat bready bun.

Why does he love fast food?

There is actually some legit logic in Trump’s explanation as to why he prefers fast food joints versus unknown restaurants. As he mentioned in the February Town Hall in Columbia (4):

That is a good point he makes and regardless of your opinion of their food, the supply chain management and kitchen procedures at McDonald’s are more stringent and safer from food poisoning, statistically speaking, than a random mom ‘n pop restaurant.

…and I think you’re better off going there [McDonald’s] than, maybe, someplace that you have no idea where the food’s coming from. It’s a certain standard.

I guess that all depends on what’s more important to you. Slightly higher odds of food poisoning from “someplace you have no idea where the food’s coming from” or eating healthier food from a mom ‘n pop, even if statically, it might be more dangerous on average. 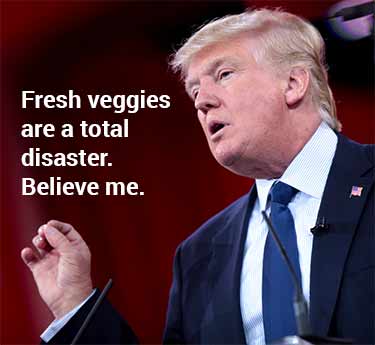 photo by Gage Skidmore (we did the quote)

No, the taco salad from his Cinco de Mayo tweet hardly constitutes a photo of a salad. We see mountains of beef, cheese and sour cream. If there’s any lettuce hidden in there, we can’t discern it.

Plus, everyone knows a taco salad is just an excuse to eat tacos in a different form and pretend you’re not.

We spent a fair amount of time on Google trying to find a photo of Trump eating a regular salad – whether that be romaine, kale, baby greens, anything green – and we came up empty handed.

Technically, Donald Trump does eat vegetables. There’s the mashed potatoes from his KFC and the fries from McDonalds (though we’re guessing he might eat those with a fork). However in terms of fresh and what most people would consider to be healthy veggies and fruits, there isn’t photographic evidence we can easily find online.

This is pure speculation on our part and we might be completely wrong, but we wonder if this also has to do with cleanliness? After all, cooked veggies are definitely safer from germs than fresh, though unfortunately, much of the nutrition like vitamin C and various phytonutrients are destroyed by the heat, too.

There’s no evidence to suggest he has bad health. He has never had a heart attack or stroke. For a 70 year old man, he’s definitely energetic and can think quickly. Maybe even too quickly, based on some of the quick gaffes he has shot back with.

As you may recall, last December Trump released a letter from Dr. Harold Bornstein, who has been his physician… 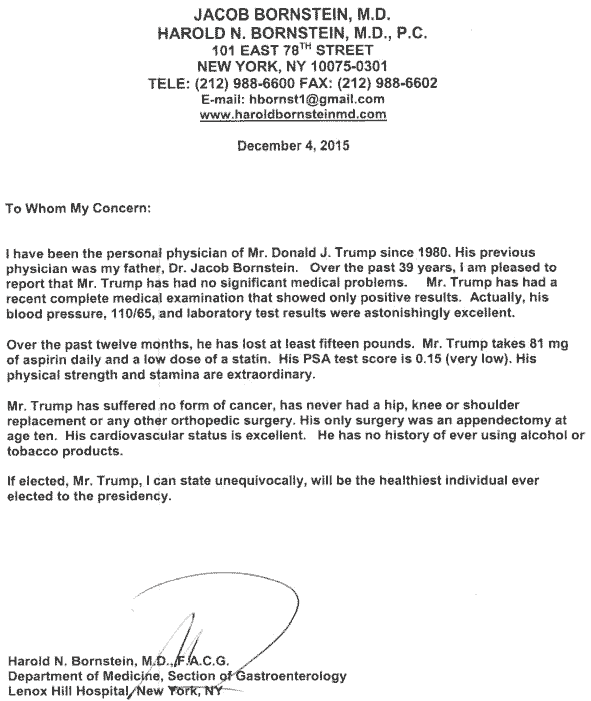 This letter had created a lot of controversy because of the language used. According to another physician CNN interviewed to comment on this doctor’s letter (5):

“Trump’s medical statement is unusual in how its author, like the candidate himself, combines vagueness with utter certainty.”

She seemed surprised a doctor would use descriptions like “astonishingly excellent” and the grandiose statement that he would be the healthiest individual ever elected. She talks about how far fetched that claim is to make, since no one (other than God) could know the personal health of every U.S. president throughout history for a comparison.

Controversy aside, his blood pressure is good. Though it would be nice to know numerical data on his health and lab results, rather than generic statements like “astonishingly excellent.”

One thing we agree is healthy about his diet

Donald lost his brother due to alcoholism. As a result, he has not had a drop of alcohol in his life. Nor has he smoked cigarettes or used other tobacco products.

Whether you love the guy or hate him, the truth is that even moderate alcohol consumption is a major health problem that is the elephant in the room which everyone chooses to ignore. Because let’s be honest, drinking can be quite fun.

Everyone gangs up on big tobacco, but we turn a blind eye to the facts about alcohol…

It’s a “major” carcinogen and not just for liver 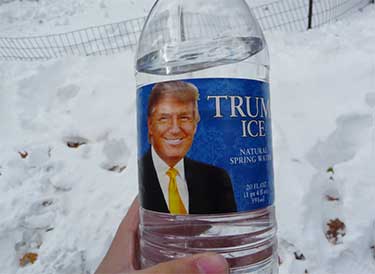 They say it’s “one of the purest natural spring waters bottled in the world” but we say this or any other water is better for your health than booze. photo credit: Juliana Lopes on Flickr

According to both the World Health Organization and U.S. Department of Health & Human Services, alcohol is a carcinogen. It increases risk for colon and rectum cancer. The National Cancer Institute says it’s a “major risk factor” for head, neck, and esophageal cancer. Over 100 studies have “consistently found” it to increase the risk of breast cancer. Worldwide, 3.6% of all cancer cases are caused by alcohol (6) (7) (8).

It’s not just moderate consumption or alcoholics that need to be concerned, either.

As the research shows, even one or two drinks is not healthy for your brain, regardless of how you try to spin it. No, the minuscule amount of resveratrol in your red wine is irrelevant when compared to the adverse effects occurring in your brain.

Hey, we wish it weren’t the case too, but the facts are the facts. It’s the reason we say organic food is a scam, or much less important, relative to most other dietary decisions in life.

Maybe the alcohol-free lifestyle is why Donald Trump remains so mentally sharp for a 70 year old. Even if you totally disagree with what he thinks and says, his brain does seem to be in great health.

On the other hand, his mental health, well that is a topic for another time.