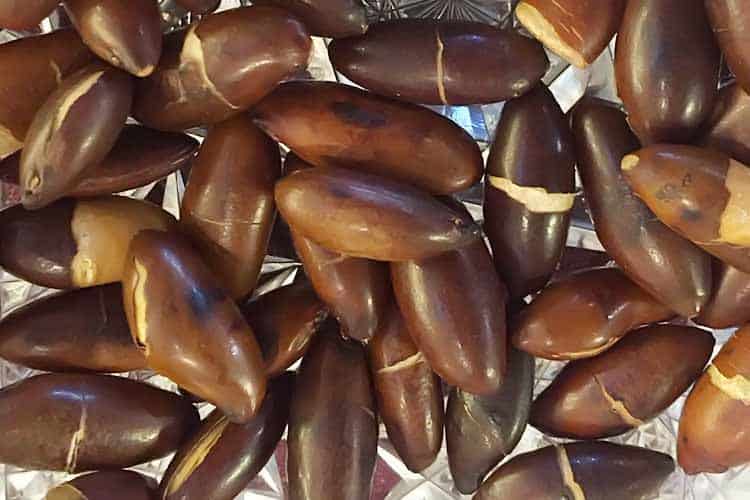 If you haven’t heard of them yet, get ready to. Within the category of nuts and seeds, we are willing to wager the baru will become the next big superfood in future years.

Though as of today, hardly anyone knows what a baru nut even is! You won’t find them at Trader Joe’s or even Whole Foods. They are available on Amazon though.

Also called the baru almond, this legume comes from the Dipteryx alata tree. Other monikers it goes by include cumbaru, camaru, barujo, and coco-feijão.

The reason you haven’t ate one before is because they’re not grown in the United States. They’re only found within very specific climates of South America; the Cerrado savannah in Brazil and parts of Bolivia.

To further add to their rarity is the fact that this large species of tree is classified as vulnerable according to the IUCN Red List of Threatened Species.

Out of their classifications, “vulnerable” (yellow) is just one notch better than “endangered” (orange). Less than 2% of plant species worldwide have the vulnerable stamp, which makes you really take note of it. 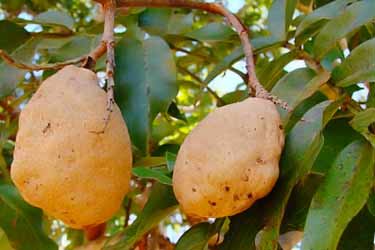 The fruit of the baru tree, the seeds are inside. photo credit: João Medeiros on Flickr

In fact, it’s really the only potential road block we see in preventing this from becoming a mainstream superfood. If production can’t be increased, then the more mainstream superfood companies won’t bother selling it. The current limited supply compounded with high costs means it won’t make much financial sense for them to sell it.

Hopefully, increased demand will lead to more farms growing it. That would actually benefit the species.

The baru tree is quite large, growing up to 80 feet in height. The nuts come from the fruits which grow on it.

Only 5% of what’s inside are the seeds, the rest is flesh which tastes sweet and is eaten by locals. As far as you tasting the fruit, sorry but you won’t find exports of it at your local supermarket. You will have to visit Brazil to experience it fresh!

What does a baru almond taste like? Delicious, but as is the case with most nuts, describing their flavor is not always easy. Many compare it this one to the taste of a sesame seed.

Should you eat them with or without the shell? Both are an option, but we recommend keeping the skin on as that is where much of the antioxidant content is located.

Some people shy away from nuts because of their high fat content, but they really shouldn’t.

Not all, but many nuts have ample amounts of the good fats, like monounsaturated. Despite their caloric density, there is actually a fair amount of research supporting the theory that they increase satiability after eating them (which in turn, means you may eat less during the rest of the day). There have actually been randomized, controlled clinical trials about this (1).

The healthiest nuts are those which are rich in protein, high in antioxidants, have phytonutrients, and contain lower amounts of the bad fats. The omega 3’s in walnuts and high BCAA content in pistachios rank them among the best. Macadamia and Brazil are some of the worst. You may be surprised to hear how easy it is to overdose on Brazil nuts due to their high selenium content.

So how does the baru rank among those we’re accustomed to eating? Review the nutritional values for yourself.

Something that really stands out as unusual here is how it’s a low fat nut relative to most others. Only 26% of the calories are coming from fat which may sound high, but consider that pecans are 93%, almonds are 78%, and cashews are 67%. With the exception of chestnuts at 10%, all other common nuts get at least 2/3 of their calories from the fat content.

And while there’s no such thing as a low calorie nut, the baru certainly isn’t high calorie like macadamia and Brazil nuts.

Protein and minerals vs. other nuts

One of the biggest health benefits of eating nuts is that many are an excellent source of plant based protein. How much protein is there in baru nuts and how does it compare to the others? Take a look at them side by side…

First of all, it’s important to point out that nuts should not be considered a primary source of antioxidants.

So while it is true that many nuts are an excellent source of antioxidants, you’re eating a lot less of them relative to fruits and vegetables. 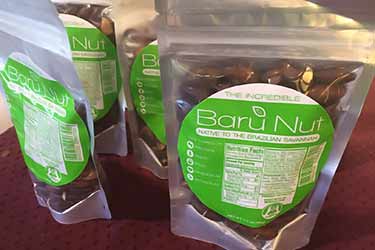 What is the ORAC value of baru nuts? Being such an uncommon nut, we are unable to locate anyone who has measured it.

Though we did locate an article in Food Research Journal from several years ago: “Consumption of baru seeds [Dipteryx alata Vog.], a Brazilian savanna nut, prevents iron-induced oxidative stress in rats” (2)

They did not measure how much antioxidants there were using ORAC, which is the most accurate method. But they did check antioxidant activity using two other good methods; FRAP (ferric reducing antioxidant power) and DPPH (diphenylpicrylhydrazyl) assays.

“…found higher total levels of phenolic compounds in the peeled and toasted baru nut than in others nuts, such as Brazil nuts, almonds, cashews, pine nuts, and macadamia nuts.”

Among those other nuts listed, the one with the highest ORAC value is almond (4,454). Therefore, even though we do not have an ORAC reading for it, we can predict that baru nut has a value of more than 4,500 but less than 7,675, which is that of pistachio. We say this because pistachio, hazelnuts, walnuts, and pecans were not called out and they all rank higher than those which are listed as being below baru.

While there are many health benefits of baru nuts, there are also a couple downsides. Not to do with your health, but rather the challenges of incorporating them into your diet on a regular basis.

Limited availability – If you’re in SoCal (like us) you may find them at some Whole Foods and health food stores like Erewhon. But these aren’t the type of nut you can buy at Walmart or Kroger. Trader Joe’s doesn’t sell them either.

Cost – These are not cheap. The price per ounce seems to be even a bit higher than sacha inchi. If you currently buy those locally at a brick and mortar store, then you already know how some stores will price them through the roof. As of the time of this review, the cost of baru at Erewhon for a 3.2 ounce bag was about 30% higher than the going rates we saw online for the same brand. Of course pricing constantly changes, so sometimes you get a better deal in-store (if you can find them in-stock). But given how niche of a product these are, we don’t foresee food co-ops or health grocers having much of a motive to keep their pricing low.

Potential allergen – If you have a peanut allergy, you may not be able to eat baru nuts. That’s according to a brand rep we encountered at a health food store in LA who was providing samples of the nut to taste.

Those aside, the baru is a protein-packed powerhouse of antioxidants that’s very healthy for you. Here are the ones we buy for sale on Amazon.