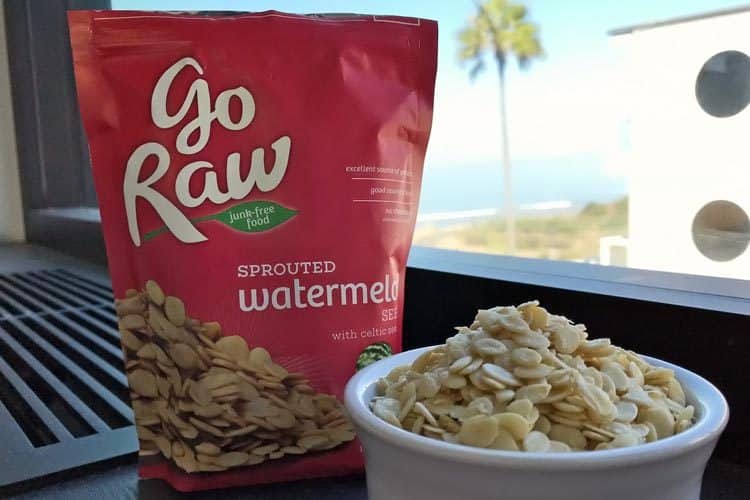 Peanut, almond, and cashew are nut butters you can find at Walmart. You probably have to turn to Whole Foods, or a healthy co-op grocer, to get pumpkin seed butter, pecan butter, and other exotic varieties.

Regardless of where you shop, one you probably haven’t encountered is this one.

Is it good to eat watermelon seed?

Yes, but only watermelon seeds which are sprouted and shelled, in order to remove the black protective coating. Otherwise they can’t be digested and aren’t good for you; GI distress may result. After de-shelling, the seeds become edible and healthy to eat.

Nutritional benefits of watermelon seed include 27-35% protein content by weight, high amounts of the B vitamins niacin and thiamin, and the essential minerals iron, magnesium, manganese, phosphorus, potassium, and zinc. There’s no vitamin C, but nuts and seeds generally don’t contain any. (1) 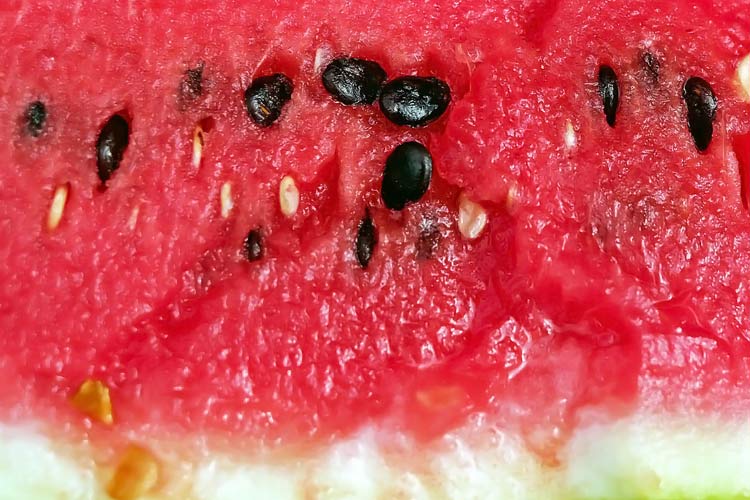 If you eat watermelon seeds straight from the fruit, they’re not going to grow inside your stomach. That myth was probably started to deter children from swallowing them and choking or getting sick. You will probably stomach ache from intentionally eating a lot of them, but swallowing a few raw seeds is harmless and without side effects. They will pass through your digestive tract intact.

Why aren’t they used more in foods?

First and foremost is lack of demand. People don’t think of them as a food, like they do with seeds from pumpkins, sunflowers, etc. As such, there’s little financial incentive to produce them, given that the demand just isn’t there [yet].

Though once you try this superfood, you probably will be hooked. Especially considering that it has more protein per calorie than common nut butters like peanut (which is technically a legume), almond, cashew, hazelnut, walnut, etc.

Since watermelon is a rare food allergen, its seed butter can serve as an excellent alternative for those who have tree nut allergies. Watermelon seed butter works as a good replacement for tahini, which is made from sesame seeds. Those are a relatively common allergen. (2) 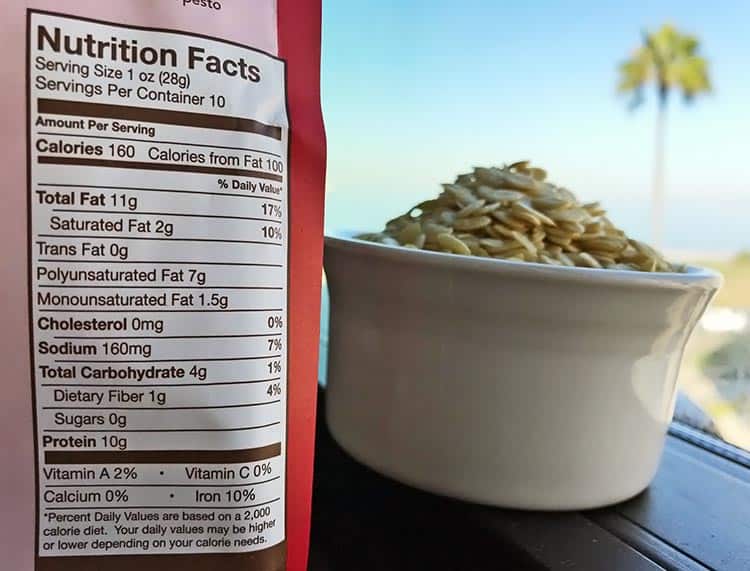 Note that the sodium content reflected above is from added Celtic sea salt. Unfortunately Go Raw does not make a sodium free version, nor do any other major manufacturers of the shelled version. You can get Go Raw on Amazon.

Assuming no oil or water is added, the nutrition facts for raw watermelon seed butter will be comparable to the seeds. 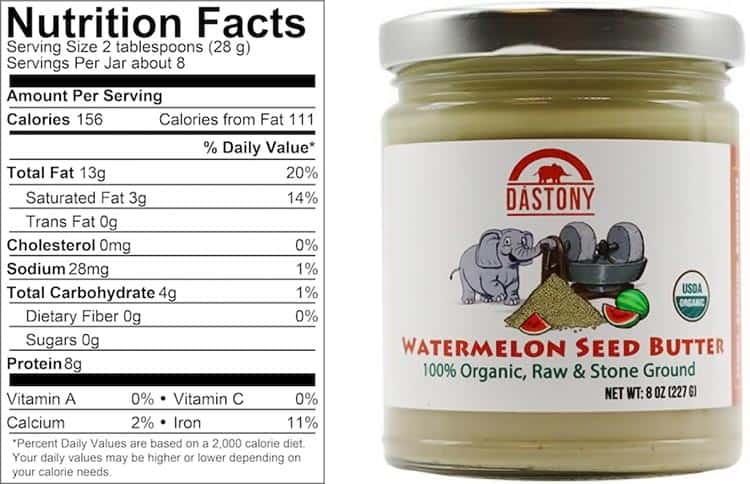 Dastony is raw and organic. They don’t add salt or oil. The ratio of fat to protein does differ slightly. This is not surprising, as cultivars of the Citrullus lanatus plant are known to have nutrient profiles which differ somewhat more than typical.

Unlike the red fruit which is almost entirely made of sugars, the seeds have almost no carbohydrates. As with pumpkin and sunflower, they are made of fat and protein. Definitely keto diet friendly.

Several articles cite the USDA National Nutrient Database report #12174, which is for the dried seed kernels. The black shells were intact when those measurements were taken. Technically the shells are edible, but they need to be roasted or baked. (3)

An agricultural university in China published a report which breakdowns the amino acid content in seeds with the shells removed. It’s a more accurate representation of what you would encounter when eating raw watermelon seed butter or the whole seeds. (4)

Unlike the amino acid profiles of rice, whey, and pea protein, watermelon seeds are an extremely rich source of L-arginine. They are also among the top L-citrulline food sources.

The latter is a rare, non-essential amino acid which isn’t normally reported in standard amino acid profile. Your kidneys convert L-citrulline to L-arginine, so the two are closely related and have similar biological effects.

Arginine plays a vital role in the synthesis of nitric oxide (NO) in the body. This chemical is essential for cardiovascular health.

Furthermore, boosts in blood levels of NO are believed to benefit bodybuilders and men suffering from erectile dysfunction (ED). Makes sense, since both could benefit for increased blood flow. (5)

Risk of heart disease and vascular disorders is also correlated with having healthy nitric oxide levels. (6)

Given the unique cardiovascular health benefits of L arginine and L citrulline, watermelon seeds and butter made from them are true superfoods which don’t have direct competitors. Even the best nuts to eat can’t hold a candle to the amounts for these specific aminos.

While arginine is a commonly found amino acid in both animals and plant-based foods, L-citrulline is not.

The advantage that L-citrulline has is that it may work even better than direct arginine supplementation.

Studies have found that when you eat the precursors to arginine, which is citrulline, you may boost your arginine levels even more. For whatever reason, it appears the kidneys are efficient at converting it, more than they are at metabolizing arginine. (7)

How to make watermelon seed butter

A watermelon seed butter recipe is more complicated than a common nut butter. You have to sprout the seeds or shell them. The latter requires special machinery and cannot be done with your hands or standard kitchen equipment.

You can roast the black-coated seeds to make them edible, and then proceed with making the butter in a food processor or good blender. Yet the drawback is that it will no longer be raw.

If you want to make organic raw butter with watermelon seeds, the easiest way to do so is to buy them with the shells already removed.

As with all raw seeds and nuts, after you make them into butter, you will want to consume within a few days. Without proper jarring, bacteria and fungi will begin to manifest after a week or so.

It doesn’t taste anything like the red fruit. Watermelon seed butter is very similar in flavor and creamy consistency to tahini. Some liken it to the mildness of cashew. Because shelled watermelon seeds have a rather neutral taste, they work great in all recipes where you want to add a velvety delicious fat.

Where to buy watermelon seed butter 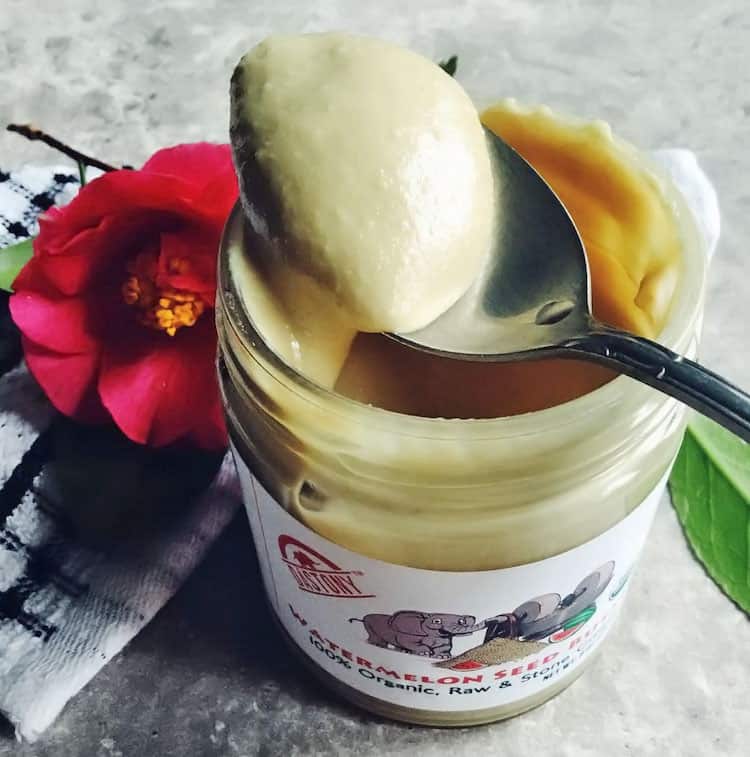 It’s probably the hardest seed butter to find for sale. Living here in Los Angeles, you would think the high-end natural grocers would carry it, yet they don’t. Erewhon, which has several locations here, carries the Dastony brand but not this type.

Only two brands sell watermelon seed butter; Dastony and Sakara. The latter has not manufactured it in quite a while and it’s unclear if they’ll bring it back. At the time of this review, Dastony watermelon seed butter was out of stock on Vitacost and even Dastony’s own online store doesn’t sell it direct (yet they have an informational page for it). It is available on Amazon through third-party sellers.

Given that it’s not cheap, you may want to stick with snacking on Go Raw’s seeds, just as we do.