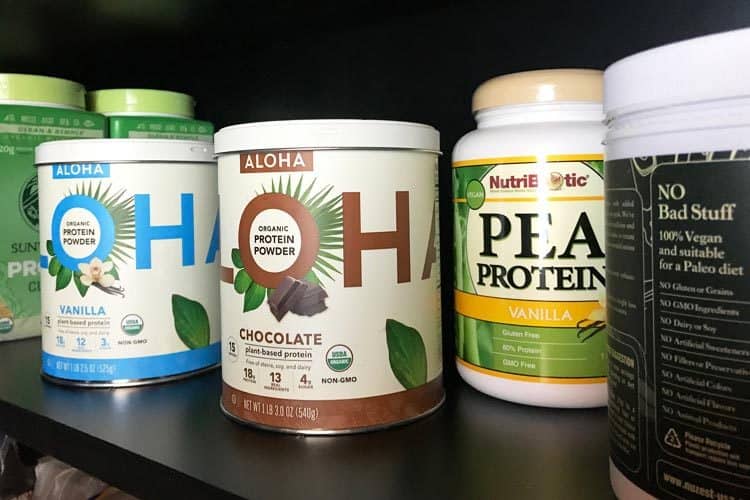 Long gone are the days of whey or soy being the only options.

Now there seems to be more plant-based proteins on the market than there are for dairy-derived.

Most use stevia, not monk fruit extract.

Even though it tastes nasty, that’s not the reason we avoid stevia.

You should not eat it because it mutates your DNA.

Yes, it may be a natural sweetener, but it’s not healthy.

Both the FDA and the World Health Organization set the acceptable daily intake (ADI) of stevia at the equivalent of just 9 packets per day. (1)

Sucrolose (Splenda) and acesulfame potassium (Ace-K) are both set at 23 packets daily.

So why does stevia have the lowest RDI?

Because during digestion, gut flora convert stevioside into a mutagenic substance.

As early as 1985, this side effect has been documented in rats. While many assumed humans would do the same, it wasn’t formally tested in a clinical study until just a few years ago.

In 2016, ten men were tested and the results were not good:

This was published by the World Health Organization and it’s why they refuse to raise the ADI beyond the 9 packets per day equivalent. (2) (3)

If you’re not familiar with how DNA mutations work, they are permanent.

Unlike DNA damage, which most of the time is repairable by the body.

DNA mutations are responsible for cancers (all start from a mutation), accelerated aging of the skin from sun exposure, and the list goes on.

In short, mutations are bad and you want to minimize them.

But what about that other natural sweetener, monk fruit? 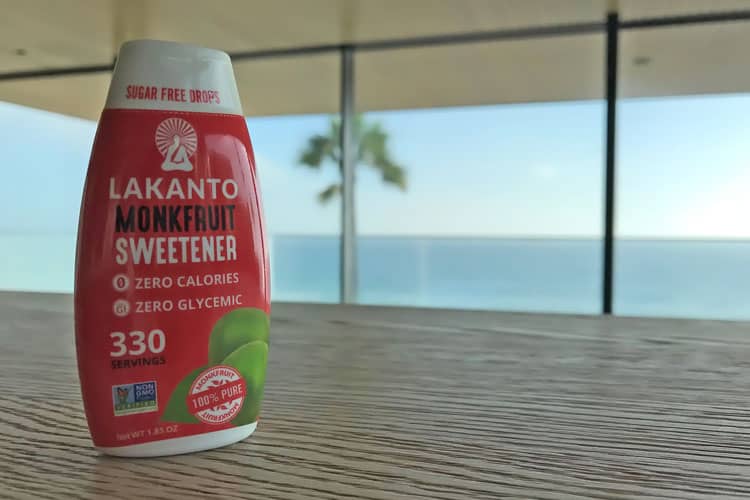 Also known as luo han guo, not only is it the best tasting sweetener, but it also seems to be the safest.

Unlike stevia which has that 9 packets ADI, the FDA does not set an ADI for monk fruit consumption.

Why? Because (1) it’s not mutagenic like stevia, and (2) studies using even high amounts have failed to demonstrate adverse side effects of any kind.

As vegans, we personally won’t buy brands like Vega, Kos, or Garden of Life powders since they’re made with stevia.

We only buy those sweetened with monk fruit or unsweetened, because those are the healthiest options.

With many of the reviews you see on blogs, one has to question whether or not the author has even used the product they’re touting.

They just spout some generic factoids, without offering evidence of even using it.

Well, how’s this for evidence… 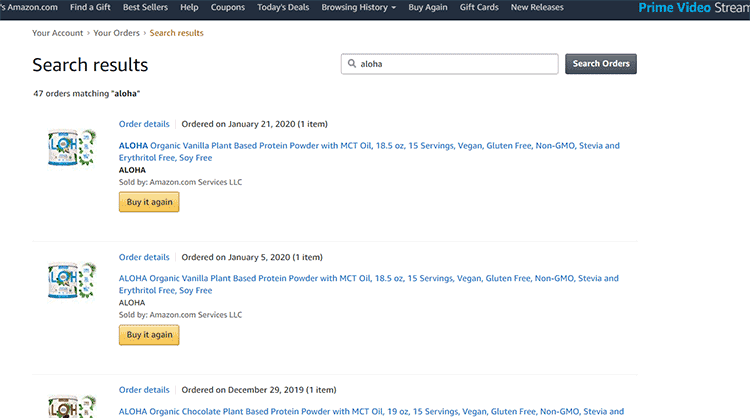 That’s a screenshot from our Amazon order history. Clearly, we have a lot of experiencing using this vegan protein powder on a regular basis. In fact, we typically use it 5x weekly.

The reason Aloha is the best monk-fruit sweetened powder is because it’s organic, tastes great, and uses a synergistic combo of plant-based proteins; pea, brown rice, hemp seed, and pumpkin seed. This creates a complete amino acid profile, including healthy amounts of the BCAAs for muscle repair and regrowth after workouts.

Pure pea protein has a smooth creamy texture, but its drawback is gas and bloating if consumed in large amounts. Rice doesn’t cause that, but it does taste like chalk. The advantage of these vegan sources combined is that you get excellent texture, along with easy digestibility. 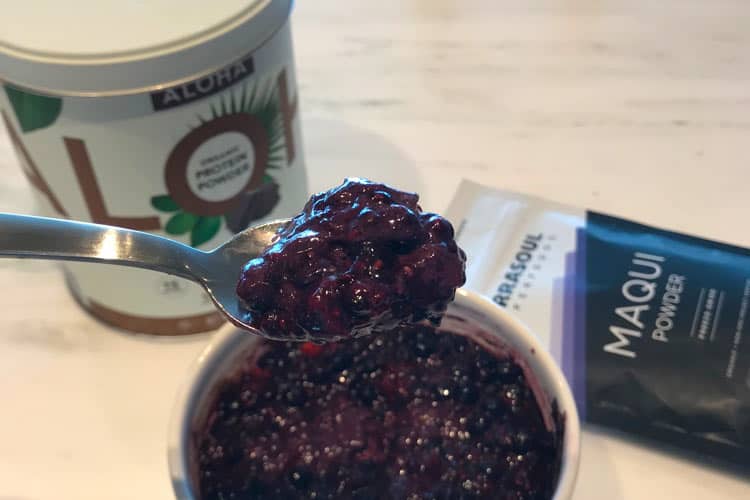 We use it to make an afternoon pudding with berries and antioxidant-rich maqui powder.

Aloha comes in chocolate, vanilla, and banana. Among them, vanilla is our favorite. However if you’re a chocoholic, go with that.

Each flavor has comparable nutrition facts. The vanilla Aloha offers 18g of protein for 120 calories.

If you haven’t tried Aloha yet, you definitely need to. If you tabulate the different brands of vegan protein we’ve had in the past few years, it has got to be 50+ and we keep coming back to Aloha as a favorite. Get the vanilla on Amazon or the chocolate. 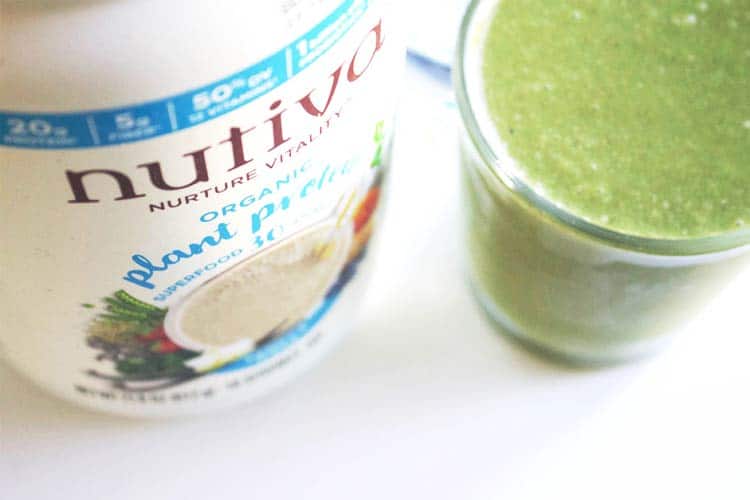 You know the brand Nutiva because of their flagship food; hemp seeds. More recently, they’ve ventured into organic proteins.

So far we have bought this powder twice – one big tub of chocolate and another of the vanilla. Nutiva protein powder taste sweet without sugar or stevia. It also packs additional benefits like digestive enzymes and superfoods like shiitake mushroom, broccoli, and spinach. Don’t worry, you don’t taste those things!

The nutrition facts report a higher percentage of protein versus Aloha.

It also has more essential vitamins and minerals, coming naturally from the fruit and vegetable blend inside. However, the vitamin E is added. As a vegan one doesn’t really need that though, because if you’re on a whole food plant-based diet, you’re getting plenty of essentials from food (with the exception of B12).

The fiber content in Nutiva is 2g which is on the low side and we would argue that’s a good thing.

Why? Because unlike meat eaters, we have so much fiber in our diet that sometimes we’re looking to scale it back. Too much can cause digestive discomfort in many people.

The only reason we don’t buy this vegan powder more often is because we personally don’t want one that includes digestive enzymes or probiotics. This one adds bifidobacterium longum and an enzyme blend (protease, amalyse, lipase, cellulase, papain, bromelain). Even though we would prefer those to not be included, we’re probably in the minority.

Both the chocolate and vanilla are quite tasty thanks to their monk fruit for sweetness and coconut milk powder for creaminess.

On Amazon here’s the link for the vanilla (the best-rated) and here’s the chocolate. 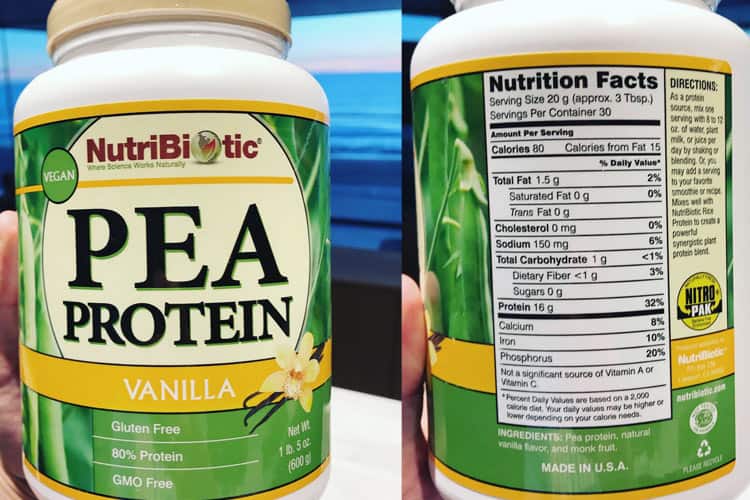 Do you want a super simple powder that’s just protein and monk fruit, without other ingredients added?

Then NutriBiotic has just what you’re looking for.

Since other stuff isn’t added, the calorie count is quite low at just 80 calories. With that, you’re getting 16g of amino acids.

If you run the numbers, that’s means 80% of the calories are from protein content. It’s a good option for bodybuilders and athletes who want to add it to something else, whether it be a shake, pudding, acai bowl, or baked goods.

As you are probably aware, pea has an excellent amino acid profile. They use yellow peas which are grown and processed in the US.

Keeping things simple, they only offer it in one flavor; vanilla. There is also an unsweetened and unflavored version, but we’re focusing here on monk fruit.

Here’s the link for it on Amazon.