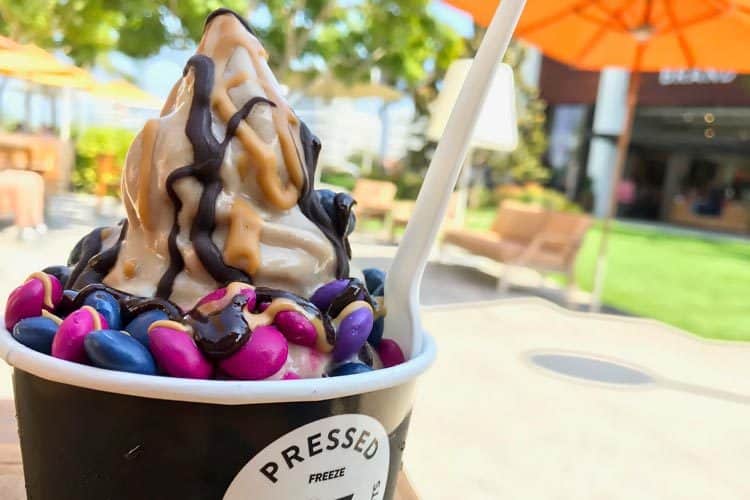 Whether it’s vegan candy for Halloween, Christmas, Valentine’s Day, Easter, or just because, there are a number of brands which replicate the taste and texture of famous candy bars, without using milk or eggs.

Many are gluten free and forgo other common food allergens, too.

Are there any vegan M&Ms?

Nope. Mars. the confectionery company which makes M&M’s, uses skim milk, lactose, and milkfat. These are found in the Milk Chocolate and Dark Chocolate M&M’s flavors. Dairy ingredients are used in both their US and international versions.

There is vegan candy like M&Ms made by others; Unreal Dark Chocolate Crispy Quinoa Gems, No Whey Foods Choco No No’s, and Sunspire Sun Drops. None of these use dairy, eggs or other animal-derived ingredients.

Above is a photo of the Unreal brand sprinkled atop plant-based ice cream from Pressed Juicery here in Los Angeles.

These and other vegan chocolate candy made to imitate Butterfinger, Kit Kat, Snickers, Milky Way, 3 Musketeers, and other famous brands are far from being superfoods.

Most are still loaded with sugar.

It may be in a better form, such as organic sugar or another that’s type that’s not cane or beet derived, but don’t fool yourself… the bottom line is that high amounts of any type will be unhealthy!

Still, everyone deserves a treat once in a while, right?

Especially at Halloween and other festivities, where forgoing sweets would be just plain wrong.

If you’re going to indulge or let your kids do so, the following options can be eaten by vegetarians, vegans, gluten free folks, and those with milk allergies. Not guilt-free, but perhaps with less guilt! 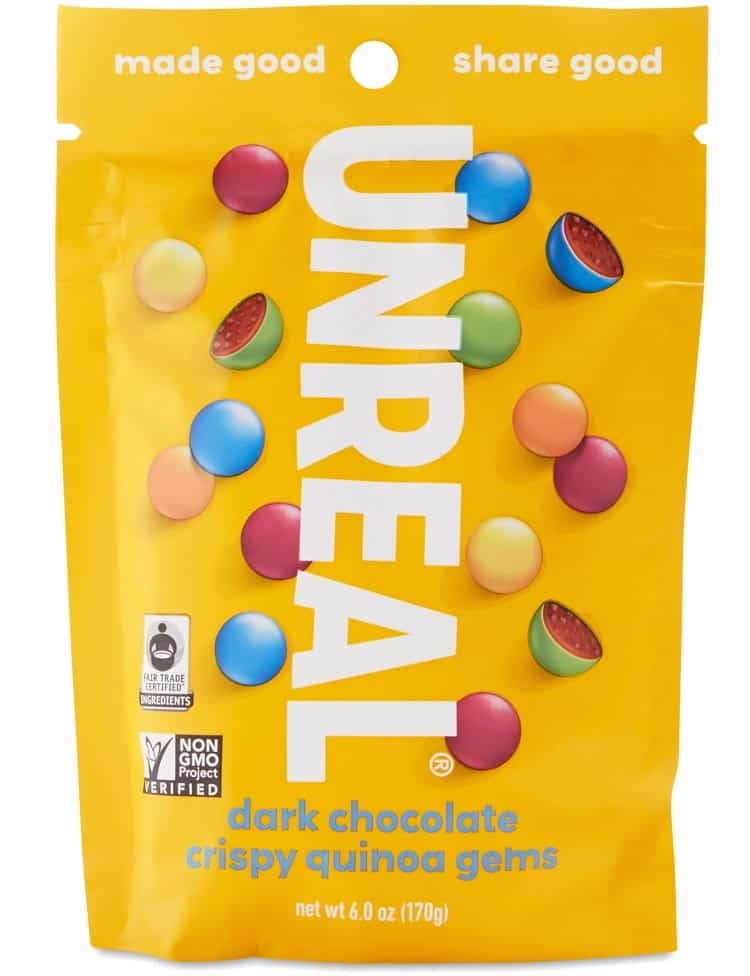 On a per ounce basis, the calorie count is fairly comparable to real M&Ms except there’s less sugar; 15g versus 22g.

M&Ms use the artificial food colorings Blue 1 Lake, Yellow 6, and Red 40, among several others.

PGPR stands for polyglycerol polyricinoleate. It’s an emulsifier made from glycerol and fatty acids

You can find Unreal at many locations of Whole Foods, Kroger, Market Basket, Wegmans, Fairway, Sprouts, and they’re available on Amazon.

They also have Milk Chocolate Gems but those are made with real milk.

Reese’s Pieces are not vegan. As with M&Ms, they use dairy in their chocolate.

Unreal makes cups that work, but not pieces. 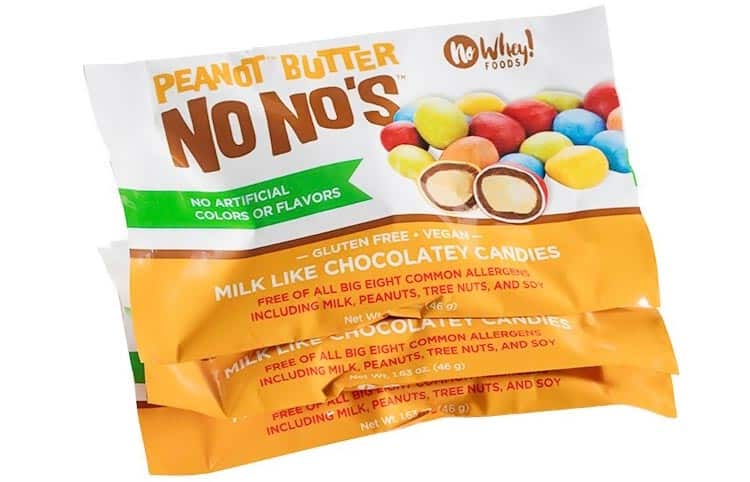 The best dairy free Reese’s pieces replacement will be No Whey Foods Chocolate Pea “not” Butter No No’s. They taste like peanut butter but they’re nut-free, since they’re made with roasted sunflower seeds. The sugar is vegan and no milk is used. 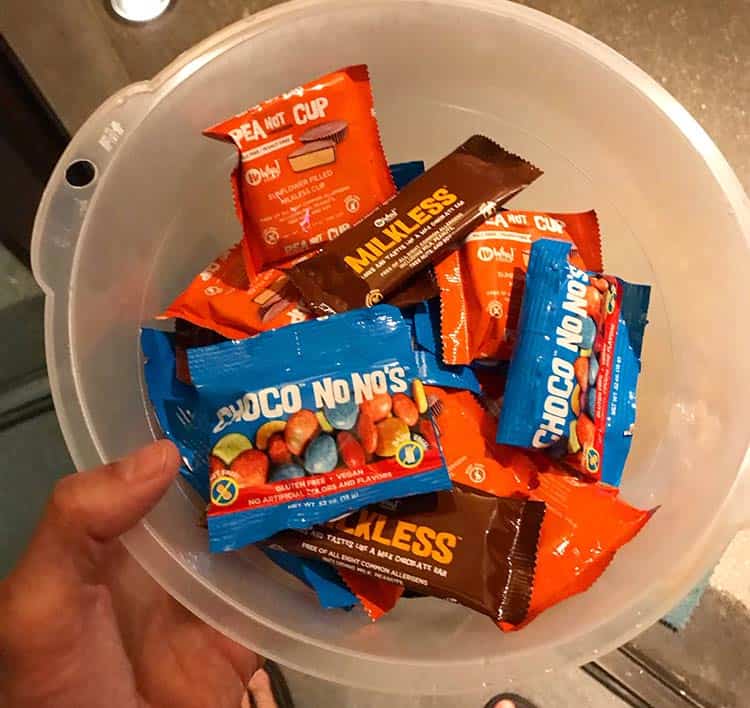 As of Halloween 2019 we can no longer find it for sale – in-store or online. We are not sure if it’s discontinued or just a seasonal/limited time product.

Meanwhile, check out their vegan Reese’s peanut butter cup alternative, which is available on Amazon. We use them for Halloween candy, as shown above.

No. As with M&Ms, Reese’s uses dairy-based chocolate made with skim milk, milk fat, and lactose. This holds true for the regular, dark chocolate and mini cups, as well as their branded peanut butter spread and Easter egg candy.

Fortunately since Reese’s are so popular, there are plethora of products made to mimic them that are allergy-friendly and plant-based. 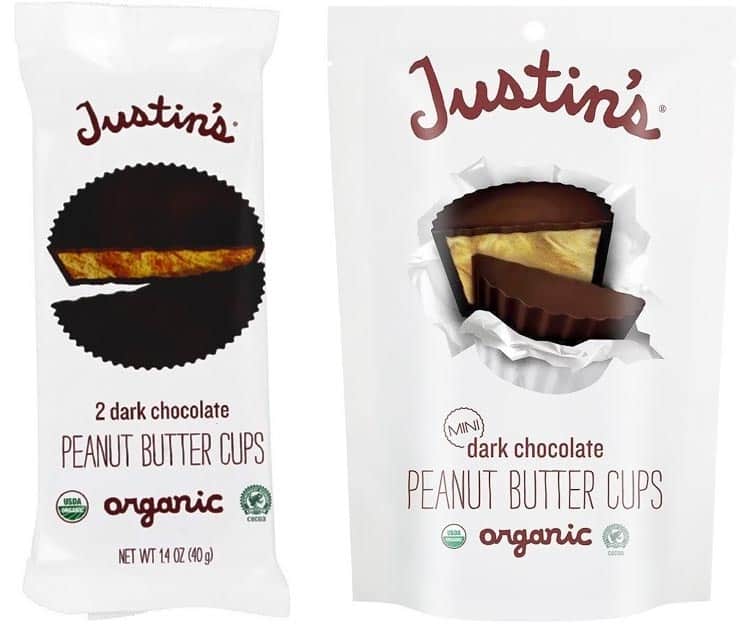 Justin’s vegan peanut butter cups are the best for a few reasons; they were first to market, taste great, 100% organic, and they’re sold almost everywhere. Dark Chocolate is their vegan flavor.

They nutrition label does say it “may” contain milk but they say that for legal reasons.

The FAQs on Justin’s website says they use shared equipment but it undergoes a sanitation process before making the dairy free PB cups. Furthermore, they say:

“…it is common practice for the chocolate industry to process cocoa beans on shared equipment with milk containing ingredients. So, while we are extremely careful, the chance of cross-contact exists even before we purchase the chocolate.”

In short, one can be reasonably confident that Justin’s peanut butter cups are suitable for vegans if they’re buying the Dark Chocolate flavor. Certainly the risk of cross contamination is less than that experienced in any typical restaurant.

Unreal, Theo, and Cleo’s make plant-based peanut butter cups. Their drawback is they are harder to find than Justin’s. Cleo’s, No Whey, and Unreal are not USDA organic certified like Justin’s Dark Chocolate cups are.

You can buy Justin’s almost everywhere, from major retailers like Walmart and Target, to the small independent stores. You even see them at airports and some convenience stores. This 12-pack on Amazon is a good deal. 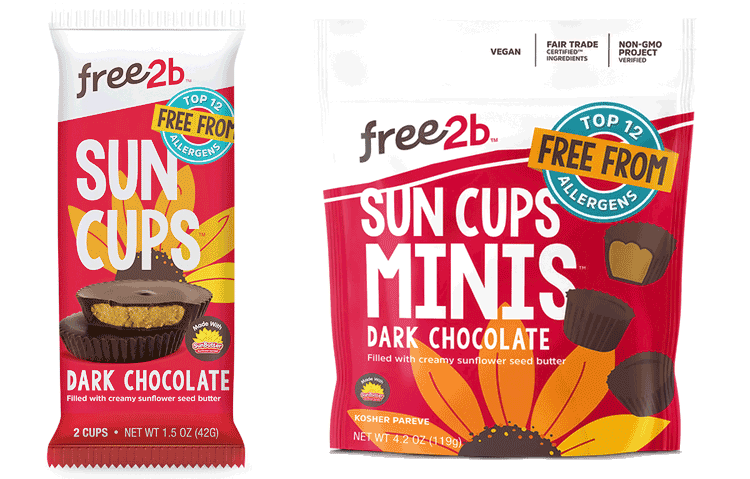 If you want a candy that tastes like Reese’s peanut butter cups but are not made with peanuts and are 100% vegan, then your best option will be Free2b Sun Cups. In addition to Dark, they’re available in Rice Chocolate. It tastes just like the milk chocolate used in Reese’s cups. They remind us of our childhood favorite candy, that we haven’t had in over a decade.

The sunflower butter they use, when combined with cocoa, is a great peanut-free flavor substitute for Reese’s.

Calling Free2B a healthy substitute for Reese’s may be stretching it, but they are healthier.

Free2B Rice Chocolate has 13g of sugar per 2 cups, while the Dark Chocolate has 12g. That’s almost 50% less sugar than Reese’s peanut butter cups which are 21g.

While not entirely organic, they are made with organic powdered sugar.

On Amazon here is the page for the Milk Chocolate and here are the Dark Chocolate.

Named after the owner’s German Shepard-mix from a pound, Go Max Go Foods is a small vegan candy bar company that makes substitutes for Snickers, Kit Kat, Twix, Nestle Crunch, 3 Musketeers, Almond Joy, and Reese’s cups. Most are gluten free and with the exception of their PB cups, you won’t find brands making similar plant-based alternatives for most these popular classic candy bars. 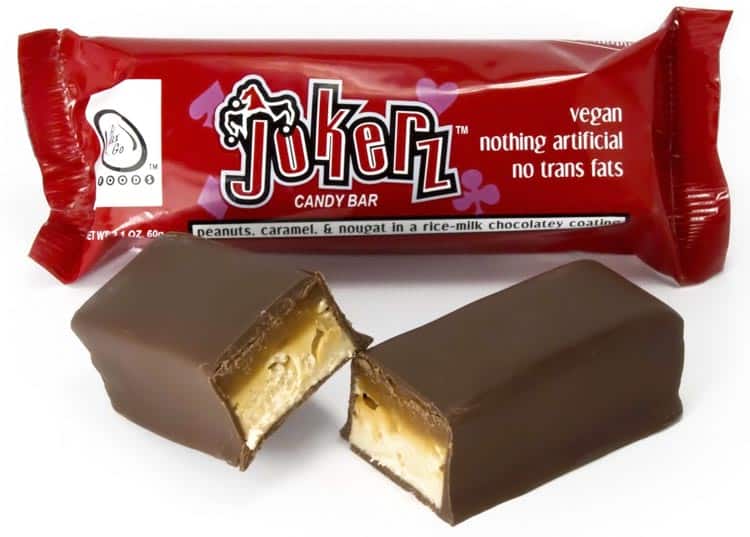 Just like Snickers, Jokerz candy bar has a nougat base topped with caramel and peanuts. It’s enrobed in dairy free chocolate. With 280 calories and 22g of sugar per bar, it is a bit healthier than a real Snickers.

Specialty grocers and food co-ops that cater to plant-based, gluten free, and other special diets will be your best bet at finding them for sale in-store. Check their website’s store locator. Surprisingly, Jokerz candy bars are not on Amazon at the time of this review.

Since Amy’s Foods have major distribution throughout the United States, Canada, UK, Australia, and much of the world, they’re easier to find than Go Max Foods brand.

But just because a store sells Amy’s, that doesn’t mean they sell their candy bars. Most do not.

On Amazon you can get a 12-pack of the Dreamy bars to satisfy that Milky Way craving.

Nestle’s Butterfinger bar is not vegan. It contains whey, nonfat milk, and lactic acid from cows.

They are gluten free but not nut free or soy free. Ground roasted peanuts is the 3rd ingredient on the Butterfinger nutrition facts label.

The first 2 ingredients listed are corn syrup and sugar. Those, along with the hydrogenated palm kernel oil, make Butterfinger one of the most unhealthy candy bars on the market. 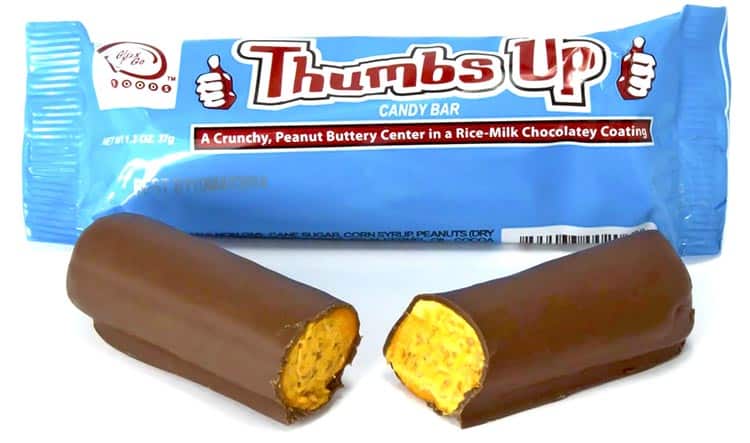 Go Max Foods makes a vegan candy bar that tastes like Butterfinger. Branded as Thumbs Up, it’s 160 calories for a 1.31 oz (37g) bar. It’s made with vegan and non-GMO cane sugar, tapioca syrup, and dry roasted peanuts. The oils used are not hydrogenated.

With 19g it’s not a low sugar alternative to Butterfinger but there is less sugar overall, since the bar is smaller.

Not available on Amazon or most stores, your best bet is to order direct from Go Max Foods.