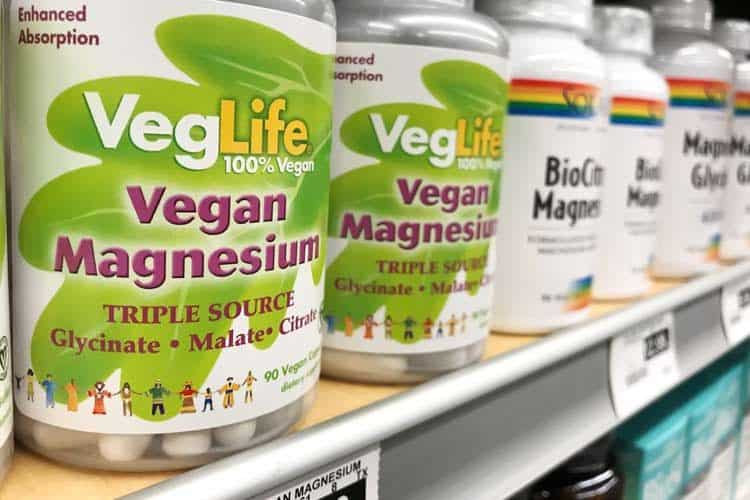 It’s funny how everyone seems to obsess over calcium intake, despite the fact that many Americans actually get too much in their diet, which can cause harmful health consequences. (1)

Americans don’t have a problem with calcium deficiency.

Rather it’s the rest of the Western diet which is unhealthy and low in co-factors needed for good bioavailability, like vitamin K and D.

Despite what you may have heard though, zinc supplements probably don’t help. (2)

Because of unhealthy diets, despite all the “good sources” of milk and dairy calcium that people gorge on, the US ranks among the very highest for rates of hip fractures worldwide. (3)

Another myth about calcium is that those on a plant-based diet don’t get enough.

Nothing could be further from the truth, as long as you’re not eating vegan junk food (even Oreos are egg and dairy free).

A half-cup of tofu has 253 mg of calcium. One cup of boiled collard greens is 266 mg. That’s not even enough food to fill you up for lunch and it provides over 50% of your daily value, an amount which by the way is much higher than what other countries recommend.

Why is our daily value higher than pretty much everywhere else? The powerful American dairy industry most likely had a role in that number.

Do vegans get enough magnesium?

Compared to calcium, the average intake is more problematic. Plant-based and vegetarian diets are less likely to result in a magnesium deficiency, but overall nearly half of Americans (48%) don’t get enough. Milk and meat have significantly less magnesium than vegetables, seeds, nuts and beans, though today fewer of those rich whole-food sources are consumed. (5) 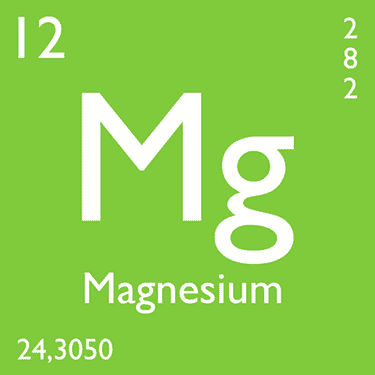 The good news is that if you’re a vegan, you probably consume significantly magnesium than your omnivore counterparts.

That’s based on studies published by The American Journal of Clinical Nutrition and another that was by the Danish government and compared vegan vs. non-vegans. Both studies concluded that the omnivore diet has lower intake. (6) (7)

In the Danish study, it was found that the average magnesium intake for those on a strict vegetarian diet (no dairy or eggs) was 654 mg per day for men and 494 mg for women. Both are above the RDA in the United States but not by a wide margin.

A minimum of 420 mg is advised for males age 31 and above, while females can require at least 400 mg during pregnancy. The rate of magnesium deficiency in the Danish study was 0% among the 197 vegans tested.

In fact, the lowest tested vegan female was consuming more than the highest tested female omnivore (415 vs. 383 mg) and the same trend was seen with the men (509 vs. 475 mg).

So if you don’t eat meat and dairy, does this data mean you’re home free?

Even though you’re probably consuming more, it still may not be the optimal amount.

Why you may need more

Even if you buy organic produce, here in the U.S. much of it is grown on factory farms who have used their fields to plant the very same crops year after year. No crop rotation. It’s believed that’s why there are fewer minerals in our vegetables today.

How bad is it?

Without even going into the data so far for this century, just look at how much we have depleted our soils of essential minerals during the latter part of last century. (8)

That’s a 21% decline in magnesium over a 30 year period. Since then, you can only imagine how this problem has only gotten worse, not better!

Non-essential phytonutrients – like certain antioxidants – do tend to be higher in organic produce. However when it comes to the essential vitamins and minerals, differences are not significant. So don’t delude yourself and assume you’re getting a lot more minerals from your organic lettuce! Most of the organic brands you buy at the grocery store utilize farming techniques comparable to the conventionally grown. (9) (10)

3. Denmark has the best produce 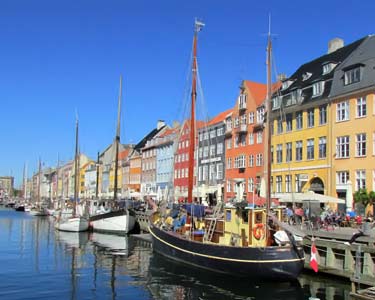 The word “best” may be subjective but there’s hard data to back that claim. Did you know that on a per capita basis, no other country in the world consumes more organic food?

Even their Department of Defense serves it at military bases!

Of course as we just pointed out, organic doesn’t mean more minerals. However in the case of Denmark it probably does, because unlike most other countries which just care about the bottom line, their government actively promotes sustainable farming practices, in addition to organic food. (11)

In short, the Danish study doesn’t necessarily translate to how much magnesium vegans are consuming in the United States, Canada, United Kingdom, and elsewhere.

The RDA is the amount needed to fulfill the minimum requirement for 97% of healthy individuals. (12)

It is not for people with certain health problems, diseases, and lifestyles who may need more.

If you live a high-stress lifestyle, you may need more. This is because both mental and physical stress increase how much magnesium your body eliminates. (13)

Mental stress may come from work and relationships, while physical stress can come from your exercise regimen which is otherwise good for you.

Injuries, illnesses, and surgery recovery are all circumstances where your body needs more of this mineral. (14)

The use of calcium in the body is almost entirely isolated (99%) to the bones and teeth. Elsewhere it’s bad, as eating excess is actually associated with coronary artery calcification and increased risk of heart disease and strokes. (15)

Magnesium is a different story. It’s vital throughout your body for many purposes. 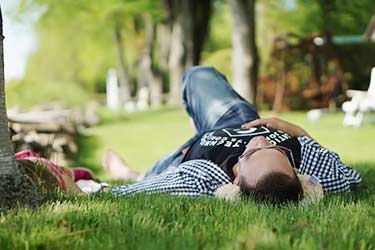 If you have a deficiency or even a sub-optimal amount for your lifestyle, the side effects can be widespread.

Just to name a few of the biological processes which may be adversely impacted (16):

If you’re not getting enough magnesium, symptoms can include feeling sleepy, fatigued, lack of energy, weakness, nausea, and sensations of tingling or numbness.

3 supplements for even more

Okay, so it’s clear that strict vegans and vegetarians have plenty of excellent dietary sources. Though getting enough everyday may still be a challenge if you require more. When you eat in, your meals are probably plenty sufficient. When you’re on the go and at work, maybe not so much.

Don’t assume your multivitamin has you covered!

The Centrum multi for adults only provides 13% of the RDA.

Perhaps that doesn’t surprise you. After all, the price point on that brand is more geared towards the Walmart shopper versus the Whole Foods aficionado. But even if you’re buying a high-end brand, it probably doesn’t provide much. 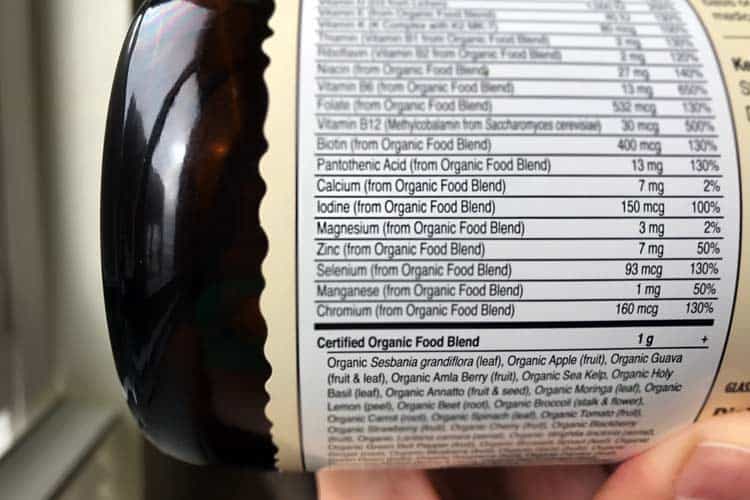 That’s the label for what we take here at Superfoodly; myKind Organic whole food multivitamin. Despite its hefty price tag, it only offers 2% of the daily value!

If you want more of than a trivial amount, you are going to have to take it separately.

When picking one out, be wary of…

If you’re on a raw diet, don’t worry about raw magnesium. Minerals are not affected by heat.

For sources derived from vegetables and plants, then perhaps you want organic magnesium. Though for all other forms, supplements can’t be USDA organic because isolated minerals don’t qualify for certification, even if they were isolated from plants.

There are plenty of viable options including Nature’s Answer, Solaray, Biolectra dissolving powder, and many other brands. What follows are reviews of what we believe to be the best vegan magnesium supplements on the market.

The conundrum with taking magnesium is that it competes with calcium for absorption. Too much of one can lead to too little of the other being absorbed.

So why not solve the problem by taking both? 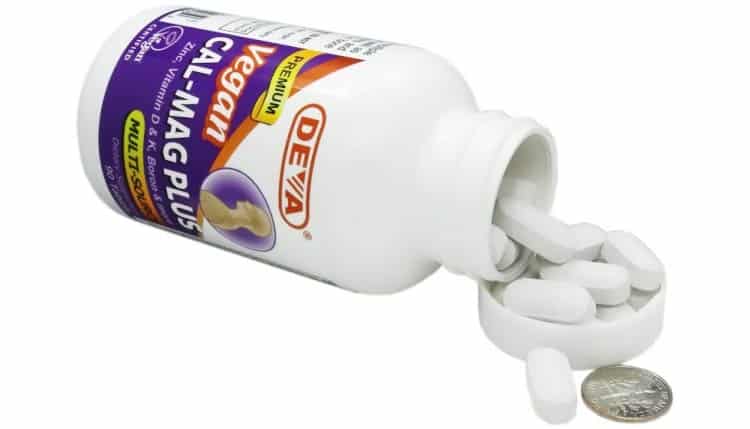 Those are the two starring ingredients in this product made by Deva, a brand whose supplements are entirely directed towards those on a vegan diet. Each three tablet dosage provides 400 mg of magnesium and 1,000 mg of calcium, which is equivalent to the RDA.

As far as the Mg, it’s in an oxide and chelate form, which is better for absorption than just one.

Along with those are several other essential and non-essential nutrients. There’s vitamins C, D2, K, and other minerals like zinc and boron.

Here’s the link for it on Amazon

This product contains Magtein, which is the trademarked name for the molecule magnesium L threonate. That’s a patented form which has gotten a lot of buzz because unlike the citrate and other common forms, the L threonate has been shown to cross the blood-brain barrier and therefore, is believed to be more readily available to the brain.

There are currently 4 clinical trials underway but so far, only 1 has been completed for dementia. As such, any benefits for it remain unproven. It should only be used as a dietary supplement and NOT as a treatment for any disease. (18)

It’s one of the most popular nootropic or purported “brain boosting” supplements on the market, where some people claim they experience better concentration and mental clarity when using it. Even though all that remains unproven, at the end of the day there is one basic proven benefit… it’s a source of magnesium regardless. 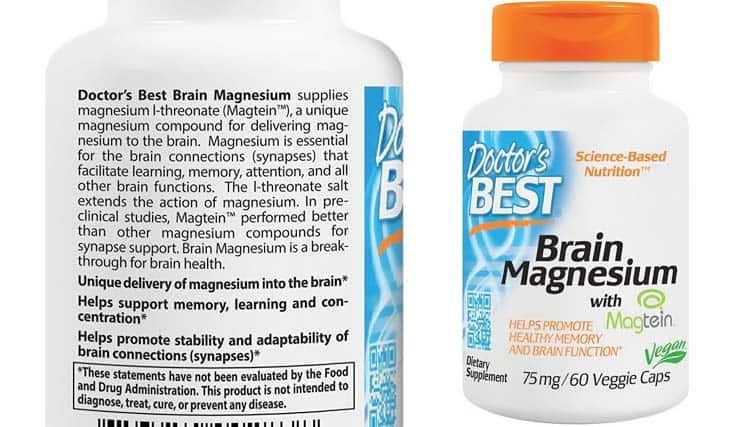 The patent holders license this form to several brands but we like Doctor’s Best. It’s non-GMO and uses plant-based ingredients, including veggie caps.

Each capsules is 75 mg (19% of DV) which may sound like a drawback but a lower dose provides some flexibility. You can always take more capsules if desired.

Check out the reviews for it on Amazon

This is the same product that was pictured at the start.

There’s a neverending debate out there as to which form of this mineral has the best absorption. You can read persuasive opinions for almost all. There are potential pros and cons with each.

Why VegLife is a great choice is because they include three different forms; magnesium citrate, malate, and glycinate. 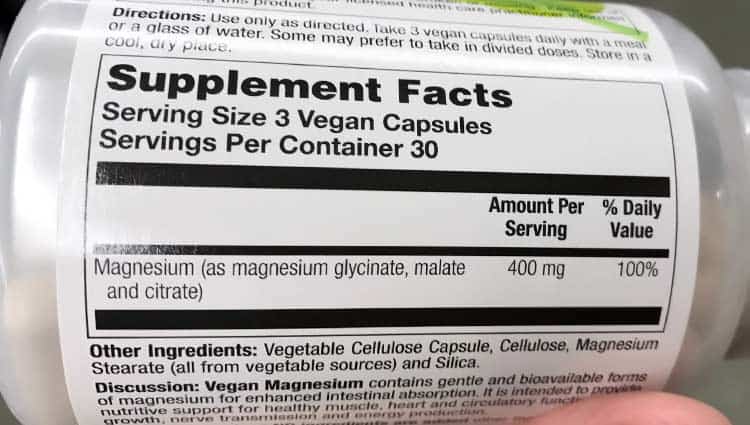 The nice thing about 3 capsules is that you can take them all at once or split them up throughout the day, like taking one with each meal. They’re gluten free, non-GMO, and of course no gelatin is used.

We have only seen VegLife for sale at a local co-op. The chain stores don’t seem to carry it. No worries though because you can pick up a bottle on Amazon.