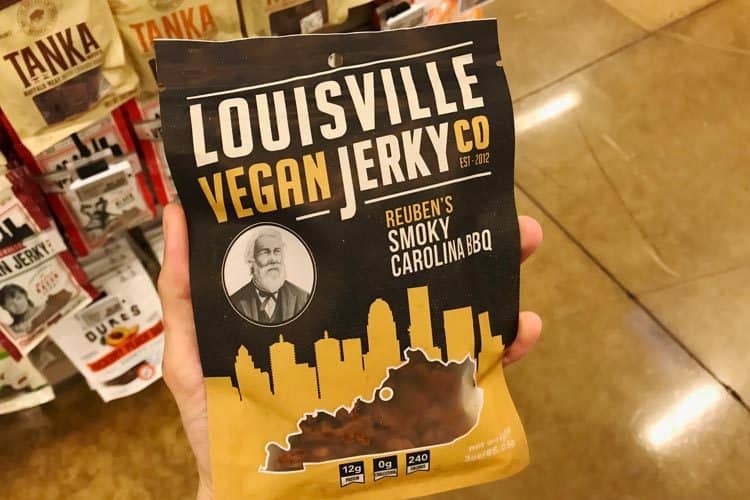 Is Vegan Jerky Healthy? Best Brands & Which To Avoid

First, it was soy patties from Morningstar Farms in the 70’s.

Gardenburger made its debut in the 80’s.

Today, it’s all about Beyond Meat and Impossible Burger.

The creativity and quality of vegan meat brands have certainly come a long way!

There are many benefits of these when compared to their animal-based counterparts, but that doesn’t necessarily mean they’re always healthy.

Healthier, yes. But there are still major pitfalls you need to be aware of.

It’s not just Whole Foods and Trader Joe’s selling the stuff. Brands like Louisville and Primal Strips are mainstream, showing up for sale even at some convenience stores.

What is vegan jerky made of?

While some use dried fruit, most vegan jerky brands are made with textured soy protein and/or vital wheat gluten. It’s dehydrated and combined with spices like garlic and pepper, oils, sugars, salt or soy sauce, smoke flavor, and preservatives like dairy-free lactic and citric acids.

Louisville vegan jerky is made of textured soy protein. The soy is not organic but it is non-GMO certified.

Although not officially gluten free, Louisville does report that their jerky contains no wheat or gluten-containing ingredients. Instead of soy sauce which typically uses wheat, they use GF tamari.

Primal Strips are made of a meatless base consisting of seitan (wheat protein) or soy protein isolate. Both are non-GMO. The gluten free flavors are those made using soy; Hickory Smoked and Texas BBQ.

With the exception of mango and coconut jerky, most plant-based recipes use ingredients similar to Louisville and Primal. Some brands, like Unisoy, combine soy and wheat protein.

Many people say that vegan jerky tastes very similar to real meat. Most plant-based recipes use seitan or soy protein which is dehydrated to produce a similar, chewy texture. Since they also add salt, sugar, and similar spices, the flavorings are comparable.

Unlike beef jerky, vegan varieties are cholesterol-free. They also don’t contain heterocyclic amines, which are cancer-causing compounds created whenever real meat is cooked.

The chemical reaction which produces HCAs requires the presence of creatine. That’s not found in plants, only animal muscle.

Both real and vegan beefy jerky will contain high amounts of sodium. Some use sea salt while others use soy sauce or tamari.

Regardless of source, excess sodium is bad for you.

Even if you don’t have high blood pressure, it contributes to inflammation and accelerates cellular aging. (1) (2)

Louisville jerky nutrition facts list a staggering 500 mg of sodium per 1 oz serving for Smoked Black Pepper, Smoked Chipotle, and Sriracha Maple. The flavors with the least amount of salt aren’t much healthier; Maple Bacon and Smokey Carolina BBQ are 480 and 430 mg, respectively.

Since each bag contains 3 ounces, if you eat it all at once (which is pretty common) then you will have consumed a whopping 1,500 mg. That’s 100% of the max daily sodium intake as recommended by the American Heart Association. (3)

Bad, yet still lower than how much salt there is in beef, pork, and chicken Slim Jim’s!

In addition to salt, both real and fake meat jerky usually have added sugar.

Plant-based Primal Strips contain 3-5g of sugar per ounce. Not ideal, but still less than most real meat jerkies.

As with salt, high amounts of sugar in any form are not good for you. Though one may argue some forms are less bad than others. Since the plant-based brands tend to use less processed sweeteners, some say they’re better. 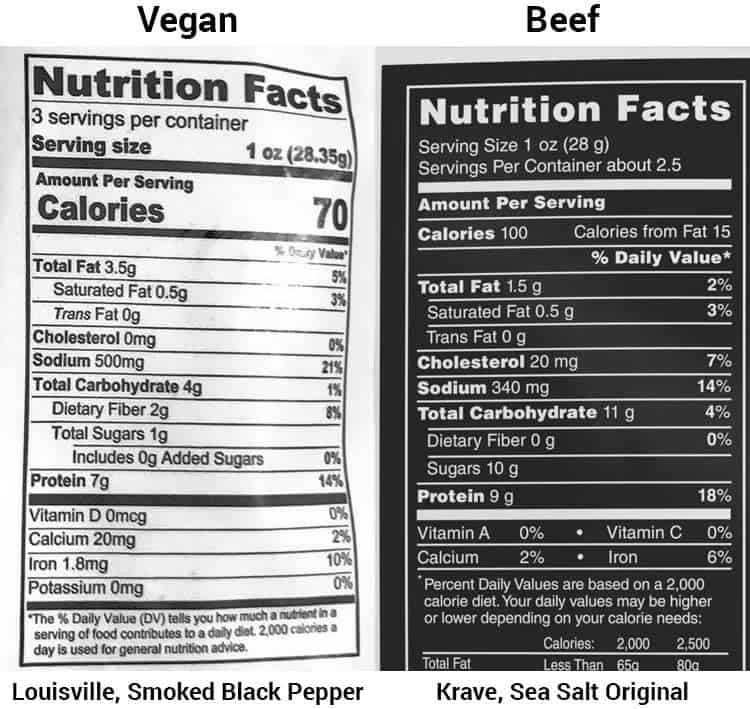 How much protein there is in Louisville vegan jerky ranges from 3-7g per oz. That’s 70-80 calories, depending on flavor. This means up to 40% of the calories are coming from protein.

Compare that to Krave Beef. It has 9g per ounce but more calories at 100. Since protein is 4 calories per gram, it actually has less protein than its vegan counterpart. Only 36% of the calories in Krave are amino acids.

It is true that based on ORAC values, many spices are among the highest antioxidant foods. Even though many flavors add several spices, given the processing, it’s hard to quantify how much (or how little) antioxidant boost you’re getting from eating one of these chewy snacks.

Salt and sugar aside, what makes vegan jerky unhealthy is the smoke flavoring which is added.

Even that which comes from natural wood burning.

The cancer causing compounds in smoke are polycyclic aromatic hydrocarbons (PAHs). Many are classified as Group 1 carcinogens by the World Health Organization, which is the worst ranking possible. 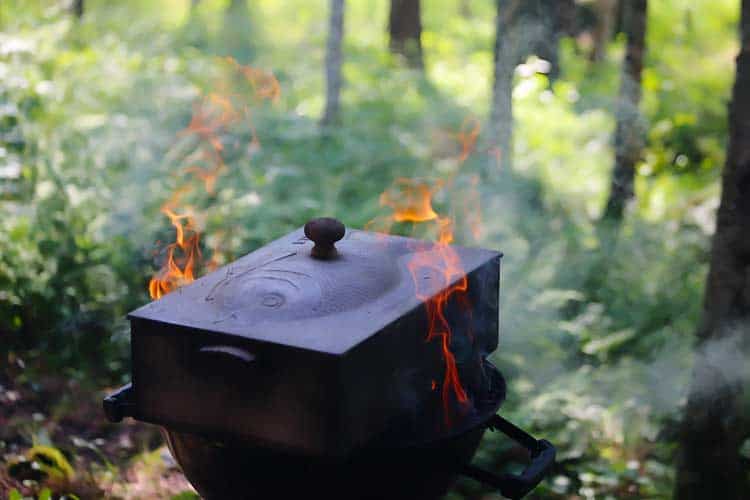 Smoked meats, smoked salmon, and any other type of food which is authentically flavored in a smoker will be chock full of these carcinogens.

The same holds true for natural smoke flavor which is manufactured separately and then added to many foods, including jerky.

The good news is that liquid smoke flavor contains fewer PAHs. That’s because these compounds aren’t very water soluble. Since the real smoke flavor is captured using condensers, less of the PAHs get collected.

In other words, foods which have the smoke flavor added – rather than directly smoked – should have fewer PAHs. Since jerky that’s vegan often uses added smoke flavor, it’s less bad for you than real dried meat from a smoker.

Both the real meat and imitation versions generally contain high amounts of added salt and sugar. Vegan jerkies are healthier because (1) plants don’t contain cholesterol, (2) they won’t contain cancer-causing heterocyclic amines (HCAs) which only come from animal tissue, and (3) they contain fewer carcinogenic PAHs than real jerky made in a smoker.

The best ones to eat will be those which don’t use real smoke flavoring. The brand Louisville uses it in all of their flavors. Some from Primal Spirit Foods do not, such as their Hot & Spicy (wheat-based) and Texas BBQ (soy-based).