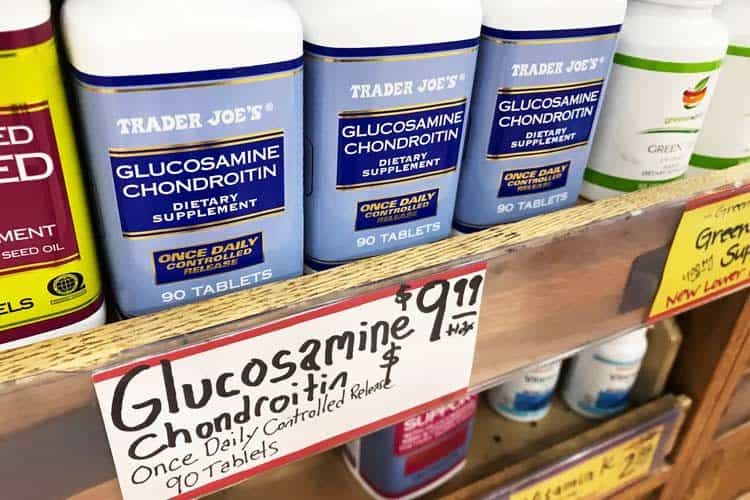 Is There a Vegan Glucosamine Chondroitin?

From back pain to bad knees, the most popular dietary supplement for joints is one or both of these ingredients, sometimes with MSM added.

If you’re plant-based, the uber-common gelatin softgel is the least of your problems. Even when you find veggie caps, you discover all glucosamine supplements derive their main ingredients from animal-based sources.

Or at least, almost all of them.

What is glucosamine made out of?

Glucosamine is naturally found in the human body, in the fluid which surrounds joints. Supplemental forms, including glucosamine sulfate and glucosamine hydrochloride, are usually made from the shells of shellfish. They are not vegan, vegetarian, or suitable for people with shellfish allergies.

As with glucosamine, chondroitin is a joint fluid naturally found around cartilage. Chondroitin sulfate supplements are made of cow tracheas, the noses and ears of pigs, as well as shark cartilage.

Due to fears of mad cow disease and the marketing opportunities that result from it, many of the higher-end supplement brands use sharks as the source. It typically costs more than bovine and porcine sources. (1) (2)

Is there a vegan glucosamine?

Yes, 100% plant-based sources do exist, but because they cost more to make, not many supplement manufacturers use them. 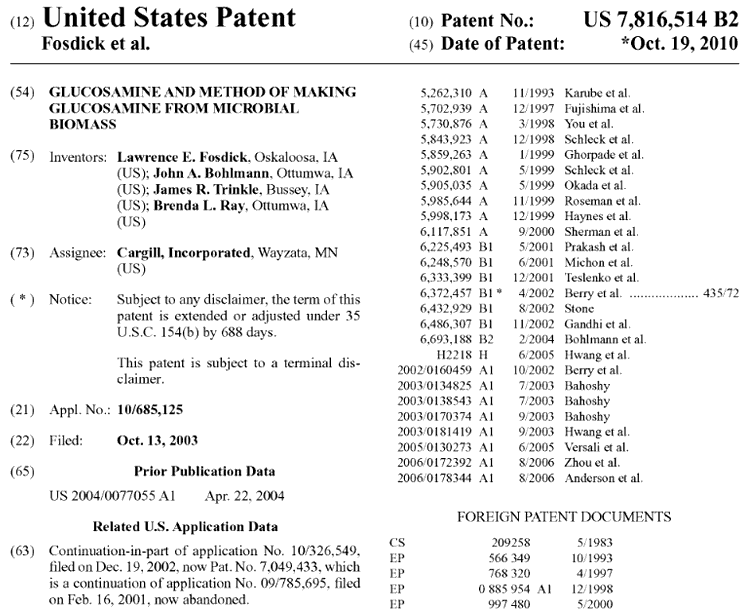 The first vegan glucosamine was patented by Cargill. With a claimed invention date of 2001, the patent was filed two years later. It covers a method of making it from fungi. In 2007, the Chinese company TSI Group filed a patent for a non-shellfish glucosamine which can be made from Aspergillus, Penicillium, Mucor, or mushroom.

In other words, both methods make plant-based glucosamine from fungi species containing chitin, which is a fibrous chain of glucose found in their cell walls.

Chitin naturally contains glucosamine. To separate and concentrate it, the process involves fermenting or immersing the fungi in an acidic solution.

Since no grains are used, vegan glucosamine supplement sources are gluten free, soy free, and non-GMO. However, their capsules and other ingredients may or may not be. Check the label. (3) (4)

Is there vegan chondroitin?

Until recently, vegan alternatives to chondroitin did not exist. Now there are two 100% plant-based options; Mythocondro and Phytodroitin, which came to market in 2013 and 2016, respectively.

Developed by the Italian firm Gnosis, Mythocondro is chondroitin sulfate supplement that is not from shellfish, cows, or pigs. It’s non-GMO and contains no common allergens.

Mythocondro is made using a patented fermentation process. A non-GMO bacterial strain undergoes natural biosynthesis, to produces capsular polysaccharides. Those undergoe sulfation, to create the structure of chondroitin which is found in human synovial (joint) fluid.

ProTec Nutra, which is based in the United Kingdom, developed Phytodroitin as a non-shark vegetarian chondroitin substitute. Made from algae through a fermentation process, it contains a mucopolysaccharide structure with glucuronic acid, just like shark sources do. However, it’s not 100% identical.

Using them not only saves sharks and cows, but potentially your joints too! 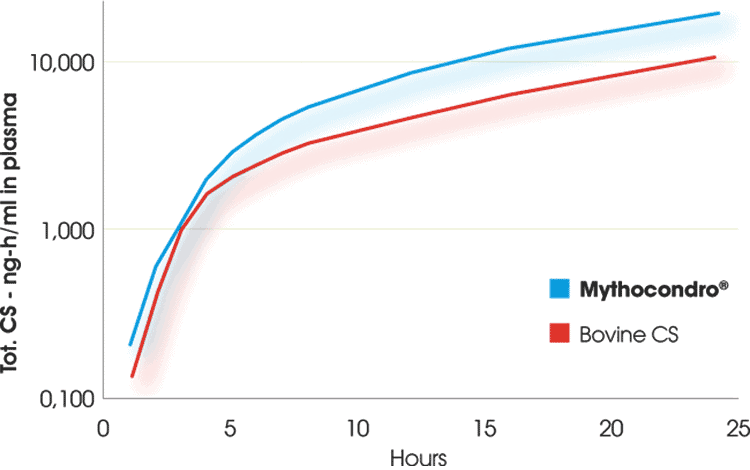 A human clinical trial had 24 adults take a 2,400 mg dosage of either cow-derived or Mythocondro. The latter had 43% better bioavailability, based on how much was measured in their blood during the 24 hours which followed. 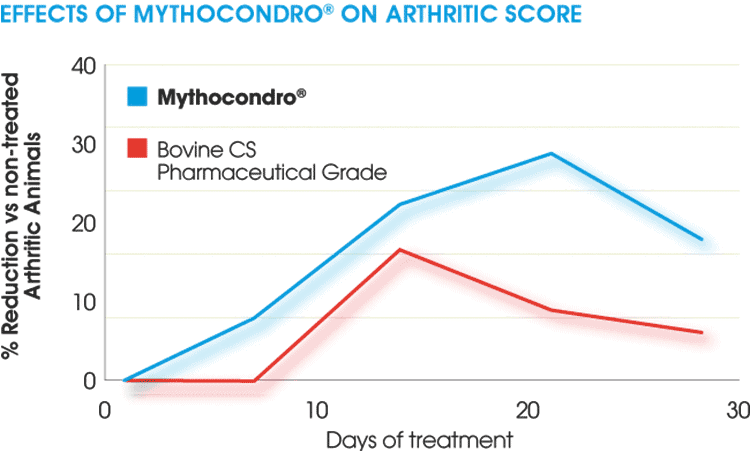 There is 30% greater biological activity proven in animal models. 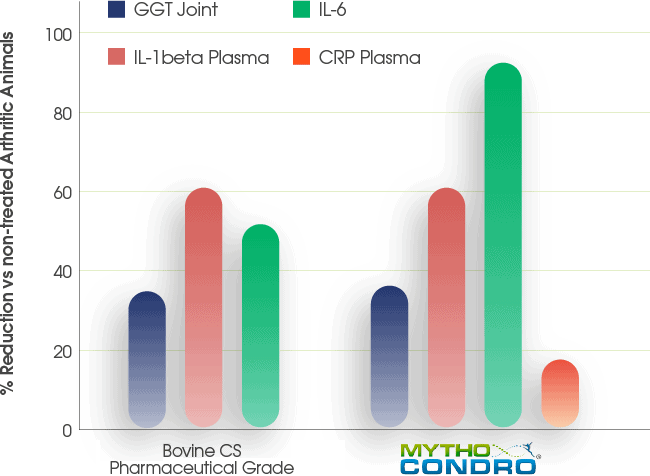 There has been animal and human data published demonstrating the efficacy of Mythocondro. The other brand, Phytodroitin, does not have studies published to show how well it works. For that reason, the best vegan glucosamine chondroitin supplements are those which use Mythocondro.

When it comes to the glucosamine component, or just plain glucosamine supplements, there are many brands selling it Deva, Doctor’s Best, Jarrow Formulas, VegLife, Source Naturals, NOW, and Enere. Most of these brands do not disclose on their label or website as to whether they are using the version from Cargill or TSI Group.

TSI markets theirs as GlucosaGreen and some supplement labels will list that.

Cargill Regenasure is the bestselling vegan glucosamine for dogs, cats, and livestock, though some human supplements use it, too. It’s made in the USA, certified GRAS (Generally Recognized As Safe), and is 98% pure.

While both GlucosaGreen and Regenasure publish data on purity and manufacturing standards, neither manufacturer has published studies or sponsored clinical trials that use their non-crustacean glucosamine.

The lack of clinical data on them is far from ideal, though understandable given that they’re newer versions. It’s also of less concern because glucosamine is an amino sugar that is a much simpler structure than chondroitin.

In theory, sources of glucosamine sulfate should be molecularly identical regardless of where they come form.

Setting aside the debate as to which form is best, the bottom line is that plant-based sources are available for each form. (5) (6) (7)

Reviews of the best supplements

Deva glucosamine MSM CMO (cetyl myristoleate) complex is the most popular brand for plant-based. This is because Deva caters specifically to vegans and vegetarians.

Those 3 ingredients, along with the added boswellia extract (Indian frankincense), are favorably rated by many users. It’s available on Amazon.

The drawback is that they’re using glucosamine HCl, which might not work as well as the sulfate.

Not that they’re bad choices, but the disadvantage of Deva and Doctor’s Best is that neither of those supplements include chondroitin.

While not perfect, the best and simplest choice will be Jarrow Formulas vegan chondroitin and glucosamine.

Even though the glucosamine hydrochloride may not be the preferred form, the advantage is that you are getting it along with chondroitin in a single supplement. We haven’t seen it sold in-stores but you can get it on Amazon.

Whether you want plant-based because of your diet, your ethical beliefs regarding the killing sharks and livestock, or for safety concerns, you do have non-animal options available.

Even non-vegetarians will appreciate the potential danger regarding mad cow disease; it’s caused by a prion (not a virus) and it’s not destroyed through the heat of pasteurization or even cooking. All the more reason to source from plants!