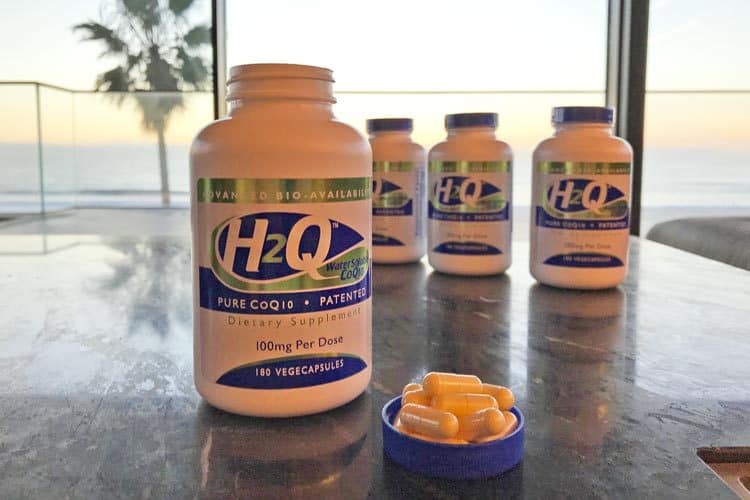 While they may not be outright scams, many dietary supplements on the market don’t have the research to warrant taking them.

Sure, they may help, but if there’s little to no clinical data, is it really worth spending $50+ a month on?

However, some supplements are certainly worth it based on their research.

Among them, CoQ10 and curcumin may be the strongest contenders.

The only reason CoQ10 isn’t classified as a vitamin (meaning, essential micronutrient) is because our bodies produce it. Therefore, technically, we don’t need it from dietary sources.

But take a look at this chart showing how much you make as you get older.

Not a pretty picture.

With a molecular weight of just 866 daltons, it’s impossible to measure and view in real-time exactly what transpires inside the body when we take a CoQ10 supplement.

However, there are a plethora of human clinical studies which strongly suggest health benefits – based on the before, during, and after measurements of various parameters.

With nearly 500 peer-reviewed human clinical trials and another 4,000+ pieces of research on PubMed about coenezyme Q10, it is one of the most studied micronutrients. (1)

Given this, don’t you think it’s worth spending a few bucks on?

The problem for those on plant-based diets is that almost all of the supplements on the market use gelatin capsules.

While they might not be stocked at your local Whole Foods or vitamin store, there are vegan supplements out there for CoQ10.

This is because CoQ10 is made through fermentation process which does involve non-organic components. There’s no way around that. There’s no natural source of the coenzyme that can be used to harvest it.

If you look at the best COQ10 foods you will see how minuscule their quantities really are. It is found in both animals and plants, but the amount you would have to eat to get a significant dosage is not feasible.

Reindeer meat, which is the richest known source in the world, contains 15.8 mg per 100g (3.5 oz) of meat. Even if you are an omnivore, you don’t want to be eating that in quantity given the cholesterol, saturated fat, and other drawbacks. Plus, where would you find it for sale?!

Among vegan sources, raw soybeans contain 1.87 mg of CoQ10 per 100g (3.5 oz). Eating a serving daily is easy, since each would be <200 calories and provide high protein with minimal carbs and fat.

Yet, that would only be giving you 2 mg daily.

If a water-soluble form is used, it could be taken 4-7 times per 24 hours. That’s several hundred milligrams… or at least 25 servings of reindeer meat!

Garden of Life RAW CoQ10 is vegan but not organic. Separate from the CoQ10, it does contain cold-pressed chia seed oil and some of their other formulations add organic fruits and vegetables. Yet, the key ingredient of CoQ10 remains conventional.

The difference between ubiquinol and ubiquinone is important.

Ubiquinol is the reduced form of CoQ10. While both forms play important roles in the body, it’s easier for the body to convert ubiquinol to ubiquinone.

Through what is known as redox interconversion reactions, the body is constantly maintaining equilibriums of these forms. But not in equal amounts.

As a supplemental source, you want the ubiquinol form since it’s already reduced and can be used as such, or converted easily to ubiquinone when needed.

The problem for vegans is that the Japanese company, Kaneka, owns the patents on ubiquinol production and therefore, is the sole supplier to supplement companies.

Whether you buy Jarrow Formulas, Doctor’s Best, or Qunol, they have to source these capsules from Kaneka.

And guess what Keneka uses for most of their capsules?

Or at least, the vast majority of what Kaneka supplies is in the gelcap form.

Fortunately, there are now ubiquinol vegan supplements on the market. These tend to cost more, as they are a specialty product by Kaneka. But if you’re plant-based like us, it’s well worth it.

In the US and Canada, Bluebonnett sells it under the CellularActive CoQ10 line. It’s gluten free, soy free, non-GMO, dairy free, and of course gelatin-free. Suitable for strict vegetarians/vegans.

Check the current Amazon pricing for it here.

Unfortunately other brands like Deva, Solgar, and Country Life vegan CoQ10 use ubiquinone, not ubiquinol. If you’re going to go with ubiquinone, we would recommend the Amazon brand Revly because it’s a good price.

You could call ubiquinone the first generation and ubiquinol the second generation.

You may not be aware that today, there’s a third generation that’s even better.

You may have heard of Q-Gel, which is the brand name for a patented form of CoQ10 made by Tishcon. They make is using a 100% natural fermentation process, with a natural yeast food source.

This is quite different than ubiquinol and ubiquinone, which are made using solanesol. That’s a chemical that is natural but it’s extracted from tobacco leaves.

Tishcon has been on the market for over a decade and has several variations of Q-Gel, such as Q-Gel Forte and Q-Gel Ultra. 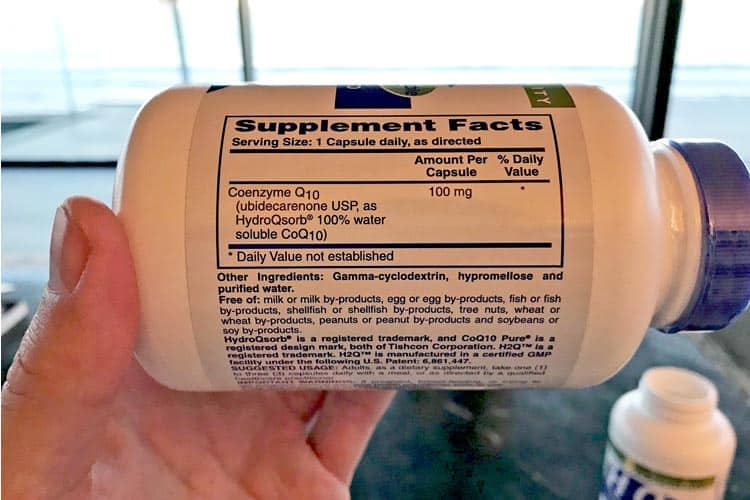 The best CoQ10 is Hydro-Q-Sorb. Available in vegan capsules, it’s a water-soluble form that utilizes a delivery system which is up to 8x greater than ubiquinone. This is made possible through microencapsulates, which bring it to the small intestines for absorption.

Another benefit of Hydro-Q-Sorb is that there’s no vitamin E. Many other brands add vitamin E. That’s not good, because it’s a fat soluble vitamin which is rather easy to overdose on.

While not organic, Hydro-Q-Sorb is non-GMO and contains no artificial ingredients. It’s gluten free and food allergy friendly.

Since it’s the top type of CoQ10 on the market, of course it’s not cheap. Though we think it’s worth it and it’s what we buy.

In the United States, Canada, United Kingdom, Germany, and other major markets, only a couple plant-based versions are being sold using this type.

Our favorite is the H2Q 100 mg vegecapsules. You can get it on Amazon.