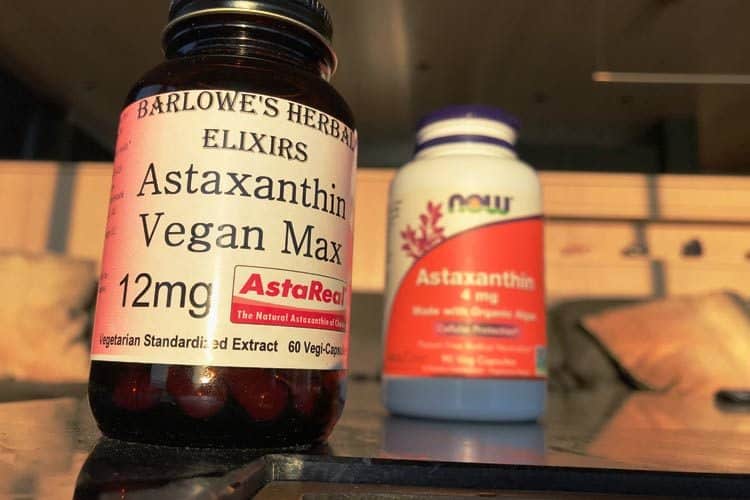 Vitamin C which can act as a pro-oxidant, meaning it creates free radicals.

That’s due to what’s known as the Fenton reaction. In plain English, it’s a chain reaction that occurs when ascorbic acid (vitamin C) comes in contact with iron.

Yes, it is a powerful antioxidant, but since it can also have the opposite effect, it’s something you don’t want to take too much of. Especially if you’re taking iron supplements.

Unlike vitamin C, astaxanthin does not have that nasty pro-oxidant side effect.

What it does have is antioxidant power which is exponentially higher than almost any other known substance.

The ORAC value of astaxanthin is a staggering 2,822,200. In comparison, fresh oranges are 2,103 when using an equal weight comparison.

You get the idea.

If you’re on a plant-based diet, we would have to recommend B12 as the most important supplement. After that and for omnivores alike, we would argue that astaxanthin is the #1 most valuable supplement you can take.

Among the normal foods which humans eat, astaxanthin is only found in fish such as salmon, trout, char, as well as crustaceans like lobster and shrimp. They get it from eating microalgae, which is vegan.

The same holds true for omega 3. Contrary to popular belief, fish don’t make it – they get it from the plants they eat.

In short, astaxanthin is 100% vegan but only if you get it direct from the source; microalgae (Haematococcus pluvialis). Since humans aren’t eating that directly, this red pigment is not part of a plant-based diet.

The good news is that virtually all of the supplements for it on the market do not extract it from fish or seafood. It’s much more efficient to harvest it from algae, which they do.

Even though the main ingredient is sourced from plants, most astaxanthin supplements on the market use gelatin to encapsulate it.

While it is easy to find the supplement without gelatin capsules, be warned that not all are created equal.

There are both synthetically created and naturally derived forms of it.

Among the all-natural astaxanthin sources, there are several different manufacturers who each have their own patents and protocols for growing the microalgae and extracting this compound.

While there are dozens and dozens of brands selling it, each typically sources the key ingredient from one of the following manufacturers:

Subsidiary of Fuji Chemical out of Japan. Founded in 1994, they were the first company in the world to cultivate astaxanthin algae commercially. Production facilities are in Sweden and Washington state.

Made by Algatech, which is based in Israel. Founded in 1998 at Kibbutz Ketura as a pilot project.

Made by AlgaeHealth, which is a subsidiary of BGG and was formed in 2016. Their 80 acre glass-tube photobioreactor farm is in the Yunnan mountain region of China.

Hawaii-based, it’s the parent company of BioAstin and Nutrex Hawaii brands. First source reviewed by the FDA in 1999, allowing it to be sold as a dietary supplement.

Made by Valensa, another Chilean company. They have been working with astaxanthin since 2002.

All of the above use non-GMO microalgae.

Which brand is best?

Any naturally-derived astaxanthin vegan supplement is better than not taking one at all.

That said, ideally you want one grown in enclosed photobioreactors, rather than open ponds. That latter may be more prone to environmental pollutants. 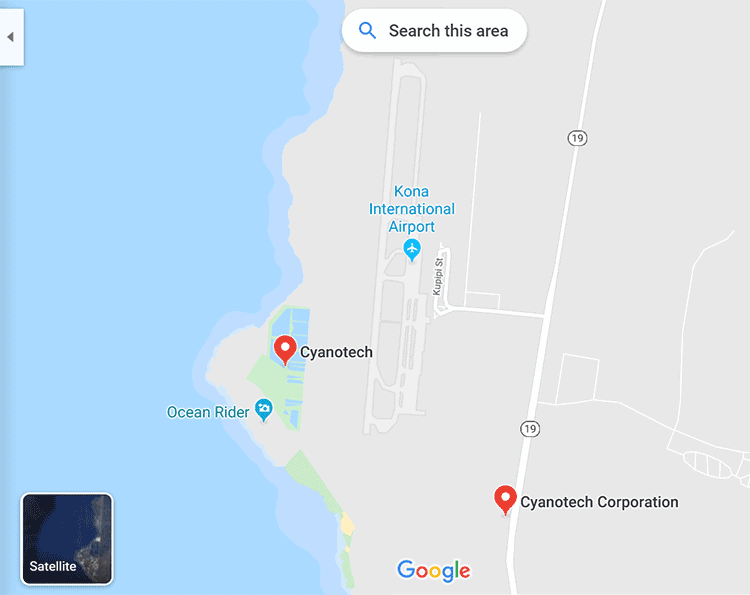 Cyanotech grows theirs in open ponds off the Kona Coast of Hawaii’s big island. It’s right next to the Kona airport. Jets taking off burn immense amounts of fuel, which creates air pollution. That concerns us.

Preferably, you also want a manufacturer who is highly experienced in growing and harvesting it.

Based on our years of personal astaxanthin reviews and research, the following two supplements are what we currently use here at Superfoodly. 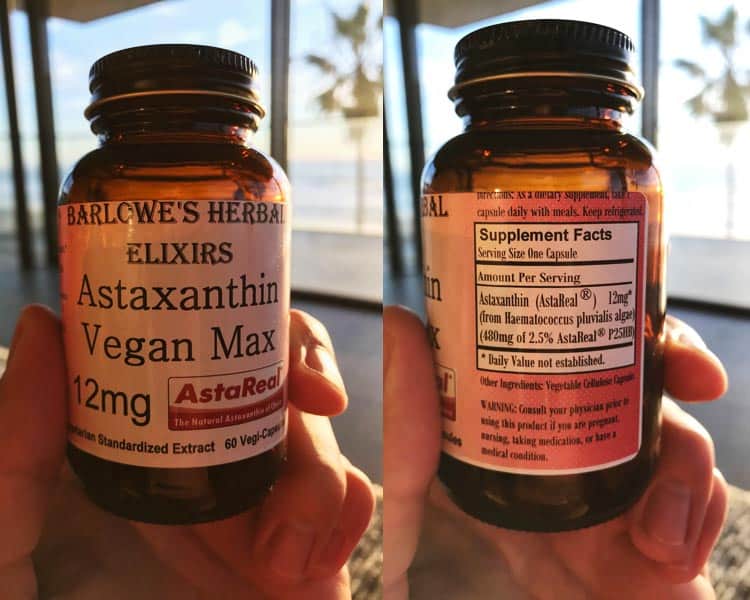 Admittedly the bottle labeling looks a bit amateurish and hokey, but don’t let that distract you. They’re not manufacturing these capsules. Rather, they’re sourcing AstaREAL veggie capsules direct from Fuji and bottling it.

We have spoken with the founder by email and he is passionate about his products. They’re stored in refrigerated warehouses and only in glass bottles, as to avoid any leaching of plastic chemicals.

Previously, we bought AstaREAL from a different brand, but they switched to one of the less desirable suppliers. Currently, our review of Barlow’s Herbal Elixirs astaxanthin are that it’s the best deal for 12 mg v-caps. We take one daily with breakfast.

We buy it on Amazon. You can check the current price here. 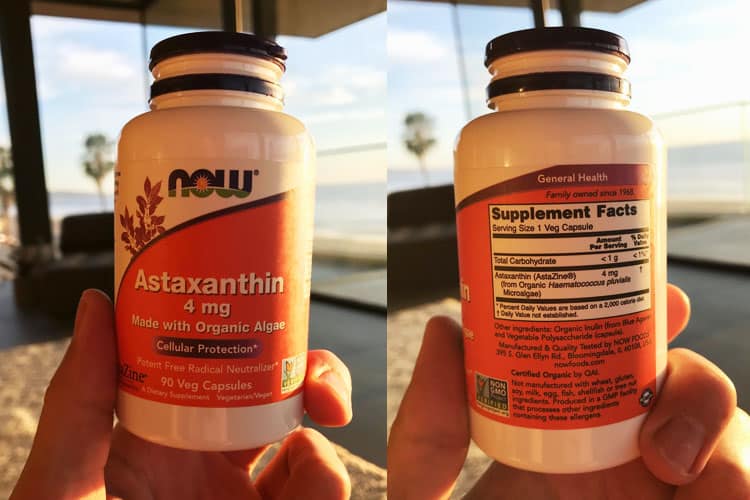 A 12 mg dose is great, but you don’t want to be taking that much multiple times per day. Being that astaxanthin is a fat-soluble compound, we aim to limit our dosage to 20 mg per day.

That means using smaller dosages after our 12 mg at breakfast. At lunch and dinner, we take 4 mg capsules.

While we prefer AstaREAL, currently no one in the US or Canada that we are aware of is selling 4 mg vegetarian-friendly capsules (all have gelatin).

Because of this, we’ve opted for AstaZine’s 4 mg organic. Yes, they do grow it in China but it’s using completely enclosed glass tubes. Furthermore, it’s in a remote mountainous region far away from the cities. AstaZine is the first organic astaxanthin on the market.

We typically get it on Amazon and you can check the price here.

Both of these are gluten free, non-GMO, and of course 100% plant-based.