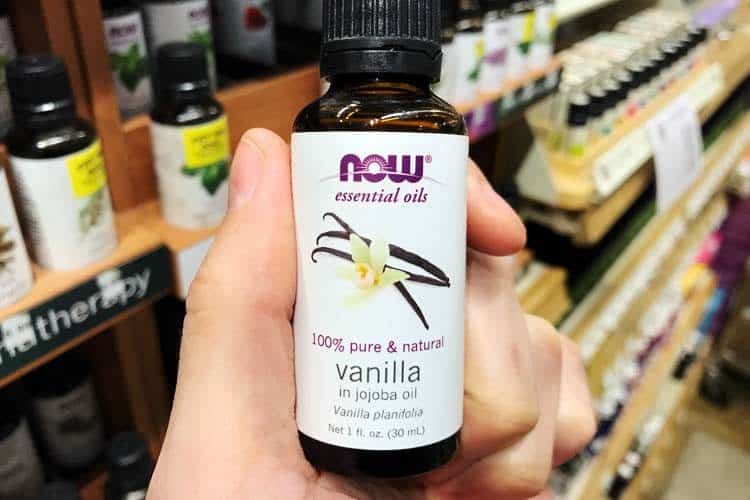 Is there vanilla essential oil?

Doterra doesn’t sell it but you will see Edens Garden, NOW Foods, and some smaller brands sell something which could be confused as being oil, based on the labeling. Technically there is no such thing as vanilla essential oil. This is because the volatile organic compounds in vanilla bean require the usage of solvents to extract them. Liquid carbon dioxide (CO2) or other chemicals are required.

The ISO, which is short for the International Organization for Standardization, is made up of 162 member countries. Together, they mutually agree upon definitions and standards for industrial and commercial purposes.

According to ISO standards, the definition of an essential oil is as follows:

Since they’re not a citrus fruit, vanilla beans don’t qualify for ISO standards of “mechanical processing” either. That’s basically the squeezing of oranges and lemons.

The reason there’s no such thing as vanilla oil is because the vanillin and other aroma compounds have a very delicate structure. Water is ineffective at separating them and steam will destroy them.

If you look at the labeling on products which appear to be vanilla EO, you will see that they do not use water or steam distillation. 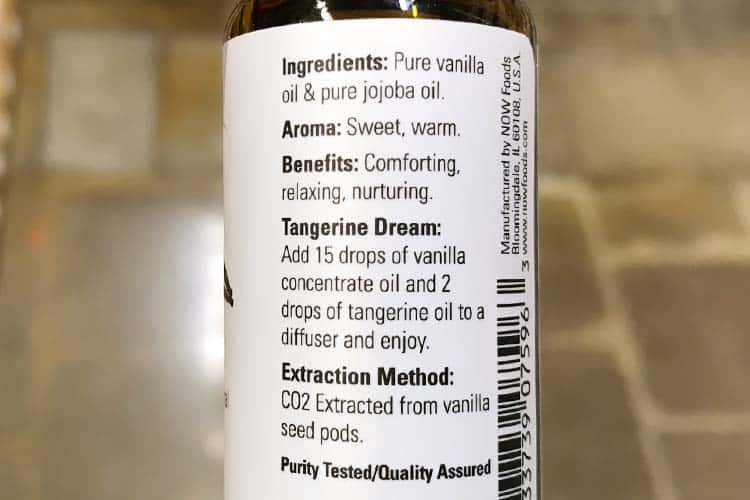 The closest thing there is to an essential form will be organic vanilla Co2 total extract. It captures the volatile organic compounds and no solvents are left behind, since the Co2 evaporates.

The difference between the flavored extract and what people believe to be the essential oil can sometimes be nothing more than marketing. Other times, there are distinct differences in the type of solvent used for extracting the compounds that produce the flavor and aroma.

Vanilla extract is made by macerating the bean pods and then percolating them in alcohol (ethanol). This solution is aged for several weeks or even months, to obtain the desired compounds. This is the edible flavoring which is commonly sold at grocery stores and used in baking.

Because it’s used in food, the definition of pure vanilla extract is highly regulated. It must contain at least 35% alcohol by volume and on a per gallon basis, a minimum of 13.35 ounces of beans must have been used in the mixture.

Alcohol-free extract won’t actually use the word “extract” on the label. Anything without 35% alcohol has to be called something else. The brand Simply Organic calls theirs “Madagascar vanilla non-alcoholic flavoring.” It contains less than 0.5% alcohol, as their process results in mostly glycerine and water being left over. 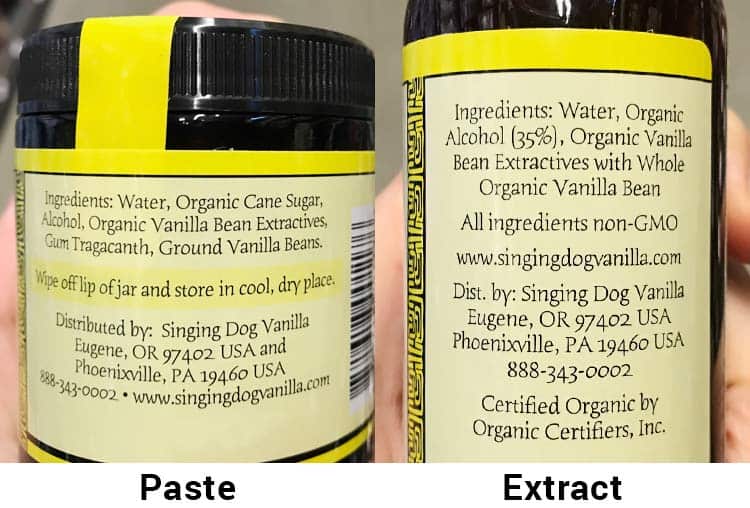 Vanilla bean paste is the extract that has been combined with cane or beet sugar. This term is not regulated, so ratios vary by manufacturer. Many contain specks of ground bean for aesthetic appeal.

Vanilla flavor has the loosest definition when it comes to the edible forms of this spice. Unlike extract which is made using alcohol, the “flavor” is typically made using propylene glycol as the solvent. Water and added sweeteners like corn syrup are allowed. With pure extract, nothing but alcohol is permitted. 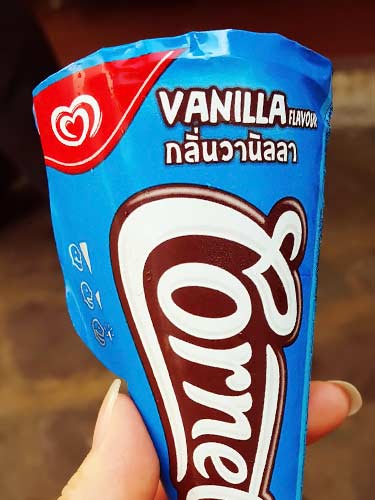 How much real vanilla bean gets used in “flavor” is unregulated.

Artificial flavoring can be made using vanillin; that’s the naturally occurring phenolic aldehyde which gives this spice its signature scent and taste. However, it can also be extracted from certain types of wood or even synthesized (artificially created). Imitation flavor will use those alternate sources, which are much cheaper than the real thing.

If you ever wonder why some wines and spirits naturally have hints of this spice, it’s because they absorb vanillin from the wood barrels they’re fermented in.

Because castoreum is derived from beavers, it qualifies as “natural” vanilla flavoring on the ingredients label. Fortunately, it remains a rare source. The wood-derived and synthesized versions are by far the most popular. (1)

Vanilla bean oil is made by steeping the beans in carrier oil, like jojoba. After several weeks, it becomes infused with the aromatic compounds which work well for uses in skin care, like face creams and lip balms. These oils are not edible. They’re sometimes called essential but more likely, one will encounter absolute for that misnomer. 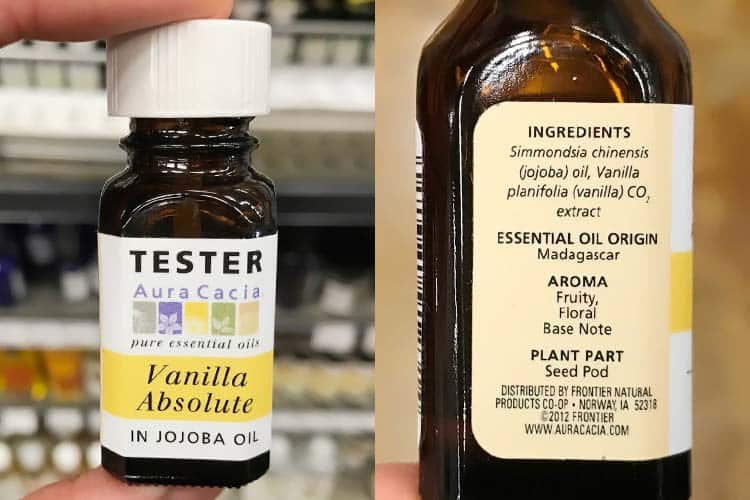 Vanilla absolute is the same thing as vanilla essential oil, or at least what’s most often marketed as such. It’s made using a solvent; ethanol or Co2. Since the latter leaves no residue behind, it’s the most comparable to a true steam distilled essential oil. When absolute is made using ethanol, it’s a glorified version of McCormick or Nielsen Massey extract that is bought at the supermarket.

Assuming one buys a high-quality brand, vanilla absolute will be thicker than extract, as that is a liquid like water. Absolute will have a syrup-like consistency. It’s the most concentrated naturally-derived form of the vanillin compound.

Is vanilla absolute edible? No, the absolute is only used for making perfume and scented beauty products. The percentage of vanillin in vanilla extract is 0.10% to 0.25% and that has remained consistent for over 100 years. Co2 extracted vanilla absolute can be up to 12% vanillin or even higher. That’s up to 10x or higher than the concentration found in the edible extract. (2) (3)

While it’s feasible that absolute could be made in a food grade form, no one manufactures it and even if they did, there may be dangerous side effects of consuming such a concentrated form undiluted. Double and triple strength extracts are the strongest sold for eating.

Vanilla oleoresin is not edible, so it should not be used in food. It’s a semi-solid concentrate that is similar to edible vanilla extract, except that isopropanol is used to make it instead of ethanol. This allows for the solvent to be removed after manufacturing, while preserving the essential oils in a sludge-like substance. It’s only used in soaps and candles, because the isopropanol is not something you should eat.

What they’re made from 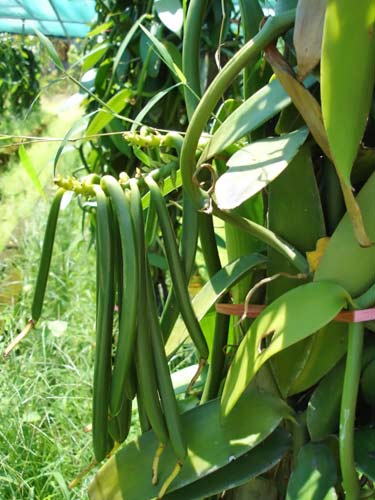 Whether it’s the oil branded as essential, the edible extract, or the concentrated absolute, all vanilla derivatives are made from the same part of the plant; the dried fruit which is commonly called a bean, because it resembles one.

As with so-called coffee beans, this plant is totally unrelated to the bean/legume family (Fabaceae). Vanilla is a type of orchid, from the plant family Orchidaceae.

Vanilla beans are the seed pods that form after the flowers are fertilized. Technically a fruit, cultivation of vanilla is difficult and time consuming. That’s why it’s the 2nd most expensive spice in the world after saffron.

With many types of essential oils, different versions made from the bark, leaf, root, and fruit are offered. The fact that all vanilla extracts, oil infusions, and other natural forms use the same part of the plant – the seed pod – is a bit unusual.

Since they’re all made from the same part of the plant, their potential benefits will be similar, since they contain comparable chemical constituents. The biggest variance between them is how concentrated these compounds are. Absolute will have the most, while “flavor” will have the least.

Even though they all have similar profiles, the ratio of compounds will vary between the different species and regions in which they are grown:

Mexican vanilla (V. planifolia) tends to be the most affordable and therefore, most common. It has a smooth and rich taste, which makes it highly adaptable for all sorts of recipes.

Tahitian vanilla (V. tahitiensis) grows in Niue and Tahiti. Since it has less vanillin content than the Mexican vanilla, it’s less flavorful and more needs to be used for achieving the same taste.

Bourbon-Madagascar vanilla (V. planifolia) comes from the same plant as the Mexican variety. The difference is that it’s grown in tropical climates such as Madagascar and Réunion. The latter was formally known as Île Bourbon and hence, where the name comes from. Bourbon and Madagascar are universally considered to be the best vanilla, because their growing climate leads to a sweeter taste. The Mexican is close, though it’s more woody and deeper.

While there are over 130 different chemicals that influence the taste and smell of this spice, roughly 85% of the volatile organic compounds are in the form of vanillin. The other 15% are what create the subtle nuances between country of origin and the species V. planifolia versus V. tahitiensis.

Not only is vanillin the most prevalent, but it’s also the most studied. The other two compounds in greatest concentration will be:

Since they’re only used for scent and topical applications, vanilla absolute essential oil benefits will be limited.

There is strong antioxidant activity which might help with oxidative stress on the skin’s surface. The vanillin in it has demonstrated antibacterial activity against E. coli, Listeria, and Lactobacillus plantarum in lab research. It is unknown if this antimicrobial activity has any effect in humans or animals. The scent of vanilla absolute, oleoresin, and bean oil infusions may offer anti-stress advantages, given that its aroma is typically considered to be pleasant and soothing. (7)

The best evidence of benefits comes from forms that can be eaten, such as extract and the whole dried beans. Those can be ground and used in recipes.

Dried vanilla beans have an ORAC value of 122,400, which is higher antioxidant activity than an equal weight of freeze-dried acai powder at 102,700.

Even at a minuscule concentration of just 200 ppm, a solution of vanillin tests as having up to 43% the antioxidant effect of vitamin A (beta-carotene-linoleate). The minor compounds of vanilla have an even greater effect. Hydroxy-3-methoxybenzyl and 4-hydroxybenzyl rank at 45-90%. (8)

During the 16th and 17th centuries, European doctors would use it as a purported remedy for stomach complaints and as an aphrodisiac or libido booster. Interestingly enough, these vanilla uses are similar to how African healers have used it throughout history, according to The Aromatherapy Encyclopedia which covers 385 different plant oils.

When it comes to proven benefits, there are none, as almost no human clinical research has been done. However there are new papers popping up every year which suggest it might have something to offer.

In a mouse model of psoriasis, researchers at a Taiwanese university found that oral consumption of vanillin reduced their skin inflammation and symptoms. (9)

Antidepressant activity in mice has also been observed, that was from a study out of India. Yes, there are rodent models of depression! (10)

On cultured neuroblastoma cells, vanillin appeared to have neuroprotective effects. They reported (11):

A completely different group reported that it could reduce tremors in rats, which is another disorder that has a neurological origin. (12)

If you search for the keywords “vanillin cancer” in the NIH’s PubMed database, you will see over 100 results.

Not all are on topic, but many are. They discuss in vitro (lab) research using cultured cells, where anti-cancer activity was observed with melanoma, liver, lung, and breast cancers, among other types. (13) (14) (15) (16)

To reiterate, this is all preliminary research and nothing has been proven. Vanilla oil, extract, and other forms should not be used for any disease.

While benefits remain speculative, vanilla is good for you due to all the things it doesn’t have. It’s gluten free, vegan, fat-free, sugar-free and has zero calories. This spice is a healthy way to add sweetness and flavor to your food, without anything to feel guilty about.

Its main essential oil, vanillin, is bad for you if it’s consumed in a non-edible form like vanilla absolute or oleoresin. Artificial vanilla flavor may not be dangerous, but some forms use solvents like propylene glycol which are controversial and often avoided by health-conscious consumers. The best way to enjoy this plant is by using organic vanilla extract and ground raw bean powder.