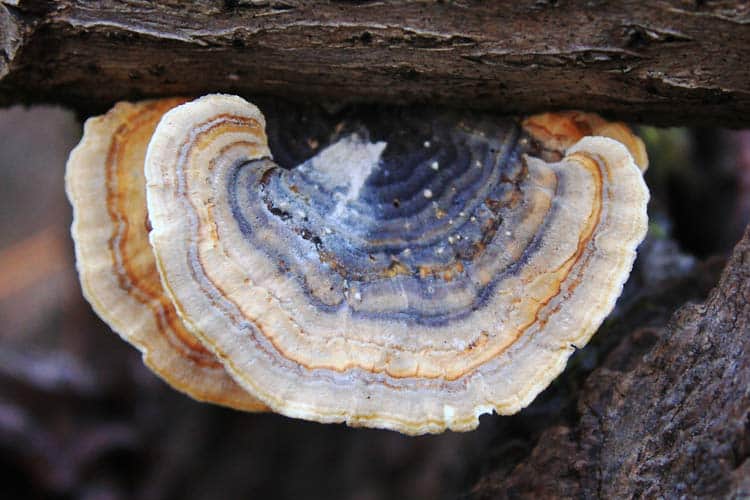 Q: Dear Superfoodly, I have heard that some mushrooms have anti-viral properties and was wondering if turkey tail mushrooms have been studied for colds, the flu, or perhaps even the coronavirus?

A: Along with reishi, cordyceps, and maitake, this species of fungi – scientifically known as Trametes versicolor – has been used in herbal medicine going back many centuries.

Literature from the 15th century, during the Ming Dynasty of China, described it as “a medicine that rejuvenates and extends life with chronic use.” (1)

There it’s known as yun zhi [雲芝]. Here we call it turkey tail, because the different shades of brown resemble that of a wild turkey.

As far as modern scientific research is concerned, most centers around in vitro (lab) and clinical research related to using turkey tail mushroom extract for cancers, concurrently with standard chemotherapy or radiotherapy.

In the United States, only small and preliminary trials have taken place. Extracts are not approved for any treatment. (2)

However in Japan, an extract known as polysaccharide-K (PSK) or krestin, is an approved cancer treatment. Since the 80’s it’s been used as an adjunctive therapy to strengthen the immune system to fight cancer. There, the polysaccharide-K is used for gastric cancer, breast cancer, lung cancer, and colorectal cancer among others. (3)

While many new medicines have come about since, it still is actively used there to this very day. (4)

How does turkey tail work?

So-called medicinal mushrooms, of which turkey tail is one, are all believed to stimulate the immune system in a similar fashion:

These actions have demonstrated not just anti-tumor properties, but also antiviral and antibacterial activity.

The biologically active compounds which stimulate these immune system responses are polysaccharopeptides (PSP). Polysaccharide K (PSK) is the most studied and likely, most active. (10) (11)

What’s fascinating about this species of fungi is that while it has medically proven benefits and usage for cancers, at least in Japan, there is relatively little research that has been done in the way of its antiviral abilities.

Coronaviruses are quite common in both animals and humans. While the rhinovirus causes anywhere from 30-80% of the common cold cases, did you know the 2nd and 3rd most common causes of the cold are types of a coronavirus? (12) (13)

However, those are distinctly different than the novel form which emerged in 2019 and is the cause of a pandemic; the COVID-19 human coronavirus.

There no research in humans, animals, or the lab as to whether turkey tail mushroom extracts have any effects on COVID-19. Anyone claiming or suggesting it can treat, prevent or cure the coronavirus is lying. There’s literally zero scientific support of that.

In terms of other viruses, here’s what research has been published so far in the PubMed database:

This was a lab study which focused solely on the mushroom turkey tail. Various extracts were tested on cultured human blood cells, to observe the immune-activating and modulating effects. (14)

These were the extracts used: 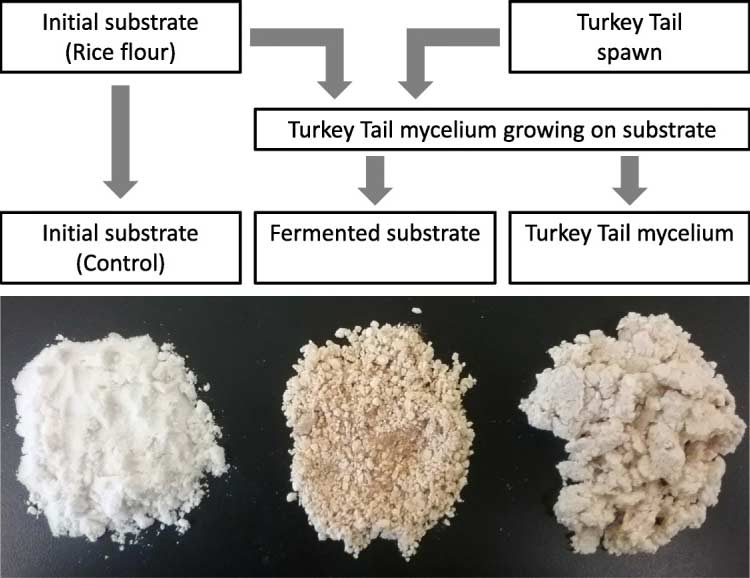 As you see, rice flour was used as a control (like a placebo) while different forms of the turkey tail were tested as a comparison. 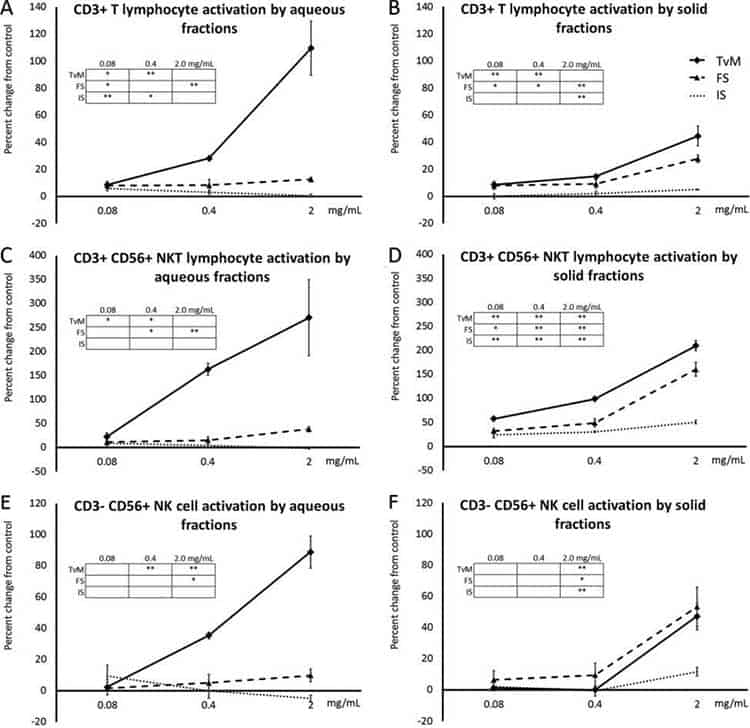 National Academy of Sciences of Ukraine – 2014

Antiviral benefits were seen and the scientists said:

“T. versicolor 353 mycelium [turkey tail] was found to have a high therapeutic index (324.67), and may be a promising material for the pharmaceutical industry as an anti-influenza and antiherpetic agent with low toxicity.” 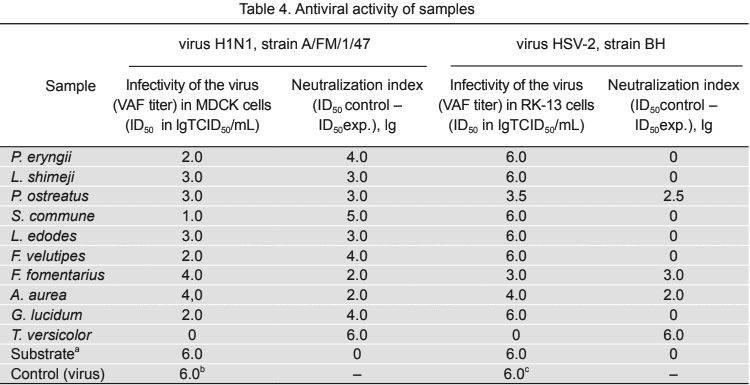 When cells were treated with these various mushroom extracts, you can see how good turkey tail (T. versicolor) performed, in terms of the infectivity of influenza and herpes simplex type 2 viruses. (15)

This was actually a human clinical trial which sought to evaluate the efficacy of turkey tail, lingzhi mushroom (Ganoderma lucidum), and hen/chicken of the woods mushroom (Laetiporus sulphureus) on the human oral human papillomavirus (HPV).

They tested 472 patients and selected 61 of them who were positive for the HPV16 or HPV18 virus.

Next, they split them into 2 groups:

With group 1, only 5% experienced clearance of their HPV infection. However with group 2, there was an 88%  clearance rate.

Keep in mind though that there was no placebo group and since group 2 was a combo treatment, it’s impossible to know which mushroom (if any) was responsible for the treatment outcome. (16)

This was a lab study which looked at 11 different species of fungi – including turkey tail – and their antiviral activity against type A influenza virus of birds (H5N1) and humans (H3N2). Cultured cells were used and antiviral benefits observed. (17)

It is true that Polysaccharide K (PSK) which is derived from turkey tail has generated billions of dollars in sales as an approved adjunctive cancer therapy in Japan. So the immune-stimulating effects from certain compounds in this fungi cannot be denied.

That said, it’s important to separate that from everything else.

Using turkey tail mushrooms for fighting respiratory viruses has not been studied. While there are a couple of basic studies demonstrating antiviral effects against some strains of influenza in the lab, it has not been tested in humans or animals.

There is neither lab nor human research on coronaviruses of any type, whether that be the types which cause the common cold or the novel COVID-19 form.

In short, taking mushroom supplements should not be done with the intention or expectation that they can treat, prevent, or cure any disease.

As a dietary supplement only, we do take mushrooms daily. We use a brand called Host Defense. They are the market leader in mushroom supplement R&D. It’s all they do.

We would strongly advise against unknown brands. Aside from dubious potency and ingredients, the thing about fungi is that they cannot be fully digested without being thermally treated or fermented first. As such, any raw mushroom supplements are a bad idea. 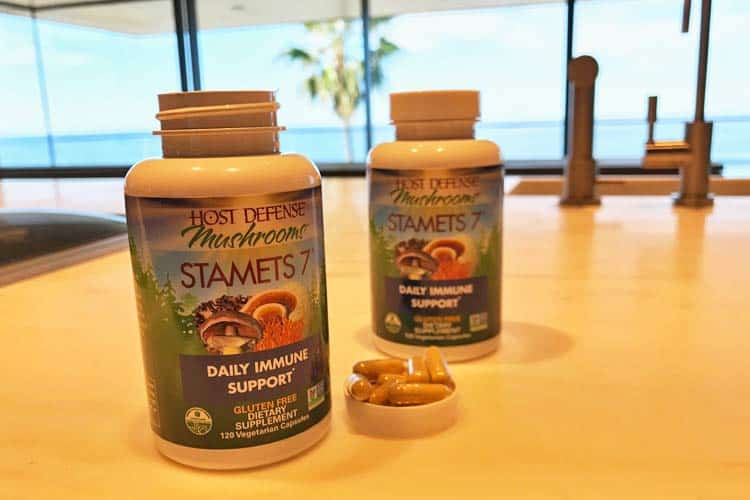 Above are pics of what we use. It contains reishi, maitake, lion’s mane, chaga, mesima, and royal sun blazei, but unfortunately no turkey tail. We take 2 capsules a day for general immune support and we buy it on Amazon.

Host Defense makes a highly-rated turkey tail mushroom supplement. Each 2 capsule serving contains 1 gram of extract, of which there’s at least 550 mg of polysaccharides. Since Host Defense grows their fungi on brown rice, it’s gluten free. You can read the Amazon reviews for it here.

To reiterate, these and similar are dietary supplements only, to be used for general health. They are NOT for the prevention or treatment of any virus. They do NOT prevent/treat/cure COVID-19 or any other virus.