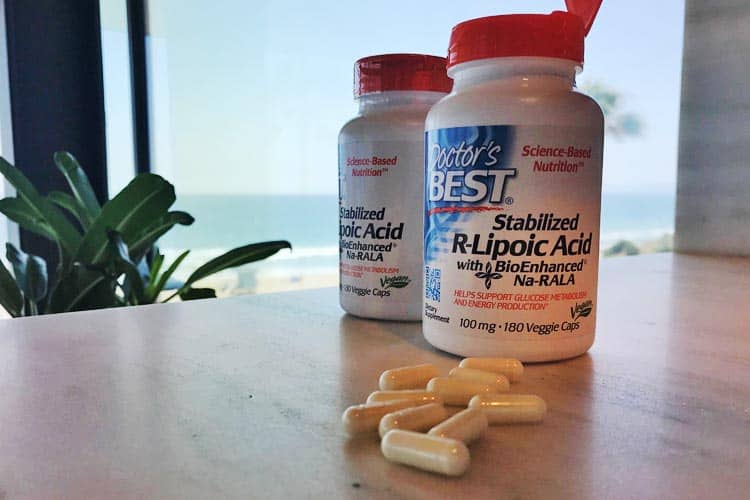 If you look at the list of alpha lipoic foods, it’s clear that relying solely on dietary sources is impractical. The richest food, spinach, only has 3.15 microgram (not milligrams) per gram.

Unlike many other phytonutrients which are plentiful from eating the right foods, it makes sense to take ALA supplements.  After all, it’s one of the most powerful antioxidants in the world.

Also known as just lipoic acid, it’s both fat and water soluble – meaning you can take it at any time. Research has found it neutralizes a wide variety of free radicals including superoxides, peroxyl and hydroxyl radicals, singlet oxygen, hypochlorite, and peroxynitrite. (1)

Or in plain English, it’s known as “the universal antioxidant.”

Free radical fighting aside, lipoic is made by the human body and it’s essential for the production of cellular energy. The only reason it’s not classified as a vitamin is because we do make it internally.

When supplementing with it, the pricing varies immensely between the various forms on the market.

Should you stick with a basic ALA supplement that has biotin to supposedly boost absorption? Go with the R lipoic fraction? Or should you pay a premium for the so-called Super R-Lipoic Acid from Life Extension?

What is Super R-lipoic acid?

Alpha lipoic acid consists of 50% “R” form and 50% “S” form. Only the R form is used by the body. Life Extension Super R-Lipoic Acid is a branded term for the supplement they sell. Each vegetarian capsule contains 240 mg of R-lipoic and there are 60 per bottle.

Technically, each capsule contains 300 mg of Na-RALA sodium R-lipoate, but that provides 240 mg of the R lipoic. There’s also 30 mg of sodium as a result.

Regular R-lipoic acid and Life Extension Super R-lipoic are basically the same thing. They provide the same active ingredient, which is the R form. The difference is branding, with the word “Super.” It is not a scientific term in this sense, merely marketing.

When compared to regular alpha lipoic, both Super R-lipoic and other brands of R-lipoic are a superior choice. They will provide you with more of the usable form for your body.

Is it really worth it?

On LifeExtension.com they sell Super R-lipoic bottles for $36.75 each. That means before tax, you’re paying $0.61 per capsule. True, there may be coupons depending on the time of year but even with a $15 off $75 purchase, which is the best we’ve encountered over the years, you’re still paying over $0.40 per 240 mg capsule.

The reviews of Super R-lipoic are quite favorable, as it’s been a bestseller of Life Extension for many years. On their site, user reviews rate it 4.7 out of 5 stars. While we personally don’t buy it, we do buy their Mitochondrial Energy Optimizer to take first thing in morning, which does contain 75 mg of it. We also buy their coffee. We have no complaints to share on either.

However when it comes to buying this supplement, we find it’s more cost effective to go with another brand of R.

Especially since ALA tablets or pills have a half-life of just an hour or two, and is only detected in your blood for about 4 hours after. (2)

As such, you may want to take it several times per day like we do. With that type of dosing regimen, you don’t want to be paying $0.61 per dosage!

Why you should take it

Whether it’s the more expensive Life Extension Super R Lipoic, or another reputable brand like Doctor’s Best, Jarrow Formulas, or Pure Encapsulations… pick whichever you like, it doesn’t really matter!

What does matter is that you take it.

While many – if not most – supplements on the market are largely scams, this one is not.

When using the total oxyradical scavenging capacity (TOSC) assay, even regular ALA has measured to have antioxidant activity greater than grape seed extract, quercetin, pycnogenol, and rutin among others. (3)

Studies on alpha lipoic supplements helping migraine headache sufferers have been promising. It’s even been reported in a statistically significant manner (P<0.05) to boost weight loss in slightly overweight as well as obese women. (7) (8)

To be clear, none of these are proven health benefits since it is a dietary supplement only. Nonetheless, it’s intriguing research.

On Amazon, this is the brand and dosage we buy.