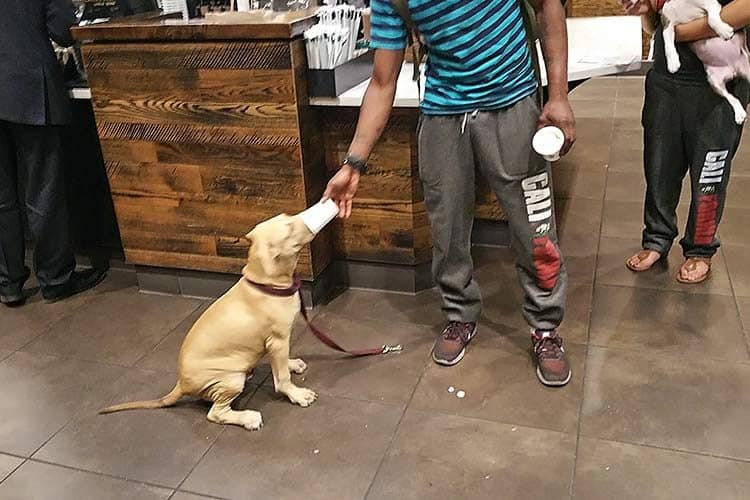 Starbucks Puppuccino Cost May Be Free, But Unsafe For Dogs

Dog-friendly fast food is hard to come by. Even a basic hamburger without cheese can cause farts galore for Fido. That’s because the digestion of greasy and high-fat foods is associated with excess flatulence in canines, as well as cats. (1)

If McD’s isn’t the answer, is the world’s most popular coffee chain a better choice?

Also known as a pup cup, this Starbucks secret menu item is exclusively for customers with dogs. It’s a tall coffee cup filled with whipped cream. The ingredients are cream, mono and diglycerides, and carrageenan. It’s not a real cappuccino or Frappuccino, as no coffee is included. It’s caffeine-free.

How much is it?

What a puppuccino costs at Starbucks is $0. It’s totally free. Since it’s only for pets, presumably you need your dog with you to order it, or be clear that you’re giving it to your dog waiting in the car or at home. While there have not been reports of customers being charged for a pup cup of whipped cream, it’s at the discretion of management. Their policies may differ by location.

Obviously, if someone ordered several at a time or abused the perk in another way, the cashier would likely decline, or have to charge for a drink which comes with cream on top.

Is it good for your dog?

Being that it’s not a standard menu item, nutrition facts for this doggy drink, or even their pure whipped cream, are not published by Starbucks.

However, you can figure it out using their website’s nutrition calculator.

When you can add and then subtract whipped cream to a regular Frappuccino, nutritional values for pure whipped cream can be calculated.

Per serving, a typical Starbucks puppuccino would be expected to have:

The low and high end of those values represents 1 and 2 servings of whipped cream, respectively. While some baristas give smaller amounts to smaller breeds, the typical we see is equal to around 1-2x the amount used to top a human Frappuccino.

But wait, it gets worse.

The above facts are for a “healthy” pup cup. Many locations add pumps of vanilla syrup – which is essentially flavored liquid sugar – when making them.

According to a discussion on Starbucks’ Reddit, a purported barista describes how they make a puppuccino:

“We make this whipped cream by mixing heavy cream and eight pumps of Starbucks Vanilla Syrup in a pressurized canister.”

The ingredients of the added syrup are:

While we haven’t seen it sold at their coffee shops, you can actually buy Starbucks vanilla syrup on Amazon by the liter. Per 2 Tbsp, there’s 19g of sugar listed on the label.

In total, that would be up to 400 calories and 44g of sugar you are giving your dog!

Glycemic overload isn’t the only bad thing about it…

You’ve heard the controversy about carrageenan. Did you know it might be even more dangerous to your pet?

These sulfated polysaccharides are extracted from seaweed. They’re said to be safe for humans in the amounts permitted, though research reports this common food additive may “lead to glucose intolerance” and “insulin resistance.” (2)

The degraded form of carrageenan, such as what might be produced during food prep and digestive activity, has been linked to “gastrointestinal ulcerations and tumors” in rodent studies. The World Health Organization IARC labels it a possible human carcinogen. In Europe, it’s banned from infant formulas. (3)

As for dogs and cats, remember their digestive systems are designed for a mostly carnivorous diet. That’s why it’s no surprise that they often suffer diarrhea and flatulence when given many types of human food.

Seaweed may be a natural food for a pet turtle, but not your Labrador Retriever or Yorkshire Terrier!

It’s no wonder there are “harmful gastrointestinal effects of carrageenan in animal experiments” that are reported. (4)

In fact, if you’re a regular reader of Superfoodly, then you already know how we report numerous animal studies which actually use carrageenan as a pro-inflammatory marker, in order to measure if a food/supplement offers an anti-inflammatory benefit.

Even if syrup isn’t added to the pup cup, the unsweetened whipped cream is loaded with carrageenan – a proven promoter of inflammation and something unhealthy for a dog’s digestive tract.

Carrageenan aside, this is beyond a high-fat food!

All fats are 9 calories per gram. There are 12g of fat in their single serving of whipped cream (120 calories). That means that 108 of the calories are from fat. Before sugary syrup is added, a puppuccino is 90% fat.

Remember what we said at the start about how fatty foods cause dogs to fart?

According to the American Kennel Club:

“Dairy products are a leading source of food intolerance in dogs, and many dogs are lactose intolerant.”

Side effects of eating cheese, milk, or a Puppuccino may include gas, vomiting, abdominal pain, loose stools or diarrhea. (5)

The fact that dogs don’t tolerate dairy well is no shocker.

Remember, mammals only consume milk during infancy. When they’re breastfeeding from their mother.

Among the 5,416 species of mammals, none consume milk past infancy.

Except humans. Which many would argue is unnatural.

Maybe that’s why “approximately 65% of the human population” has a reduced ability to digest dairy. (6) (7)

With up to 90% of the calories being fat for the unsweetened, and up to 44g of sugar per cup for the sweetened, a puppuccino is not good for your dog. Those factors, as well as the dairy and carrageenan, are an unsafe trio which promote flatulence, inflammation, and possibly even diabetes in your pet.

Nor are they healthy for humans, in more ways than one… 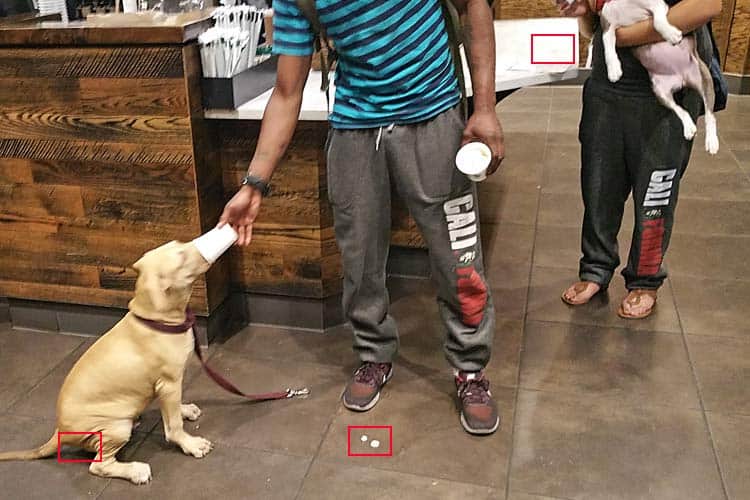 We snapped this pic at one of the most frequented Starbucks locations in Los Angeles. At Union Station, downtown.

On the right, you see a customer feeding their dog on the countertop. The slobber is dripping onto the very same surface you get your own coffee, sandwiches, and pastries. You know, those baked goods that are only protected by a thin paper sheet? Those get set on this counter, right in the slobber.

On the left, we have a gentleman feeding his pit bull the puppuccino. Notice the whip dropped on the floor, as well as the dog’s anus dragging across it, as the man was pulling the cup forward.

Whether these are alleged emotional support animals or not, we don’t care. The health department should really be putting the kibosh on these filthy shenanigans. They’re bad for the dogs and totally unsanitary for the humans!