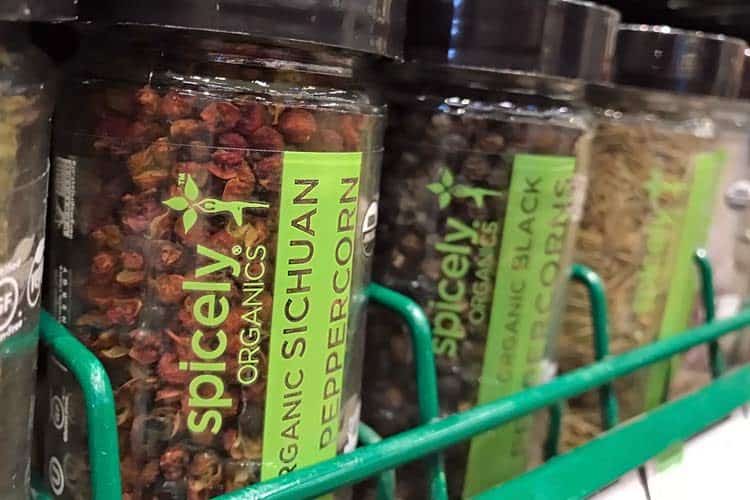 Are Sichuan Peppercorns Healthy or Harmful?

You know cayenne, chili, and definitely black pepper, but here’s one type you may not be familiar with. At least if you’re an American.

What is Sichuan pepper?

Called by the Chinese province of the same name, which is sometimes spelled Szechuan, this peppercorn is not related to chili or black pepper. It’s long been used in oriental cooking, including as part of the Chinese five-spice powder. Sichuan are the same size as black peppercorn, except they’re orangish-brown in color and have a husk that tends to crack or split open upon drying. 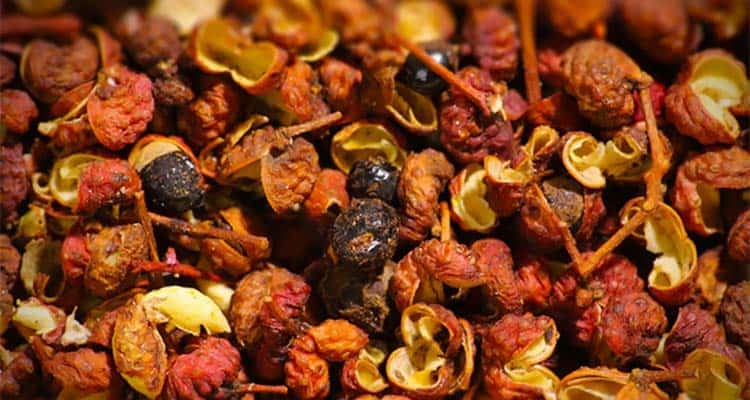 What Sichuan pepper tastes like is unique. It’s a hint of bitter citrus, with an almost metallic-like aftertaste. Since the peppercorns are often eaten whole, you get a gritty crunch. A Scoville rating for heat is not their claim to fame. Rather, it’s the tingling sensation they cause on your lips and tongue. It’s comparable to a light electrical shock. When served as ground powder, the numbing tingle and pungent lemon flavor is less pronounced. Their smell is often likened to lavender flowers, out of all things.

As with hot chili pepper, Sichuan is enjoyable in small amounts but eating too much can be unpleasant. 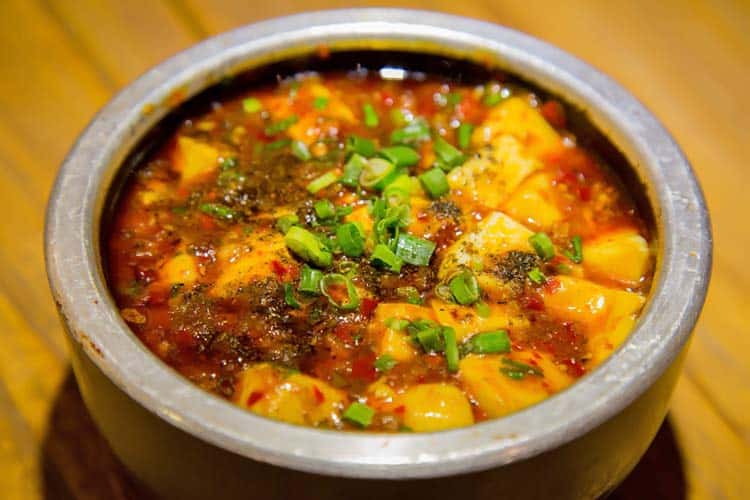 The peppercorns are often used for zesty meat recipes, such as those with chicken, beef, or lamb. Vegetarian and vegan dishes which make use of it include asparagus, green beans, tofu, shiitake soup, and noodle recipes. It’s never used for mild-tasting meals.

The plant genus, Zanthoxylum, is closely related to the citrus family. There are several different types which grow throughout the world that are used for spice. The exact species of Zanthoxylum used varies by region, with the Chinese typically using different ones than that of Taiwan, Nepal, Indonesia, Japan, Africa, and elsewhere.

Other names for Sichuan peppercorns include hua jiao, which means “green flower pepper” in Chinese. It’s often called Prickly Ash in America and Europe. The latter name usually refers to species which are different than those found in China.

What causes the tingle? 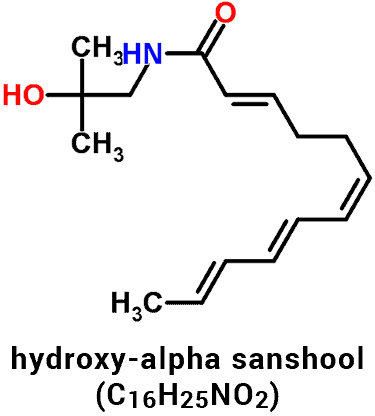 Hydroxy-alpha sanshool is a molecule exclusively found in the Zanthoxylum genus of plants. This molecule is why your lips tingle and your mouth goes numb when eating Sichuan pepper.

If you’ve ate this peppercorn before, then you know the feeling is best described as a light electrical shock. It feels like a physical vibration, as if your lips and tongue were exposed to a low electrical current.

Researchers have found that its sensation is equal to 50Hz. In other words, it’s the feeling of 50 vibration cycles per second in your mouth.

This is the exact same rate at which electrons vibrate on most power grids throughout the world, with the exception of the US which is slightly higher at 60Hz (60 cycles per second).

Even though it feels like an electrical vibration, the chemical is tricking your nerves. No vibration is taking place.

It’s similar to how the capsaicin in chili peppers gives you the false sensation of physical heat, even though none is produced.

Your lips are not literally vibrating when you eat the pepper. The hydroxy-alpha-sanshool in them is activating the same nerves chemically, which typically are only activated through physical touch/motion. (1)

Is Sichuan pepper good for you?

When consumed in normal amounts as a spice, there is no evidence to suggest that the hydroxy-alpha-sanshool in Sichuan peppercorns carries safety concerns. The side effects of tingling and numbness it causes are temporary and dissipate within minutes.

Preliminary rodent research suggests that the hydroxy alpha sanshool in the pepper may offer health benefits for stimulating movement in the colon.

A Japanese study using mice suggested it “may be a beneficial agent for the treatment of ulcerative colitis.” Crohn’s diseases and other inflammatory bowel diseases (IBD) were also mentioned. (2) (3)

In fact, it’s one of the ingredients used in daikenchuto, which is a traditional Japanese herbal medicine widely used in that country for gastrointestinal disorders. (4)

Sichuan peppercorns contain a high amount of antioxidants. According to ORAC values testing, they demonstrate over 300% more free radical scavenging activity than black pepper. When comparing equal weights of each, they’re also higher than acai and cocoa powders. At 118,400, their ORAC is almost as high as turmeric, which is 127,068.

Even though the tingling sensation produced by eating the spice is temporary, lab research reports that at least some Sichuan pepper species are cytotoxic (toxic to cells) and genotoxic (damage genetic information).

In one study, a type of white blood cells (leukocytes) were gathered from healthy donors.

These cells were tested in Petri-dish like experiments, where they were exposed to various concentrations of Zanthoxylum zanthoxyloides. Also known as Senegal prickly-ash and artar root, it’s a species found in Africa.

The graph on the left is for Tapinanthus globiferus, which is a type of mistletoe. That didn’t show any toxicity at the tested concentrations, “suggesting that it can be consumed safely at relatively high concentrations.”

However the same wasn’t said about the peppercorns.

At the highest dosage of 150 µg/mL – which is merely 0.015% – the extracts “showed genotoxicity and cytotoxicity effects, therefore are not safe for consumption.”

The bars show what percentage of cells are living. You can see how that 150 bar on the right is lower than the Crtl (control) on the left. Meaning, more cells died.

This difference is considered statistically significant. (5)

There are several species which are used as Szechuan pepper spice. Zanthoxylum simulans and Zanthoxylum bungeanum are two of the most common in Chinese cuisine. Fortunately, there isn’t evidence yet that those are toxic to cells. However, most tests involve isolated compounds from the plant, rather than testing all of their constituents. (6) (7)

To be safe, eating high amounts of Sichuan peppercorns should probably be avoided until more data is published on the potential for DNA damage and carcinogenicity, for the species typically consumed.

The PubMed database does not contain any case studies reporting a Sichuan pepper allergy. However, there is a study out of South Korea reporting that Zanthoxylum schinifolium, which is used as spice, has a phototoxic effect in mice. That means it increases the skin’s sensitivity to light, especially for sunburn risk from UV exposure. (8)

Eating Sichuan pepper while pregnant should be avoided. It has not been studied during pregnancy in humans or animal. In Traditional Chinese Medicine, they avoid the hua jiao spice during pregnancy. There isn’t research on eating the pepper while breastfeeding, either.

With the exception of Chinese grocers, finding Sichuan pepper for sale in Western countries like the US, Canada, and UK can be difficult. At a large Whole Foods location in California, we only found it for sale by one brand; Spicely Organics. 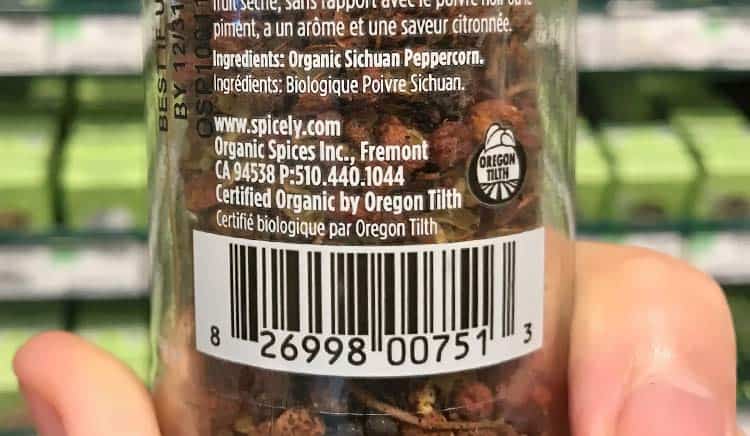 Broadening your search to regular grocery stores, like Walmart and Safeway, will probably leave you empty handed altogether. Many don’t carry it at all.

We recommend the brand Valle Sol Organix and their red Sichuan which you can get on Amazon. They also sell the less common green Sichuan in a 2 oz bag.

What can I use in place of Sichuan pepper?

If your recipe calls for it and none is available, the best substitute to recreate the flavor of Sichuan will be equal part black pepper and coriander seed. These will produce the bitter lemony taste, but will not recreate the tingling sensation. You only get that with the real thing.