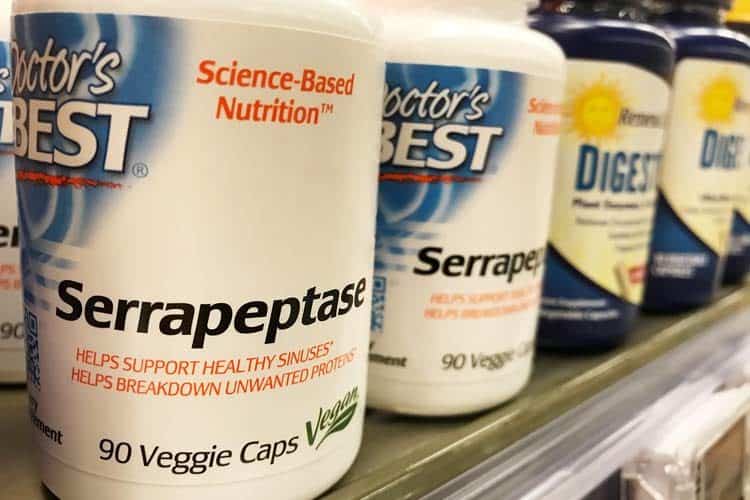 There are countless dietary supplements purported to help with weight loss, joint pain/arthritis, and cardiovascular health.

But how many are touted for your lungs?

Serrapeptase happens to be one that is.

Yes, it’s also believed to help with those other things listed above. Yet, many of the purported health benefits are related to breathing; asthma, allergies/rhinitis, coughing, COPD, and pulmonary fibrosis.

Let’s review the research to gauge the legitimacy. To be clear, none of the uses are considered proven and as such, it is not intended to diagnose, treat, cure, or prevent any disease.

Serrapeptase is an enzyme made within the intestines of Chinese silkworms. They use it to breakdown their cocoons, so they can emerge as moths. The name comes from the species of bacteria which produces it; Serratia.

Other names for the enzyme include serratia E-15 protease, serrapeptase, and serralysin.

Even though it’s found in the intestines of silkworms, most serrapeptase supplements are vegan, as long as they use non-gelatin capsules. That’s because it’s typically made in a lab, by growing Serratia E-15 bacteria which naturally produce the enzyme.

What does serrapeptase do? 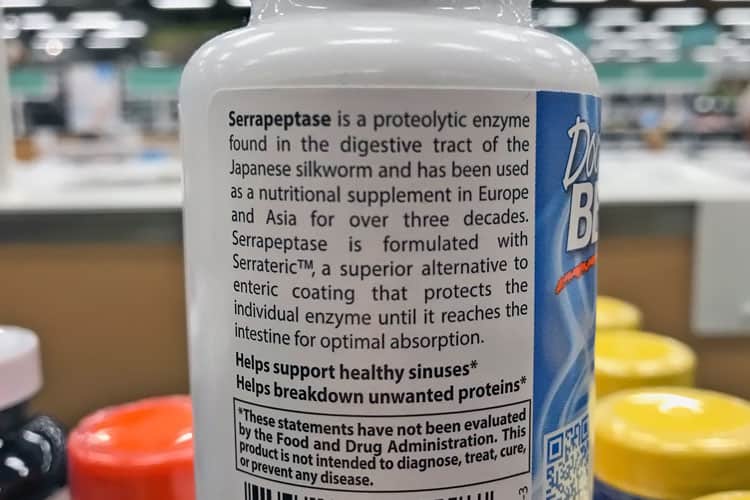 It’s what’s known as a proteolytic enzyme. That means it breaks down certain proteins when it comes in contact with them. It is believed to only dissolve non-living tissue. It may help dissolve mucus, phlegm, and fibrin. The latter is a by-product of blood clotting.

Dead tissue from injury, arterial plaque, blood clots, and cysts all contain and/or produce proteins which science suggests may be mitigated by this enzyme.

Using serrapeptase for inflammation and pain may work through this mechanism. By accelerating dead tissue removal, the swelling subsides and that will lead to less pain.

In vitro (lab) research has found that it reduces biofilm on bacteria. As such, it may increase the effectiveness of antibiotics by breaking down that barrier.

Even though serrapeptase does not help the root causes of asthma, cystic fibrosis, and sinus discharge, by decreasing the viscosity of mucus, it is believed that it may improve symptoms and help with breathing.

Congestion caused by colds, the flu, and respiratory infections may benefit from serrapeptase.

This enzyme was discovered in the 1960’s and has been used as an herbal remedy in Europe and Asia ever since. (1)

There are countless serrapeptase reviews by asthmatics claiming it helps them breathe easier. One such patient was even profiled in the UK’s Daily Mail newspaper.

Being a straight-A student, the 18 year old male excelled at other areas of his life but just couldn’t get his asthma attacks under control. Steroids worked but caused side effects for his type 1 diabetes (higher blood sugar).

His doctor put him on Asthma Ease mouth spray, which is a product that used silkworm enzymes as the main ingredient. Within a week he said:

“I was still having to take my asthma inhalers, but I felt I could lead a normal life again.”

Meaning, without corticosteroids. Serrapeptase works rapidly or appears to. By week 3, he was back at the gym with “no difficulty” breathing while on the treadmill.

The benefits could also be measured quantitatively; peak flow readings for lung capacity went from 380 to over 400 within a short time period. (2)

There are many glowing reviews like for the serratia E-15 protease and asthma improvement. While that Daily Mail testimonial references a specific brand, you will see similar for other products, including oral supplements you swallow.

When it comes to human clinical trials of using serrapeptase specifically for asthma, there aren’t any.

However, there are several related which support it may help certain symptoms.

One of the earliest was from 1983 and conducted by a Japanese university:

Asthmatics “were excluded because of their unstable condition” which would make measuring results difficult. Not because the potential benefits weren’t relevant to them. 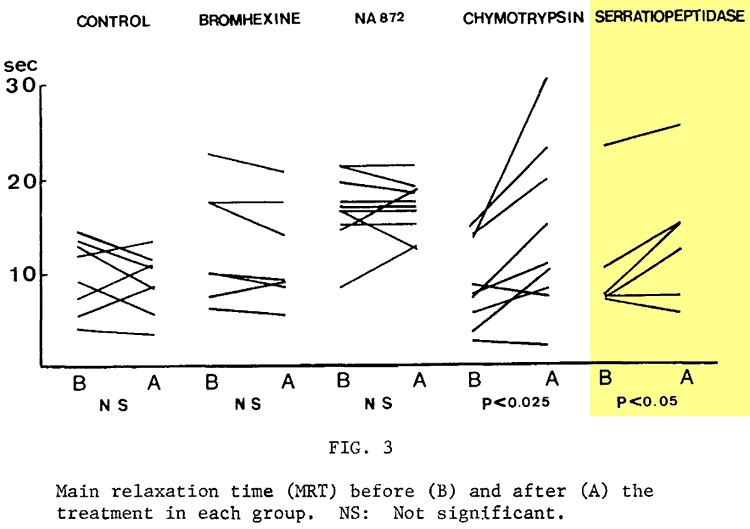 When compared to placebo and medications, it was concluded that a 30 mg daily dosage of serratiopeptidase was effective at breaking down the substructures of mucus. The results were statistically significant. (3)

In 1990, a much larger double-blinded trial out of Italy involving 193 people with chronic otolaryngology disorders reported that with serratia peptidase tablets, there was a significant regression in symptoms after 3-4 days of treatment. (4)

A 2003 trial out of Japan enrolled 29 people with chronic airway diseases. These people were older, averaging in their late 60’s. Some had COPD like symptoms from a history of smoking.

15 were treated with 30 mg daily of the silk worm enzymes administered orally, while the other 14 were given placebo.

Sputum is the technical term for saliva and mucus coughed up from the respiratory tract. High amounts typically come from COPD and similar lung diseases. After 4 weeks of taking the enzyme dosage, significant improvements were reported with (5):

Unfortunately given the inherent instability and wild fluctuations in symptoms that asthmatics experience, they have thus far been excluded from clinical trials.

That said, there is good evidence that using serrapeptase supplements with asthma might make breathing easier, by helping to keep mucus at bay.

The 2003 study emphasizes that:

“In rats and dogs, SER [the enzymes] are absorbed from the intestinal tract and transferred into the circulation in an enzymatically active form after intraduodenal or oral administration.”

It’s that’s happening in humans, it’s easy to see why such an effect may help asthma.

Of course, the wheezing of an attack is totally separate from whether or not mucus is present. Still, having excess amounts present can only make the attacks worse, not better.

Even though they’re anecdotal, the many positive reviews and testimonials of using serrapeptase for asthma are hard to ignore. Some people are even adamant it helps their cats’ asthma, but those claims are a bit dubious since feline friends obviously can’t speak!

Given its well-documented benefit of helping to breakdown the substructures of mucus, it’s clear why serrapeptase may benefit chronic rhinitis and seasonal allergies. As with asthma, there’s limited formal research specific to those circumstances.

There is one human clinical trial of using the enzymes specifically for adults with chronic sinusitis. It’s from 1988. Conducted by the otolaryngology department at a Japanese university, this is how it worked: 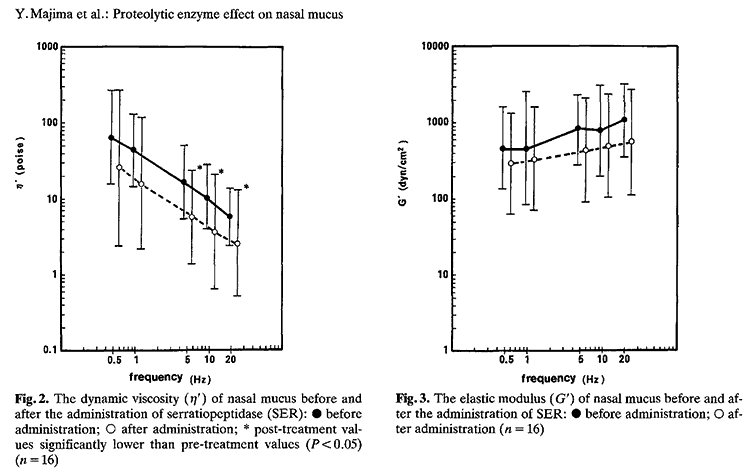 Both the viscosity and elasticity of nasal mucus was improved. (6)

Even though it’s not conclusively proven to be effective, due to the limited amount of research, serrapeptase supplements may serve as a useful cornerstone of an anti-inflammatory and anti-mucus diet for allergy sufferers.

There is no evidence it increases mucus production, only decreases it. As with asthma, that can only have a positive effect for people who suffer from a constantly runny nose, or post-nasal drip in the throat and mouth.

Generally speaking, there is little evidence of serrapeptase causing adverse reactions when a therapeutic oral dose of 30 mg (or less) is taken daily. Liver and kidney damage have not been documented. There may be side effects related to certain skin conditions, like dermatosis and erythema, as well as blood coagulation. Safety studies in pregnant women or those who are breastfeeding has not taken place.

A similar enzyme, nattokinase, has been studied for dissolving bloods clots. The thinning effect is well-documented.

As far as using nattokinase and serrapeptase together, only a couple pieces of research exist and they are related to Alzheimer’s disease; potentially having a positive effect on degrading amyloid plaque deposits in the brain. Whether they have a synergistic and more profound effect on blood coagulation is unknown. When combined, they may be more dangerous in terms of their blood thinning side effect. (7) (8)

Since serrapeptase may interfere with blood clotting, anyone with a bleeding disorder should consult their doctor before using this supplement. It should also be counted among the supplements to avoid before surgery, for at least 2 weeks prior. (9) (10)

The best serrapeptase to buy

There are two ways to use it; as a capsule/tablet you swallow and as a mouth/nasal spray.

The latter would make direct contact with the mucus and seems like an option for that which is localized to the nose and throat – e.g. sinus allergies, asthma, COPD, pulmonary fibrosis.

As far as tablets, if they work, they would need to be enteric coated. Otherwise the stomach acids would destroy them, before being absorbed by the intestines.

If you’re going to buy it, go with either a serrapeptase enteric coated tablets or a spray.

Doctor’s Best makes a high potency serrapeptase supplement which uses Serrateric, a branded name for their formulation which they claim is…

“…a superior alternative to enteric coating that protects the individual enzyme until it reaches the intestine for optimal absorption.”

Their capsules are vegan, non-GMO, and gluten free. You can buy them on Amazon.

Hardly anyone makes sprays. That Asthma Ease mentioned in the Daily Mail piece is no longer available. Apparently there just isn’t enough demand for sprays and liquids. The brand Nutra Lingual sells a sublingual liquid version for direct application under your tongue. Here’s the link for that.