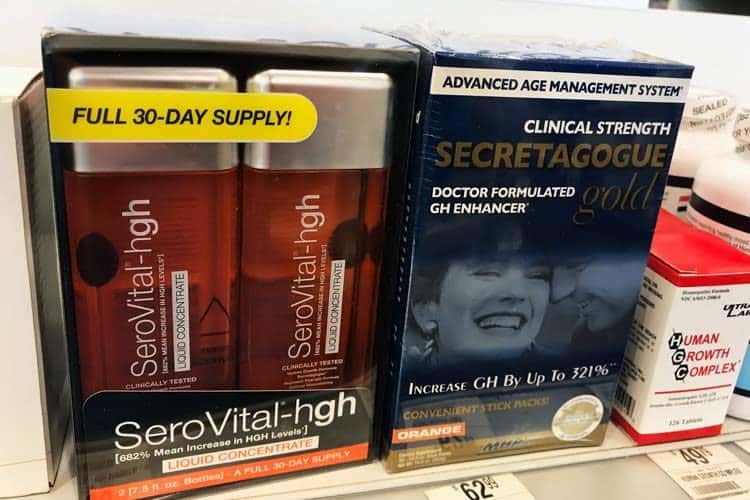 Secreted by the pituitary gland in the brain, human growth hormone (HGH) is vital to life.

It causes the liver to secrete IFG-1, which in turn creates chondrocytes (cartilage cells) that results in bone growth.

It can’t make you taller than the height you’re genetically predisposed to, but if you get too little during childhood, your growth may be stunted.

Regardless of age, HGH plays an important role in body composition, lean muscle mass, and skin texture. In part, it’s why those three things take a turn for the worse as we get older. 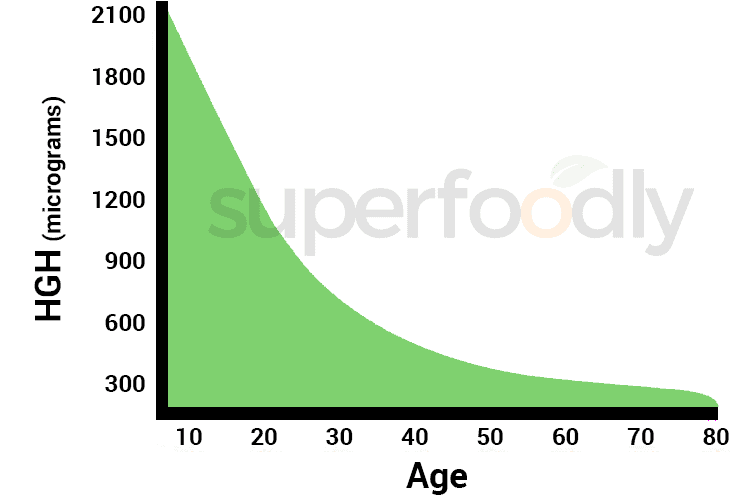 The question isn’t whether or not higher HGH levels correlate with a better aging process.

Rather, it’s what is the best way to boost HGH levels?

Maintaining a lower body fat percentage, high intensity exercise, and fasting are just a few of the lifestyle choices one can make to naturally increase HGH levels. (2) (3) (4)

All helpful, but unfortunately, not all are practical with daily living.

With some jobs, you may actually be endangering the lives of others if you are fasting and unable to perform at your full mental and physical capacity.

HGH pills – even if prescription – may seem like a good idea.

Sorry, there’s no such thing!

That’s because HGH can’t be absorbed orally. It can only be injected. That brings the likes of Cenegenics and similar “age management” programs, which cost up to thousands of dollars per month and require constant trips to a doctor’s office.

Even if you have the money and time for HGH injections, there are safety concerns. Some speculate that augmenting with actual HGH may lead to the pituitary gland producing less over time; it gets used to not having to make as much, since it’s being supplied elsewhere.

The other option is supplements.

They don’t contain HGH. Rather, they purport to contain ingredients which spur the pituitary gland to produce more of it.

What is Secretagogue Gold?

Secretagogue Gold is a dietary supplement manufactured by Maximum Human Performance (MHP) and formulated by Dr. Vincent Giampapa, a plastic surgeon and anti-aging researcher. Sold as orange drink packets, the ingredients are marketed as being able to increase growth hormone levels by up to 321%. 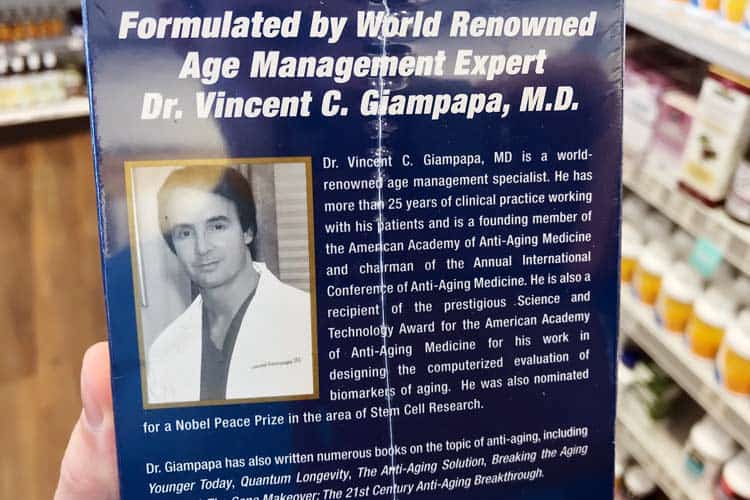 The word “secretagogue” is an actual term in endocrinology. Its definition is a substance that causes another substance to be secreted. Pills that promote the release of insulin are often called this word.

Presumably, MHP named their product that word, in reference to it promoting the release of HGH.

Marketed as Clinical Strength Secretagogue Gold, the box’s label lists over 30 different ingredients. These include specific amino acids, vitamins, minerals, and plant extracts. Additionally, there is an effervescent orange flavoring. 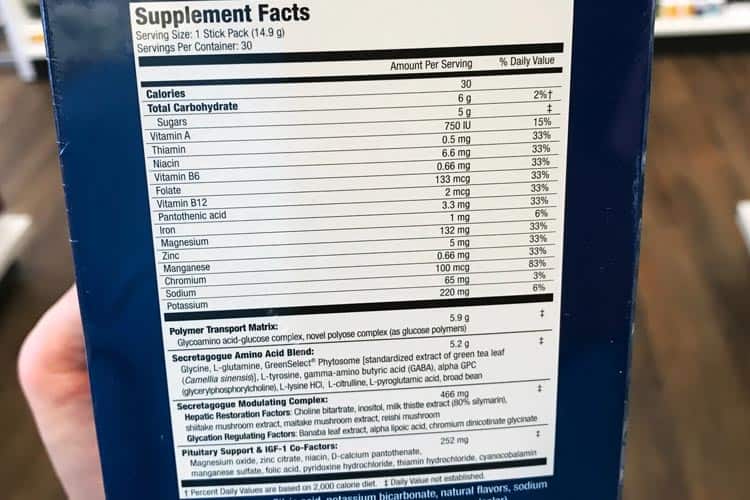 With the exception of the vitamins and minerals, whose exact amounts are listed, the amino acids, “hepatic restoration factors,” and “pituitary support & IGF-1 co-factors” are each listed as complexes.

So for example, you don’t know how much L-citrulline and GABA – two amino acids – there are inside each packet. We are only told that in total, the amino acid blend is 5.2g.

“Certain glands use unique combinations of amino acids and nutrients to trigger desired responses and hormonal secretions. By combining specific amino acids in precise ratios with other synergistic nutrients at the right time, the pituitary gland can increase HGH secretions without prescriptions or injections.”

It goes on to say that MHP Secretagogugue Gold ingredients are “well researched” and “extremely safe” in a balance that stimulates HGH production while suppressing somatostain, which is a hormone that inhibits the release of HGH.

Being that it’s “well researched” one would expect to see clinical trials on the supplement.

A search of the nearly 30 million medical citations on PubMed yields 39 results containing the name of this supplement. 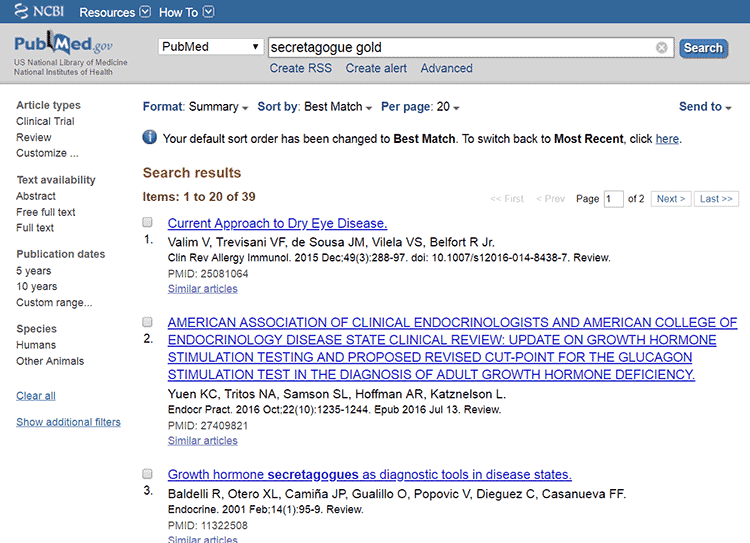 Unfortunately, Secretagogue Gold reviews and studies are nowhere to be found. Well some of the results are about HGH, peptides, and secretagogues, none are in reference to this product.

For example the first result you see titled “Current Approach To Dry Eye Disease” showed up because it said “there is no gold standard” and used the word secretagoguges, in the dictionary sense, as a treatment option.

On the supplement’s website, there is a “clinical studies” tab but when you click on it, all it presents are a few paragraphs about the work of endocrinologist Dr. Daniel Rudman and his research on HGH. It talks about a study he did involving 26 men, ranging from 61-80 years old, who received injections 3x per week for 6 months.

At the end, they had an 8.8% improvement in lean body mass and lost 14% of body fat, without diet or exercise changes. Additionally, they had better looking skin, more energy, higher libido, and other health benefits.

That’s great and all, but HGH injections are not the same thing as this supplement.

These are two of the bestselling supplements for purportedly increasing HGH production.  Both contain blends of amino acids, among other ingredients researched for anti-aging, longevity, weight loss, and bodybuilding. 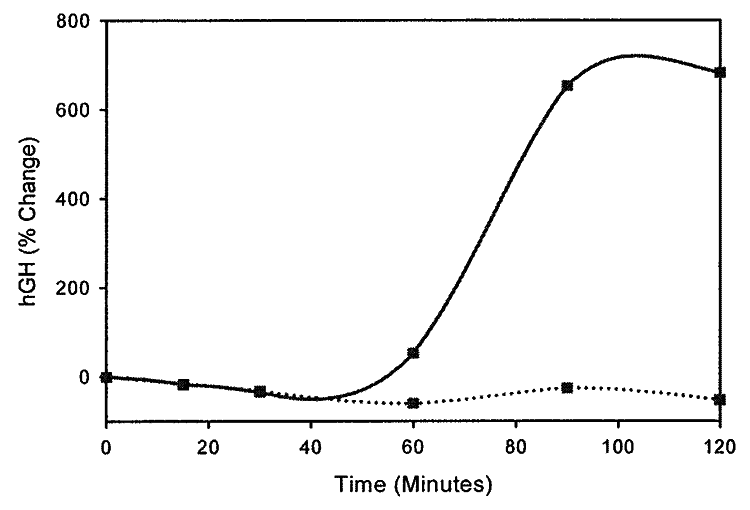 The marketing for SeroVital supplements says it increases growth hormone by up to 682%. That number was based on a single human study involving 16 adults who had that much higher HGH levels, on average, two hours after using a single SeroVital dose. The graph from their patent filing is pictured above. 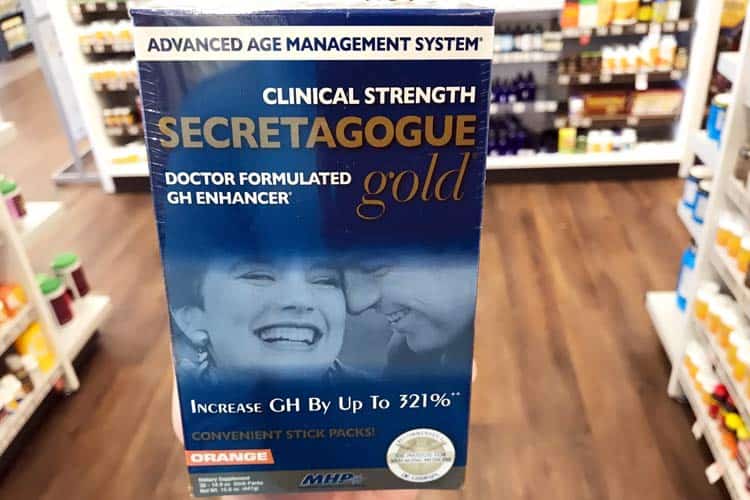 The box for Secretagogue Gold says “increase GH by up to 321%.” When you look at the what the asterisk corresponds to, it’s the boilerplate FDA disclaimer about “these statements have not been evaluated…” Most likely there is some study or research that number is in reference to, but it’s not something we are able to find.

If you’re debating between Secretagoguge Gold or SeroVital, the latter may be preferable because at least there’s more available data on the formulation and its effects. You can get SeroVital on Amazon and The Vitamin Shoppe.