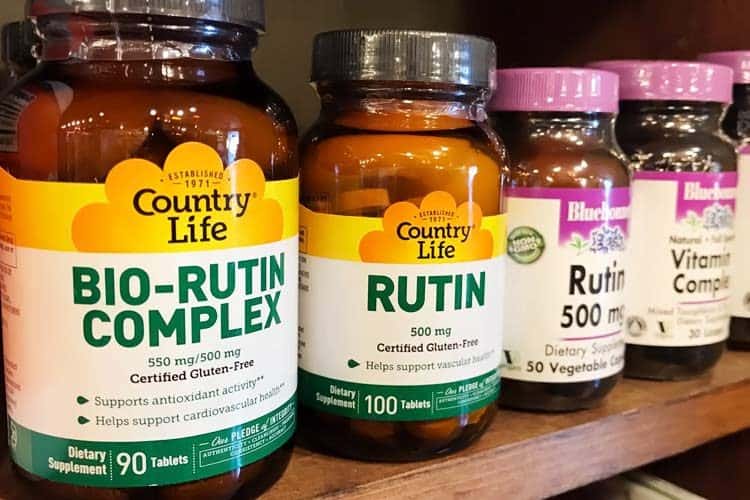 Rutin is a yellow flavonoid (plant pigment) found in many foods including capers, olives, buckwheat, and raspberries. Technically the molecule is a combination of quercetin and disaccharide rutinose.

The latter is likely a foreign word, though you’ve probably heard of quercetin.

Aside from being a powerful antioxidant, research suggest quercetin may offer benefits for inflammation of the joints, allergies, asthma, cancer, high blood pressure, and other diseases/conditions. For details, check out our piece on quercetin foods.

Even though it contains quercetin, rutin is not the same thing.

Also called rutoside, sophorin, and quercetin-3-O-rutinoside, the health benefits of rutin may include:

Even though it’s not a proven effective treatment for any disease/condition, the preliminary evidence suggests it may have real potential for a number of these conditions. However, others remain more theoretical with a lack of formal research.

There are countless creams and serums on the market which moisturize your face. Many do little to nothing beyond that.

With rutin for skin, improvements have been validated in a South Korean double-blinded human clinical trial. A total of 40 middle-aged people used a rutin skin cream for 4 weeks. It was reported that…

That means it boosted collagen production.

They go on to talk about the antioxidant protective effects seen, too. Those were in a dose-dependent manner. Skin elasticity, wrinkle size, and the number of wrinkles were reduced with rutin. (1)

Above are a couple of the graphs from the study. They show how the flavonoid beneficially influenced the growth of collagen and dermal fibroblasts, which strengthen the skin.

UV light causes oxidative stress. This in and of itself could be helped by topically applied forms of it.

It may help in other ways, too.

Scientists in Brazil have found that as an alternative to synthetic chemicals, natural gelatin nanoparticles encapsulated in rutin boosted the SPF performance by 48% when added to sunscreens. (2) 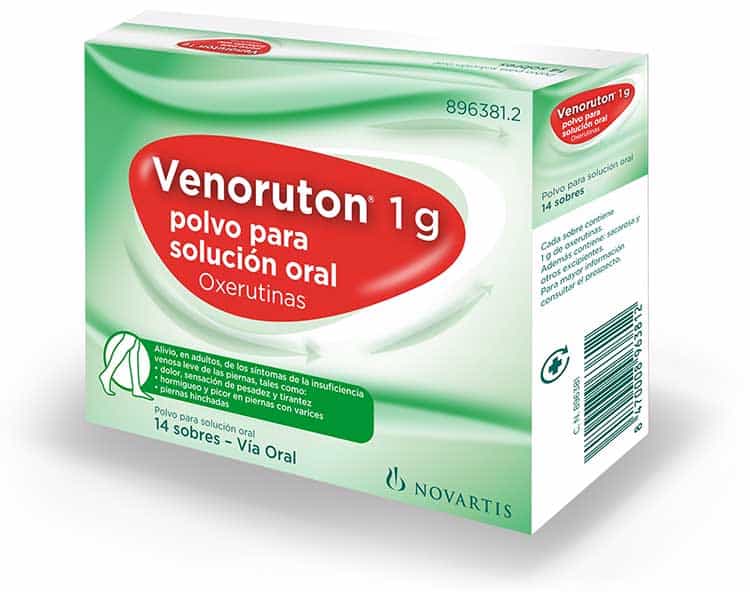 Venoruton tablets and gel are an over-the-counter medicine sold by Novartis. Its active ingredient is a semi-synthetic form of rutin (O-(beta-hydroxyethyl)-rutosides).

In an 8-month study of patients with severe chronic venous insufficiency (CVI), each person received a daily dosage of 1g, 2g, or none at all. Additionally, they all wore specialized compression socks which are commonly used for this condition.

While all experienced improvement, the best results were seen with the highest dosage of Venoruton. The socks alone were the least effective treatment. (3)

There’s even a 5 year controlled study which reported better outcomes for CVI sufferers. (4)

4. Edema and leg swelling while flying

Microangiopathy is a disease affecting the small blood vessels, where the walls grow too thick and weak.

Those with diabetes and high blood sugar are common sufferers.

Microangiopathy is a risk factor or worsening factor for dementia, Parkinson’s disease, strokes, seizures, vertigo, incontinence, and the list goes on. (5) (6)

Ankle swelling and edema are common side effects of microangiopathy when flying long distances.

A study was conducted with 20 people who had varicose veins and moderate chronic venous insufficiency. Another 18 of the same age and gender were used as a control group.

The yellow boxes above are for the group taking the rutin supplements. Not that you’re expected to understand these parameters, but you can see how the numbers – which are all measures of circulatory health – are way different than that of the control group.

In plain English, the Venoruton appears to have helped prevent edema and blood vessel problems during the long flights. (7)

Not only are there numerous studies reporting benefits, like less swelling of the legs and ankles, but there’s also a placebo-controlled and randomized trial which confirms that rutin reduces free radicals in patients with chronic venous insufficiency (CVI) and venous microangiopathy. (8)

Might it be the next hot diet pill ingredient? 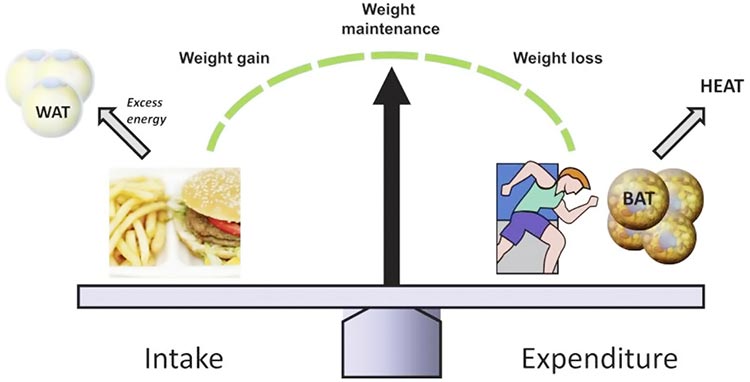 Better known as brown fat, it expends energy your body can use. This is different than white adipose tissue (WAT), which is more geared towards long term energy storage.

In other words, WAT is bad fat. BAT is good fat.

Human trials have not been done yet but in rodent models, supplementation with rutin has been found to decrease obesity by creating a better balance of BAT vs. WAT composition. (16) (17)

Clinical studies of using rutoside in some form or fashion for hemorrhoids dates back all the way to 1970. (9)

Most use the same active ingredient of Venoruton. That’s a derivative form of rutin developed by the French and Swiss in the 1960’s.

In 1986, the first double-blinded and randomized trial was published. A total of 40 patients were treated with a 4 gram capsule dosage taken daily, or a placebo. It was reported (10):

“O-(beta-hydroxyethyl)-rutosides induced a statistically significant reduction of pain and bleeding; placebo did not induce any significant improvement.”

The trials during the 1990’s through 2010’s used flavonoid mixtures containing rutin, or fully synthetic versions. You can’t fairly compare those to natural rutin foods and supplements. Yet those too may help hemorrhoids, given that they’re almost molecularly identical. (11) (12) (13)

The larger blood vessels that have swollen and twisted are varicose. Spider are similar but smaller. Their causes are often identical; weak arterial walls with plaque build-up, both of which are factors that make them fragile.

There was also a control group of people with similar health who did not receive any treatment.

As with most trials involving this flavonoid, they used a semi-synthetic form; O-(ß-hydroxyethyl)-rutosides.

Not that one is expected to understand them, but several well-known metrics of vein health were measured before and during the trial; laser Doppler skin flux, transcutaneous PO2 and PCO2. 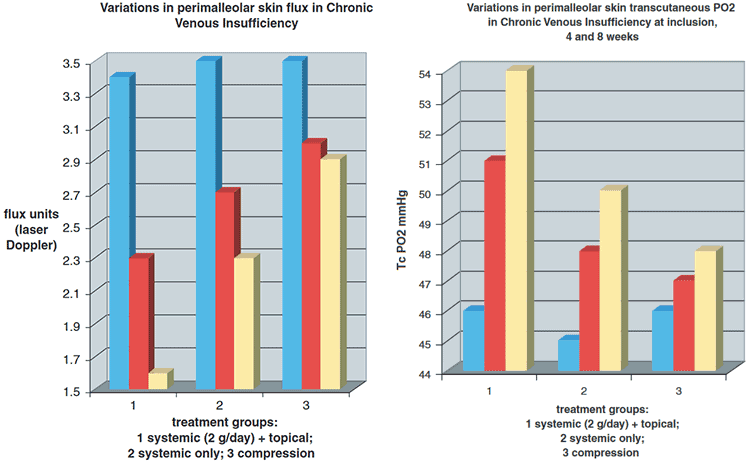 At the end of the 8 weeks, the best improvement was seen in the group who used rutin for spider veins both topically and orally. But even the group on the oral supplement alone did better than those on compression socks. The results were considered statistically significant. (14)

9. Better for dogs than quercetin

A number of high-end dog foods add quercetin as an antioxidant, yet bioavailabilty of it in canines wasn’t tested until just this decade.

The University of Leipzig in Germany compared the bioavailability of quercetin in adult beagles and found only 4% of it was absorbed.

Then they tested other forms containing quercetin; glucorhamnoside (rutin) and 3-O-glucoside (isoquercitrin).

Isoquercitrin had about 1.5x better absorption than normal quercetin, but the best absorption came with the rutin form. (18)

“The latter observation is in clear contrast to findings in human subjects, pigs or rats and might indicate that rutin is a better source of quercetin in dogs than in other species.”

10. Treating cats that have chylothorax

Their bioavailabity hasn’t been tested, but something else has.

Chylothorax is a rare disease for felines. It’s when lymphatic fluid builds up in a cavity between the chest wall and lungs.

The main side effect is difficulty breathing. Sometimes the cats with chylothorax look like they’re holding their breath.

While it’s not considered a first-line or go-to treatment, there are several pieces of published medical literature which report rutin for cats being used successfully in the treatment of chylothorax.

The Department of Veterinary Medicine at University of Missouri-Columbia published a paper saying:

“Four cats with idiopathic chylothorax were given rutin. Three of the 4 cats had clinical improvement, and complete resolution of chylous effusion was evident in 2 cats.”

What makes this natural remedy so special is that the condition is hard to resolve with modern medicine or surgery. So it’s not like there are other good alternatives out there for it. (19)

Other potent whole food sources include cherry tomatoes, fenugreek seeds, green tea, and many types of berries, including blackberry and mulberry.

Contrary to what many sources report, apples are actually a poor dietary source of rutin. The amount per 100g (3.5 oz) serving actually rounds down to 0 mg. (20) 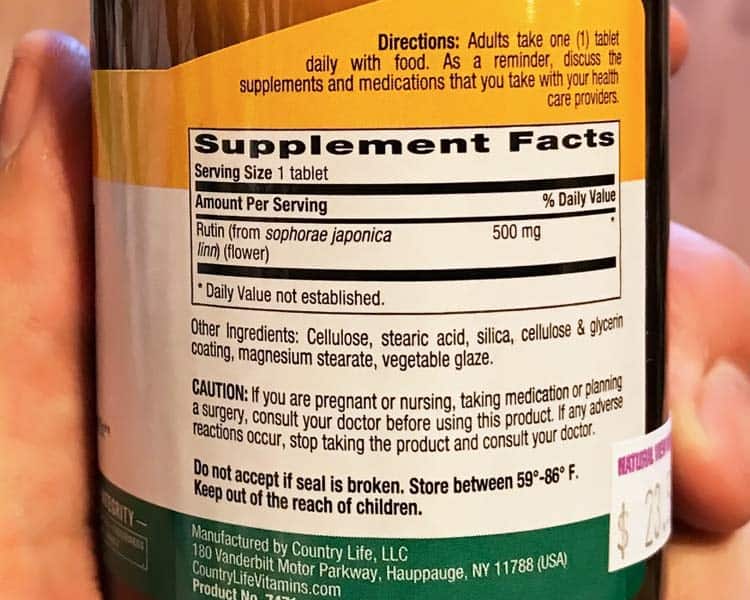 As a dietary supplement, most brands recommend 500 mg of rutin per day. It’s usually taken in tablet or capsule form. Most are made from flowers of the Japanese pagoda tree, which is exponentially more concentrated than any rutin food.

You can take rutin supplements with or without food. The molecule naturally has a low water solubility, though derivatives of it are better absorbed. Unfortunately, taking it with fat probably won’t increase its bioavailability. (21)

Solgar, Country Life, and Solaray sell 500 mg doses, while some brands use less, like NOW Foods and Swanson with 450 mg and 250 mg, respectively.

Not all, but most of the clinical trials to date involve synthetic or semi-synthetic forms of rutin. Therefore, it’s tough to gauge how the efficacy of natural whole food-based sources of rutin compare to the OTC drugs Venoruton, Relvène, and Paroven. Those use hydroxyethyl rutinosides, which is synthetically created.

Rutin supplements are also different than the similar citrus bioflavonoids known as hesperidin (hesperetin 7-rutinoside). Those too have research suggesting medicinal advantages, but you can’t say the two are interchangeable.

Ultimately, this means no one can say with certainty what the best form is to take.

Something that can be said is that the synthetic forms are not necessarily better.

Low concentrations in food sources are what spurred their creation. It wasn’t that they were necessarily thought to be better than pure natural rutin.

While you shouldn’t use it for any disease, as a dietary supplement there are a number of good options on Amazon. Solgar has 500 mg tablets and if you want pure powder, BulkSupplements makes that. Some people use the latter for cats, just giving them a tiny fraction of the recommended human dose. Though you should consult your vet before doing so.