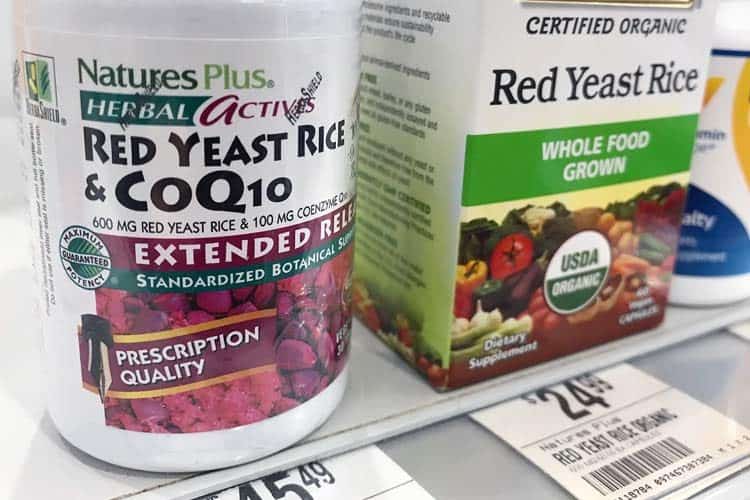 Review: Red Yeast Rice and CoQ10 May Not Be Best

The most popular dietary supplement for heart health is coenzyme Q10 and for good reason.

The scientific name for it is ubiquinone, because it’s ubiquitous throughout the body. Every cell in the human body contains it. Likewise for animals, from the smallest to the largest. Even the cells of plants and bacteria contain this coenzyme. (1)

What CoQ10 does for you is related to the production of energy on the cellular level.

Inside each cell, there are organelles (like mini-organs) known as mitochondria. They produce energy through a process called adenosine triphosphate (ATP). In short, it’s a series of chemical reactions and some require CoQ10 to take place.

CoQ10 is also a potent antioxidant, meaning it helps neutralize free radicals which can damage your cells.

The reason CoQ10 is associated with heart health is because that’s where the most is found. As you may expect, the organs which use the most energy naturally have the highest CoQ10 concentrations.

Your kidneys, liver, lungs, and brain have the most.

As we age, the amount found in these organs declines precipitously.

As a human, our natural production typically climaxes between the ages of 19-21. (2)

Is it just a coincidence that those were the days most of us were at our peak performance?

What is red rice yeast?

Red rice yeast is a Traditional Chinese Medicine (TCM) whose history dates back to Tang Dynasty, circa 800 AD. It’s made of regular rice, which has been incubated with a specific yeast strain (Monascus purpureus).

The culturing of the two ingredients takes place at room temperature over a period of several days. Because the M. purpureus mold is purplish-red, the rice becomes the same color during incubation. That’s why it’s called red yeast rice.

Other names for it include red fermented rice and red koji. The latter is the Japanese word for a bean or grain which has mold cultured on it. In Japan, it’s used to impart the reddish color on sake wine (akaisake).

The fermentation of it naturally produces monacolin K. This is the same active ingredient found in many cholesterol-lowering prescription medications, such as lovastatin. However, not all red yeast rice supplements contain monacolin K beyond trace amounts and even if they do, they’re not intended to diagnose, treat, cure, or prevent any disease. (3)

There is not good evidence that monacolin K or other ingredients in red rice yeast help high blood pressure (hypertension). (4)

You can read more about its history and benefits in Foods, Nutrients and Food Ingredients with Authorised EU Health Claims.

Monacolin K, which is naturally found in red yeast rice, is the same active ingredient in the statin drug lovastatin (Merck’s Mevacor). It works by inhibiting an enzyme that creates mevalonate, a required building block for cholesterol. That’s how it lowers LDL cholesterol.

The prescription drug lovastatin is typically prescribed in dosages ranging from 10 to 80 mg. (5)

In 1998, the FDA banned Cholestin, which was an over-the-counter red yeast rice supplement illegally being marketed as a drug for lowering cholesterol. The U.S. Court of Appeals sided with the FDA in a 2001 ruling on the matter.

During the nearly two decades since, the FDA has continued to crack down on supplements if they contain any more than a trace amount of monacolin K. While many manufacturers abide by this, the amount they contain can vary immensely.

In 2017, the European Journal of Preventive Cardiology published a study where they purchased 28 brands of red yeast rice supplements at major US chain stores such as Walmart, Walgreens, and GNC.

Each brand was then analyzed for its monacolin K content and here were the results: 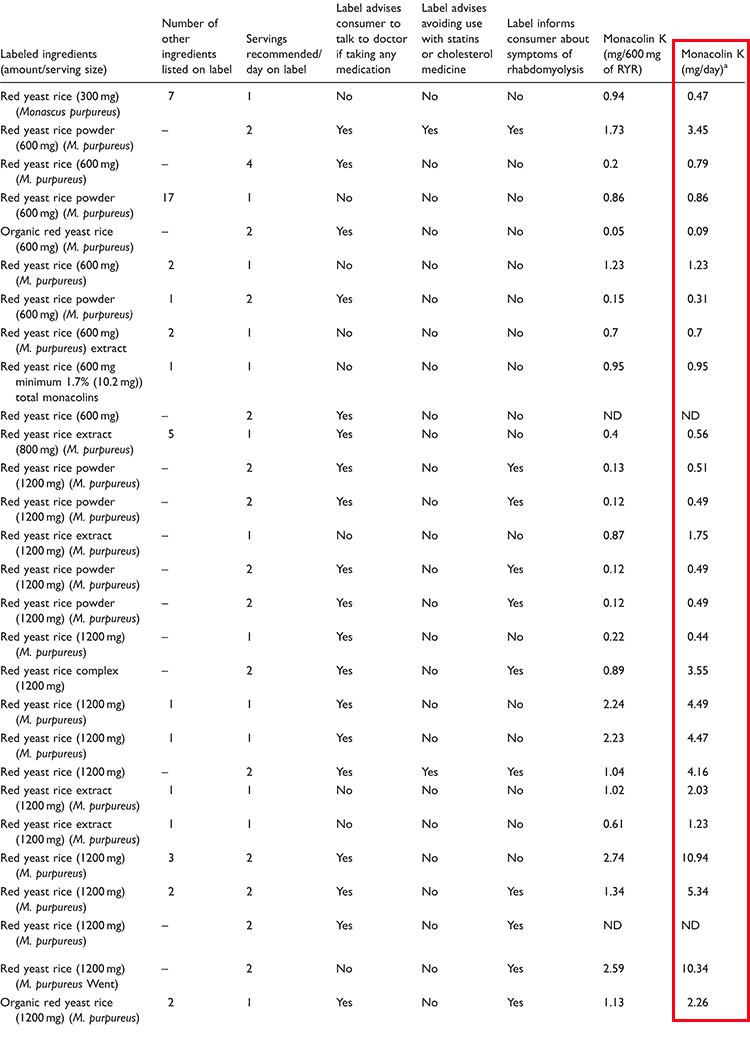 There was over a 60-fold difference between the supplement with the lowest and highest monacolin K content.

Based on the supplements’ daily recommended dosage of red yeast rice, the user would be taking anywhere from 0.09 to 10.94 mg of monacolin K daily.

On the high end of the range, it would overlap with the amount found in a low dose (10 mg) lovastatin pill.

Monacolin dosages of 10 mg and above have been proven to lower cholesterol in human clinical trials. Therefore, one would expect the same or similar results regardless of ingredient source. (6)

The FDA says only supplements which contain “trace amounts” are legal. The catch-22 is that it’s not exactly clear as to what constitutes a trace amount.

“While it is not clear exactly how much monacolin K is allowed to qualify as a ‘trace amount,’ it seems to be less than 1 mg per capsule…”

Even with such low amounts, red yeast rice extract might still have a cholesterol-lowering effect.

As published in a 2016 edition of the journal Nutrition Research, a randomized, double-blinded, and placebo-controlled trial found that a 3 mg dosage lowered LDL cholesterol. 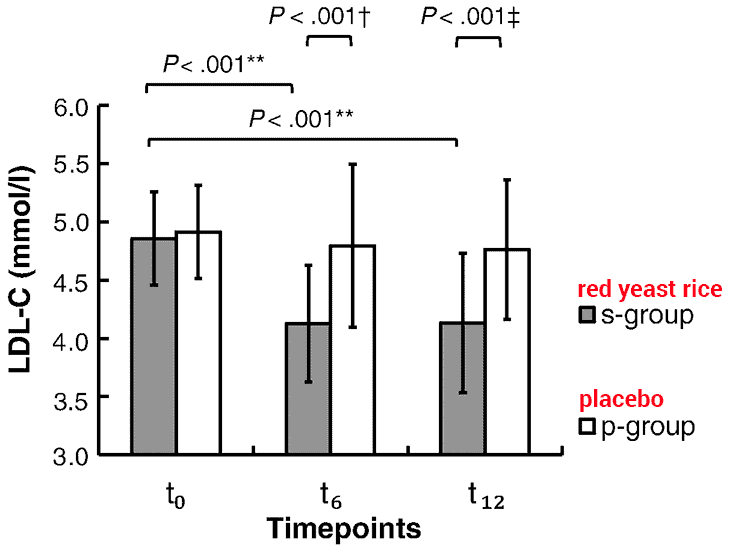 In the study, 70 people took the supplement and 72 were on placebo. You can see how after 6 and 8 weeks of this low dose, their LDL went down.

If a red rice yeast tablet contained 0.75 mg of monacolin K (which is lower than 1 mg) and the label’s instructions were to take it 3x daily, that would equate to a total of 3 mg per day, which is the same amount used in this study. (8)

Potential dangers of these supplements include:

In short, while people like to criticize the FDA for siding with big pharma, one can understand that there really are legit safety concerns regarding red rice yeast supplements, if they contain higher amounts of monacolin.

According to the NIH, possible side effects of red yeast rice supplements are the same as lovastatin, which includes:

These adverse reactions can be amplified if a person is on a medication which carries the same risk factors. Certain antibiotics, anti-fungal medications, HIV medications, and the antidepressant nefazodone are a few of the many which do. (3)

Because they’re both associated with cardiovascular health, some manufacturers combine both to make a single supplement. The main reason to take CoQ10 with red yeast rice, or a statin, is because monacolin K naturally depletes your CoQ10 production.

When it comes to statins, it’s not just the first-generation lovastatin (Mevacor) which suppresses CoQ10. Because many statins work through the same mechanism – by blocking certain enzymes involved with cholesterol biosynthesis – this side effect occurs with most.

Atorvastatin, better known as the brand name Lipitor, also causes a significant decrease after just 14 days of taking it. (10)

Setting aside the controversy about the rice supplement for a moment, the biggest takeaway is that any source of monacolin K, as well as most statins, can dramatically lower your body’s natural CoQ10 production. This is why many cardiologists advise their patients to supplement with CoQ10.

Which CoQ10 form is best?

Ubiquinone is the oxidized form of CoQ10. In order for your body to use it, it first must convert it to ubiquinol.

You can buy ubiquinol supplements but because the technology to make them is patented, they’re generally more expensive and fewer brands license this type.

The Japanese company Kaneka owns the intellectual property surrounding the manufacturing of ubiquinol. Rather than sell direct to consumers, Kaneka sells ubiquinol to supplement companies, who in turn, can use it in their products.

Supplements which combine CoQ10 with red fermented rice typically use the ubiquinone form, rather than ubiquinol.

Red yeast rice 1200 mg with CoQ10 30 mg is a dosage sold by Puritan’s Pride and The Vitamin Shoppe brand, among others. Many brands use a lower 600 mg dosage of the red yeast extract, such as Solaray and Nature’s Answer. NOW Foods adds a 3rd ingredient; omega 3 EPA and DHA (fish oil) in their Omega Red product.

The problem with all of these supplements is that they are using ubiquinone and a low dosage at that; 30-60 mg. While some contain 100 mg, that’s far lower than the 200-300 mg (or more) daily that often recommended for CoQ10.

Even though it may be a hassle, your best bet is to take your CoQ10 supplement separately, so you can take the preferred form (ubiquinol) and in an adequate amount. 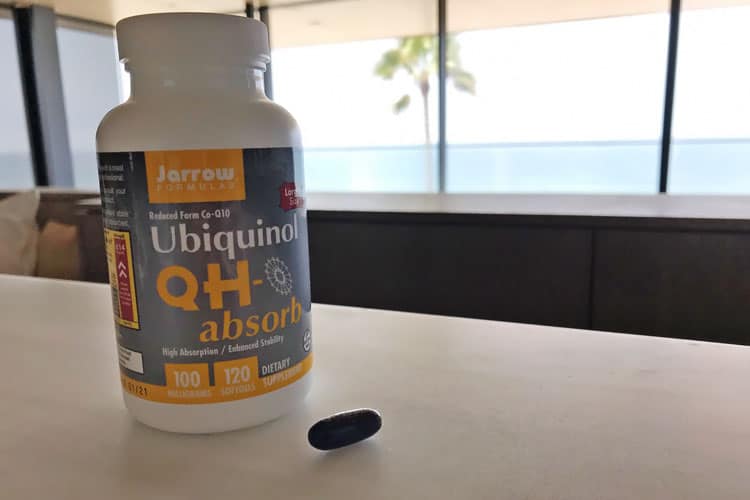 As a dietary supplement, we take Jarrow Formulas Ubiquinol QH-Absorb, which contains 100 mg of ubiquinol per softgel, 3x per day. You can buy it on Amazon, which is where we get it.

As far as taking red rice yeast with CoQ10, you should consult your doctor first. Given the large variances in monacolin K content, they may not be safe for everyone.

Please remember that red yeast rice and CoQ10 are dietary supplements only. They are not medications and are not intended to serve as a replacement for statin therapy or to lower cholesterol.