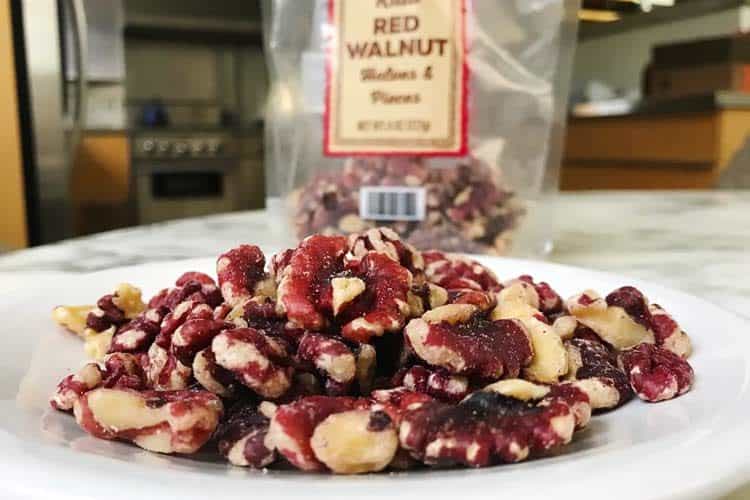 Red Walnuts For Sale Are Patented, Are They GMO?

Yes, you really can patent fruits, vegetables, and other plants. The legal requirements are a bit different than other inventions. As described in the provisions of 35 U.S.C. 161 (1):

“A plant patent is granted by the United States government to an inventor (or the inventor’s heirs or assigns) who has invented or discovered and asexually reproduced a distinct and new variety of plant, other than a tuber propagated plant or a plant found in an uncultivated state.”

Honeycrisp apples and Moon Drop grapes are two common examples of patented foods you eat. Both of those are non-GMO, while the Arctic apple is GMO.

A lesser-known patented plant is this bizarre colored nut, which has only recently made a foray into the supermarket aisles… 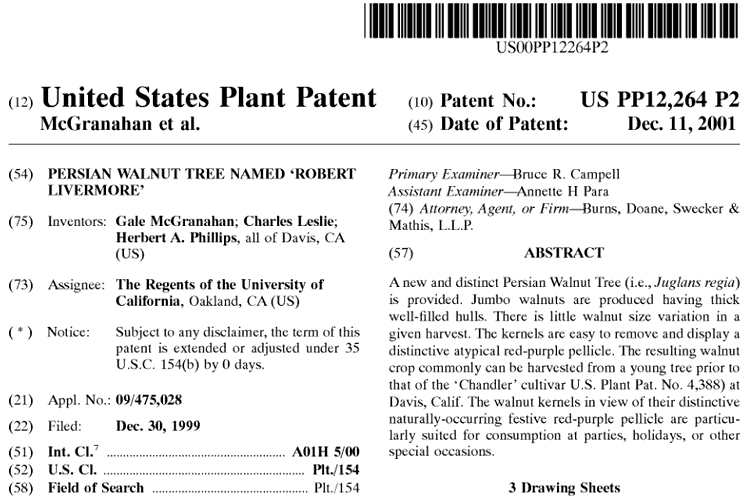 What is a red walnut?

Red walnuts were created by researchers at the University of California, Davis. They crossed a regular Persian walnut with a variety identified as RA1088, which has reddish-brown seed coat. The first cross was made in 1991 and in 1999, they filed for a patent. In 2001, this U.S. plant patent was granted as number 12,264. It is now the most widely sold red-skinned walnut in the world. (2)

UC Davis chose to name it Robert Livermore, in honor of a man who was a financial supporter of the university’s Walnut Improvement Program for many years.

Even though it’s an invented plant that looks peculiar, the red walnut is not genetically modified.

It was created by fertilizing a regular walnut with an unusual – yet naturally occurring – variety that has a reddish skin. That one was obtained from a seed bank in Bordeaux, France (Institut National de la Recherche Agronomique, Station de Recherches d’Arboriculture Fruitiere).

You may be surprised to learn that the regular variety, as well as the one from the seed bank, are both of the same species; Juglans regia.

You might not recognize that scientific name, but the common names you will; Persian or English walnuts. Both are the same thing.

The rare red-purple versions have been documented by botanists since at least the 18th century.

These variations of the regular walnut have been growing wild in Austria, Germany, Switzerland, and the Czech Republic. Called blood walnuts or “blutwalnuss” in German, they are purple walnuts with a dark and blotchy skin. They are edible but were never cultivated, because historically, the market has fancied light-skinned nuts with a uniform appearance.

UC Davis captured the best of both – the creamy flavor and consistency of the traditional English, with the color and pizazz of a wild blood variety.

In short, it was created by cross-pollinating the common walnut with one that had a natural genetic variation.

The end result is the Robert Livermore, with a reddish-purple coating. Here’s what these red walnuts in shell look like…

This pic isn’t Photoshopped, they really are that vivid. This picture is straight from the official journal of The American Society for Horticultural Science, found in Volume 39, Number 7.

The most common red walnut, the Robert Livermore, tastes like a regular English walnut but it’s bolder and less bitter. The lower tannin content leads to less astringency on the tongue. This allows for the creamy texture and natural nutty flavor to shine, without distraction.

Many describe them as having a sweet and buttery taste, in the vein of macadamia.

Some say they taste milder or mellow, but that’s because there’s less of the bitter tannins. The actual nut flavor will be stronger in the red.

People who try them generally conclude it’s their favorite type.

There are other colored varieties too:

While the Robert Livermore and Yolo taste great, the Zinger, Danube, and other wild variations from Europe have yet-to-be cultivated. That means they’re a bit ugly and tend to have a bitter flavor. You can’t buy them commercially in the US. You might see them sold by farmers and foragers in the United Kingdom and France, among other European nations. 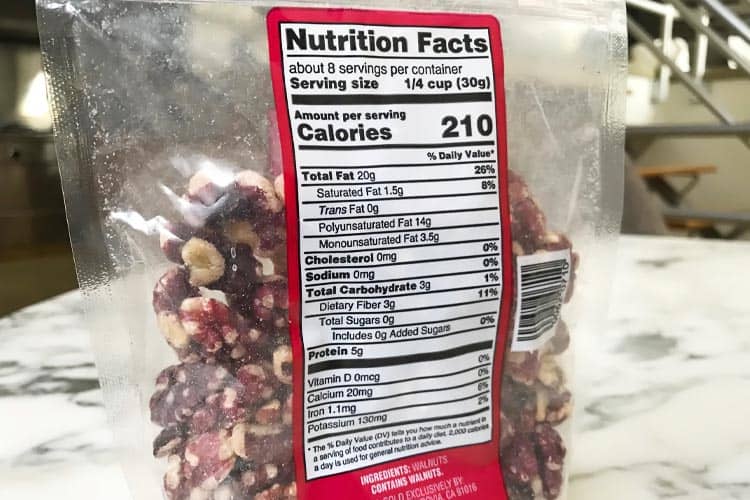 How many calories there are in red walnuts is 210 per ¼ cup (30 grams or about 1 ounce). That’s slightly more than regular English walnuts, which have 200 calories for the same weight.

The difference may just be a rounding in calculation by Trader Joe’s, because the amount of fat and carbs are identical between both types.

There are 20 grams of healthy fat, with most being in the form of polyunsaturated and monounsaturated. Only 7.5% of the fat is saturated. Since it’s a plant-based food, it’s cholesterol-free.

Vitamins and minerals include iron, magnesium, phosphorus, and B-6. The latter three are not on the above label but they’re in there, with roughly 10% of the daily value. (3)

What’s the healthiest nut to eat?

If you are a regular reader of Superfoodly, you already know we are torn between pistachio and walnut as being numero uno.

There several dozen criteria that go into that verdict, one of which is antioxidant content. With an ORAC value of 17,940 it’s actually pecans that have the most, but their drawback is lack of protein and they’re the second highest in calories, after macadamia.

With an ORAC of 13,541, regular walnuts are actually the 2nd highest in antioxidants. Best of all, you can eat them in a higher quantity since they have 67% more protein than pecans.

The ORAC for the red variety has not been tested, but evidence suggests it might be highest antioxidant nut.

This is because the pigmentation is from anthocyanidins. Those and the similar anthocyanins are responsible for producing the blues, purples, and reds in many superfoods, such as blueberries, acai, and raspberries. It’s what gives them much of their antioxidant activity. (4)

These classes of pigments come in thousands of different varieties but they’re similar on a molecular basis. The spectrum of color differences in mostly based on pH level.

Although their pigment type is different, black walnut benefits also suggest they’re richer in antioxidants than English, but based on the phenolic profile, we are willing to wager the red is still highest.

The red have not been clinically studied for health, but it’s probable they share many of the same perks of the regular variety:

Even though the Robert Livermore and Yolo were cultivated in the 90’s, they have only recently started showing up in grocery stores. This is because the trees take up to 8 years until they begin producing nuts.

Plus, since this cultivar is protected by a patent, not just anyone can grow them.

If you want to buy a red walnut tree for your backyard, you will have to wait until the patent expires in 2019 and even then, there’s no guarantee anyone will be selling these Persian red-skinned walnuts in a raw and sproutable form. At least not right away.

The USDA has a grading system for walnuts; extra light, light, light amber, and amber. The didn’t even include the Livermore until 2017. That’s how new they are to stores. (10) 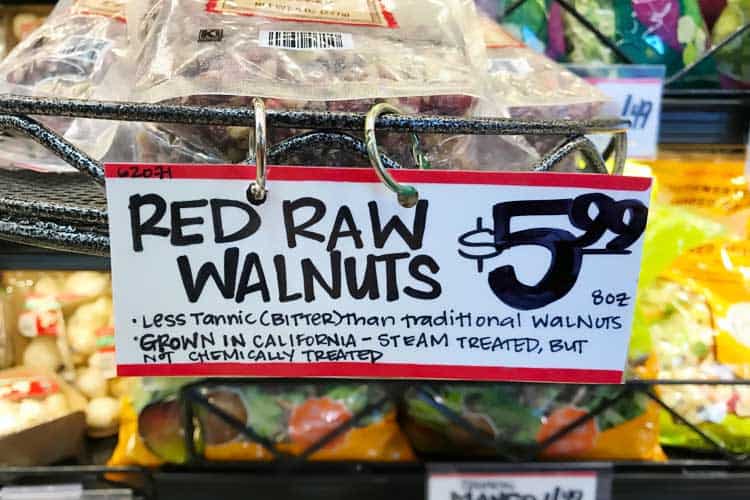 Whether it’s the mainstream grocers like Kroger (Ralphs here in California) or the high-end places like Whole Foods and similar, we have only came across red walnuts for sale at one place… Trader Joe’s. That was in 2018 and the cashier said they just put them out 3 days prior.

If you shop at TJ’s, then you know how it goes… what’s in-stock this week or month may be gone for the rest of the year. They aren’t a reliable place for buying hard-to-find foods.

The fact that TJ’s even got their hands on any – for their low price – is amazing. Demand for the reds far exceeds the annual crop size. There are fewer than 2,000 of these trees in the world. They’re all in California and not all are mature enough to bear nuts. There are only a handful of growers:

The brand Melissa’s sources from unnamed farms and sells them in clamshells at retail. The brand Food To Live seems to be the most popular, garnering excellent reviews for their raw red walnuts. You can buy a 1 pound bag on Amazon. Other sizes are on there, too.

Their uses in recipes are just as versatile as the regular. Best of all, they add flash to your culinary creations. That boring oatmeal looks a bit more intriguing with these bright kernels. Use in baking for the 4th of July and Christmas to add some festive color.

Originally known as the mission walnut, since the 1700’s it has been cultivated here in California by the Franciscan Fathers… and it just keeps getting better, with this latest crimson cultivar.