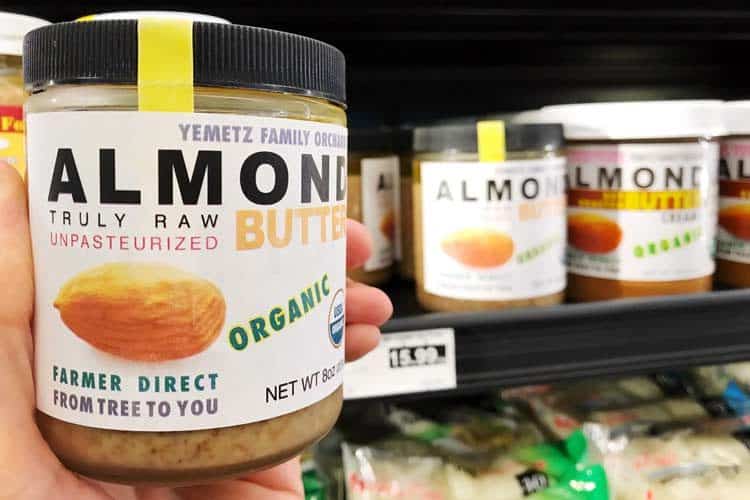 Did you know that at least in the US, selling this nut in its truly raw form has been illegal for over a decade?

At least on the retail level when a reseller (i.e. grocery store) is involved.

In short, the only legal way to purchase unpasteurized almond butter is through the following methods:

Unfortunately since the word “raw” has not been legally defined, almost every brand of this nut butter you see for sale is not really raw.

Most would agree such a high temperature does not qualify.

There is already plenty of bickering among raw foodies as to what temperature between 104 and 118 °F (40 to 48 °C) is the cut-off point for degrading and destroying enzymes in foods.

You hear none arguing for temperatures as high as 161°F!

Because of this loophole in the law, Trader Joe’s raw almond butter is legal marketing, even though it’s highly dubious. 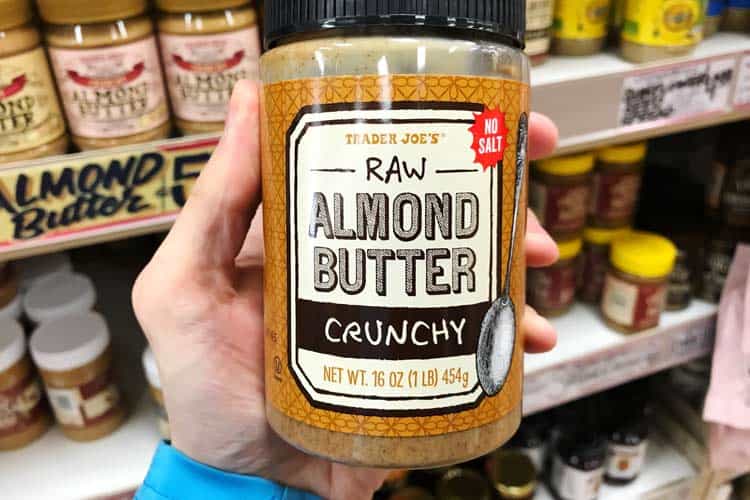 Obviously Trader Joe’s is no farmer and we’re sorry to report that $6.99 per jar is not enough to cover the costs of imported Spanish or Italian almonds. Not even at this discount grocer.

Yes it actually is good for you. There’s no added salt, sugar, or oil, which is often the case with most other brands. Even though the nuts are pasteurized, they’re not roasted like the almond butters from Justin’s, Once Again, Meridian, and some types from MaraNatha. Roasting creates high amounts of acrylamide, which is a known carcinogen.

As far as the basic nutrition facts for things like calories, fat, and protein content, those are the same as any pure form. 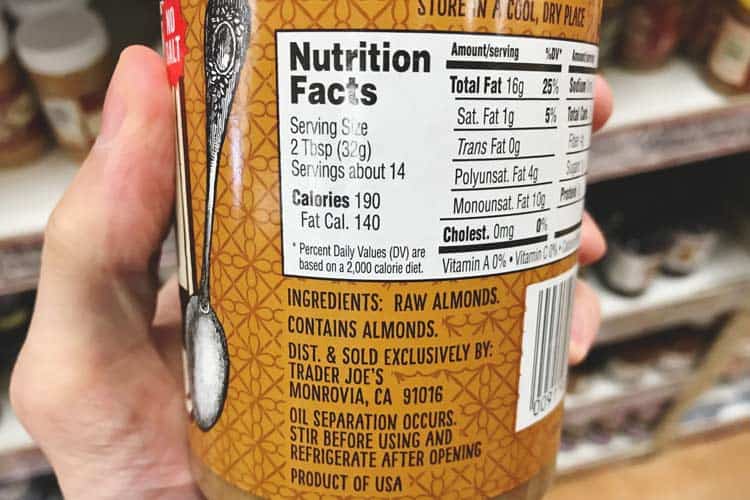 Whether raw, pasteurized, or roasted, how many calories there are will be 190 per serving of 2 tablespoons. With that comes around 7g of protein and 16g of healthy fats, that are mostly unsaturated. This holds true for any brand without added oils and sugars, including this one.

Even our reviews of the almond butter from Trader Joe’s are positive when it comes to taste and price. In fact if the intention is to heat it regardless – such as in a baking recipe for cookies or brownies – then we would recommend buying it, because there’s no point in paying for expensive raw if you’re just going to heat it up.

Aside from being pasteurized, perhaps the bigger drawback is that TJ’s doesn’t use organic nuts.

The only legal way for stores to sell the butter made with unpasteurized California almonds is to fumigate them with the “probable human carcinogen” known as propylene oxide. There may be no heat, but that’s the furthest thing from organic! (1)

This is a luxury you will only have if you live in California, since our state is where over 99% of the nation’s crop is grown. A few are grown in Texas so it’s possible, but not probable, to find them there.

Even in CA it can be a hassle to find.

We have seen nut farmers at the Hollywood Farmers Market, which is the largest in LA. The dozens of others throughout the city are rarely big enough to garner the attention of these farmer-direct sellers.

Where can you buy raw almond butter?

It’s not going to be at Trader Joe’s, Target, Walmart, or run-of-the-mill grocery store like Kroger. Typically the only stores you see selling butters made with raw European nuts are places like Whole Foods, Sprouts, and similar stores. Even at those places, not all locations will carry it.

Here in Los Angeles we have a difficult time finding it. The very high-end market in town, Erewhon, does sell the European version and they charge an arm and a leg for it. One of the largest Whole Foods in the city, at El Segundo, has a limited variety to choose from. 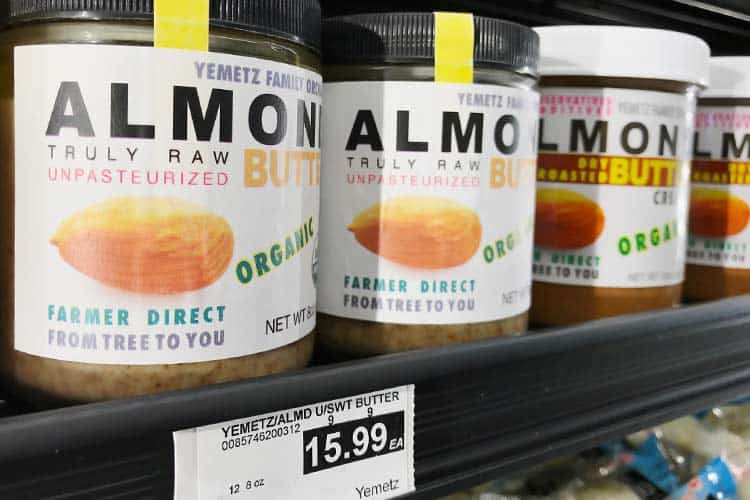 This is the first time we have ever seen an intermediary – like a grocery store – offer a product made using CA grown.

Since this store is reselling this Livingston, CA based Yemetz Family Farms product, unfortunately this might violate the law.

Made in Europe imports are the only legal way to sell raw butter through an intermediary.

While you can find the European-imported versions at some brick and mortar stores, it can be like searching for a needle in a haystack. Obviously, online will be the most straightforward route to finding them.

The brand Gopal’s is unique in that they legally circumvent the law by using Texas-grown almonds. You see, the pasteurization law only applies to those grown in California. So it is 100% legal to sell American-grown, as long as they come from elsewhere in the country.

Aside from being truly unpasteurized, the other reason we like this brand is because they use sprouted nuts. You can get a jar of Gopal’s on Amazon.