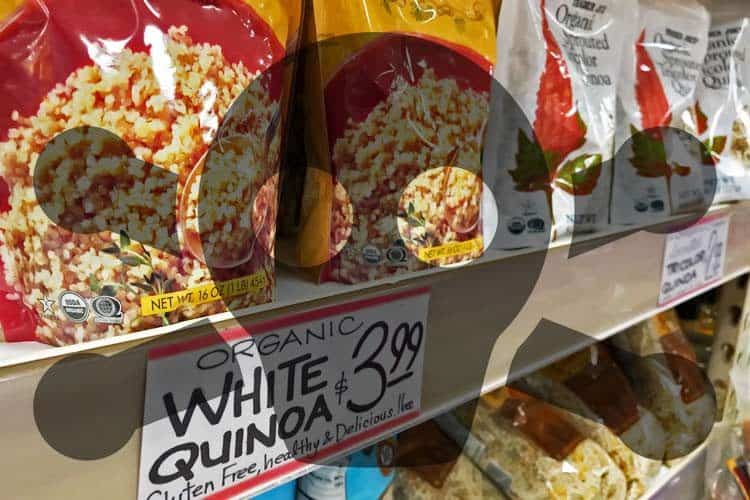 Why You Have Side Effects With Quinoa From Trader Joe’s

This South American superfood is supposed to be the ideal gluten free grain alternative. Being a flowering plant in the amaranth family, it’s totally unrelated to wheat, barley, and rye.

Compared to white and brown rice, it has less carbs and more protein. 57% more protein to be exact, when comparing on a per calorie basis.

Despite its nutritional benefits, many people report horrific reactions from eating it. In fact, some who have milder Celiac cases even claim effects as bad as gluten, albeit through different manifestations.

Summary: Most brands of quinoa, including Trader Joe’s, are unwashed. This means they are coated in saponins, which causes digestive symptoms for many, if not most people. For an affordable pre-washed brand, here is our favorite on Amazon. 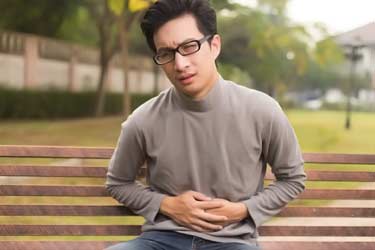 Can you have a quinoa allergy? Yes, although it is extremely rare. Among the nearly 30 million pieces of medical literature in the PubMed database, only two accounts of anaphylactic reactions exist. Outside of those, there are no case studies documenting milder allergic attacks, such as hives or rash. (1) (2)

Each cooked cup has 5.2 grams of fiber, which equals 21% of the daily value. Normally this is good for you but for those who don’t normally eat much, this can trigger gastrointestinal issues which run the gamut.

Depending on how your body responds to high fiber, it may be as simple as a stomach ache to symptoms of gas, bloating, diarrhea, or even constipation due to a temporary blockage.

However for the vast majority of people, the side effects experienced are not due to an allergic reaction or the fiber content. They’re caused by a hidden danger called saponins.

When you cook quinoa, do you ever notice how the water gets “soapy” looking with lots of foam? Much of that comes from these compounds.

Saponins can be thought of as a natural pesticide. They are chemicals created by plants to thwart predators from eating them, such as birds, insects, and fungi. Many types of saponins provide health benefits, while others taste bitter and cause digestive upset to deter others from eating the plant.

They are not the same thing as lectins, though they can produce similar reactions. And yes, quinoa does have lectins because all organisms have them, including animals. It’s not just nightshades as some falsely purport.

Are saponins in quinoa bad for you?

It is impossible to make blanket statements that saponins are bad or good for you, since the answer varies by plant species and who’s eating them (e.g. human or insect).

In humans, many offer benefits. Those found in spinach and oats boost calcium absorption and help with digestion. On the other hand, those found in other plants are poisonous to humans. (3) 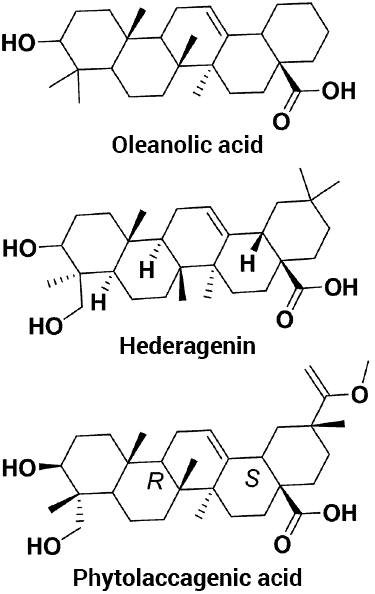 The 3 most prevalent types in quinoa are oleanolic acid, hederagenin, and phytolaccagenic acid.

There are large amount of saponins in quinoa seeds (yes, they are seeds). To date, 16 different types have been detected and in total, their amounts can range from 6.27 to 692.49 mg per kg of the seeds. Compare that to its cousin the amaranth seed, which tests as having 0.9 to 4.91 mg per kg. That’s up to 140x more saponins!

For those suffering from Candida albicans, the good news is that preliminary research has found quinoa saponins to have “substantial antifungal activity” against this yeast in the lab (no human studies have been done). (4)

One type of saponin in this particular food has shown anti-inflammatory benefits; 3-O-ß-D-Glucopyranosyl oleanolic acid.

The bad news is that they can act as an anti-nutrient by decreasing absorption of some minerals, like zinc and iron, by forming insoluble “soapy” complexes with them. However that effect is believed to be “not a concern for human health” since the impact is so trivial. (5)

The primary reason quinoa is bad for you is because many people are sensitive to the saponins and experience gastrointestinal discomfort from eating them. The amounts are not enough to be dangerously toxic or poisonous, though stomach pain is a common side effect that can result from eating quinoa.

How to get rid of saponins in quinoa 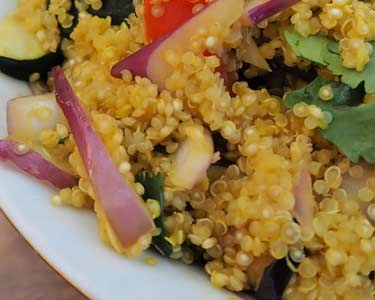 Even if you are really sensitive, you don’t have to stop eating this superfood.

The key to safely and enjoyably eating it is proper preparation.

The saponins coat the outer shell of the seed. Thoroughly rinsing the quinoa prior to cooking will get rid of the vast majority of the saponins. Even without washing, the standard preparation of boiling the seeds for 15 to 20 minutes will destroy some but not all.

How important is it to rinse quinoa? That depends on the individual. Some people have stomachs of iron and can withstand them, while others experience extreme pain and aching from just consuming a little that hasn’t been rinsed.

Eating crackers or protein bars containing sprouted quinoa or making “oatmeal” using quinoa flakes can both be problematic if the seeds weren’t washed beforehand. Be wary of any raw quinoa protein powders or other culinary creations, because many are made with cheaper commodity-grade quinoa that has not been rinsed.

Speaking of cheaper grade, that brings us to Trader Joe’s…

The problem with Trader Joe’s quinoa

Whether you’re buying their white quinoa, tri-color quinoa, or their sprouted variety, all three of these come with a warning like “always rinse” before consuming. 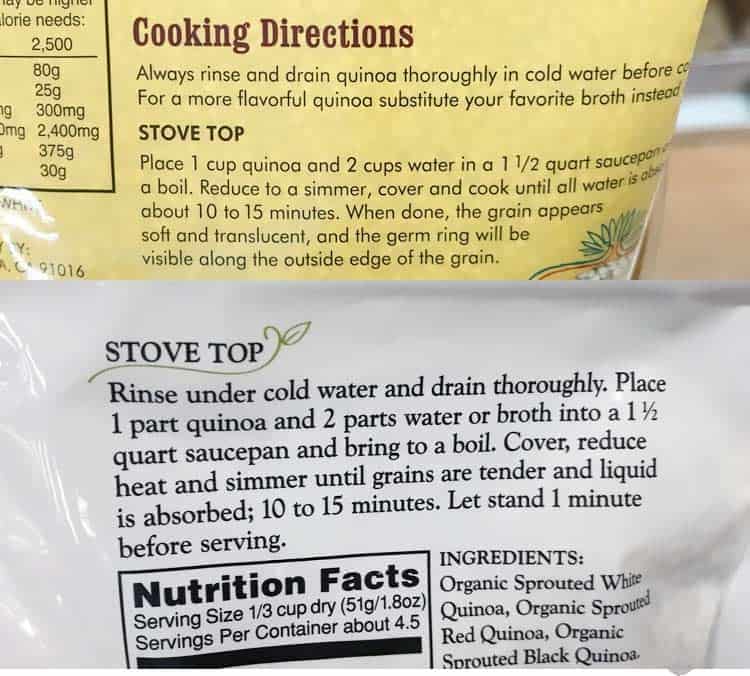 Are Trader Joe’s quinoa rinsed ahead of time? Based on these cooking instructions, they don’t sound to be. Brands that have been pre-rinsed will prominently advertise it on the package since it is a selling point.

As far as Trader Joe’s frozen quinoa, that is pre-cooked and one would assume it has been pre-rinsed, however the package remains silent on that. Even setting that issue aside, our review of their frozen is not favorable. The texture is dense and nothing like the fluffy fresh boiled or other frozen forms we have had.

Plus, the price of their frozen is a big ripoff considering you only get two 8 ounce packets for $3.99. In total that’s 1 pound cooked which really only equates to a few ounces of the dry seed.

Oh and because some people have asked, rinsing after cooking might help, though it’s not as good as rinsing beforehand. Think about it… if you cooked it unrinsed, then the seeds would have absorbed the saponin-rich water they were simmered in.

Which quinoa brand is best?

Most brands on the market are not pre-rinsed. You will need to rinse them thoroughly in a fine mesh strainer.

This process can be messy. Since the seeds are so small, often times they overflow into your sink and onto your counter if using too small of a strainer. If you have awful tap water, that’s another factor to consider. That water is now soaked into your food during the rinse.

If using the brands Trader Joe’s, Costco (Kirkland Signature), Walmart (Great Value), Whole Foods (365 Everyday), Regal Foods, Betterbody Foods, or Alter Eco, make sure you thoroughly rinse before cooking. We checked the labels for the available varieties of each; white, tri-color, red, organic and non-organic. Every package we inspected said to rinse before use.

Now to be clear, that doesn’t mean those brands definitely do not rinse. However the warning suggests they do not or at the very least, they weren’t rinsed thoroughly enough to make them ready to eat without washing. 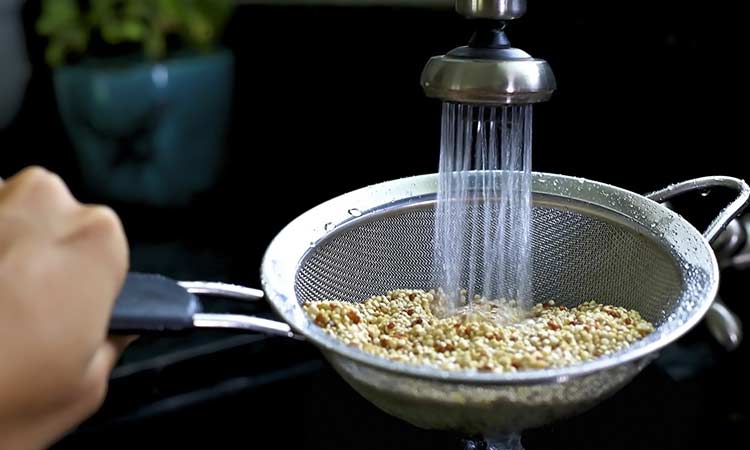 Rinsing quinoa without a strainer is near impossible! If you need one, we recommend this 3 size set on Amazon. The mesh is fine enough to work with it and grains like rice.

The best quinoa brands are those which come pre-rinsed and very few manufacturers do this. All of Bob’s Red Mill, Ancient Harvest, and some of Tru Roots Organic come pre-washed. These brands may not be the cheapest, but they are the safest to eat out of the box and offer superior taste, since the bitter saponins are removed.

For those with Celiac, gluten sensitivities, or GI disorders like IBS and Crohn’s disease, then paying up for the pre-rinsed is a no-brainer. These are manufacturers who make millions selling their products, so you can bet they have perfected the rinsing process. It’s unknown if at-home rinse jobs can compete with their scientifically perfected power washing and soaking processes.

Based on ORAC values, the tricolor and red quinoa will have higher antioxidant content. Red is 22% higher than white (3,900 and 3,200, respectively). Black quinoa is highest at 4,800 but no brands sells that already rinsed.

Our favorite is the 4-pack of red organic from Bob’s on Amazon. For recipes where you want a more muted flavor, then go with a 4-pack of the white.

For baking, we use Bob’s whole grain quinoa flour.

For breakfast as an oatmeal replacement, we buy Ancient Harvest quinoa flakes.