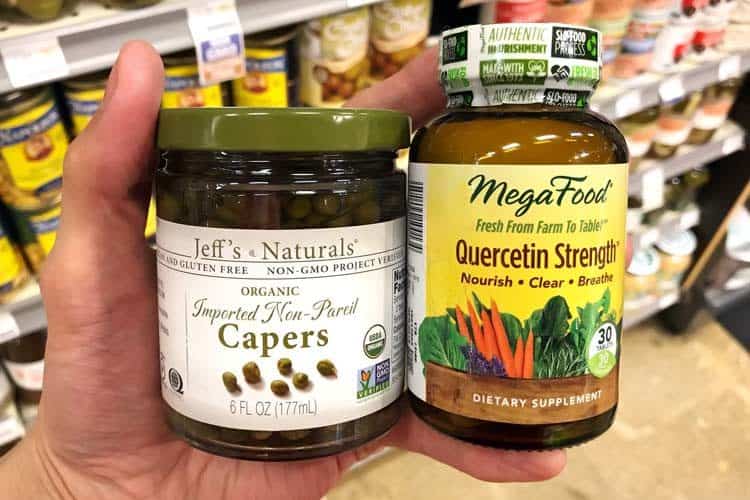 Resveratrol is what’s known as a sirtuin-activating compounds (STAC). These influence sirtuins. In plain English, they slows down cell aging.

A lesser discussed STAC is quercetin.

We will cut right to the chase and tell you the highest source… it’s capers. Number one is for fresh capers and even when jarred, they still take the silver medal.

These are flower buds from the Mediterranean. You can’t buy them fresh in the United States, UK, etc. Your only option are the jars/cans and those are all sodium bombs. For this plant polyphenol, consuming the amount of capers listed below would also come with 2,000 to 3,000 mg of sodium (for 100 grams of capers).

That alone is far more than the 1,500 mg per day of sodium recommended by the American Heart Association. (1)

Quercetin rich herbs like dill, cilantro, and Mexican oregano pose another problem. Sure they’re concentrated, but you may be consuming 1 or 2 grams per serving, not 100 grams.

This is why the richest natural sources aren’t necessarily the best. Even more important is how feasible they are to consume in high amounts.

Named after the Quercus (oak) tree in which it was first discovered, quercetin is a type of flavonoid prevalent throughout the plant kingdom. Aside from having potent antioxidant activity, it is being researched for potential health benefits including anti-inflammation, anti-allergy, asthma relief, longevity through the mimicking of calorie restriction, cholesterol lowering, and cancer research. (2) (3) (4) (5) (6) (7) 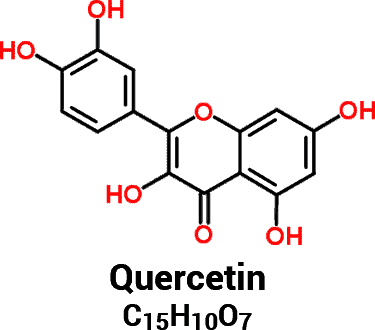 While it may have some vasodilator and antiplatelet effects, one of the things it’s touted most for – blood pressure – has some of the flimsiest evidence among the researched topics. (8)

Does quercetin lower blood pressure? A 4.4 point drop in diastolic (the bottom number) was seen in a double-blind and placebo-controlled study with 18 participants at the University of Utah. It’s irrelavent though since they used a mix of various plants including green tea, grape seed extract, resveratrol, ginkgo biloba, and bilberry. Even though many people allege a blood pressure advantage, there just is not clinical evidence yet to back that up in humans. (9)

Quercetin and resveratrol weight loss claims are rampant in the supplement world. These too have insufficient evidence in humans.

In vitro (lab research) has been found that quercetin alters the pathway of energy metabolism by affecting certain fecal bacterial species. And yes, it has been found to help suppress some side effects of obesity in mice. Its apparent activation of AMPK is another pathway that might help with losing weight. Though all of these remain theoretical at this point in time. (10) (11) (12) (13) (14)

What is quercetin good for?

The positive effects of this plant polyphenol are only adequately documented in laboratory settings. In human research there are several promising studies, but not enough clinical data to validate any medical uses. However since it appears beneficial without side effects, it remains a good phytonutrient to pursue in your diet even though it’s unproven.

Dr. Stephan Bischoff, who is the Director of Nutritional Medicine & Prevention at the University of Hohenheim in Stuttgart, sums up nicely what scientists currently believe about this phenolic compound (15):

“Quercetin is a most promising compound for disease prevention and therapy; however, many of the effects still need confirmation by human intervention trials.”

What are the best sources?

Where does quercetin come from? There’s no defined pattern in the plant kingdom. When isolated as a dehydrated powder, its color is yellow. However that doesn’t mean yellow foods are a good source. Bananas have literally none, while yellow banana peppers are among the top 10 sources. Many of the best are not yellow at all, such as blue fruits and green leafy vegetables and herbs.

Just when you think you find a pattern, mother nature shows you otherwise.

Even though many hot peppers are a rich source, spicy foods don’t always contain quercetin. One of the most popular peppers – habanero – has almost none at only 0.3 mg per 100 grams.

Even when you’re looking at a specific species, it’s not necessarily in every part of the plant. Radish leaves are a great source of quercetin, yet the radish root itself – the part we typically eat – has literally zero.

This is why it’s important to actually know the foods and drinks that have it. Bookmark this page for future reference because remembering them all can be tough, given the lack of patterns and many anomolies. 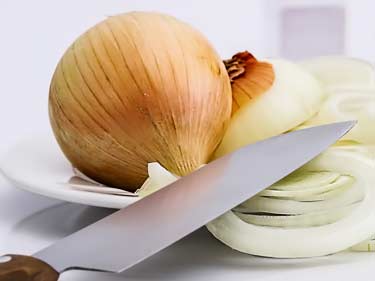 Clinical studies in men and women using lower dosages, such as 50 to 400 mg per day, seem to show few, if any benefits. 500 mg daily appears to be the minimum threshold needed before positive effects were seen. (22) (23) (24)

Of course that’s not to say that low amounts are useless. It’s just that they don’t seem to be enough to move the needle in the clinical studies done.

White or yellow onions have 11.0 to 41.9 per 3.5 ounces (100g) according to the above food chart. That variation is due to the seasons. The summer harvest have low content, while the winter is almost quadruple. That was from an extensive piece of research done in Japan, though the US, Cananda, and Europe would be expected to follow a similar trend, as we are all in the northern hemisphere.

Even when quercetin levels are at their peak, getting 500 mg would require eating nearly 3 lbs of cooked onions! For raw onions, it would take an even great weight, since the cooking decreases water weight and therefore intensifies the concentration.

That brings up the next point about heat from cooking. The good news is that it tends to stand up quite well during boiling and other forms of cooking with non-concentrated heat (e.g. not grilling).

Overdoses in humans have not been documented in case literature, but that’s not to say too much quercetin is impossible. Until more clinical work is done, no one can conclusively say how much is safe vs. not.

The average terminal half-life of quercetin, which is the time it takes for a compound to lose half of its pharmacological or physiological effect, has been reported as 3.5 hours. The elimination half-life, which is the time it takes for half to be excreted or broken down, has been measured as 11 to 28 hours. Both of these are relatively long, which is an advantage over compounds like resveratrol which have a half-life in minutes rather than hours. (25) (26)

Another advantage over resveratrol and many other anti-aging/antioxidant compounds is that the bioavailability of quercetin can be challenging, yet still feasible. The biggest factor is the conjugated glycosides which may be attached.

For example, apples have it in the form of quercetin galactoside and quercetin rhamnoside. These are larger molecules which have been found to have less uptake through the intestinal wall and hence, a lower absorption rate.

Onions on the other hand are mostly providing quercetin glucosides, which are the best form of quercetin from food. It still has minimal proven absorption, with percentages ranging from the single digits to mid-teens. (27)

Aside from offering expentionally higher amounts, the biggest case to be made for using quercetin supplements is their bioavailability. The best brands use a form called quercetin dihydrate which appears to have excellent bioavailability. Sadly it’s not found in common or even uncommon food sources. Supplements often derive it from the Japanese pagoda tree (Sophora japonica).

Although it’s not in the dihydrate form, Source Naturals Activated Quercetin is a trademarked name for what they say is a hypoallergenic formula containing added ingedients, like the enzyme bromelain, to boost absorption.

It’s available in quantities of 50, 100, and 200 tablets, offering 300 mg of quercetin per 3 tablet dose. While it is true that bromelain may help, without published literature on their Activated Quercetin supplement, it’s impossible for us to draw a verdict on Source Naturals’ formula one way or another. (28) 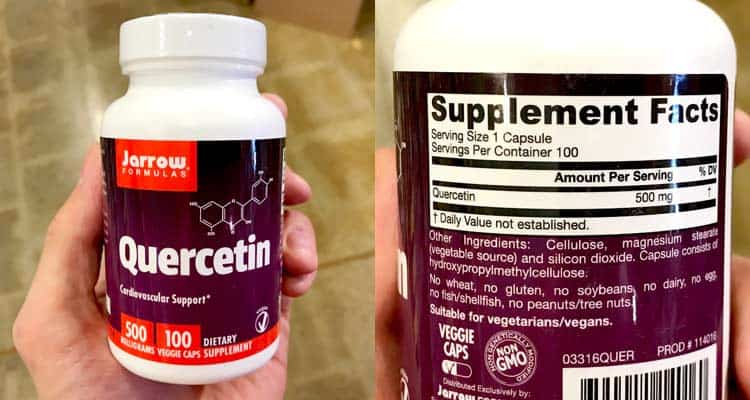 We like the brand Jarrow Formulas too, yet for this particular product, they use a non-dihydrate form. Likewise for NOW Foods quercetin with bromelain.

Unless a lable specifically says dihydrate, it’s likely not the type being used.

Take quercetin with or without food? Regardless of the type and whether it is in the form of a supplment or a whole food, all sources have low solubility in water. It’s really more of a fat soluble substance that should ideally be taken with meals or a snack containing some fat. A few nuts or seeds should do the trick.

Our favorite supplements are the ones that use quercetin dihydrate. You can find the following for sale on Amazon: