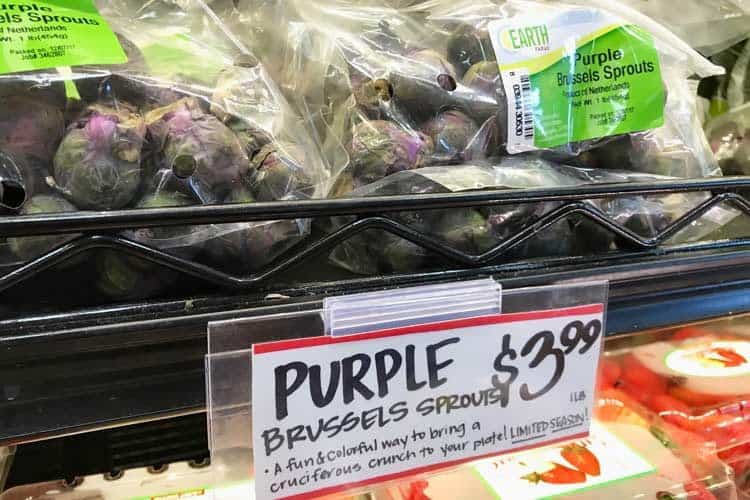 The green are not to everyone’s liking, but they probably should be.

Even if you don’t fancy the flavor, cruciferous vegetables contain glucosinolates.

These are unique compounds you won’t find in other plants. They have demonstrated anti-cancer potential in research.

To be clear, this effect has not been tested in human clinical trials. Therefore, it remains theoretical and unproven. Foods and supplements containing glucosinolates should not be used for the treatment, cure, or prevention or any disease.

That said, what the lab research suggests about glucosinolates is exciting.

The above chart comes from one such study out of Cornell University. They used cultured human lung cancer cells and exposed them to various vegetable extracts. The best antiproliferative effect was seen with Brussels sprouts. (1)

It handedly beat the other cruciferous types including broccoli, cauliflower, and kale.

What are purple Brussels sprouts? 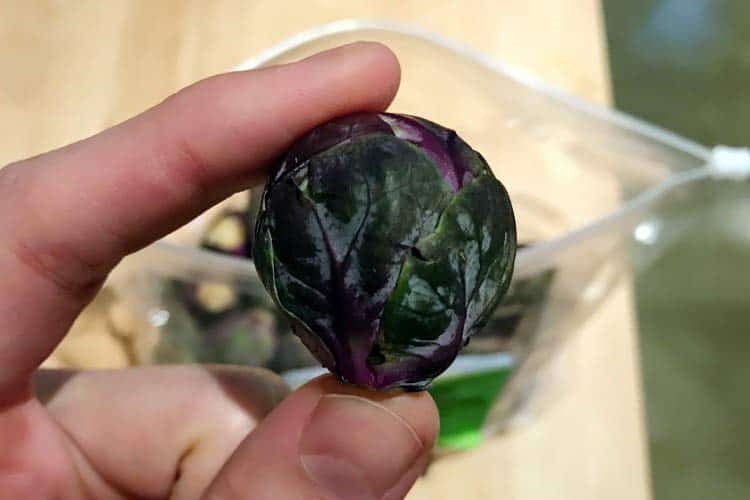 Purple Brussels sprouts are a non-GMO cultivar that was created by crossing the regular green variety with red cabbage.

That’s possible to do naturally because both plants are types of cabbage (Brassica oleracea species).

Possible, but certainly not easy. It took a talented botanist to pull it off in the 1940’s. The “inventor” was C.N. Vreeken. As with regular green Brussels sprouts, he too was from the Netherlands.

The difference between purple vs. green Brussel sprouts is more than just color. The purple taste sweeter, with a more nutty flavor. They grow in a less uniform manner, with their leaves are less tightly packed.  No doubt, a trait they picked up from the cabbage they were crossed with.

Because they have a sweeter flavor, their plants attract more insects like caterpillars. That fact, along with their inconsistently shaped stalks and sprouts, means they’re harder to grow and harvest. This is why so few farmers are up for the challenge, even though they taste better.

If you’re up for it, you can buy the seeds on Amazon and plant some in your garden.

Because they are still a niche vegetable, nutrition facts for purple Brussels sprouts are not available. The USDA and brands which sell them, like Frieda’s, have yet to analyze and publish the nutritional data.

The purple are likely comparable to the green for most values. One cup boiled and drained has:

There are also smaller, yet respectable, percentages for numerous B vitamins and other essential minerals, like iron and magnesium.

Brussels sprouts have as much protein as a beef steak.

According to the USDA National Nutrient Database, every 100 calories of steak provides between 7 and 8 grams of protein. The same holds true for these little green guys. (2) (3)

When it comes to health benefits, no human studies or lab research has been published specifically for the purple. However, there are comparative studies on closely-related green vs. purple broccoli, cabbage, cauliflower, and kale. Their conclusion is clear; purple is healthier than green.

In addition to vitamin C, significant antioxidant activity comes from their anthocyanins. Those are the same class of pigments responsible for making blueberries blue and acai the color of sangria. (5) (6)

At least when it comes to white vs. purple cabbage, Chinese scientists report that a single dominant gene – which they named BoPr – is responsible for producing the magenta color. Most likely, sprouts are controlled by the same. (7)

Using cultured human colon cancer cells, another Spanish institution – The University of Barcelona – tested them with extracts from various colors of cabbage. Purple showed the most antiproliferative activity, even beating out the darker black cabbage. (8)

While they didn’t test the violet variety, they had this to say about the green:

To reiterate, that’s lab research. It’s unknown if this happens in humans.

How to cook them

You can make Brussels sprouts taste good and crispy by grilling, roasting in the oven, and frying in butter or olive oil. Using a glaze of balsamic vinegar, honey, or the ever popular maple syrup all work too. For extra crunch and flavor, add bacon or even batter them.

For health, use none of the above.

Roasting with brown butter and lemon might taste great, but you will be losing out on phytonutrients.

Glucosinolates and isothiocyanates are destroyed by high heat. So is vitamin C.

With the exception of a few shaved pieces in a salad, eating raw Brussels is not palatable to most people.

However, that doesn’t mean you have to let the pendulum swing too far in the other direction, by using high-heat methods like roasting, frying, baking, and grilling.

All of those ways of cooking can create temperatures of up to several hundred degrees. Especially the roasting and grilling.

Plus, those charred and burnt leaves will contain acrylamide and other potential carcinogens.

To minimize the reduction in glucosinolates and isothiocyanates, boil or steam for a short amount of time. This will also better preserve the vitamin C.

At the temperature of boiling water, here’s how long the glucosinolates hold up in rapeseed. That’s also a member of the Brassicaceae family. (9)

Even if you boiled it for 15 minutes, you still have 76% of the glucosinolates remaining.

Setting that issue aside, don’t kid yourself about the maple-roasted Brussels sprouts with bacon and toasted hazelnuts. That’s more like a dessert, not a wholesome serving of veggies!

A healthy and simple recipe

In the US, Canada, UK, and elsewhere in the northern hemisphere, the purple/Red Rubine are in-season from the fall and into early spring. Typically September through March.

Unless you spot some at a farmer’s market, you’re unlikely to find organic purple Brussels sprouts for sale. Frieda’s and other major suppliers only sell conventionally grown – and they bring them in from the Netherlands! The good news is that pesticide usage there is much stricter versus America.

Who sells them? For this recipe, we got them at a Trader Joe’s in Manhattan Beach, California. Some Whole Foods locations carry them. If your grocer carries Frieda’s brand of produce, ask them if they can order some for you. 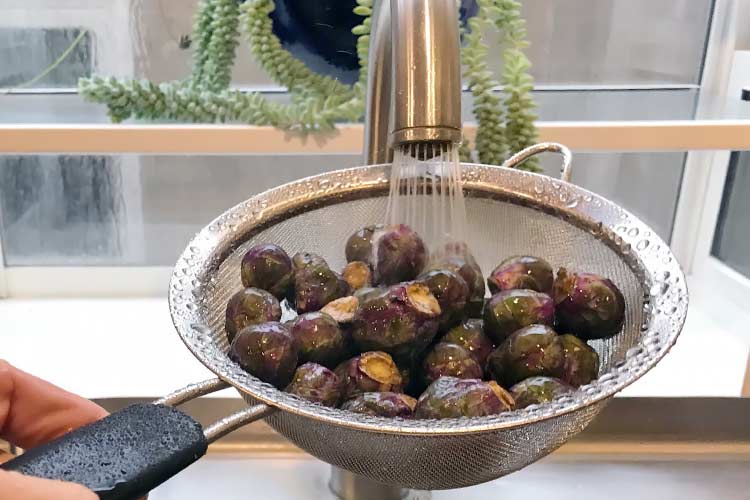 Here in SoCal, the rain outside is a more unusual sight than these sprouts.

Since they’re non-organic, make sure you rinse them well.

The reason we recommend boiling over steaming is because they are conventional.

Normally you wouldn’t want to lose the juices and hence, minimal amounts of water are preferred.

However when they’re conventional, it’s a good idea to have excess water leftover… as that will contain pesticide residue which you pour down the drain, rather than put in your mouth. 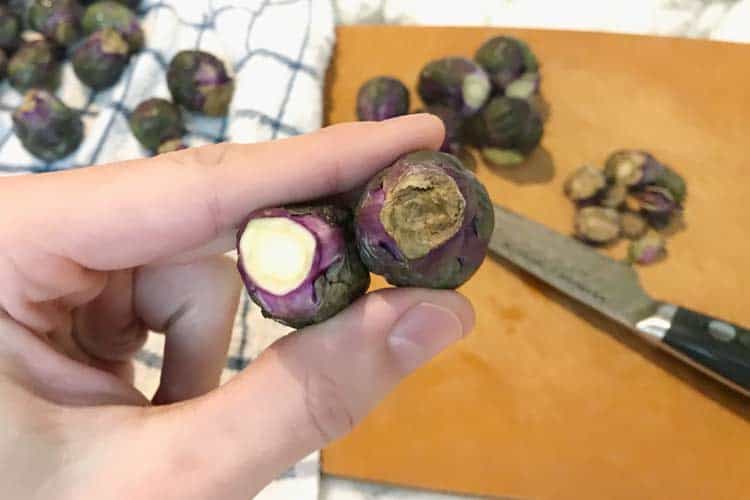 Depending on their age, you may need to slice off the browned bottoms. Yes, we grabbed the bag from the very back. Still, their bottoms weren’t exactly appetizing. 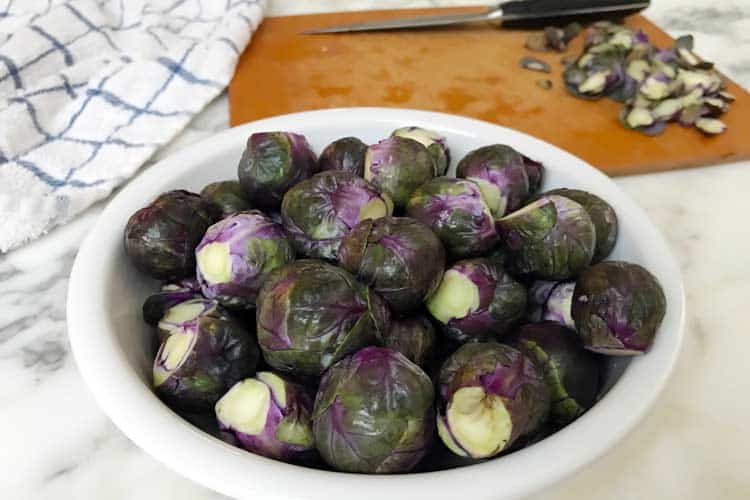 After you have them prepared, you will be add them to some gently boiling water. 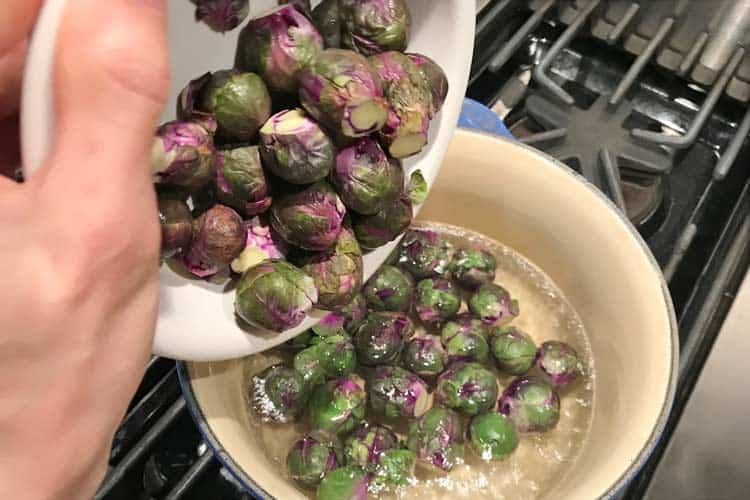 The purple have a shorter cooking time versus green Brussels. The leaves of the head are not as tightly packed. If you overcook them, they will fall apart. 7 to 10 minutes will suffice. 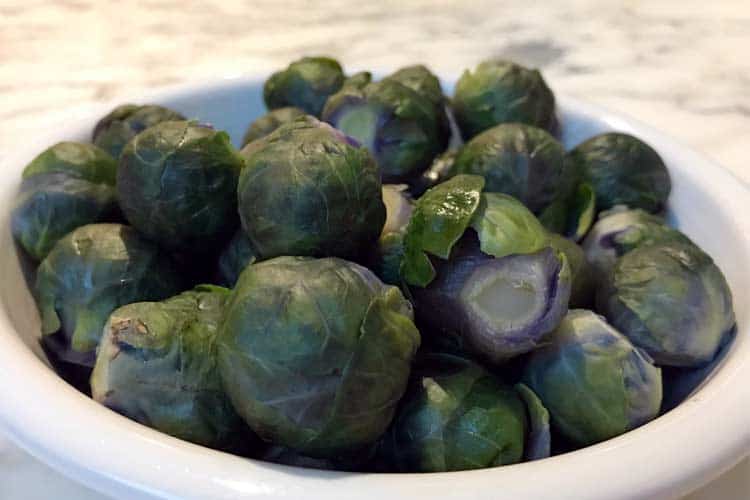 This is what they look like after cooking. As with colored cabbage, the purplish pigments will fade, but they’re still darker than the green. 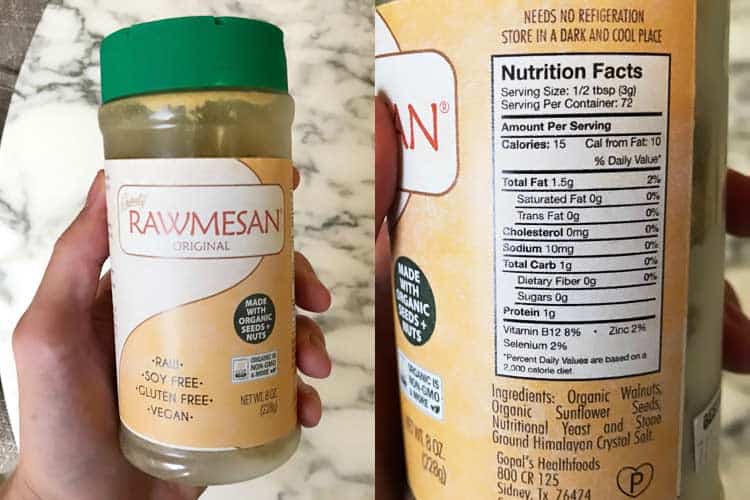 The last step is to jazz up their flavor with our favorite guilt-free vegan Parmesan-flavored cheese. 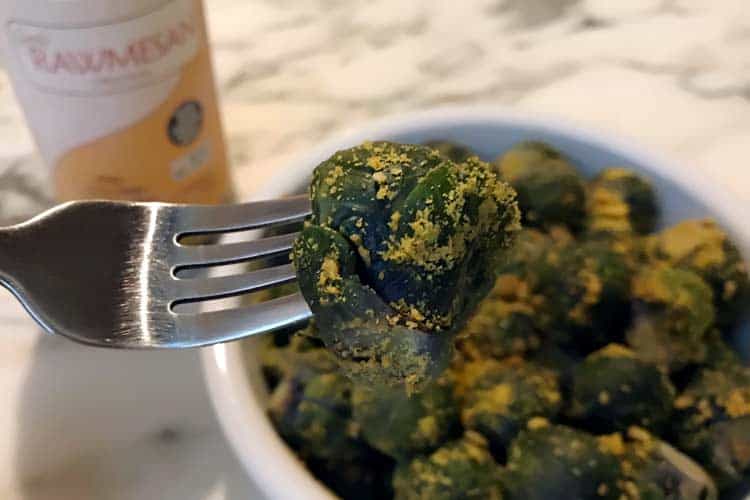 Unlike some other vegan cheese brands, this one is oil free. It’s made with protein-rich nuts, seeds, and B12-loaded nutritional yeast. Best of all it’s shelf stable. No matter you may live, chances are you can order some on Amazon.

Only 80 calories and 1.5g of fat per 5 oz serving. A perfect side dish for weight loss.