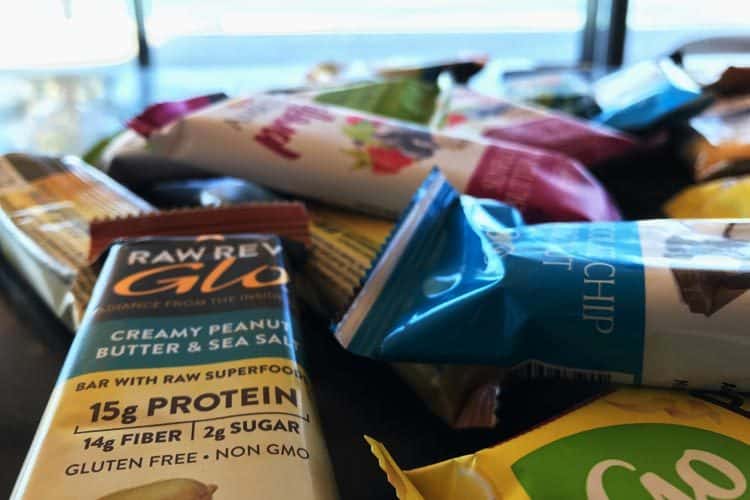 Protein Bars Made With Stevia a Bad Idea

If you look at the nutrition facts of a standard-sized Snickers bar, you’ll see it has 250 calories and 28g of sugar.

Meanwhile, a Probar “Superfood Slam” has 20g of sugar and 380 calories.

It is true that most protein bars on the market are lower in sugar. Many have 8-15g per bar.

In more recent years, a trend in the natural and organic food industry has been to forgo almost all of the sugar and instead, sweeten with stevia extract.

Protein bars made with stevia only include the brands Quest, No Cow (vegan), Garden of Life Organic Fit (vegan), and Julian Bakery Paleo Thin. Some of these also add artificial sweeteners like sucralose, or sugar alcohols like erythritol. However, there’s no added sugar.

In addition to these brands, there are dozens of low sugar protein bars on the market that sweeten with stevia or an artificial sweetener.

Pure Protein bar achieves 2-3g of sugar with maltitol syrup (a sugar alcohol) and sucralose. Sugar alcohols may have little to no impact on blood sugar, but since they ferment in the small intestines, they can create gas and bloating. Especially when consumed in large quantity.

BSN bars use a combination of maltitol and isomalto-oligosaccharide (IMO). The latter has fewer calories and a lower impact on blood sugar relative to sugar, yet it tastes almost as sweet. (3)

In addition to ready-made, you will see a plethora of recipes online which use stevia. You may assume the best protein bars are those sweetened with stevia. It’s a natural sweetener and doesn’t have the farting side effects of sugar alcohols.

However, stevia does have another side effect you probably aren’t aware of…

Before addressing this concerning issue, let’s address what stevia actually is.

Believe it or not, selling unprocessed or raw stevia leaves is actually illegal in the US (we’ll tell you why in a moment).

What you can sell in the US, Canada, United Kingdom, EU, and similar places is stevia extract. It has to be refined to contain at least 95% steviol glycosides.

However in Canada, you can’t call stevia natural. That would be illegal: (4)

“…due to its significant processing and the types of solvents used for its extraction and purification.”

The reason food and beverage companies in the US can call it “natural” is because that word is not legally defined here. So the protein powders and bars call themselves that. It doesn’t really matter what they’re made with.

So how is stevia actually made?

Well, here’s a diagram from a patent showing one of the more “simple” refining processes… 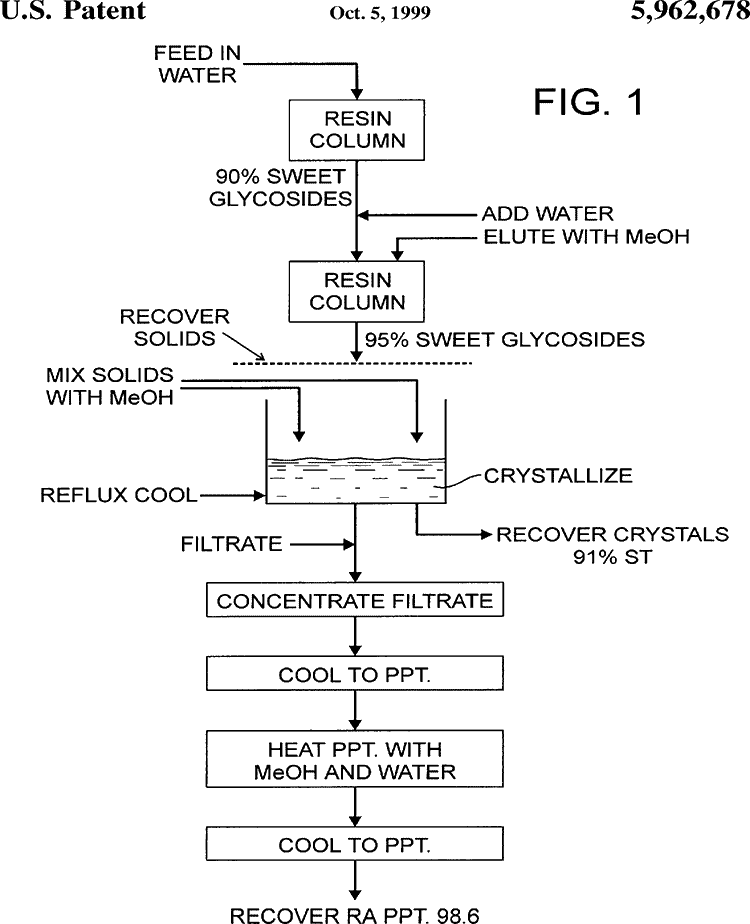 Many of today’s manufacturers actually use even more sophisticated processes. Doing so minimizes the bitterness of the herb. Only rebaudioside A (reb A), which is 2-4% of the leaf, is the desired part for making sweeteners. (6)

Is it really healthy?

Even if you view stevia as being natural, that doesn’t necessarily mean it’s good for you.

Plutonium is natural, too. Right?

You may think that’s a bad comparison, but stevia and plutonium actually have something in common!

The reason plutonium is bad is because it mutates your DNA. Big time.

The leaf itself is not mutagenic. The problem happens during digestion.

When the steviol glycosides are munched away by your gut flora, they convert it to a mutagenic compound called steviol.

This has been well known by the scientific community since at least 1985, based on rodent research. Even back then, they warned about how humans may be at danger for this (7):

“…complete metabolic conversion of stevioside to an active mutagenic species by human enzymic systems involved in the biotransformation of endogenous substrates or xenobiotics is possible.”

Did we heed the warning?

Did we conduct human trials?

Instead, we started using it in all sorts of foods and drinks.

Then in 2016, a human test was finally published. It was small, just ten guys, but the results were clear; what happens in rats also happens in humans (8).

In plain English, stevia is mutagenic.

Aspartame doesn’t do that. Nor does sucralose.

Yes that’s right… the so-called natural sweetener is the one you’re supposed to consume the least of! (9)

To be clear, the bars on the market that are sweetened with stevia are safe to eat. Their usage is within the FDA parameters. Manufacturers are not doing anything illegal or wrong.

The flip side of the argument would be… even if it only mildly mutates DNA, there’s no such thing as good DNA mutations… in any amount!

Plus, think of all the foods you buy that are sweetened with stevia. Just a single serving of that vegan protein powder may be the equivalent of 4 or 5 sugar packets of stevia (half your ADI).

You may be drinking 2 or 3 of those a day. Now you’ve exceeded the ADI.

Then add on that hard seltzer you drank on Friday. A lot of them sweetened with it.

Then there’s the protein cookie, cereal, or other food you ate which incorporates it.

Before you know it, you’ve already consumed 200% or 300% of the ADI. Do you really want to add protein bars made with it too?!

Sure, having some stevia on occasion isn’t the end of the world. But in light of these findings, it makes sense to diversify your diet with alternative sweeteners. Proteins bars made with monk fruit would be ideal but so far, no one is doing it.

For us here at Superfoodly, that means protein bars with low sugar content. Furthermore, we try and stick exclusively to those which sweeten with dates.

Date sugar is the lowest glycemic and highest antioxidant sweetener. Much better than honey, coconut nectar, and similar. 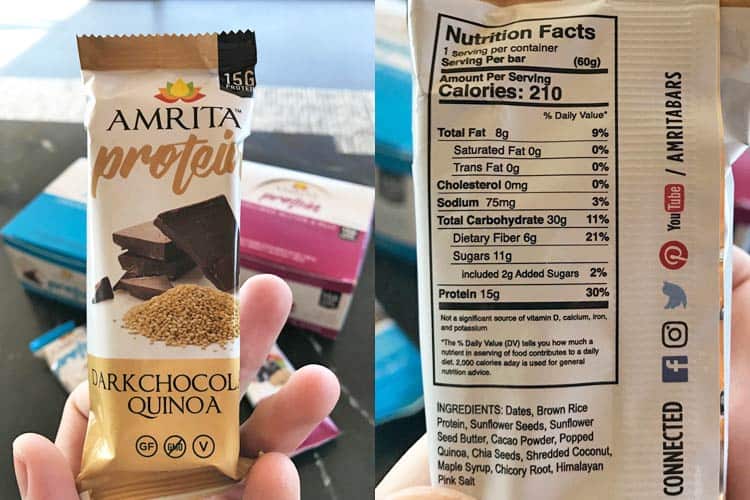 Our favorite are Amrita bars and you can buy them on Amazon. Above is a pic of what we have on hand right now.

That is 11g of sugar but because it’s from whole dates, the glycemic impact is comparable to unrefined carbs. Plus we uses these after a hardcore weightlifting session, when your muscles actually need glycogen replenishment (i.e. sugar).

Then check out Raw Rev Glo. 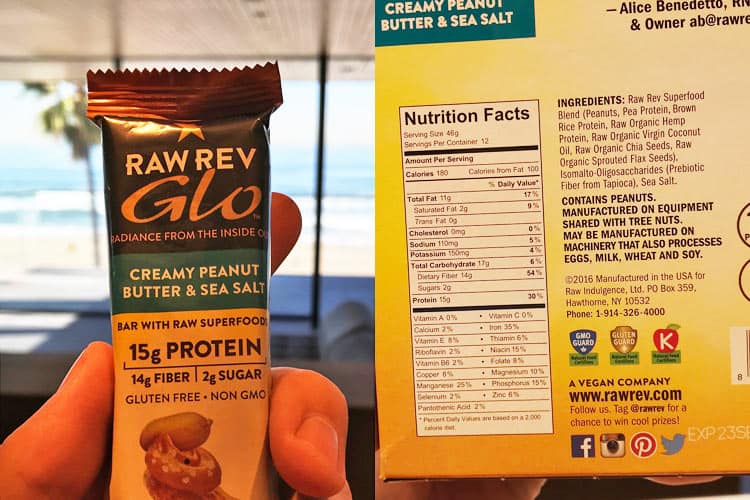 There’s just 2g of sugar, yet you would never know it.

That’s because they sweeten it with prebiotic fiber – it tastes sweet but doesn’t spike blood sugar like real sugar. You won’t find stevia inside.

We’ve tried a lot of them but keep coming back to this creamy peanut butter and sea salt flavor. We go through 2 boxes per month.