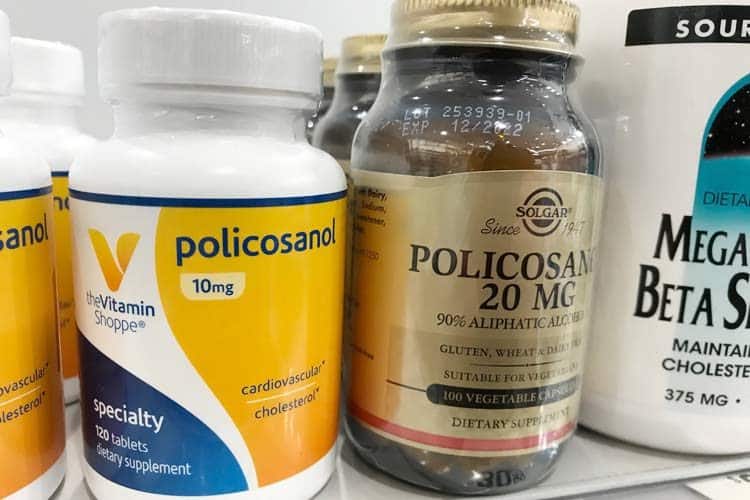 What is policosanol good for?

Typically derived from sugar cane wax, policosanol are long chain alcohols; octacosanol (66%), hexacosanol (7%), triacontanol (12%) and other types mixed together. They are basically regular alcohol molecules, except their “backbone” of carbon atoms is 24 to 34 long.

Their history for heart health dates back to the 1990’s. Dalmer Laboratories in Cuba was the first to isolate and clinically study them. Even though sugar cane was the first source used, policosanol from rice wax/bran, wheat bran, beeswax, nuts, seeds, and other plants can be used. (1)

Some studies suggest policosanol is good for lowering cholesterol,  blood pressure, promoting circulation, reducing anxiety, stroke recovery, and weight loss. The body of evidence to support these uses is preliminary and no health benefits are considered proven.

Some of the research is believed to be biased, in order to promote policosanol from Cuba.

That’s because a number of early human studies out of Cuba reported a 100% success rate while using it for treating LDL cholesterol, with a lowering effect that allegedly rivals prescription statin drugs.

The problem is that when you exclude the Cuban data, the overall success rate in human clinical studies is more in the neighborhood of 15%.

Obviously, the large discrepancy raises red flags as to why the Cubans report it working so much better.

Controversy aside, the following policosanol reviews are based on what are believed to be trustworthy data. Please keep in mind that none of the benefits are proven and this supplement should not be used to diagnose, treat, cure, or prevent any disease.

If you search the PubMed database for human clinical trials about policosanol for lowering cholesterol, you will get over 50 results.

Some early studies, like the 2001 coming from a hospital in Argentina, also report it working. (4)

The problem is that many of the studies from the past decade or so report lackluster results.

Also, many of the studies which report policosanol working involve using it with red yeast rice, CoQ10, artichoke leaf extract, omega 3, resveratrol, L-carnitine, B vitamins, and other supplements. Those aren’t useful for determining the effectiveness on its own. (5) (6) (7) 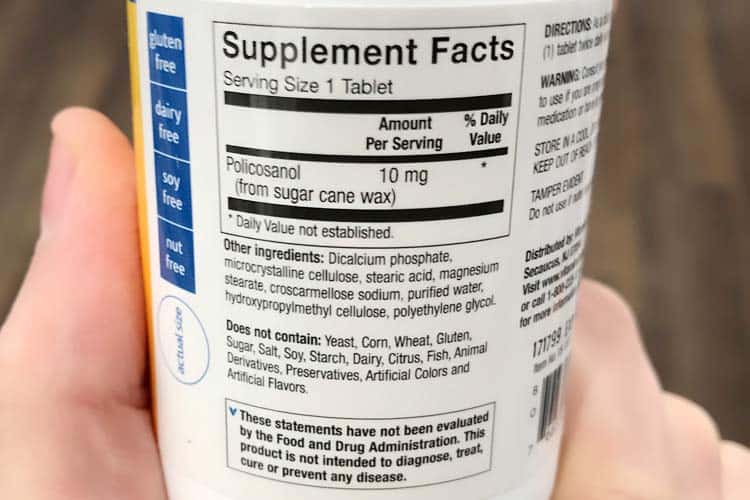 10 or 20 mg is the typical recommended dosage listed on supplements, which are sold in tablet and capsule form.

A 10 mg dosage of sugar cane policosanol taken for 8 weeks was ineffective at lowering cholesterol in a double-blinded Italian study involving 31 patients. (8)

A clinical trial involving 54 HIV patients found no benefits for lipid profile. Perhaps the only good news was that there didn’t appear to be side effects, nor did it appear to worsen the HIV progression. (9)

Even those involving a higher dosage of 20 mg reported failure. (10)

Does this mean it’s scam? Maybe not. Maybe it only works for people with a certain gene.

In 2017, a Chinese trial was published where each person received either policosanol supplements or pravastatin. Better known as Pravachol, that’s a medication used for treating high cholesterol and triglycerides. (12)

“Policosanol also induced a significant decrease in the total cholesterol and LDL-c levels in patients with the GG genotype (P < 0.05). The various genotypes of the ApoA1 G75A SNP influence the efficacy of lipid regulation by pravastatin and policosanol in patients with hyperlipidemia.”

Based on the most recent research out of China, if policosanol does lower cholesterol, it’s probably most effective in people with certain genotypes that are known to influence blood lipid profiles. For the general population with high cholesterol, the evidence is a mixed bag.

This is the good kind of cholesterol you generally want higher. Not much clinical data is on the exclusive use of policosanol to raise HDL cholesterol.

In 2017, a South Korean university published a study involving 25 men. They took a 10 mg daily dosage of policosanol for cholesterol. 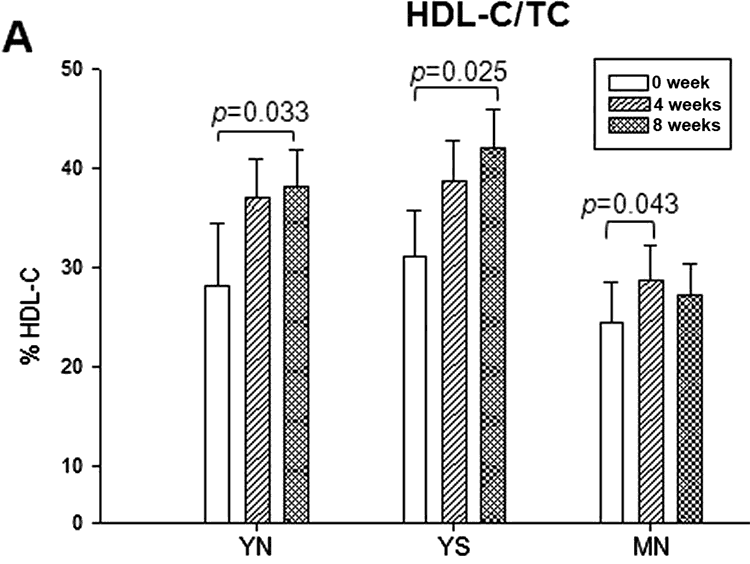 You can see how in all treatment groups, their percentage of HDL cholesterol went up and results got better the longer they took it. (13)

In the same study that reported a boost in HDL, there was a decrease in blood pressure while taking policosanol. All groups experienced an improvement after taking a 10 mg dosage once daily for 8 weeks.

The best results were in the middle-aged men, whose systolic went from 134 to 127 and diastolic from 83 to 78.

Interestingly enough, these results are similar to one of the controversial Cuban studies from 15 years earlier. (14)

Policosanol benefits for weight loss are among the least studied. In a clinical trial involving 25 men who took the supplement for cholesterol, after 8 weeks they experienced a drop in BMI, body fat percentage, and visceral fat. This suggests policosanol supplements may offer potential for losing weight, too.

Given the lack of studies on weight loss, it’s too early to gauge the likelihood of it working.

Published in 2017, a long-term study followed 80 patients after suffering an ischemic stroke of the brain.

Done in a randomized and double-blinded manner, each patient received one of the following daily treatments, beginning within 30 days of their stroke:

This is one of the few policosanol long term studies, since they were monitored for a full year.

A quote from the results:

“Policosanol/aspirin increased significantly Barthel Index (BI), lowered LDL-C and increased HDL-C versus placebo/aspirin, treatments were well tolerated. There were 12 withdrawals, three due to fatal adverse events all happened in the placebo/aspirin groups.”

The Barthel Index (BI) is a widely used measure of functional disability following a stroke. Those on the policosanol and aspirin improved much better when compared to placebo and aspirin. Furthermore, there were no deaths after 12 months in the supplement group, but the placebo group experienced 3 “fatal adverse events” (they died).

The catch? This trial was conducted by the National Centre for Scientific Research in Cuba. That aspect draws suspicion but this was published in 2017 and appears to be a well-designed study, with 10 different researchers involved. (15)

Claudication is pain caused by too little blood flow. It often happens during exercise in the legs and less commonly, in the arms.

A few clinical studies suggest policosanol benefits circulation (intermittent claudication) but the last one was published over a decade ago and all are out of Cuba.

One of the most intriguing was a 2-year double-blinded and randomized study involving 56 patients who were otherwise healthy. Those on a 10 mg twice daily dosage of policosanol capsules experienced continuous improvement in leg pain throughout the study. 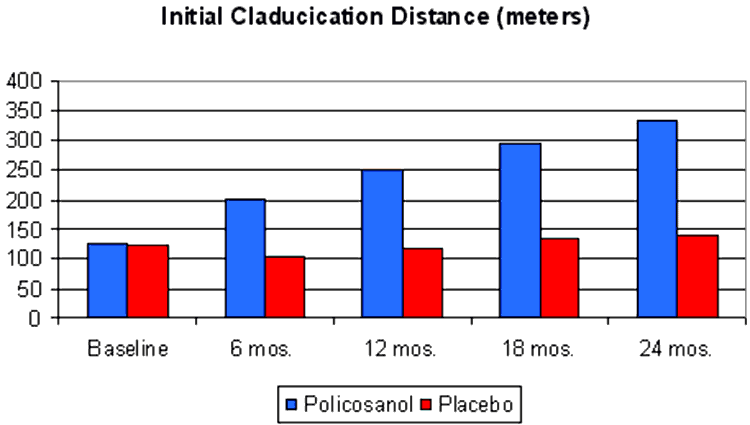 The Initial Claudication Distance, which is the distance of pain-free walking, improved from 6 to 24 months out in an increasing manner. The placebo group flat-lined during that time. (16)

Platelet aggregation, dead endothelial cells shed from the artery wall, and other factors can all affect blood circulation. It is unknown which factor, if any, the policosanol is helping.

Aside from general inflammation and cell damage, the oxidation of cholesterol and other lipids in the blood contributes to heart disease. This in turn may increase risk of heart attacks and congestive heart failure. (17)

The first study looking at how policosanol treatment may affect LDL cholesterol oxidation was from 2000 out of Havana. They reported a reduction. (18)

Another out of Havana reported that it reduced cholesterol oxidation in patients with type 2 diabetes. (19)

Nearly a decade later, McGill University in Montreal reported that sugar cane policosanols do not exert antioxidant properties, as there was no difference seen in the LDL oxidation rates. (20)

It’s unlikely that the long chain alcohols themselves have antioxidant activity, though some research – if it’s to be believed – does hint at the possibility of them indirectly being antioxidants, by promoting a metabolic profile which naturally results in less oxidative stress.

While the efficacy of policosanol remains debatable, the good news is that the clinical studies so far report few to no adverse reactions with usage. While using therapeutic dosages of 5-25 mg daily, liver damage/toxicity and other common supplement concerns have not been seen with policosanol from sugar cane extract or rice bran wax. A list of side effects on Mayo Clinic is not published, presumably because it’s one of the lesser known cholesterol lowering supplements. (21)

Policosanol drug interactions may include warfarin (e.g.  Coumadin, Jantoven) and other blood thinners, including non-prescription aspirin. No interference was reported in a human study using 25 mg of policosanol taken twice daily. Rodent research has reported that it may intensify the anti-platelet activity of warfarin. (22)

Policosanol with red yeast rice, gugulipid (gum guggul), Sytrinol, or any of the other supplements it’s commonly mixed with may be more likely to cause adverse reactions. That’s because many of those other common additives are better documented as having side effects and drug interactions.

Safety of policosanol supplements during pregnancy or breastfeeding is unknown, as neither has been studied in humans or animals.

Policosanol made in Cuba using their local sugarcane have been touted as being better or the best, but that’s just marketing. You can’t even buy Cuban-made ion the US anyway, despite improved relations between the two countries.

On a molecular basis, it doesn’t matter where the sugarcane comes from. A given plant species will produce the same mixture of long chain alcohols, regardless of where it is grown. 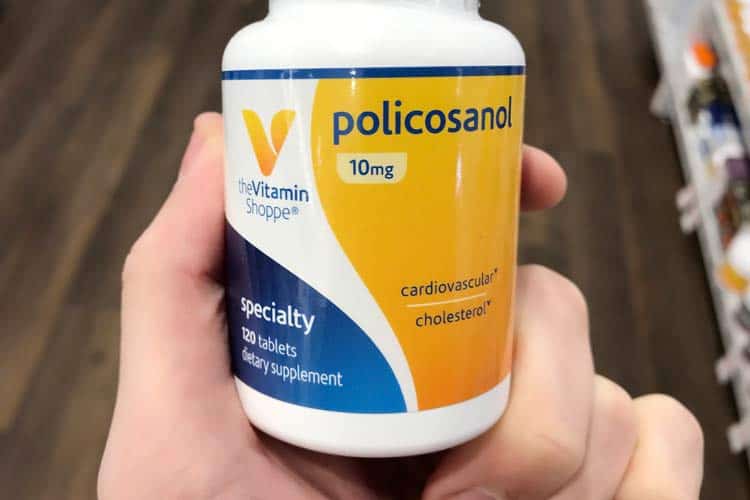 GNC and The Vitamin Shoppe brands sell it in a 10 mg tablet dose.

Popular brands selling it include NOW, Solgar, Swanson, Vital Nutrients, Jarrow Formulas, and Pure Encapsulations. Because policosanol is such a niche supplement, you’re unlikely to find it at stores, even when they carry those brands. With the exception of places like The Vitamin Shoppe and GNC, it’s tough to find in-store. Not a CVS or Walmart kind of supplement.

On Amazon, check out the 20 mg v-caps from Solgar, or another reputable brand.