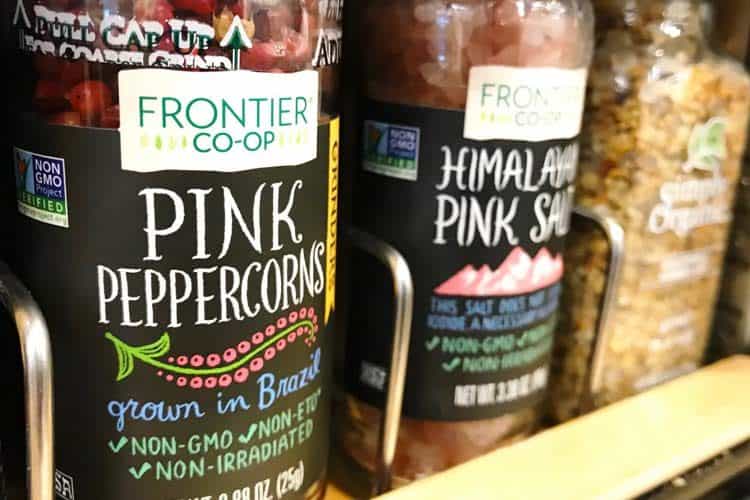 What Is Pink Peppercorn? Not Pepper, But Taste With Toxicity

Black aside, we have told you about Sichuan peppercorns and alligator pepper, among others.

One we haven’t yet told you about is the rose-colored variety.

It may be the most important one to know about. Why? Because if you’re not careful with it, poisoning might result. Though in reasonable quantity as a spice, it’s likely safe for most people to eat.

Despite their name, pink peppercorns are not real pepper. They are members of the cashew family, which is not closely related to black pepper (Piper nigrum) or sweet and chili peppers (Capsicum annuum). They come from the Peruvian peppertree, which is only given that name because its berries resemble peppercorn.

The tree grows as an invasive species in California, Texas, Alabama, Louisiana, Florida, and Hawaii. Primarily for decorative landscaping, not as a food source. 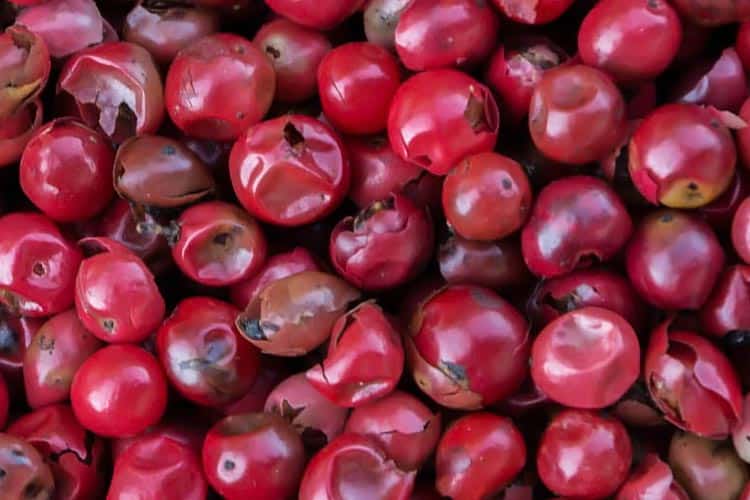 Pink and red peppercorns are the same thing. They’re referred to as red less often.

There are a couple species used for spice, with Schinus molle being the most common. The closely related Schinus terebinthifolia is harder to find, though McCormick does include it in their medley grinder.

What pink peppercorn tastes like is similar to regular black pepper, but they’re less sharp and have a subtle sweetness. A light citrus flavor with a rose-like aroma. In spite of their redness, they’re not spicy hot like cayenne or chili. Unlike black peppercorns which require grinding or soaking, the pink or red peppercorn berries are softer and can be eaten whole with minimal chewing.

For recipes where you want a dispersed flavor, it’s best to crush them with a knife or spice grinder. Using a regular pepper grinder doesn’t work so well; if filled with 100% pink, the berry skins can break apart and clog it up. 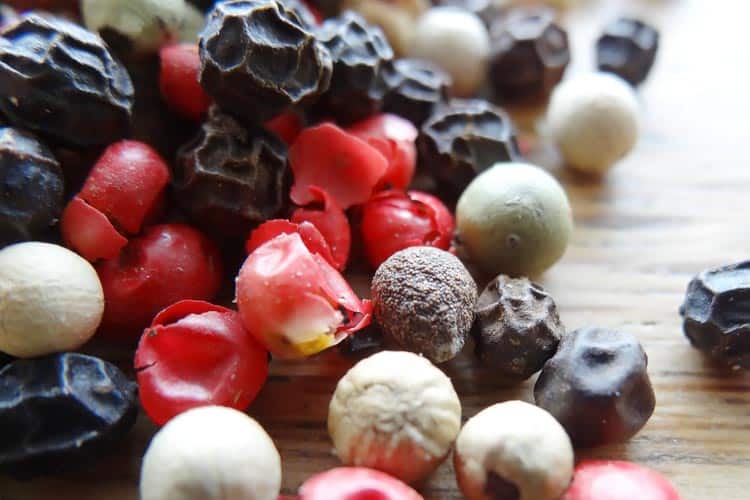 Because they help to balance the pungency, pink go well with black, green, and white peppercorn. Those three are real pepper that originate from the same Indian plant. Their difference is preparation. Green peppercorn are harvested premature. The white have had their black skin removed.

In addition to mixing with black and white pepper, pink pepper goes well with leafy salad greens, zesty desserts, and to flavor delicate sauces that are used on seafood. They can be used for just about any dish. Their mild flavor won’t be overpowering.

Pink pepper essential oil is frequently used in perfumes and body care products. It has a slight rosy smell that is accented with woody and smoky undertones, somewhat similar to juniper berries. Doterra, Young Living, and most essential oil manufacturers don’t sell it, but Eden’s Garden has it on Amazon.

As with many spices and imported exotics, their use in the United States didn’t really catch on until a few decades ago.

In 1981, a group of advisors from academia reported that the peppercorns pink in color can cause side effects similar to poison ivy on the skin. When ingested they can cause difficulty breathing, headaches, swollen eyes and throat, stomach pain, and diarrhea.

This led to the FDA banning their import. The few high-end retailers carrying them at the time, such as NYC’s Dean & DeLuca, voluntarily recalled them.

The French, who were the primary exporters of the spice at the time, disagreed with the US government and lobbied for an appeal. Eventually the ban was overturned but the FDA has not deemed them to be officially safe.

The two main species of pink peppercorn, Schinus molle and Schinus terebinthifolia, both lack the FDA’s “generally recognized as safe” (GRAS) status for human consumption. Some scientific literature also reports the berries are poisonous to livestock like cows, pigs, and chickens.

Today the general consensus is that pink peppercorn is edible and safe to eat, within reasonable quantity, such as in the seasoning of food. Patient case studies of kids throwing up and experiencing diarrhea after eating the wild berries does suggest there are poisonous or toxic characteristics, particular when too many are eaten.

One or more of the toxins may be the essential oils. Some of the oil types, which are found in other plants, have been documented for causing digestive side effects. The main chemicals in pink pepper essential oil are a-phellandrene (31.74%), limonene (16.82%), ß-phellandrene (16.49%) and p-cymene (11.36%).

It is possible that some reports of food poisoning from eating them were actually unidentified allergies.

Cashews are a relatively common nut allergy. Their plant family, Anacardiaceae, also includes sumac, mango, pistachio, and pink peppercorn. While no immunologic or in vitro (lab) studies have been done to prove crossreactivity, it is assumed that there is an increased chance you might be allergic to red/pink pepper if you are allergic to cashews and/or other plants in the same family. (1) (2) (3) (4) (5)

Although preliminary, there are scientific studies which suggest pink peppercorn health benefits do include or may have potential for:

As with many spices, the amount of calories you’re consuming in an average serving is fewer than 5. Much better for weight loss versus oil, butter, mayo, and most other condiments.

Ctenocephalides felis felis is among the most common species that affects furry pets. In lab tests, the essential oils of pink pepper fruit and leaves was found to have “100% efficacy against adult fleas at 800 µg.”

However, the oils did not work against flea eggs. (6)

The essential oils have also demonstrated strong activity against both Gram positive and Gram negative bacteria. (7)

One study out of a Portuguese university reported that it had a “potent antibacterial effect” against tested strains of Staph and E. coli. (8)

ORAC values have not been published, but they are packed with anthocyanins. No surprise, given their bright red color. (9)

the stages of apoptosis

Apoptosis is the process of controlled cell death. It’s part of the normal life-cycle for all cells.

However cancer cells are notorious for evading this process.

Through influencing apoptosis, preliminary research has reported that the pink pepper oil had an inhibitory effect on the growth of cultured breast cancer and leukemia cell lines in the lab. (10)

Another study reported anti-cancer activity on cultured liver cells, without identifying the mechanism. (11)

In traditional medicine practices of South America, the pink peppercorn are one of the plants used for diabetes.

Modern science suggests this benefit might be legit, based on the alpha-glucosidase inhibitory activities seen in the lab with them. If that’s occurring in humans, it would be slowing down the digestion of carbs/sugars. (12)

German scientists report that certain peppercorn extracts may promote the healing of wounds, based on lab activity showing their influence on related biological functions involved with tissue re-growth. (13)