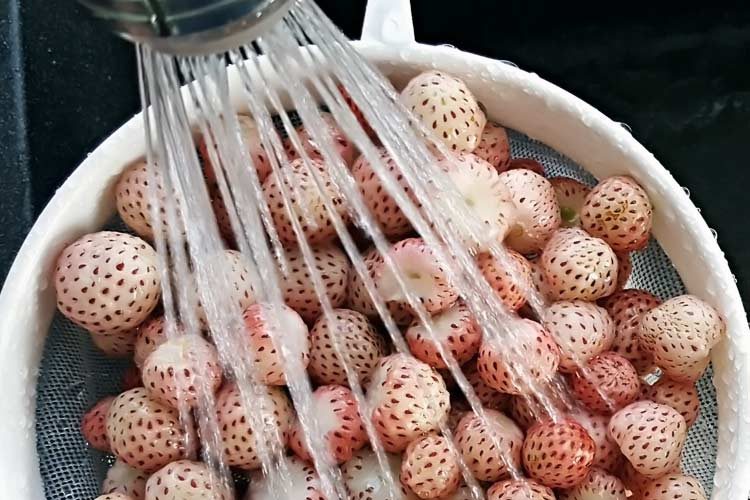 Pineberry (White Strawberry) Is Real, Where To Buy Them?

When it comes to unbelievable natural foods you hear about online, at least 90% of them are fake.

Before you even bother to investigate one, here are some patterns to look for which are telltale signs:

Are pineberries real? Just one of these white colored strawberries costs a reported 1080 Yen ($10) in Japan. They’re said to taste like pineapples. Most surprising, all of these claims are true. Yes, the pineberry really does exist! It’s not fake and some research suggests they may centuries-old.

The largest variety is called “Scent of First Love” (Hatsukoi No Kaori) and it was created by Miyoshi Agritech Co. You won’t find them for sale at grocery stores. They’re only sold at high-end department stores in Japan. 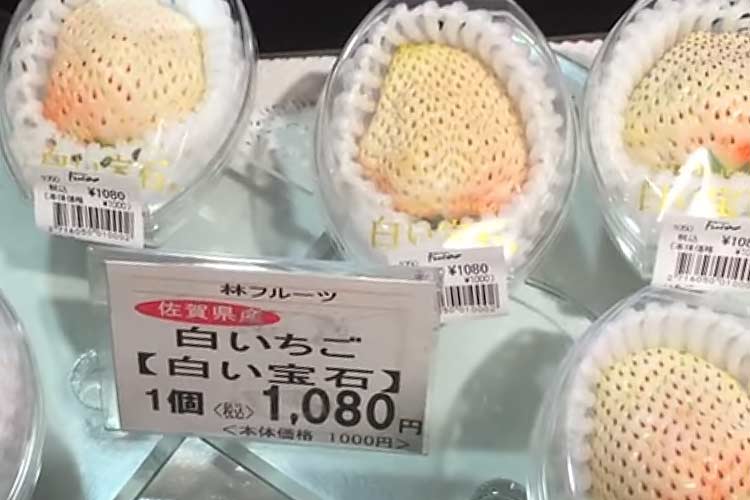 There is also “White Jewel” (Shiroi Houseki) which is about twice the size of those.

Is the white strawberry genetically modified? Nope. Believe it or not, the plants which produce these were created over a period of nearly 20 years using conventional cultivation methods. (1)

Miyoshi considers their process proprietary and in turn, hasn’t published much detail on it.

It has been theorized – but not proven – that they crossed the common red with white Alpine strawberries (Fregaria vesca). Those are known species of tiny cream colored berries. The plants only grow around 8 to 10 inches tall. Given their small size, it would make sense why many generations of selective breeding over two decades would be needed to create those gigantic juicy berries the Japanese are selling.

From the Fregaria vesca species, the “Alpine Yellow” and “White Soul” seeds with photos are on Amazon. These perennials are hardy in growing zones 3 to 10. If you try planting them, let us know how it goes.

Separate from what Miyoshi Agritech created is another pineberry strain with roots in Europe. Selective breeding of the Virginia strawberry (Fragaria virginiana) and a South American species known as Beach and Chilean (Fragaria chiloensis) were used. This was accomplished by Beekers Berries, a Netherlands-based farm.

The “Scent of First Love” and “White Jewel” are only sold in Japan and the Middle East, but this smaller version from Beekers can be found throughout many parts of the world, including the United States. It’s the most common type. 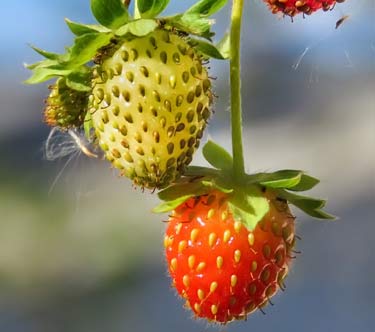 Many assume they are just green strawberries which haven’t ripened yet, but that’s not the case. Those are yellowish-green in color and have green seeds. An authentic strawberry white variety has red seeds.

Owner Wil Beekers says not 100% of people think it has a pineapple flavor “but at least 50%” will say it does. Some describe them as having the sour taste of strawberry-flavored Jolly Rancher candy. They are good to eat, but anyone claiming they taste just like pineapple is stretching the truth.

Flavor aside, the other reason these white fruits were given this name is because their green stem resembles that of a pineapple.

When a pineberry is cut in half, it’s 100% white inside. Not something that looks sweet, but it definitely is.

Beekers trademarked the name Natural Albino® for selling them and it’s true – these white strawberries are non-GMO.

In fact, they may have been around for centuries.

Centuries ago, the South American strawberry produced some white fruit with albino mutations.

The species we consider today to be a normal garden strawberry (Fragaria x ananassa) is actually a crossbreed of the one from South America (Fragaria chiloensis) and the Virginia (Fragaria virginiana) from North America. During the 1800’s while in transit to Europe or shortly thereafter, these two spontaneously crossed to create the red juicy variety you buy today sold by Driscoll’s and others. (2) 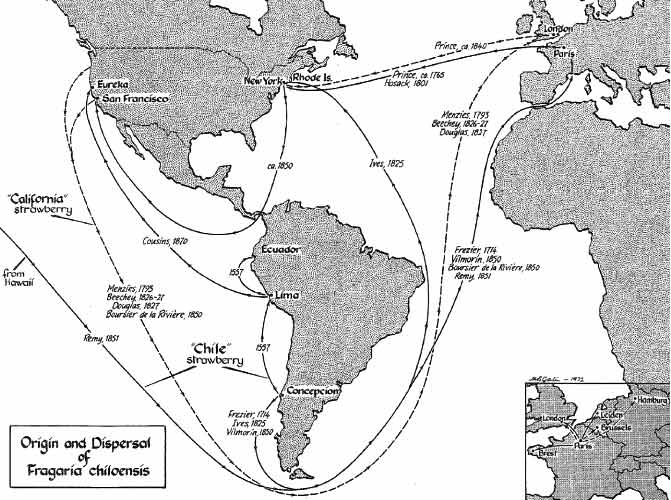 What Hans de Jong did was botanically “reverse engineer” the history of the white strawberry back to its origin some 200 years ago. He brought back that spontaneous crossing that was almost lost. Or at least, that’s what all his research has pointed to.

The first seed he used really was old and produced a white crop. It was obtained from a French heirloom seed collector, but when it grew it was “small and sickly” (3). It took time for him to breed it to become the healthy plant that’s for sale today under the name Natural Albino.

You will never see an entire garden of these pale colored fruits. Since the albino producing plants are all female, they’re not self-pollinating. They always require cross-pollination from their red counterparts. This means every other row of the plant needs to be a normal variety.

An even more recent newcomer on the market is the Hula Berry®. That’s a trademarked name that California-based Pacific Plug & Liner Co. uses to sell their plants. Where they come from is not clear. They look identical to Beeker’s version and might actually be the same thing, but just sold under a different name for gardening here in the US. 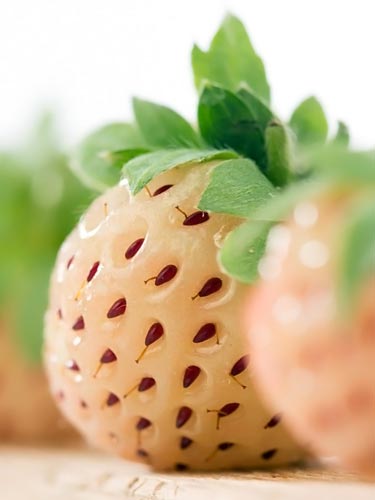 These are 100% non-GMO and can be grown organic.

Can you be allergic to strawberries? Yes, but the chances of that are slim. Based on a survey among 40 primary care pediatricians in Bosnia and Herzegovina, 95% reported treating at least one child with this allergy. At age two, the prevalence is as high as 3 to 4% but by late childhood, it drops off to 0.5% to 1%. That rate – or lower – is believed to be the percentage of adults with a strawberry allergy. (4).

The PR10 family of proteins in the plant is what causes the allergy, especially the Fra a1. Since pineberry plants lack this protein, they are unable to ripen normally and create the red pigments known as anthocyanin.

One benefit is that since they don’t have the Fra a1 protein, they might be suitable for people who have an allergy to the traditional version. Though consult your doctor before trying. (5)

While that missing protein may benefit 1% of people, it’s a drawback for the other 99% of us.

That’s because much of the antioxidant content in this fruit come from the anthocyanin.

Some websites allege the white are healthier than red strawberries, calling them “an antioxidant bomb” and alleging they “keep your energy levels high” while “strengthening your immune system.”

None of those claims are based on research. There is not a single entry in the PubMed database about this albino berry and detailed nutrition facts haven’t even been published for it.

Even without the anthocyanin, they still contain respectable amounts of vitamin C and are good for you. However you can’t claim they’re healthier for you than the red.

Even though they may be less nutritious, that doesn’t mean they don’t have a place in your diet.

Their best use is for social gatherings where you really want to have that wow factor in the food you serve. 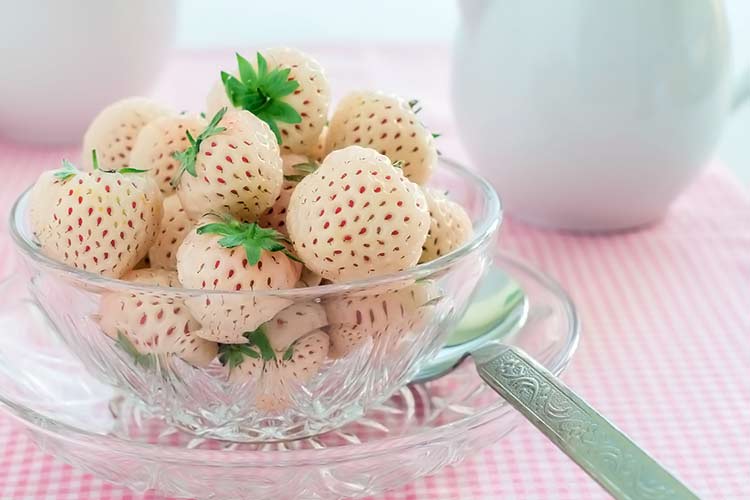 They look fake, like you’re playing a hoax. Imagine the conversations that will arise when your strawberry shortcake or even your basic fruit salad is chocked full of these white beauties! Most people will be seeing and tasting them for the very first time. That should leave quite the impression.

Where can I buy pineberries?

Beekers is based in Holland and they can’t ship these because their shelf-life is so short. That means they must be grown locally, close to wherever they are sold. The fresh are expensive, but they’re worth it for entertaining.

Their growing season is short – merely 5 weeks – so if you encounter them at a store, make sure you don’t pass the chance up to taste them. In the UK, the supermarket chain Waitrose sells them for £3.99 when in-season. In the US, they made their first appearance at Dean & DeLuca in New York City several years ago at a cost of $5.99 for a half-pint.

Frieda’s is a specialty produce supplier out of Orange County, California which has been known to sell them to Southern California grocers on occasion, but we have never seen them stocked in the Los Angeles area at any store.

Given that most people assume they’re GMO, they’re probably a tough sell to make if you’re trying to capture a customer who randomly encounters them in the produce aisle. That, along with being more perishable, is probably the reason they haven’t caught on yet. 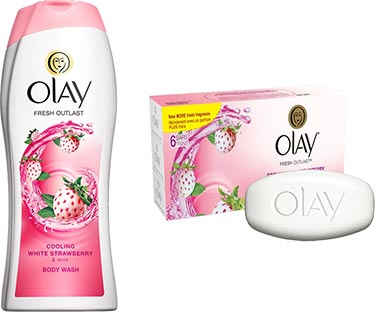 At least one major beauty product – Proctor & Gamble’s Olay – has incorporated the smell into their body wash. Their marketing says there are “aromas of white strawberry & mint leave” but it’s not clear if the real thing is inside… probably not! We have never seen this at a CVS, Target or Walmart, but you can get it on Amazon and based on the reviews, it sounds like people really like it.

The only sure way to get your hands on a fresh pineberry is to grow the plants yourself. You can get PP&L’s Hula Berry brand online. Without using a brand name, Brighter Blooms has the live plants for sale.

Make sure you get a red variety (any will work) to grow in a pot alongside them for pollination purposes. Once the flowers bloom, make sure they’re outside so the bees can do their thing.