Is it a fruit or a vegetable?Originally spawning from Southern Africa, this delicious red melon has become synonymous with summer barbecues and 4th of July celebrations here in America. But is watermelon a fruit or a vegetable? About a decade ago, in 2007, legislators of the Oklahoma State Senate actually acted legally to solve this controversy, by declaring it "the official state vegetable" with a 44 to 2 vote.Technically though, the answer differs depending on whether you're answering it from a scientific or a culinary perspective. This is because "fruit" is scientifically defined in botany, while "vegetable" is not.The definition of the word "fruit" is a scientific term in botany; it's the structure which develops from the ovary of a flowering plant and contains the seed(s). The word "vegetable" is a culinary (not botanical) term which refers to all the other parts of an edible plant, such as the leaves, stems, and roots. That is the difference between the two terms, yet many foods can fall under both categories. 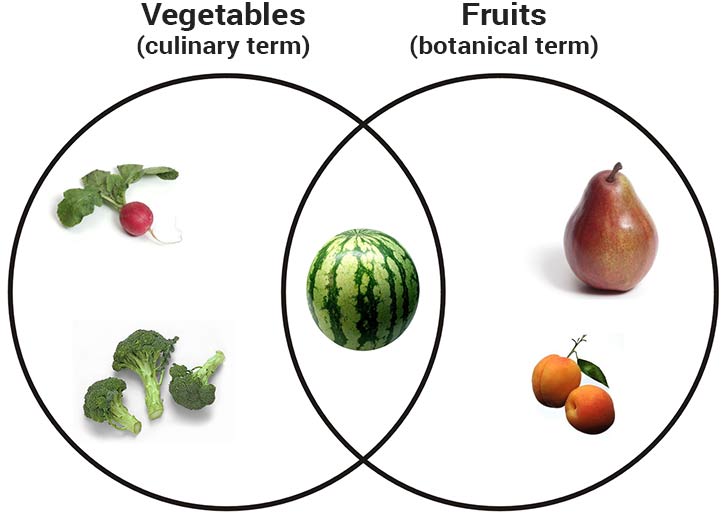 For example, a tomato is scientifically a fruit, since it is the structure which developed from the flower's bud. Yet using culinary as well as a layman's definition, a tomato is considered a vegetable since it's not thought of as being sweet like a fruit. Both labels are correct in their own sense since (1) it is an edible portion of the plant, and (2) it comes from the flower's blossom. There is significant overlap among fruits and vegetables which technically fall under both categories, the watermelon being one of them. Some are exclusive to only one category, such as a carrot or broccoli.If only the scientific community would adapt and officially define the word vegetable, we wouldn't be having this discussion!Is watermelon healthy?Setting aside whether you want to call it a fruit or vegetables, the more important question... is watermelon good for you to eat?The bad news is that this is one of the lowest antioxidant fruits in existence. On our ORAC chart containing hundreds of different foods, you won't find many whole foods which rank lower than it. Rather, how much antioxidants are in watermelon is more comparable to a Budweiser beer and canned tuna, which have ORAC values of 150 and 90, respectively.Albeit in extremely small quantities, the antioxidant content in watermelon mostly comes from the activity of the red color flavonoids, which contain beta-carotene (vitamin A) and lycopene. Does watermelon have more lycopene than tomatoes? If you have heard that factoid, it is true but also highly misleading. Why? Because even though tomatoes have about 33% less lycopene, we often eat them in a more bioavailable form by cooking them. Lycopene is one of the very few nutrients which do not break down when heated and instead, actually become more bioavailable for absorption in our digestive system. Since melons are almost always ate raw and cold, the bioavailability of lycopene in this melon will likely be less than if you were to consume an equal weight of a cooked tomato or products made from them, such as pizza or spaghetti sauce.There is a moderate amount of vitamin C too; 12.3 mgs (20% of your daily value) within within 1 cup diced (152 grams).Even though the total amount of antioxidants is low, watermelon does offer other health benefits in the form of phytonutrients. The same aforementioned serving size yields 250 mgs of citrulline, which is an amino acid we convert to another amino, arginine. A particular anti-inflammatory phytonutrient in watermelon, cucurbitacin E, has been shown to neutralize reactive nitrogen species (RNS). Like oxidants, RNS can trigger or promote the production of damaging free radicals in your body.Is it good for weight loss? Diabetics? Dogs and cats?For pets? Starting with the last question first, contrary to what some believe, watermelons are safe for dogs and cats. They are not poisonous or toxic. So if a piece falls on the ground during your Labor Day BBQ and your Labrador retriever slurps it out, there's no reason to freak out about it. That being said, the seeds may be pose an intestinal blockage risk (especially in smaller breeds) and therefore should be removed before you allow your pet to eat a piece. Also the tough and hard rind, while not unsafe, can cause digestive discomfort and symptoms in dogs and for that reason, it's not a good idea to allow them to eat it. Even though we humans love the sweet taste, cats don't taste sweetness and therefore, are enjoying it with an entirely different perspective. Dogs on the other hand, do taste sugar and especially salt, which is why they love to lick our hands, arms, and legs because of the salty sweat residue on our skin.Is watermelon a good diabetic food? If you have diabetes, it's not the best choice. One cup of the fruit contains 9.4 grams of sugar. Normally for a fruit, this wouldn't be that bad for you except for the fact that watermelons are 90% water and contain very little fiber content. For that reason, the sugar is absorbed much more quickly and it's why watermelon has a Glycemic Index (GI) of 72, which places it in the category of high glycemic foods. However on the plus side, its Glycemic Load is only 3.6, since just 5% of the fruit's weight is made up of carbohydrates. So as with most fruits, there are advantages and disadvantages when it comes to the potential heath effects for a diabetic person. Whether you have type 1 or type 2 diabetes, you should consult your doctor first before making this a part of your diet.Is watermelon a good diet food? With 1 cup only containing 46 calories, upon first glance it seems like it would be good for you as a healthy snack. It is true that this is probably a lot better for you than any refined and processed snack food that you buy in a bag or a box. However, it's not the ideal fruit for weight loss. Why? Because given its low fiber content, you won't feel very full after eating it and because the Glycemic Index is high, that sugar buzz will quickly dissipate, probably causing you to be hungry again in a hour. A better choice for weight loss is something that keeps your tummy feeling satisfied. One diet food we like a lot are fresh red apples because they taste good, have much higher fiber content, and exponentially higher amounts of antioxidants versus any type melon, including honeydew and cantaloupe (which aren't much better than watermelon).