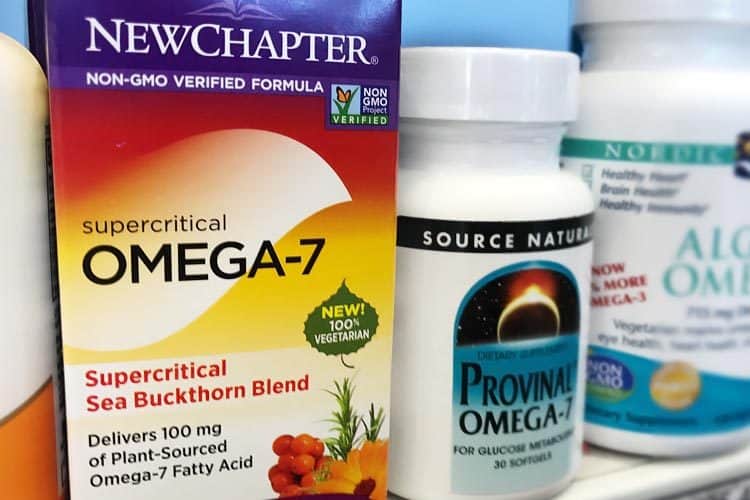 Omega 7 Benefits: What Are The Foods & Supplements Good For?

Everyone talks about fish oil and omega 3, yet this numeric fatty acid is one you rarely – if ever – hear about.

As such, science has only begun to scratch the surface as to what health benefits it may offer.

Fat molecules are categorized by the number of carbon atoms in their tail and how many double bonds there are.

The number tells where the first double bond occurs.

For omega 3 and 6, the double bond is the 3rd and 6th carbon atom from the end, respectively. For omega 7, it occurs 7 atoms from the end. This fatty acid formation is very rare in both the plant and animal kingdom.

The most common types of omega 7 fats are palmitoleic acid, found primarily in sea buckthorn and macadamia nuts, and vaccenic acid, which is higher in dairy vs. plant-based sources.

The most widely used form for dietary supplements is conjugated linoleic acid (CLA). It’s actually an omega 6 which is derived from omega 7 oil. CLA occurs in ruminant animals like cattle, goats, and deer. Technically known as rumenic acid, it’s found alongside vaccenic acid, but in a much smaller quantity.

All forms of omega 7 fat are unsaturated. That means they are liquid at room temperature, unlike saturated which are solid.

Preliminary findings suggest that omega 7 is good for reducing inflammation, blood sugar regulation, and accelerating the metabolism of fat. As such, this supplement has become of particular interest for obesity, type 2 diabetes, and heart health.

The first human clinical trial that used omega 7 supplements wasn’t published until 2014. Conducted by The Cleveland Clinic, a total of 60 patients participated.

They were chosen because they had dyslipidemia; high LDL cholesterol, triglycerides, or both.

Each patient received a 220 mg daily dosage of omega 7 (palmitoleic acid) or a placebo of medium chain triglycerides (MCT oil).

The only other human clinical trial was in 2017. It was conducted by Mexico’s National Institute of Medical Sciences and Nutrition.

In a double-blinded and randomized manner, 20 patients with ulcerative colitis (UC) received a 720 mg omega 7 softgel dose per day, or a placebo.

After 8 weeks of treatment, significant improvements were seen in C-reactive protein levels and gene expressions related to inflammation.

“Cis-palmitoleic acid [omega 7] as co-adjuvant therapy for 8 weeks seems to decrease the inflammatory activity through the increased expression of HNF4a and HNF4γ in patients with UC.”

Human clinical studies for diabetes have not been done, but lab and animal research reports that omega 7…

“…has hormone-like properties and improves some metabolic parameters that are impaired in obesity and type 2 diabetes.”

The following diagram, which was published in a prominent medical journal, summarizes how the benefits are believed to work:

Unlike most other fats which have a negative side effect on insulin sensitivity, it has been reported that palmitoleic acid improves it in animal studies; boosting pancreatic cell survival and insulin secretion.

In one study, macadamia oil, which is a rich food source of omega 7, was found to partially offset the metabolic changes normally caused by high-fat and high-carb diets. (3)

In 3,736 people who were evaluated, those with high dietary consumption had 19% lower triglycerides and a 13.8% lower levels of C-reactive protein. They also had a 62% lower risk of developing type 2 diabetes. (4)

Omega 7 weight loss reviews have not been clinically evaluated, however the correlation of healthier metabolic profiles seen in human epidemiological studies lends credence to such testimonials. Vaccenic acid gets at least partially converted into conjugated linoleic acid (CLA) in certain mammals.

Supplements and natural sources of CLA have a fairly robust amount of research to suggest they work for losing weight.

With the exception of sea buckthorn and macadamia oil, most natural food sources of omega 7 have a trivial percentage. The benefits may be offset by unhealthy saturated and long chain fatty acids, such as those found in lard and butter.

Based on the two human clinical studies, omega 7 dosages of 220-720 mg daily appear to be well-tolerated without side effects, when used for a period of several weeks. Longer term studies have not been done.

Much larger dosages, relative to body weight, have been used safely in animal studies. 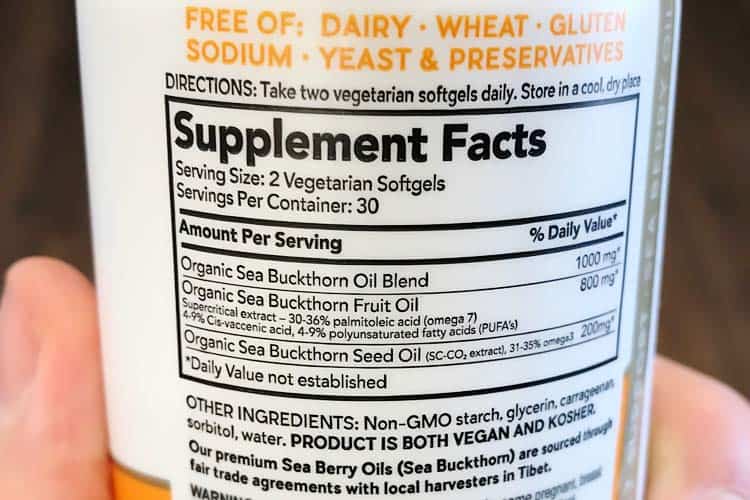 The best omega 7 oil will be that derived from sea buckthorn. On average, the supercritical extract used in capsules will be 30-36% palmitoleic acid, 4.9% Cis-vaccenic acid, and 4-9% polyunsaturated fats (PUFAs). If non-gelatin capsules are used, the advantage of sea buckthorn is that it’s vegetarian/vegan, gluten free, and allergy-friendly concentrated food source. You also won’t have to worry about heavy metal and toxin exposure from ocean fish.

The brands Seabuckwonders and Barlean’s Heart Remedy Softgels are not vegan because they contain gelatin and/or fish oils. 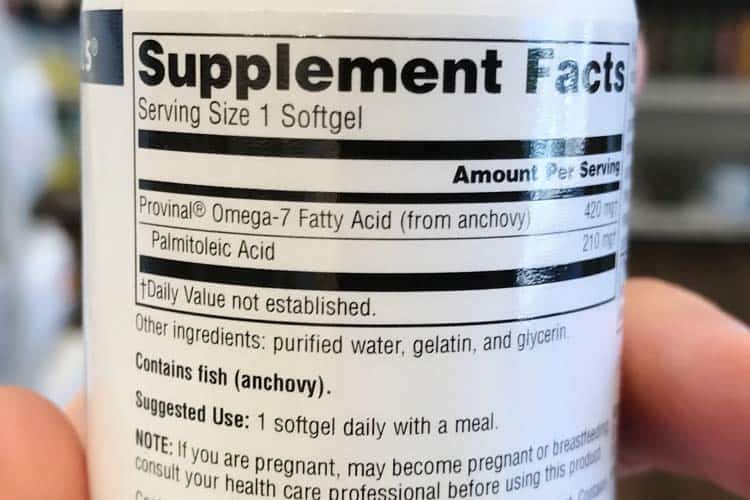 Source Naturals and Life Extension Provinal purified omega 7 is arguably the most trustworthy fish source. This is because Provinal is a branded extraction process developed by Tersus Life Sciences, which is a Florida-based company that does nothing but omega 7. Hence, they specialize in it.

Where to buy omega 7 will be limited to specialty retailers like The Vitamin Shoppe, Whole Foods, and similar. Unlike omega 3 which is sold at CVS, Walmart, and regular grocery stores, the 7 fatty acid has less awareness and hence, less demand. It’s in-store at far fewer places.

On Amazon, you can buy our favorite plant-based brand Sibu, as well as Life Extension’s fish-derived Provinal.