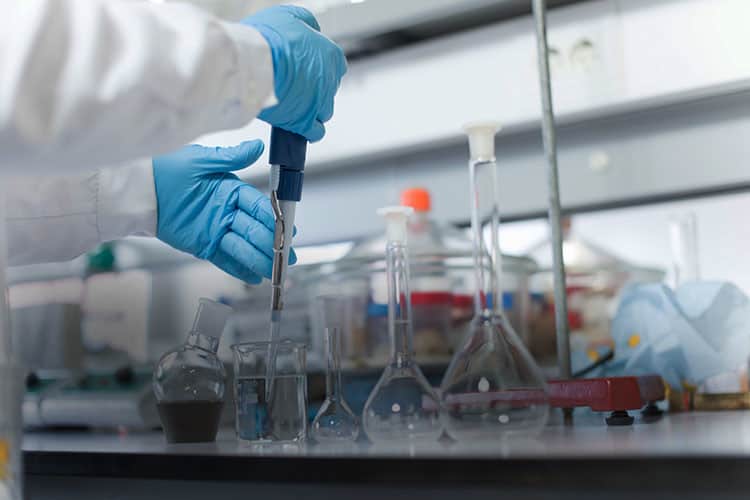 The Next Generation Antioxidants: Most Powerful Supplements

Not too long ago some of us went on Holistic Holiday at Sea, which is a once-per-year, week-long educational cruise about nutritional science. Each day from morning ‘til night were lectures and workshops by some of the most prolific people in the space, such as Dr. T. Colin Campbell of The China Study and Dr. Michael Greger, bestselling author of How Not To Die.

Among the 1,500+ who attended, perhaps the biggest surprise for us was how very few of those people took supplements of any kind (we’re not talking about the speakers, but rather those attending).

Over meals when this topic would get brought up (typically when they saw us taking ours before eating) you would quickly realize that even though they’re well-informed in dietary health, their knowledge of supplements is minimal, at best.

In fact, many if not most were actually hostile against the idea of taking vitamins, minerals, and other supplements. What is the most powerful antioxidant in the world? It didn’t matter to them, they didn’t want to hear this answer. One British guy exclaimed they’re snake oil (and indeed, some are). Their belief was that since they were largely eating a whole foods, plant-based diet, they had no need for any additional antioxidants or other nutrients, since all came from their diet.

The truth is that – if your diet is primarily plant-based using less processed foods – indeed you probably do not need supplementation of vitamins and minerals. That is not what we believe in supplementing for, but rather, the next generation antioxidants which are not a part of any diet.

And yes it is true we don’t “need” to take them, but nor do we “need” to do many things in life, like exercise. Though we would rather do both to have the best health possible, at least to the extent we can influence it.

None of these antioxidants you will find in your food – or – just a trivial amount is present. Among all the thousands of different supplements on the market, we believe the research is strong enough to support taking these, despite the fact that some can be expensive. And we put our money where our mouth is – the pictures below are our actual bottles. This list consists of the 3 most powerful antioxidant supplements you can buy today. 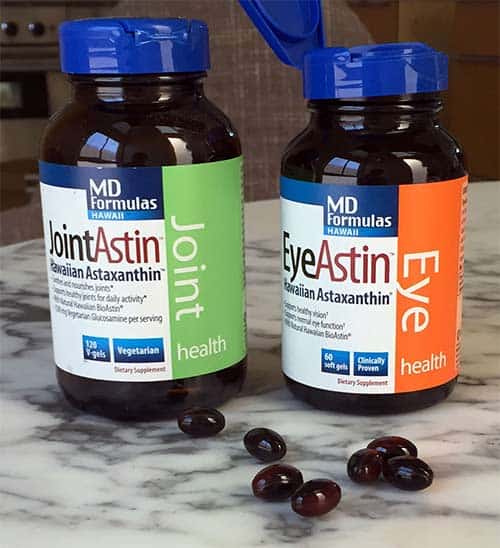 That substance is astaxanthin. If there was only one next generation antioxidant to consider supplementing with, it would likely be this.

But is astaxanthin natural or synthetic? Where does it come from?

This is not some strange concoction cooked up in a laboratory, but rather its found within certain types of sea plants; microalgae. It is one of the most powerful antioxidants found in nature, if not the most (we say “one of” because it’s impossible to know what may be found in the future, even though it’s number one as of 2016).

Obviously, microalgae is not something which is part of the human diet and even if it was, you would need to consume many pounds of it per day to get the same astaxanthin dosage that a single pill can offer (typically 3 to 6 mg worth).

For those who consume fish and seafood, you do get a little from your diet. It’s found in trout, shrimp, and Pacific salmon. In fact, this intensely red carotenoid pigment is what gives those salmon their signature pink color. None of these animals produce it naturally though, as they also obtain it from what they eat; microalgae – which is the same source used by supplement companies.

Although not proven, the health benefits which have been suggested from research on astaxanthin are extensive:

Eyes: Perhaps most prevalent is the research involving astaxanthin and vision health, with research suggesting it may protect retinal cells against oxidative stress and be particularly useful for Age Related Macular Degeneration (2).
Brain: There have been at least 17 studies to date which suggest astaxanthin may help with age-related cognitive decline by protecting the neurons (3). Some of these studies also suggested it may offer benefits for Alzheimer’s and other neurodegenerative conditions (4).

Fitness: Animal studies have suggested it may have a positive effect on endurance and preventing muscle damage after strenuous exercise (5) (6) (7). For this reason, it has started to catch on as being a popular supplement for athletes, bodybuilders, and others who are physically active.

Heart: In a study of rats with high blood pressure (hypertension), positive findings suggested there might be a connection with astaxanthin being beneficial for improving arterial wall thickness and elastin levels (8).

On Amazon this is the brand we buy. 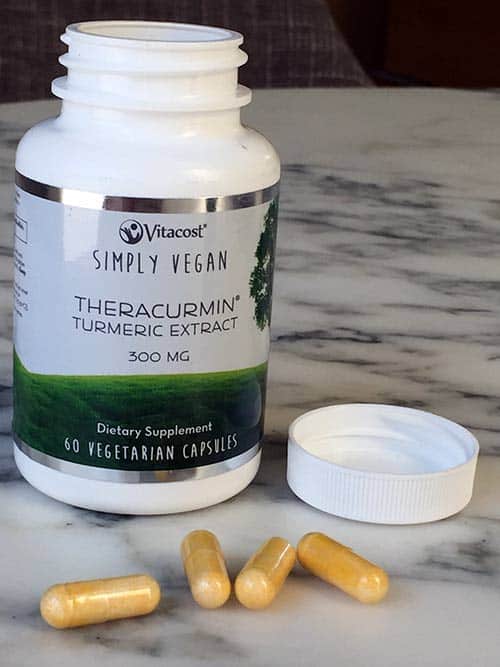 Curcumin isn’t new, it’s the bioactive compound found in turmeric spice. So why do we have these on our list of cutting edge antioxidants?

Because these new patented formulations offer up to thousands of percent more bioavailability in the human body, when compared to older generation curcumin supplements.

There are 3 types of curcuminoids in turmeric: curcumin, desmethoxycurcumin, and bis-desmethoxycurcumin. Research has found the latter two to be inert, but curcumin has proven to be one of the most exciting and therefore most studied antioxidants of all time.

An encyclopedia could be written about the hundreds (or thousands) of clinical studies and the health benefits which they have suggested may result from curcumin. These include inflammation (12), osteoarthritis, heart disease (including the lowering LDL cholesterol and benefiting atherosclerosis), neurodegenerative conditions (much research has been done relating to Alzheimer disease in particular), various gastrointestinal issues (such as ulcerative colitis), antiviral and antibacterial qualities, and also some preliminary findings which suggest there might be anti-cancer aspects offered by curcumin (13).

To be clear, the alleged health benefits of turmeric and curcumin (as well as all other supplements mentioned here) have not been evaluated by the Food and Drug Administration. They are not intended to diagnose, treat, cure, or prevent any disease. They remain unproven.

Within the past few years, these patented, second generation formulations of this potent antioxidant have came on the market. We have a more detailed review of the best curcumin supplements but here are summaries for these two which are our favorites: 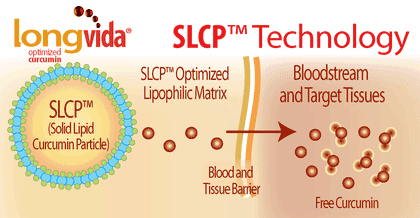 Theracurmin – Developed by a Japanese firm, in a nutshell they’ve developed a formulation which reduces curcumin down to a particle diameter of only 1 μm or less. This leads to dramatically higher levels of bioavailability. More double-blind clinical trials have been conducted for this formulation than any other.

Similar to how Kaneka Corporation licenses their ubiquinol patent (the reduced form of the ubiquinone molecule) to different supplement manufacturers, Longvida and Theracurmin do the same thing. Therefore you will find a handful of brands for each which contain these patented formulations.

This is the Theracurmin brand we buy on Amazon. 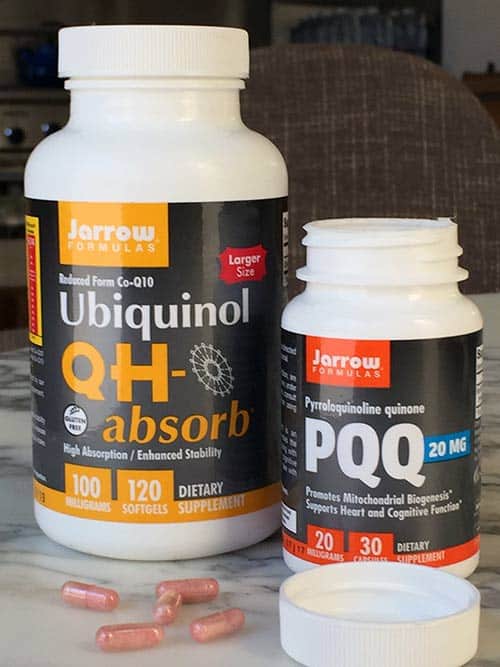 You’ve almost certainly heard of coenzyme Q10, more commonly known as CoQ10 (ubiquinone). This compound is naturally produced by your cells to create energy. In fact, not only is it found within every single one of the estimated 37.2 trillion cells within the human body (9), but all animals too. Our cell’s natural production of it peaks when we are around age 20 and goes downhill from there.

The only reason we don’t have CoQ10 in this list is because we’re focusing on next generation supplements. Considering that Qunol CoQ10 runs national TV commercials, Costco sells the stuff in bulk, and it’s found at practically every CVS and Walgreens, it’s safe to say this is now a mainstream supplement.

The same however cannot be said about PQQ, at least not yet.

Like its close cousin CoQ10, PQQ (Pyrroloquinoline quinone) is a vitamin-like compound. While CoQ10 was discovered in the 1950’s, it wasn’t until much later – 1979 – when a researcher named J.G. Hauge discovered PQQ.

During the last couple decades people have really started to take notice of it. Nature Magazine suggested in 2003 it should be classified as a new vitamin. The Washington Post ran a headline exclaiming “Japanese Find 1st New Vitamin in 55 Years; Experiments Show It Could Affect Fertility” (10). Though to be clear, it has not been classified as a vitamin by the government, at least not yet.

But what is PQQ? It’s often described as having properties similar to B-vitamins. Like CoQ10, it is also active within our mitochondria, which is what produces energy within our cells. The highest concentrations of it are found in the brain, heart, and vital organs. This nutrient has displayed antioxidant and protective benefits.

Is PQQ naturally occurring in food? Like CoQ10 it is, but just in such small amounts – the amounts are measured in nanograms rather than milligrams. One of the highest natural sources of PQQ is actually human breast milk, though it’s safe to assume none of will be supplementing our diets with that!

Research is on-going and still very preliminary. Therefore we shouldn’t draw any conclusions. But there is a wide body of research which suggests PQQ may offer health benefits related to cognitive health, heart health, and more. None are proven, but the evidence so far is compelling. 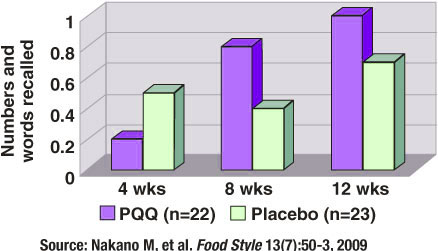 A double-blind and placebo controlled, parallel group study involving 71 healthy adults (29 men and 42) women set out to find if PQQ improved cognitive function as well as fight stress in middle-aged and eldery adults. Tests were administered at 4, 8 and 12 weeks, with the findings being published in 2009 in: Nakano M, et al. Effect of pyrroloquinoline quinone (PQQ) on mental status of middle-aged and elderly persons. 2009;13(7):50-3. (11)  In the words recall test – for short term memory – the PQQ subjects’ ability to recall 7 words immediately after a repeat were impressive versus those on placebo.

In short, the studies so far are promising enough that we are “hedging our bets” by taking PQQ supplements today, with the expectation that future research will validate and conclusively prove its powerful effects. It is very expensive though, so this is a once-per-day pill for us, versus ubiquinol (CoQ10) which we take with every meal.

This PQQ on Amazon is a good value and what we have bought.