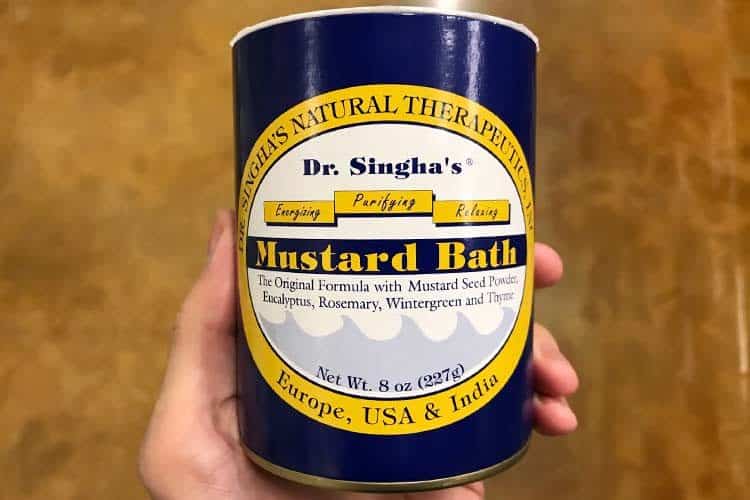 Review: Mustard Bath Recipes Don’t Detox, But They Do This

No, we are not talking about the street drug of the same name. Using real bath salts for soaking in the tub after a long day is as popular now as it was hundreds of years ago.

Therapeutic soaking baths date back to the Biblical days, though the “new” recipe of using Epsom salt has been around since the 17th century.

That’s when a certain mineral salt containing magnesium, sulfur and oxygen (MgSO4) was discovered, in the town of Epsom, which is south of London.

A local cattleman saw some water bubbling up from the ground and was perplexed as to why his cows wouldn’t drink it. Lo and behold, it was because the water was loaded with what is now known as Epsom salt or epsomite.

Bathing aside, it has been for hundreds of years in medicine. You will find it listed, as magnesium sulfate, in the on the World Health Organization’s List of Essential Medicines. It’s used for seizures, constipation, severe asthma, barium poisoning, and more. (1)

While Epsom is the most known, there is another type that also has a history in medicine. Mustard plaster and baths were popular up ‘til the 20th century.

Today, mustard bath detox benefits are touted by home remedy enthusiasts. However, the history of using them was for other purposes; restoring skin circulation, treating pain such as achy muscles, and alleviating the symptoms of colds and fevers. This mostly took place before the advent of antibiotics and antivirals, when the focus was on treating the symptoms of bacterial infections and viruses like the flu.

Using it to the rid the body of toxins or poisons is a new fad that’s not backed by science or even the historical uses. It’s similar to the claims being made about apple cider vinegar, which does offer many other health benefits, though evidence for detoxification is one that’s lacking.

To give you an idea of how it was used back in the day, let’s gander at an old issue of The Lancet, where they talk about how to make a mustard bath for people who were on death’s bed. 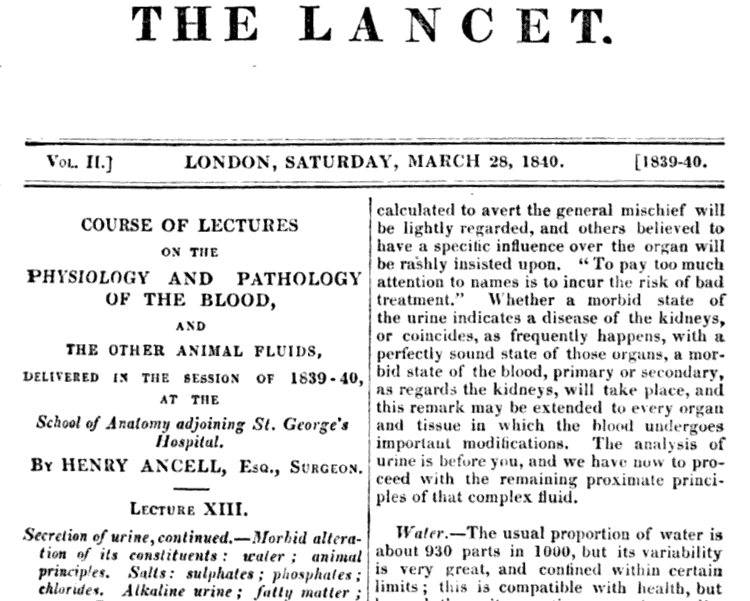 The issue is from 1840. Yes, this prestigious medical journal has been around for a very long time!

Turning to page 239, where hear of it used on two people, reportedly with success. Here’s the story for one:

“The servant-girl, a strong, country wench twenty-three years of age, became in imminent danger; her pulse was frequent, small, and irregular; so much so, indeed, that one practitioner in attendance suspected this condition of the circulation could only be the result of cardiac disease; he (Dr. Clutterbuck), however, thought the brain to be chiefly at fault, particularly as the girl, previous to the occurrence of the fever, had been in good health. In addition to this condition, the surface was pale and cold, and there was great depression. The mustard-bath was used, the action of the skin was restored, sweating was induced, and the patient recovered.”

What they say next about it makes clear that this is not a pleasurable or preferred treatment:

“The mustard bath was a remedy which he should never think of using, except for the purpose of obviating the most urgent symptoms.”

Why should he never even think of using it? This write-up in The Lancet doesn’t explain. We have to turn to other old literature for the answer.

An issue of The Indian Medical Gazette from 1932 tells us what a mustard bath does to your body. The side effects are described:

“The primary action of mustard oil upon the skin is to cause dilation of the capillaries, yielding a sense of warmth and a ‘tingling’ sensation, pleasant at first, but rapidly becoming unbearable. A red flush is seen at the site of the application, followed eventually by a wheal, similar to that produced by a burn.”

Though it’s clear that they used lower concentrations for less serious ailments:

“The mustard bath or mustard foot bath causes a sensation of warmth which not only is pleasant and soothing to the patient’s feelings, but provides the body with optimum conditions demanded for combating the invading organisms.”

They go on to say the main purpose of it was for when the doctor wanted the patient to sweat profusely, such as for the common cold. In those applications, it sounds like the dosages were less intense:

“The treatment suggested for an oncoming cold, or a sensation of chill, will therefore be as follows. A hot mustard bath should be taken, containing 1 ounce of mustard per gallon of water.”

That sounds much milder than the “baths” for the severely sick, which were more of a mustard plaster recipe.

Today when you hear of people using this spice in the bathtub, in lieu of Epsom salt, their reviews never mention burns or other “unbearable” sensations. Dr. Singha’s mustard bath certainly would not be so popular if that were the case!

Aside from a lower concentration, the other difference is that the species of plant used in the 19th and 20th century for medical treatments is not the same.

“It is generally asserted that all of the physiological effects of mustard are due to the presence of the volatile oil contained in black mustard seeds, and liberated when they are moistened with water. This statement is no doubt true in its essential, but since practically no work has been carried out on the non-volatile oil of white mustard…”

Black mustard (Brassica nigra) is not even closely related to white mustard (Sinapis alba), which is the type used for everything from French’s Classic Yellow to a fancy imported Dijon. It’s also used in baths. (2)

How to make a mustard bath 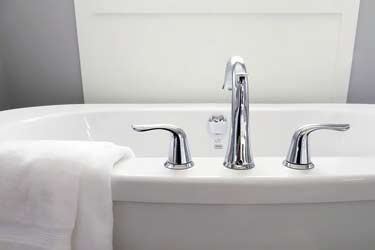 If you want an exotic alternative to Epsom salt, try Dr. Singha’s.

That’s the most popular brand, or more accurately the only brand, that sells a solution today based on this seed. This is what’s inside…

The original recipes only used mustard and maybe some salt. Singha’s has essential oils added.

Sodium carbonate is a type of salt that is frequently used in industrial applications, green cleaning solutions, and natural personal hygiene products. “Washing soda” is another name for it.

For over 40 years this product has been sold by Dr. Shyam Singha, who is an Ayurvedic physician. He is also the author of The Secrets of Natural Health.

The container claims “therapeutic essential oils leave your skin feeling soothed and refreshed.” As far as the main ingredient, he claims:

“The hot alkaline water together with the mustard assists the largest organ of elimination, the skin, to release impurities.”

That benefit is debatable or at least not proven. Yes, it may make you sweat a bit, though to make the leap and say that impurities are coming out of your skin is a stretch. Like we said, no claims of detoxing have been scientifically scrutinized, so they remain theoretical.

Using products like these for sore feet, muscles, and back pain does seem to help many, according to reviews. However, using it for the stomach flu or periods are more fables not found in science. If bathing helps those, it’s probably more of a placebo side effect.

What is a scientific fact is that many of these ingredients are chock full of antioxidants.

Here are the essential oil ORAC values for those types listed in the ingredients of the bath:

With the exception of rosemary and the E. Globulus species of eucalyptus, those values are quite high. To give some perspective, the same weight of powdered acai (100g) is nearly tied with the wintergreen oil, an ORAC of 102,700 vs. 101,800.

As far as the starring ingredient – ground yellow mustard seed – its ORAC is way up there too at 29,257.

Of course soaking in these ingredients is different than eating them, so the antioxidant content isn’t as relevant. Still though, it’s nice to know that whether you’re using the mustard bath on your feet or soaking your entire body, it’s an antioxidant-rich solution that’s touching your skin.

To make a bath, the instructions are:

For a foot bath, dissolve 1 large tbsp of the formula in a bowl of hot water. Soak for 20 minutes. Finish with a short cold soak.

For a full bath, add 2 oz. to a hot bath (keep it hot). Relax in it for 20 minutes. Finish with a cold shower, dry with a rough towel, rest and keep warm for best results.

Where can I buy Dr. Singha mustard bath?

Stores which offer a wide selection of hard-to-find supplements will be your best bet. Not many independent stores like that exist today, though some co-op grocers fit the bill. Among the chain retailers, Whole Foods carries Dr. Singha at some locations.

On Amazon, you can get a big 28 ounce container which is a good value.

These statements have not been evaluated by the Food and Drug Administration. This product is not intended to diagnose, treat, cure, or prevent any disease.
522
SHARES
FacebookTwitter