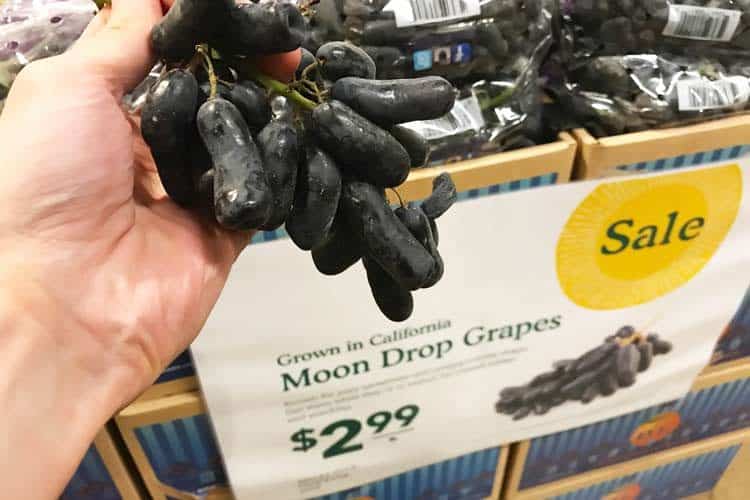 What Are Moon Drop Grapes? Not What You Think

Back in 2017 the Arctic apple hit the market, which is an apple that has been genetically engineered to not turn brown.

Not too long before that, there was a new grape that hit the shelves of select supermarkets. This variety and the green-colored “Cotton Candy” variety.

You don’t need to know their names to know there’s something different about them. Their specially packaged and in the case of the Moons, they look like tubes!

What are moon grapes?

Sometimes just called moon grapes, their official name is Moon Drop and it’s trademarked by Grapery, a California-based grower. They come from a version of the common grape vine species (Vitis vinifera) that has been selectively bred to produce an intensely sweet and crisp seedless fruit, which grows in a tubular shape. 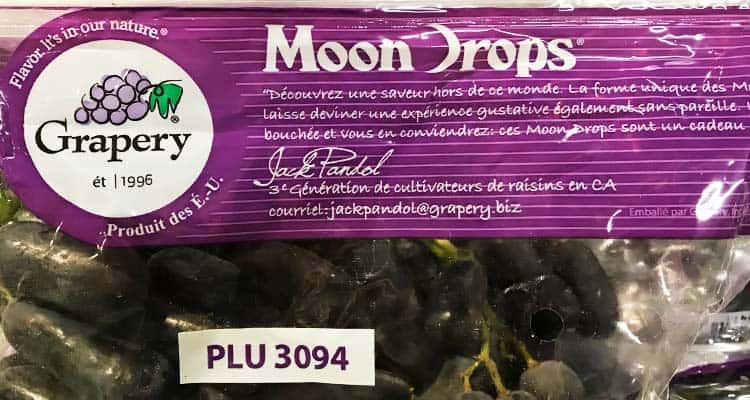 Jack Pandol Jr. is a co-founder of the Grapery and International Fruit Genetics (IFG). These are the companies which have brought this and other new trademarked varieties to market including Cotton Candy, Gum Drops, Tear Drops, Flavor Pops, and Flavor Promise.

If you look up International Fruit Genetics, LLC on Google Patents, you will get 22 results!

Filed in 2011, they call it “Grapevine ‘IFG Six” and it’s not Jack Pandol, but rather a man named David Cain who’s listed as the inventor on the patent filing. (1)

If you’re curious, Cotton Candy is identified in another filing as IFG Seven.

The website of International Fruit Genetics describes David Cain as “is in charge of all fruit breeding for our rapidly expanding company.”

Since this is a trademarked name for a patented fruit, one might assume that Moon Drops must be a GMO plant. They’re not. These were created using Dr. David Cain’s selective breeding techniques. Hand pollination of the Beita Mouni and C22-121 grape varieties are what led to the IFG Six, more commonly known as moon grapes.

These are “natural” in the sense that there was no genetic modification that ever took place. The breeding techniques though did require human intervention to occur.

Known as “embryo rescue” it involves pollinating a flower and then growing the immature seed in a laboratory test tube. Eventually, the seedling is transplanted to regular soil and grown in the traditional manner.

While the initial growing process may be unnatural, the plants and fruits that result from it are 100% natural and non-GMO.

Moon Drop grapes taste like a regular black seedless, only better. The flavor is sweeter and the texture is more crisp. When you bite into one it’s not mushy, but rather the skin “snaps” like that of a freshly-picked fruit. Since they’re elongated, you can even break them in half with your fingers.

While there’s nothing preventing you from making jelly, jam, or wine using them, the resulting flavor might be a disaster.

Using Cotton Candy grapes, which is probably the most variety from this grower, Bon Appétit reported that wine made using them was “So bad. It tastes nothing like Cotton Candy. It’s flat, flabby, no acidity structure.”

The lesson? Enjoy them fresh and raw!

The Grapery, who is the exclusive seller of this variety, doesn’t provide a nutrition facts label nor are they required to since it’s produce. Most likely, Moon Drops grapes’ nutrition is comparable to standard black seedless. Per 1 cup (92g) that’s 62 calories, 0g of fat, 15g of sugar, 1g of protein, and 1g of fiber. (2)

As far as the expected vitamins and mineral content…

We haven’t heard of side effects of Moon Drop, Cotton Candy, or their other varieties. The only drawback is that you can’t get them organically grown. The FAQ on the Grapery’s website states (3):

“One of these modern practices is the careful use of crop protection. Like most growers around the world, we use as few of these interventions as possible. More than that, through years of rigorous experimentation we have developed numerous techniques to add nutritional complexity and nurture the perfect soil biology to strengthen and sustain our vines. Organic or not, safety should always come first. We specifically test all of our fruit for residues before we harvest them.”

Although this type hasn’t been measured, the glycemic index (GI) for a 120g serving size of grapes has measured as being 43 to 59. For diabetics and those desiring more stable blood sugar, this is reasonable assuming your portion size is small. (4) (5)

According to data from the Specialty Produce app, when in-season the Moon Drop grape can be found for sale from coast to coast; CA, IL, NY, MS, OH, VA, and WA just to name a few states. Whole Foods, Meijers, Kroger, Albertsons, Ralphs, Wegman’s, and Sam’s Club are all stores where they have been spotted.

In Toronto, Canada they were seen at Michael-Angelo’s Marketplace in Mississauga. Elsewhere, such as in the United Kingdom and Australia, they’re not yet sold.

Their cost can vary greatly based on location. We heard from someone in Akron, Ohio who got them for $1.50/lb. Here in Los Angeles they were $2.99. Two drastically different prices in the very same week!

If you spot them, snap ’em up while you can.

The growing season for Moon Drops is extremely short. They’re only sold at stores from August 20th to September 15th. That’s less than one month out of the year you can eat them.

Grapery’s most popular variety, Cotton Candy, follows a similar time frame, as do their other bestsellers.

Since these are non-GMO grapes grown in California, you have late summer through the fall season to enjoy them.

Okay, if the supply is so limited and you have a green thumb, perhaps you’re thinking you should put a bare-root vine in your backyard.

Do you live in a climate with a greater growing season? Or maybe you’re a Brit in the UK with a greenhouse?

Sorry, neither scenario will work.

In fact, no scenario will.

The company which owns Moon Drop and Cotton Candy grapes don’t offer their vine cuttings or plants for sale. Since they’re patented and not sold to anyone, it means there’s no possible way for you to grow them yourself. At least until their patents expire in 2031.

Even then, since they’re seedless you can’t just plant one in the ground. Until they sell the actual plant/vine clipping, your only option is the grocery store!