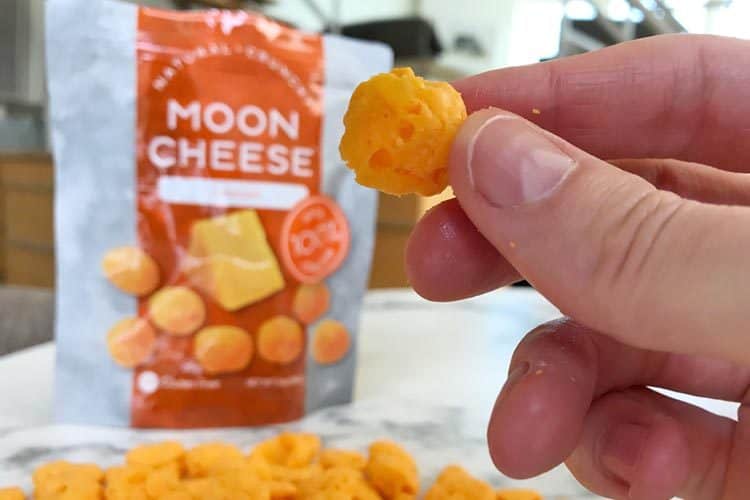 What Is Moon Cheese and Is It Healthy?

Starbucks was among the first to sell these. It started with about half their US locations, back in 2015.

Due to popularity, Starbucks eventually rolled out this dried cheese snack to all 7,500 US and 1,400 Canadian corporate-owned stores.

In 2017, the cheddar and pepper jack Moon Cheese show up at 70 Costco stores throughout the Midwest. They expanded the launch to their Northwest stores in 2018.

These days you can buy Moon Cheese at many locations of CVS, Rite Aid, Target, Wegmans, Whole Foods, and Piggly Wiggly. It’s getting increasingly easy to find for sale. Should you be buying it?

What is Moon Cheese?

Moon Cheese is a brand name for a shelf-stable dried cheese product which doesn’t need refrigeration. How it’s made involves a patented process called Radiant Energy Vacuum (REV). In short, regular cheese made from pasteurized milk is put through a vacuum chamber, which dries it using microwaves.

It is vegetarian but not vegan, since it’s made with real cheese. That also means it’s not suitable for those with milk allergies. It is gluten free, nut free, and soy free. 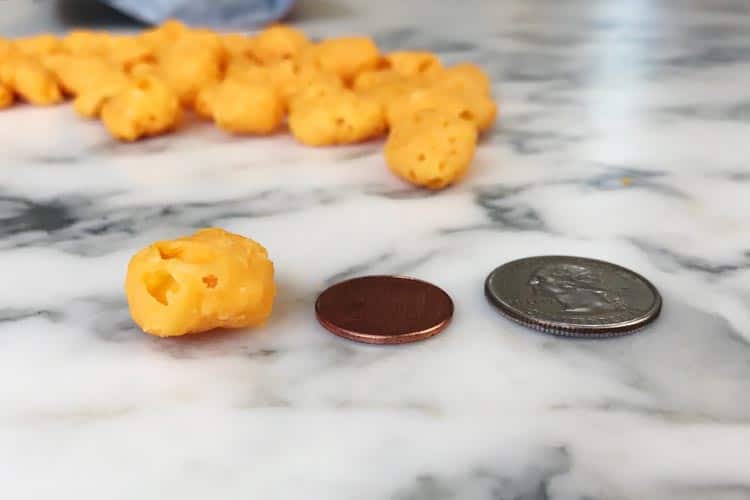 Despite the moon moniker, there’s no evidence to suggest its being used by NASA, or for space food in any regard.

The REV process used to make Moon Cheese is owned by EnWave Corporation. Founded in 1999, this Vancouver based industrial technology company uses their microwave vacuum system for foods and pharmaceuticals.

When they decided to start using it on dairy products is apparently around 2010, according to the priority date listed on their earliest filing with the US patent office. (1) 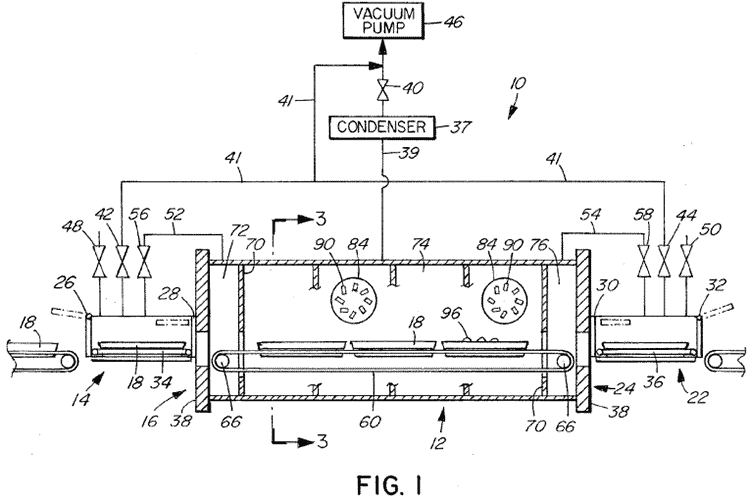 By organic, they’re not talking about pesticide-free and that type of stuff. Rather, they’re referencing the biological meaning; living or dead plant/animal material. In other words, food.

Moon Cheese is not organic. They use regular pasteurized milk.

On the product packaging, you will see the manufacturer listed as NutraDried Creations LLP. In 2018 that company became fully owned by EnWave. Prior to that, they had a 51% controlling interest. (3) 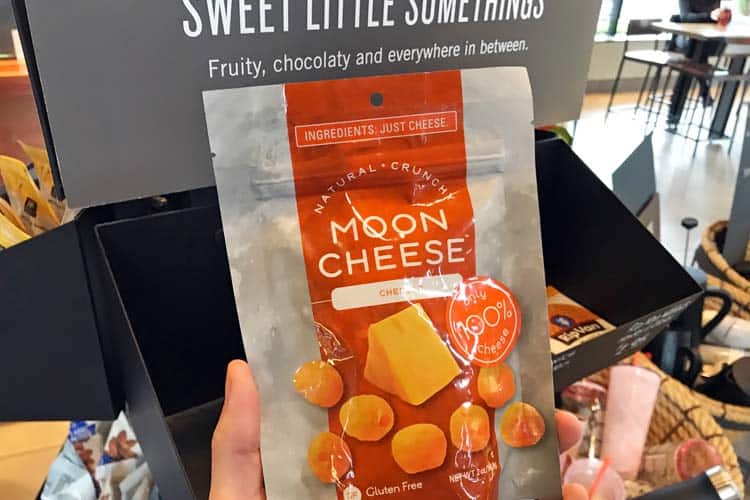 We snapped this photo while waiting in-line at a Starbucks in Los Angeles (Culver City, to be exact)

Cheddar, Gouda, pepper jack, mozzarella, and sriracha are the Moon Cheese flavors available for sale. With the exception of Mozzarella which comes in a 1.75 oz bag, the others are 2 oz bags. The front of the packaging for each flavor proudly proclaims the ingredients are “just cheese.”

Moon Cheese has the taste of real cheese, but with the crunch and texture of a cracker. While there’s almost zero water moisture in the cheese, natural fats in it still create a smooth oily sensation on the tongue. The curds will also leave your fingers greasy.

Based on reviews for the cheddar and pepper jack, most people tend to agree those are best tasting flavors of Moon Cheese. Opinions of Gouda are less favorable. Mozzarella tends to get the lowest rating, because its taste is too subtle.

How do you eat it?

Similar to popcorn and potato chips, Moon Cheese is marketed as a shelf-stable snack that can be eaten at home or on the go. No prep is needed, as you can just eat them right out of the bag, like any other finger food.

It’s probably best suited for consumption on its own.

If you tried adding it to recipes, the strange texture may be too much of a distraction. Plus, if you cooked it with anything that add moisture, then that would defy the point – the cheese would rehydrate. That would just be like paying for expensive camp food! 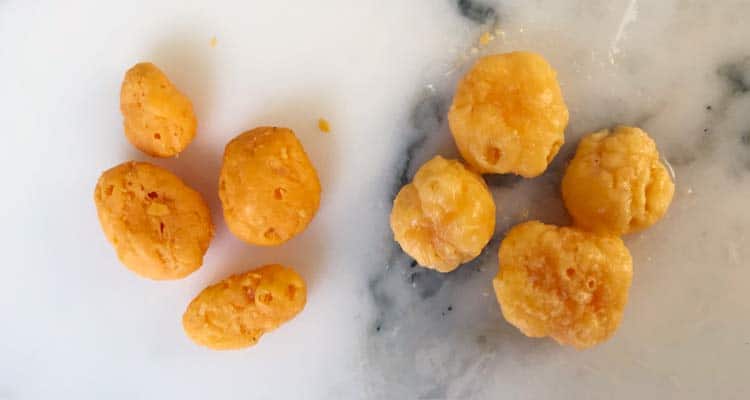 Normal on the left. The right are what the curds looked like after soaking in water for a couple hours. Slimy and gooey, not appetizing!

According to the USDA, the average cheddar cheese is 37% moisture. Since Moon Cheese has this water content removed, the nutrients are more dense when compared on an equal weight basis. Aside from that difference, the percentages and ratios for calories, carbs, and protein will be the same as regular cheese. Calcium content will also be comparable. (4) 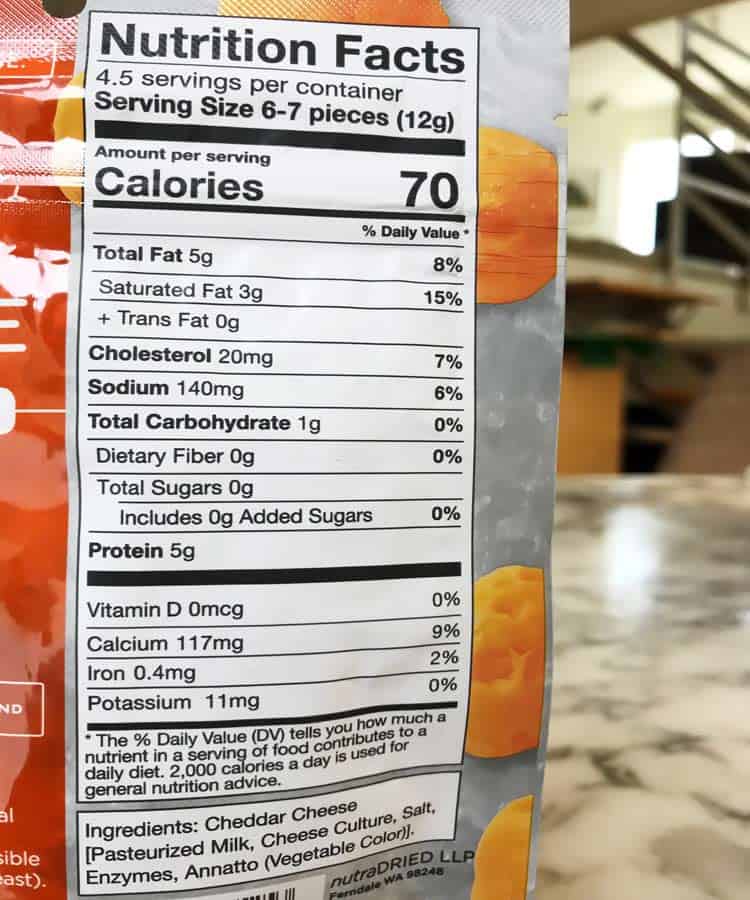 In comparison, the same 2 oz weight of normal cheddar with its water still intact would be 228 calories. In other words, Moon Cheese is almost 40% higher in calories by weight. The math for pepper jack, mozzarella, and Gouda is similar.

When compared to normal cheese, there is only one aspect of Moon Cheese which is not good for you. With the water weight removed, you are consuming a more calorically-dense food. In moderation and with self-control this is not a problem. However those of us prone to eating an entire bag of potato chips, or other salty and savory snack, may find ourselves consuming more calories than we realize or intended. 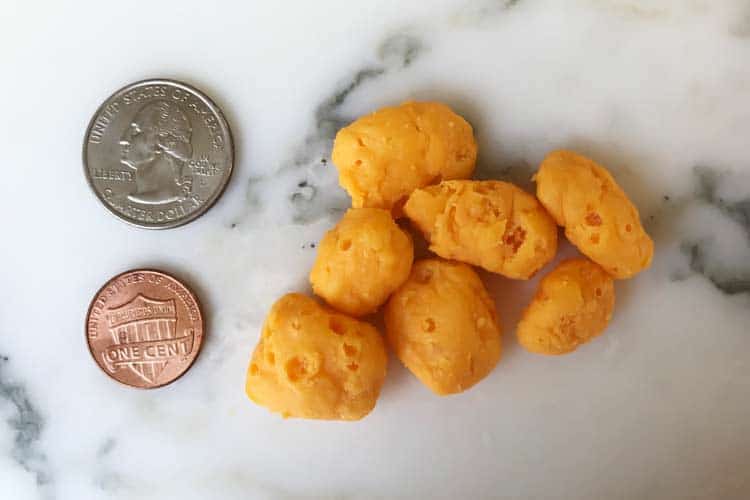 The cheddar Moon Cheese is 70 calories per 12g, which equates to 6-7 pieces. That’s about 9% more calories than the same weight of Lay’s potato chips, which are 64 calories. (5)

One could argue the comparably high calorie count of Moon Cheese is partially offset by the benefit of being low carb and high protein, like normal cheese is.

That’s true and many would say Moon Cheese is healthier than filling up on high-carb snacks, like chips and popcorn.

While Moon Cheese is keto friendly and suitable for low carb diets, what’s bad about this food is the high amount of cholesterol and saturated fat it contains.

A single 2 oz. bag of the cheddar flavor contains 90 mg of cholesterol, which is about half of the 200 mg per day max which is recommended for people at risk of cardiovascular disease by the American Heart Association. (6)

As with most other animal fats, those found in cheese are high in the saturated form. One bag of Moon Cheese contains nearly 70% of the recommended daily allowance.

If you’re not on a plant-based diet, even with the potential disadvantages, this unique novelty is at least worth trying once. Plus, it’s probably better for kids (and you) than Goldfish crackers!

Can’t decide on a flavor? Get the 4-flavor variety pack on Amazon which includes cheddar, pepperjack, gouda, and mozzarella.