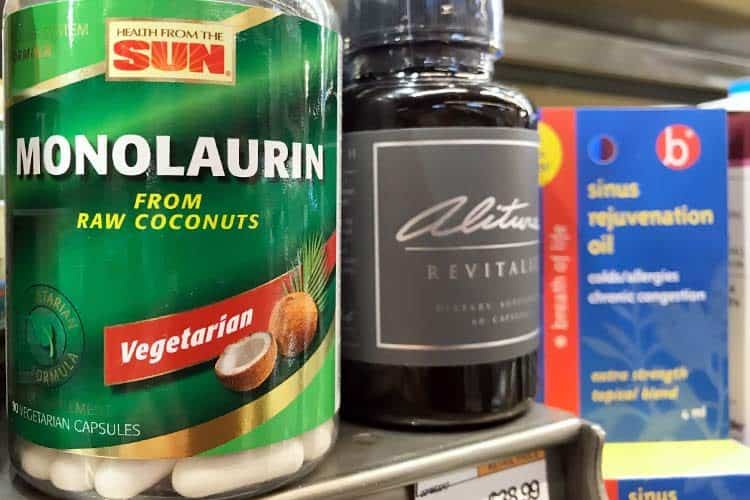 Are Monolaurin Supplement Benefits For Real?

You hear some refer to coconut butter and oil as a natural antibiotic. Not in the literal sense of it being like a medicine (it’s not) but rather because of the preliminary research about it; antibacterial, antiviral, and antifungal effects have been seen.

In a study using mice infected with Propionibacterium acnes bacteria, the capric acid and lauric acid found in coconut were found to inhibit the growth. (1)

In a small double-blind study of 26 people with dermatitis, after 4 weeks of topically applying the oil, it was found to kill off the skin’s Staphylococcus aureus bacteria in 95% of patients. In the group treated with olive oil, the kill rate was only 50%. (2)

It’s studies like these which suggest something in coconut acts as an antimicrobial, but what it is?

Many believe it’s that monolaurin is largely responsible.

Monolaurin is the combination of lauric acid and glycerin. While coconut oil is up to 42% lauric acid, only trace amounts of that are in the form of monolaurin. It’s used to lower surface tension in cosmetics, as an emulsifier in food, and as a dietary supplement.

Filtering monolaurin from coconut fat would be near impossible, which is why it’s manufactured by combining pure lauric acid with a plant-based glycerin. That’s what Lauricidin supplements are made from.

Monolaurin is the same as Lauricidin, for the most part, as the latter is a 95% pure form of the molecule. Lauricidin is the best supplement in terms of awareness, though other brands are starting to launch capsules, powders, and pellets that also have a high purity.

You can obtain monolaurin by eating food sources; coconut oil, butter, and pulp. While not in dairy milk from cows, breast milk from humans does contain some. (3)

The amounts found in food are trivial, as they only represent a fraction of the overall fat content (lauric acid and monolaurin are both types of fat).

Other names for it include glyceryl laurate and glycerol monolaurate.

What is monolaurin used for?

The following uses are not proven and it should not be used to diagnose, treat, cure, or prevent any disease. These are merely topics you will hear discussed online in relation to the molecule, as some people purport it might be useful for them.

With few exceptions, most of the purported uses and theories focus on immunity.

Only a few of the items on this list have been studied in the lab and almost none have human research to support them.

So what’s fact vs. hype? Here’s a review of the only three human clinical trials that have been published to date.

Toxic shock syndrome (TSS) is due to toxins produced by Staphylococcus aureus bacteria. Side effects of fever, low systolic blood pressure, skin peeling (desquamation), vomiting, diarrhea, and worse can occur. In severe cases, there can be kidney failure and other life-threatening reactions.

Historically, absorbent tampons have been a major cause, which is why those were taken off the market in the 1980’s. Still, even regular tampons today pose a risk for the development of bacteria infections from menstruation.

In this human study done by the University of Minnesota Medical School, they wanted measure how treating tampons with a monolaurin dosage might help reduce bacteria. (4)

Harmful staphylococcal exotoxins were almost 80% lower in the tampons treated with monolaurin.

Also done by the University of Minnesota Medical School, this study looked at bacterial vaginosis (BV) and vulvovaginal candidiasis (VVC). (5)

The following charts appeared in the study, too. They show the effects measured in the lab (in vitro) when bacteria cultures were incubated over a 24 hour period in the presence of different monolaurin concentrations. 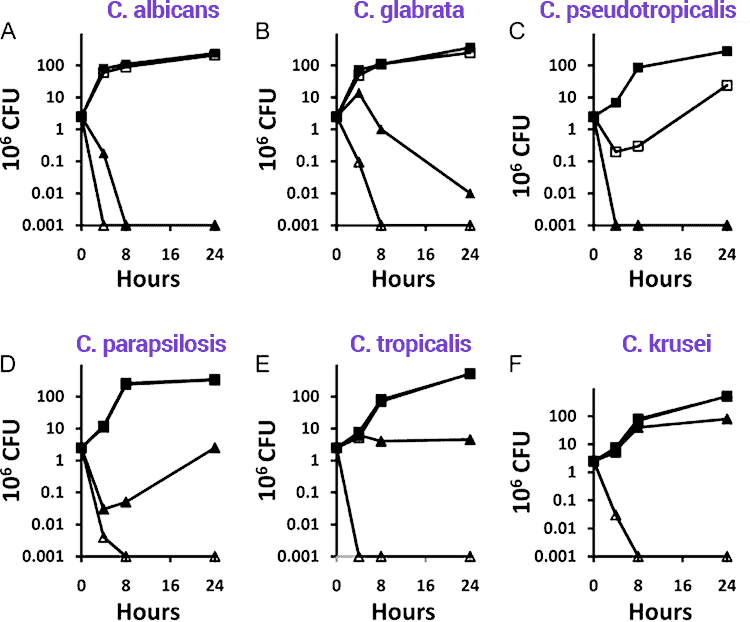 These are associated with various infections of the body, though none are related to fingernail or toenail fungus.

Helicobacter pylori (H. pylori) is a type of bacteria commonly associated with stomach infections. Many cases of peptic ulcers are actually caused by it since it attacks the stomach lining.

This study was done in China, at Beijing University First Hospital. It was registered on the U.S. government’s website ClinicalTrials.gov. (6) (7)

While it helped with the stomach colonies, the drugs used and basic teeth cleaning didn’t seem to reduce the oral colonies of the bacteria. However when the mouthwash was used, there was a 72.58% effectiveness rate at getting rid of the H. pylori in the mouth and oral cavity.

While the stomach and mouth infections may seem unrelated, the researchers found a correlation between the two. In a nutshell, getting rid of it in the mouth was an important predictor in whether medications to treat the stomach infection would work.

As the researchers point out, these findings are potentially useful considering that:

The data suggests that monolaurin usage is very safe, even for long term topical applications. No side effects have been reported in the human clinical trials. While not an endorsement of it working, it is generally recognized as safe by the FDA for topical uses. (8)

The amounts naturally present in foods, such as coconut oil, are believed to be safe. There may be side effects of monolaurin supplements since those are a concentrated source.

According to the Lauricidin brand of monolaurin supplements, if a person takes too much, the following side effects may occur:

These are said to be a “mild and temporary” response and any serious symptoms, such as cardiac or breathing abnormalities, should be given immediate medical attention.

Coconut is a tree nut and poses an food allergy risk. The manufacturer of Lauridin claims that since their supplement is the purified lipid (fat) extract from coconut oil, it can safely be consumed by those with a coconut allergy. Other supplements may be less pure. Regardless of brand, you should consult your doctor prior to using if you have a coconut allergy.

Drug interactions with monolaurin supplements have not been reported, though it’s possible they may exist and have yet to be discovered.

The amount of monolaurin in food is believed to be safe during pregnancy and breastfeeding. Higher dosages, such as those found in supplements, have not been studied during those circumstances. To be safe, it would be best for pregnant women and those who are breastfeeding their babies to avoid use.

That’s unknown. As with most antibacterial substances, it most likely does. This is not necessarily a bad thing, because the benefit of killing the bad bacteria may outweigh the drawback of some probiotics being destroyed. With some digestive disorders like SIBO and IBS, they are exasperated by having too much of the good gut bacteria – e.g. it being too high up in the digestive tract or there being too much in the wrong locations.

Evidence that it might kill herpes and other viruses is limited to lab research and only the following have been studied:

Nowhere do you find research suggesting monolaurin benefits for colds, the flu, Lyme disease, shingles, and the many other things people are blogging about.

It’s important to point out that most of the above virus studies only looked at their potential to stop the replication/spread of viruses. For example, using glycerol monolaurate in nanofibers to see if they had any effectiveness against HIV from sperm. Potential uses like that are quite different than a treatment for an actual viral infection.

Efficacy questions aside, the good news is that it’s a medium-chain fatty acid (a form of MCT oil). Those are arguably the healthiest type for you, since they are digested rapidly and provide energy without a blood sugar spike like carbs do. Research suggests medium chain fats are good for weight loss and athletes. (14) (15)

With only 3 human clinical trials published to date and all of them involving topical uses (skin, vagina, mouth) it’s premature to know whether supplements have an antibacterial, antiviral, or antifungal effect after digestion. There is preliminary evidence that it works when topically applied. Further studies are needed though to confirm this.

Since it’s not proven for any disease or health condition, it should only be taken as a dietary supplement.

How much monolaurin should I take?

Whether you are taking monolaurin pellets or capsules extracted from coconut oil, like Lauricidin, it’s best to start with a small dose.

Those recommendations are according to Lauricidin. Directions from other manufacturers and forms will differ.

For monolaurin capsules, the supplement facts label instructs a serving size of 2 capsules. That provides 990 mg of coconut monolaurin per dose. This recommendation comes from the brand Health From The Sun and what they report on their bottle: 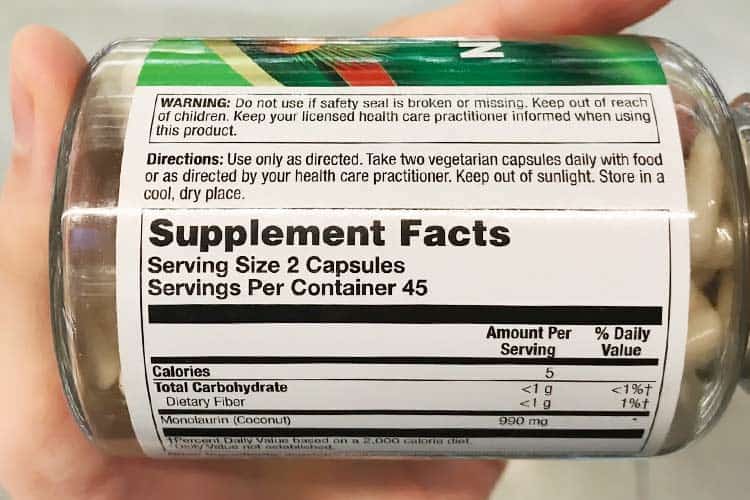 Capsules from Solaray, Monolaurin-Avail, Ecological Formulas, Nutricology, Natural Cure, and CompliMed have similar dosing instructions on their bottles. Most are 990 mg per 2 capsule dose, though some are lower at 600 and 300 mg. Each brand is silent as to whether these amounts should be taken once per day or in greater frequency. Consult your doctor prior to use.

Unlike CoQ10 and omega 3, this is not the type of supplement you’re likely to find for sale at a Walmart, Walgreens, or CVS. It’s still a relatively new compound that the public is mostly unaware of.

Even at a store like The Vitamin Shoppe, you may only find one brand in-stock. We checked with a location in Manhattan Beach, California (within Los Angeles) and what was available was 2 bottles of Health From The Sun monolaurin 1110 mg veggie caps. The brands Solaray and Cardiovascular Research Ecological Formulas were available through their website only.

Med-Chem Laboratories manufactures Lauricidin supplements and they are sold through health and wellness professionals (e.g. naturapathic and medical doctors). In addition to the US, there are practices in Canada, United Kingdom, Australia, and many other countries who sell it. Wherever you live, you can probably get it on Amazon.

In South Africa, Sabinsa is a large distributor of monolaurin. It actually seems to be more popular there than in US.