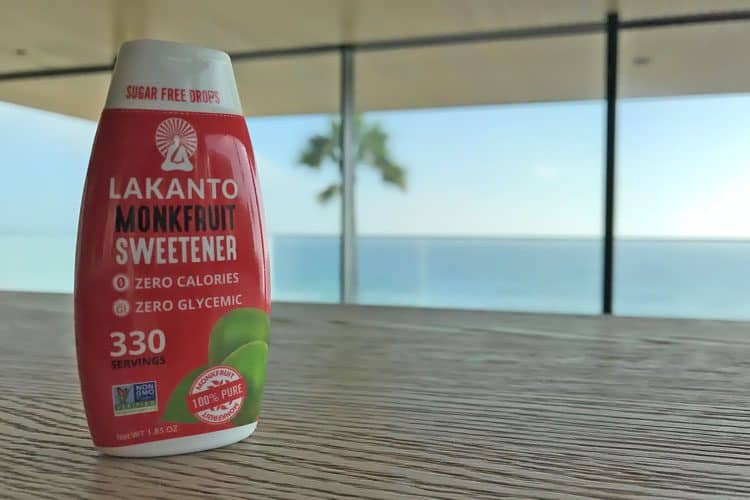 Monk Fruit Side Effects & Safety: Why It Can Be Bad For You

With the exception of its bitter aftertaste, stevia seemed like the perfect replacement for artificial sweeteners.

The widespread availability occurred just within the past two decades. Dieters delighted in zero calories. Diabetics in the lack of glycemic response.

Compared to sucralose (Splenda) and aspartame (NutraSweet), stevia seemed like the natural way to go. Unlike natural sugar alcohols, there’s no gas or bloating.

But is there a dark side?

While the stevia leaf in and of itself is safe, since 1985 it’s been known that when rodents eat it, the digestion of stevia creates a “highly mutagenic” compound.

Surprisingly, it wasn’t until 2016 when a study was published involving actual living humans.

Upon testing 10 men who were fed stevia, they found:

“Peak concentrations of steviol [the mutagenic substance created during digestion] were similar in rats and humans, while steviol glucuronide concentrations were significantly higher in humans.”

All cancers are the result of a DNA mutation. However, not all DNA mutations cause cancer.

Regardless, DNA mutations are never good for you. They can only be bad for you.

This is why known mutagens (mutagenic substances) are so concerning in your diet.

So what about monk fruit extract? Does that have the same adverse effect? 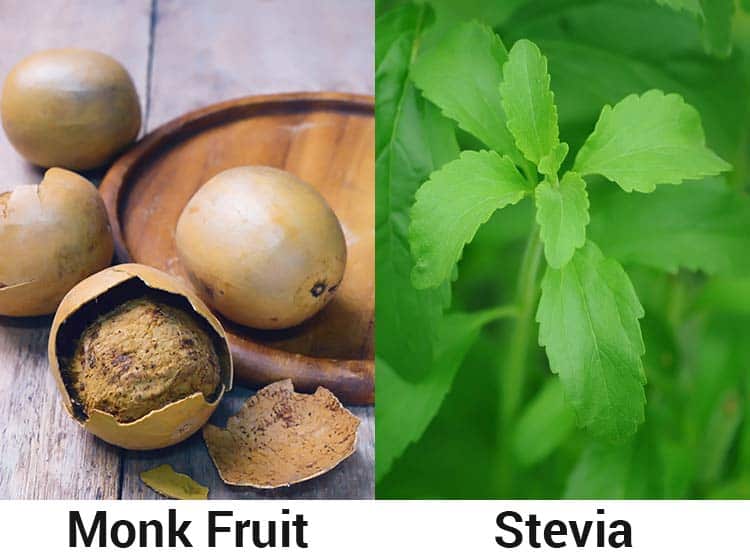 The scientific name for monk fruit is Siraitia grosvenorii. It’s a member of the Cucurbitaceae (gourd) family and is native to southern China and Thailand.

For stevia, its Stevia rebaudiana. It’s an herb that’s native to South America.

As with stevia leaves, only a tiny portion of the monk fruit is responsible for producing the sweet taste on the human tongue. With stevia, it’s the stevioside and rebaudioside. With monk fruit, it’s primarily the mogroside V molecule. When isolated, these molecules are estimated to have up to 300 times the sweetness of table sugar.

Chinese monks have been eating the small melon since at least the 13th century AD. Hence, its English name. The Chinese name, luo han guo, is also common among westerners.

The Guaraní people in central South America have been eating stevia leaf since at least the 5th century AD. They call it ka’a he’ê. It means sweet herb.

Although a bit dated now, The Stevia Story gives a good run down of its history.

96-99% of the compounds in unprocessed raw stevia and monk fruit are either undesirable or not sweet tasting. The disadvantage with stevia is the bitter-tasting molecules. With monk fruit, it’s sulfur-containing volatile substances.

Only in recent decades have refinement technologies been developed to remove these and leave the desirable molecules which taste like sugar. That’s why widespread adaption of them is a relatively new phenomenon.

Unlike stevia, there is no evidence of monk fruit extract or sweeteners being mutagenic. As part of the Generally Recognized as Safe (GRAS) determination, lab results filed with the FDA report the “powder extract did not exhibit any cytotoxic or mutagenic potential.” It appears monk fruit is safe, including for diabetics.

With stevia, mutagenic side effects are seen in both lab and animal research.

This is why the acceptable daily intake (ADI) is capped at the equivalent of just 9 packets per day with stevia, but for monk fruit, there’s no limit as to how much you can safely consume. (6)

However be careful, because some brands use both sweeteners combined – that’s bad.

That’s why personally, this is the brand we use and we use a lot – daily!

Even though it’s not dangerous to DNA like stevia is, there are other potential disadvantage and health concerns to consider. (4)

Monk fruit side effects may include: 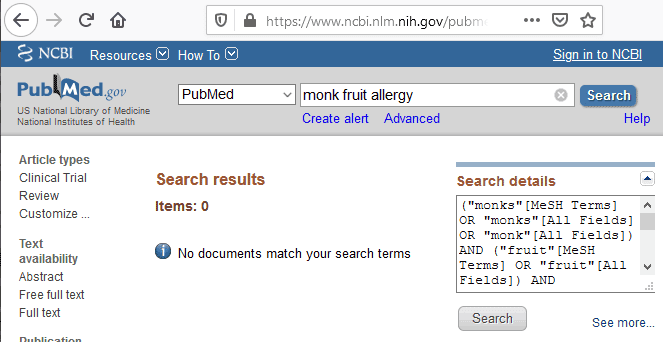 The US government’s PubMed database lists no documented cases of being allergic to monk fruit, or to the pure extracts/sweeteners made from it. The same can be said about other major medical literature databases.

Theoretically though, any and all foods pose a possible allergy risk.

If you are allergic to honeydew melons, cantaloupe, pumpkin, squash, zucchini, watermelon, or cucumbers, then you may be at increased risk of having a monk fruit allergy. This is because all are in the same plant family; Cucurbitaceae.

Even though it’s a newcomer to America and Europe, luo han guo has a long history in China.

Saraya, the Japanese parent company of Lakanto, has been selling monk fruit sweetened candy – as well as the stand-alone sweetener – for decades. Reports of abnormalities or adverse reactions among pregnant women and those who are breastfeeding their babies have not been reported.

Pregnant humans and/or extensive studies of pregnant rodents and animals have not taken place. Therefore, it cannot be conclusively claimed that monk fruit is safe to eat during pregnancy. However, this holds true for most foods.

In short, even though there are not studies to prove it’s safe, there is no evidence to suggest monk fruit sweetener or concentrate extract is dangerous during pregnancy.

Pure monk fruit extract has zero calories and does not raise blood sugar.

This graph from Lakanto, a major Japanese supplier of the sweetener, shows how their extract has a glycemic index and glycemic load of zero.

Then how can it cause your blood sugar to go up?

Not directly, but indirectly.

In 2017, the National University of Singapore published a study titled:

In the study, 30 healthy men used these sweeteners on different days. 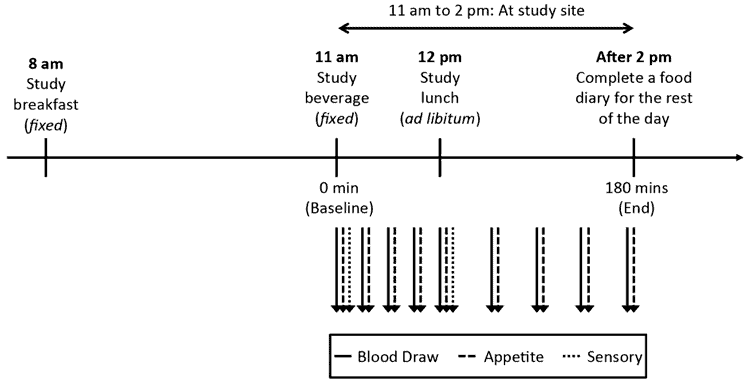 They ate a consistent and controlled breakfast in the morning, followed by a beverage sweetened with one of the aforementioned sweeteners mid-morning.

Then at lunch, they were free to eat whatever they wanted.

Did drinking a stevia or monk fruit sweetened beverage cause a spike? 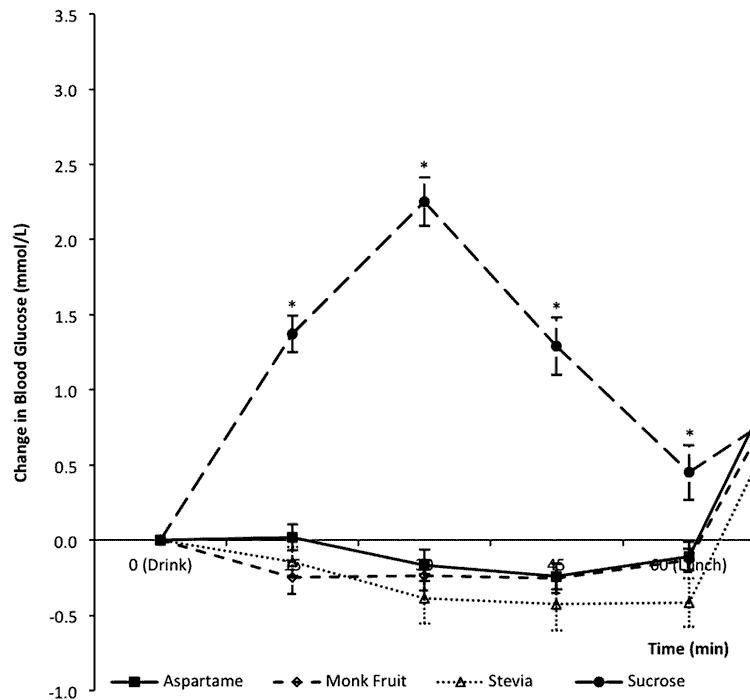 The lower lines represent beverages sweetened with monk fruit, stevia, and aspartame (e.g. NutraSweet, Equal). You can see how their blood sugar stayed the same or lower.

The high line plots what happened when the same people drank the sucrose (sugar) sweetened beverage. The level spiked big time during the 60 minutes or so afterward.

Now look what happened after they ate lunch… 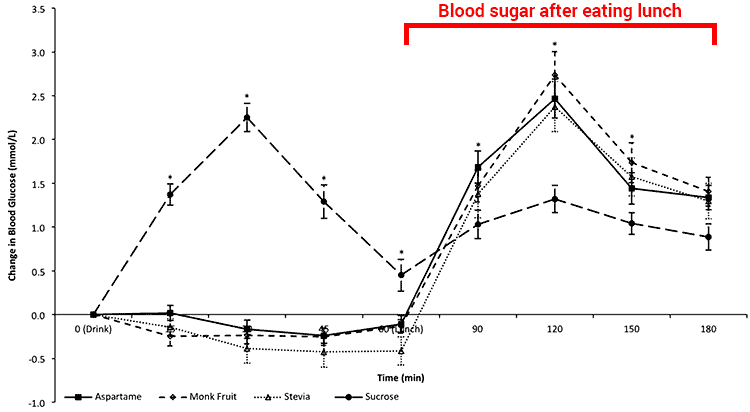 Those who drank the non-caloric and zero-glycemic sweeteners in the morning experienced higher blood sugar after lunch.

It’s not that monk fruit or stevia causes higher blood sugar directly. Rather, because the participants consumed fewer calories during the morning, it led to them eating larger lunches. This is why their blood sugar was higher. (5)

Monk fruit, stevia, as well as artificial non-caloric sweeteners like Splenda, Sweet ‘N Low, Equal, and NutraSweet don’t influence blood sugar in and of themselves.

However, the consumption of these empty calories may lead to binge eating later on, which in turn, could result in higher postprandial glucose and insulin responses. If you have type 1 or type 2 diabetes, such wild swings will wreck havoc on your health.

Monk fruit is still good for you but it’s important to be cognizant of this side effect. To maintain lower average blood glucose, make sure you still consume adequate calories while using this sweetener. Monk fruit will be bad for you if it leads to starvation, followed by binge eating.

Try healthy fats with high antioxidants, like pistachios and pumpkin seed butter. Those will have a trivial effect on blood sugar since most of the calories come from fat and protein, with almost zero carbs.

Does monk fruit cause gas?

Some people report monk fruit extract and excessive gas going hand in hand. In actuality, this is caused by products which dilute using sugar alcohols or maltodextrin, which is a filler carb extracted from corn.

Symptoms of bloating, nausea, and gas are almost certainly the result of these additives. The same holds true for many diabetic candies, which often use sugar alcohols.

Because 100% pure monk fruit extract is up to 300 times sweeter than sugar, it has to be diluted with something to make it usable for consumers to use.

Can you imagine measuring out 1/300th of a teaspoon?!

That said, we would agree that it’s unfortunate sugar alcohols are the go-to diluter.

Monk Fruit In The Raw uses maltodextrin. Since it’s not marketed as non-GMO or organic, there’s a high likelihood it’s made from genetically modified corn.

If you experience farting with these sweeteners, try using a form which doesn’t contain such additives.

Xylitol, a common sugar alcohol made from birch bark, is dangerous to dogs because it stimulates the release of insulin from the pancreas (it doesn’t in humans). This leads to a rapid decrease in the dog’s blood sugar (hypoglycemia).

If your dog ate monk fruit, it’s not known to cause hypoglycemia like xylitol does. However, because canine and feline studies have not been done, you should assume monk fruit and stevia (including Truvia) are not safe. Don’t intentionally let your dog or cat eat them. 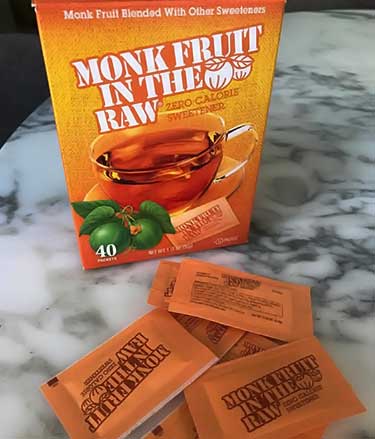 There are only a handful of monk fruit brands on the market; Lakanto, Monk Fruit In The Raw, Pure Monk, NOW Foods, Health Garden, KAL, ZenSweet, Swanson, and EZ-Sweetz. None are organic and most include sugar alcohols. Some combine with stevia.

Some taste awful, or you have to use a ¼ of the bottle just to achieve a medium sweetness.

That’s because the most effective extraction methods are patented. So it’s not like table sugar, which can be made in a commodity fashion.

Coming from someone who uses the sweetener daily and reviews many brands, without a doubt the best tasting monk fruit is Lakanto.

The dry granulated form however is diluted with non-GMO erythritol to achieve a 1:1 ratio to sugar in recipes.

While many people have diarrhea, gas, and bloating with typical erythritol, what Lakanto uses is a different form; it’s made by fermentation, instead of hydrogenation (hydrogen treated).

As a result, many customer reviews report no GI side effects with it. However, we still experience some digestive abnormalities when eating higher amounts of Lakanto powder.

For that reason, we opt for Lakanto liquid monk fruit since it’s not made with sugar alcohols like erythritol. Here’s the link for it on Amazon.

Monk Fruit In The Raw does not contain sugar alcohols, but either the extraction method or the maltodextrin seems to be causing gas for many people, when used in high amounts. 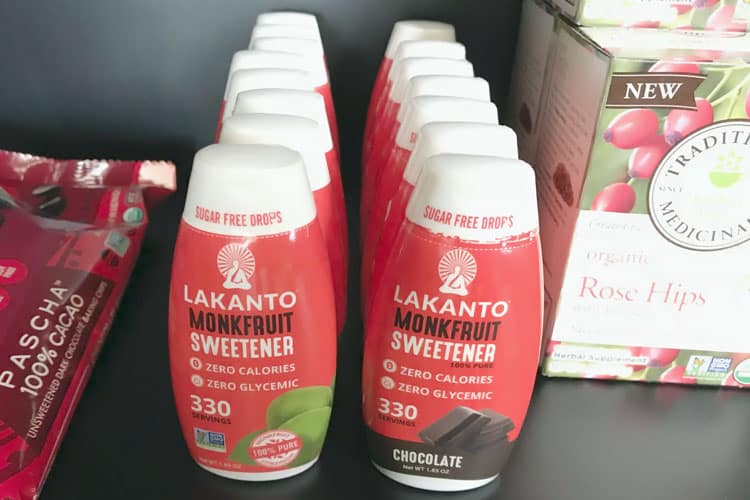 We like it so much, we buy up to a dozen or more bottles at a time. That’s a photo of what’s in our pantry.

It’s a small bottle but it’s extremely concentrated. A drawback with Lakanto is the claimed number of servings; 262-330 per bottle. Plus, it’s expensive.

If one serving a teaspoon of sugar, we are certainly not getting the equivalent thereof per bottle. That being said, it remain the best monk fruit as it’s way more concentrated and pure than competitors.

Complaints about quantity and price aside…

The Lakanto liquid sweetener is by far the best tasting extract on the market. We use it daily for tea, to sweeten quinoa flakes (it’s like oatmeal) and for homemade acai and maqui bowls.

The flavors available are original (plain), vanilla, chocolate, and lemon.

Lakanto chocolate is our least favorite, as it tastes kind of strange. The only reason we have so many bottles is because all the other flavors were out of stock for several weeks. That’s a reason we buy a lot at once, since original and vanilla seem to sellout often.

Vanilla is the best flavor, followed by original. Lemon is good too but other than for tea, it’s versatility for recipes is limited.

Here’s the Amazon link to get the vanilla and here’s the original. Give both a try.