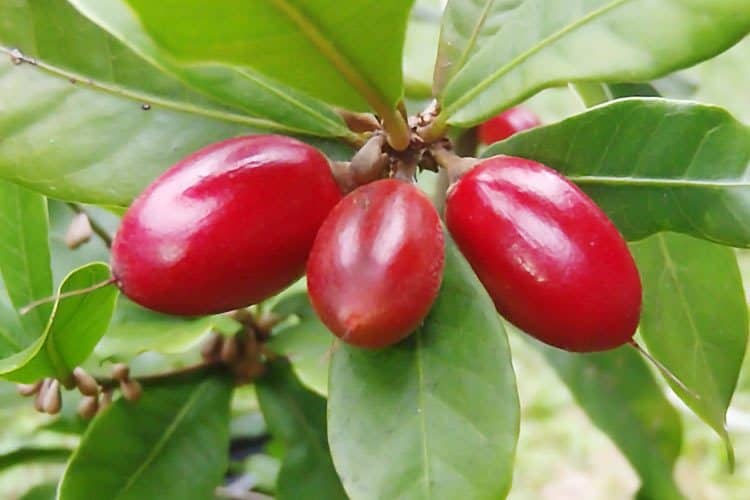 Miracle Berry and Miraculin: What They Are, Where To Buy

What is the berry that makes everything taste sweet? It’s called the miracle berry and its existence is not a myth. The scientific name for it is Synsepalum dulcificum.

Its history and how it works make it truly a one-of-a-kind superfood.

What are miracle berries?

Miracle berries come from a shrub native to West Africa. Each is bright red and ½ to ¾ inch in length. They contain a unique compound that binds to human taste receptors and temporarily make sour flavors taste sweet.

Other common names for them are miraculous berry and ledidi.

The first written documentation of them was by the French explorer Chevalier des Marchais. He mapped the Kingdom of Whydah, which is the present-day African country of Benin. 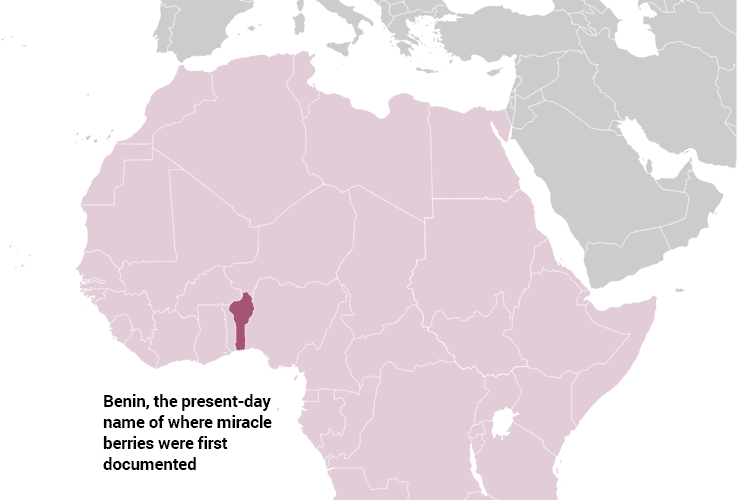 While there in the year 1725, he described how locals would chew the fruit prior to eating other food. (1)

You too can chew one or two prior to eating a lemon and it will actually taste like lemonade. That’s not an exaggeration.

The effects last anywhere from 15-40 minutes. By eating a berry or two beforehand, you can actually eliminate the need to use sugar or other sweeteners for many meals, snacks, and drinks.

The berries are good for changing the taste of citrus fruits, unsweetened yogurt, tomatoes (including ketchup and sauces), mustard, pickles, grapes, apples, strawberries, raspberries, blue cheese, and even apple cider vinegar, just to name a few examples. It will trick your taste buds into thinking these foods all have a sweet flavor.

What miracle berries taste like on their own is almost flavorless. The fibrous pulp is very low sugar with a hint of tang. People eat them not for their own flavor, but rather what they work with, which is almost any acidic food or beverage.

Are they safe to eat? The science suggests that. Humans have been consuming the miracle fruit since at least the 1700’s and most likely, their history as a food source dates back even earlier. There is no evidence to suggest they are poisonous, genotoxic, or mutagenic. In fact, the research suggests they are good for you in multiple ways.

Miraculin is the protein found in miracle berries responsible for the flavor-altering activity. It temporarily binds to human taste buds. At a neutral pH it has no effect. When in contact with acidic foods, the miraculin molecules change shape and “turn on” sweet receptors of the tongue.

First isolated in 1968, the miraculin molecule is quite large; its structure is made of 191 amino acids, plus a few carbohydrates.

Only within the past decade have scientists identified exactly which parts cause the flavor change; histidine residues on the molecule react with the human sweet receptor subunit hTAS1R2. (2)

Interestingly enough, the sweetness will be stronger when in contact with weak acids versus strong.

Yes, but with a catch. Miracle berries are not FDA approved as a food that’s Generally Recognized as Safe (GRAS). Instead, the FDA classifies it as an additive, which greatly limits how much can be added to a manufactured food or beverage.

The reason for this classification is shrouded in secrecy and many suspect the sugar industry played a part.

Biochemist Robert Harvey developed a natural sweetener made from the Synsepalum dulcificum fruit. His concentrated miraculin extract seemed destined to become the best sugar alternative. With financial backing from Reynolds (the aluminum foil company) and the investment arms of Prudential and Barclays, he started the Miralin Company. 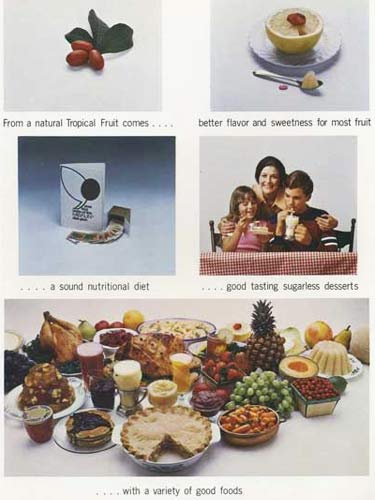 They had plantations in Jamaica and Puerto Rico growing the plant, as well as purchase arrangement with West African communities, in which children there earned $1 per liter picked, which is an inflation-adjusted equivalent of $5. A great opportunity for the poorest part of the African continent.

It was on the verge of launching in 1974 when the FDA suddenly flip-flopped and decided they would not approve it as a GRAS food and instead, label it a food additive. This was contrary to all the positive guidance they had purportedly given beforehand.

While not illegal, essentially the FDA ruling banned miracle berries for use as an ingredient in processed foods, for Miralin’s form of it. Because the amount would have to be within stringent food additive guidelines.

Today the powdered and tablet forms of miraculin extract are sold as an additive or dietary supplement, both of which are things that food manufacturers are limited in how they can use.

For Harvey to fight that 1974 ruling would have likely required years of contentious and expensive litigation. Without the money to pursue that, the Miralin company went bankrupt.

The strange part is that the “food additive” classification apparently was not because of dangerous side effects. None had been documented.

As detailed in a 2009 BBC radio interview, in the days leading up to the decision, Harvey would observe a car following him home and camping outside his home, as well as his office being burglarized.

Years later when Harvey used the Freedom of Information Act to obtain the documents on the ruling, most of the text was blacked out, which made it impossible to know what or who influenced the FDA decision. (3)

“Immediately, under penalty of law, I had to close the company down.”

That’s a quote from Harvey in The Fruit Hunters: A Story of Nature, Adventure, Commerce and Obsession, which details all the drama.

The only company that publishes nutrition facts for miracle berries is the Los Angeles based Nature’s Wild Berry brand. They are the only company in the United States (and perhaps the world) who sells the fruit in freeze-dried form, with no processing. Only the seeds are mechanically removed. 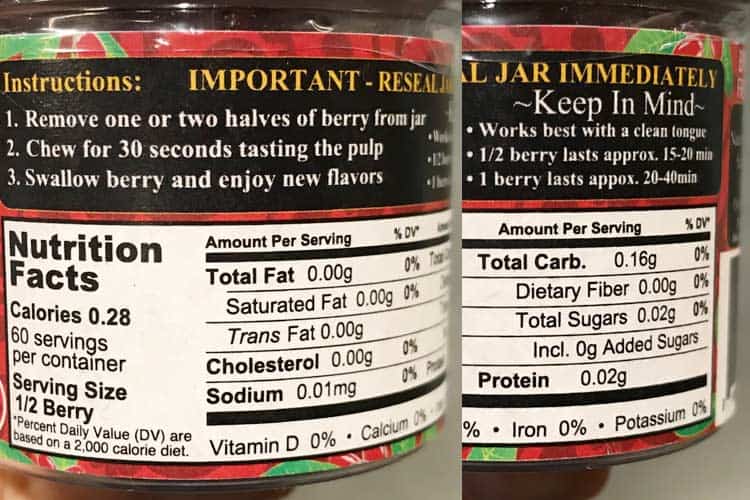 Even though they are freeze-dried, the nutritional values for calories, fat, carbs, protein, and mineral content will not differ from fresh miracle berries. With only 0.56 calories and 0.04g of sugar per berry, these are actually lower than blueberries for both values; those each have 0.78 calories and 0.14g of sugar. (4)

They have about 1/3 the sugar of blueberries and even less than strawberries and raspberries.

Not a sugar-free food, but one can imagine the glycemic index or impact of a couple would be negligible. Perhaps not even enough to measure.

The reason the nutrition facts are listed for such a tiny quantity is because it only takes chewing one or two to modify your taste buds. You could safely eat a bowl like you do with blueberries, but given their high price tag, that isn’t economically feasible in the US, Canada, UK, or anywhere else where they’re not natively growing.

In a more processed form, there is the brand Mberry tablets. Here are the nutrition facts for those: 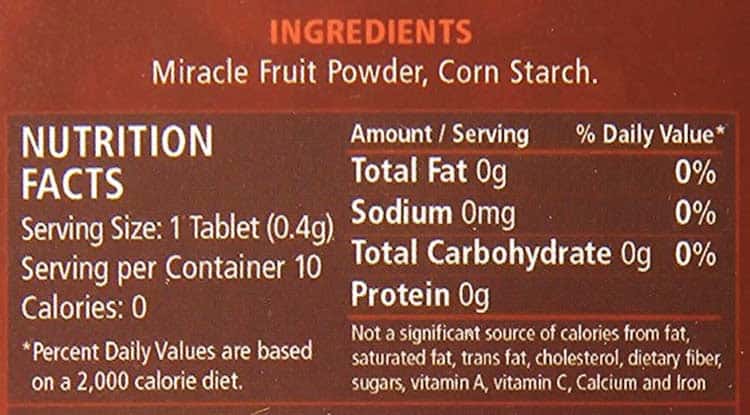 The idea is that you chew one of these dissolvable tablets prior to eating other foods. Mberry claims they are “as seen on” CNN, The Dr. Oz Show, and in The New York Times. You can get a pack on Amazon.

Marketed under the name ledidi instead of miracle, the first brand listed offers their freeze-dried berries for sale on Amazon as well.

There are fewer than 100 medical and scientific papers about the Synsepalum dulcificum plant in the PubMed database. While the research is extremely limited, a number of exciting observations have been reported.

ORAC value testing has not yet been done. While the activity is not quantified overall, other research has shown how much antioxidants there are in the miraculous berry by type. (5)

Eating one or two will only provide you with trivial, insignificant amounts of protein. If this is ever cultivated and sold as an affordable food, it may rank among the highest protein fruits.

Its content for vitamins A, C, and E are lower than blueberry, raspberry, and blackberry. Though its protein content is better.

It contains all of the essential amino acids, as well as high amounts of the BCAA leucine, at 2.35g per 100g of protein. Lysine, glutamic acid, and aspartic acid are also in relatively high amounts. (6)

One advantage for diabetics are obvious – it serves as a potential sugar replacement, if chewed prior to a meal. But that’s not the only reason these berries might be good for both type 1 and type 2 diabetics.

In a study with rats, it was found to improve insulin sensitivity. Human research has not yet happened. (7)

In a study with mice, miracle fruit extracts were found to lower uric acid levels at a rate equal to allopurinol. Sold under the brand names Zyloprim and Aloprim, that’s a prescription medication used to treat gout and kidney stones. (8)

It’s unknown if this effect happens in humans, since they have yet to be tested.

May support appetite during chemo

As published in the Oncology Nursing Society Journal, a small pilot study with 8 cancer patients “reported positive taste changes with the supplement.” (9)

There is not enough research to determine if it’s useful for cancer patients, though theoretically, it might help them in two ways:

Do not use during cancer or any other disease without first consulting your doctor. It is not intended to diagnose, treat, cure, or prevent any disease.

Its native growing region in Africa is close to the equator. On the east side of the continent it spans Kenya, which is actually on the equator, and on the west side it’s in countries like Nigeria, Benin, and Ghana. Those are just a few hundred mile north. 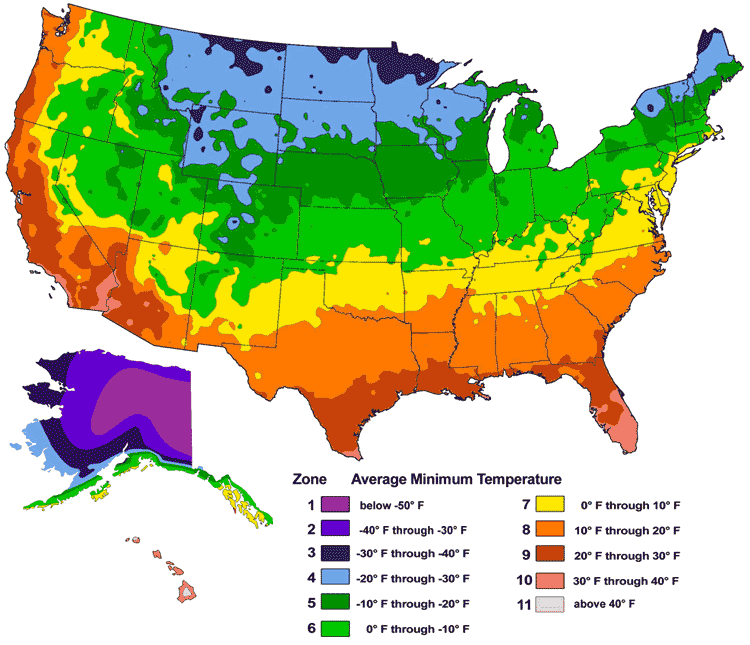 As such, it’s a tropical plant that requires hot temperatures. It’s not suitable for outdoor growing in the United States in areas that get frost. The berry’s USDA growing zones are 9 through 11.

You can grow the miracle berry tree on your patio during the summer months in zone 4, which means the entire continental U.S. is covered.

During the winter months, you can move it indoors. In the wild, the plant can grow bigger, but when domesticated, its mature height is just 3-5 feet. Since the white flowers are self-pollinating, it can bear fruit indoors, even without bees.

It’s easy to grow, as it only requires partial sunlight and occasional watering. In as little as year, a seedling will begin bearing fruit, usually between May and October.

Growing the plant yourself may be the only way for you to acquire the fresh fruit. With the exception of perhaps an obscure grower at a farmers market somewhere, no one sells fresh miracle berries. You can’t buy them at grocery stores, not even the specialty markets.

While none of us here have bought a plant yet, that’s only due to lack of space. More than one of us is considering buying a small living tree on Amazon and giving it a whirl. Even if it failed, it would be an affordable experiment.

Don’t even bother looking for the miracle berry seeds or plants for sale at Home Depot or Lowes. It’s a very hard-to-find species!

Where to buy miracle berry tablets and fruit is mostly limited to online retailers. When it comes to brick and mortar stores, we have only found the freeze-dried berries at one place – an independent grocer in west LA. The Mberry tablets are not even sold on Walmart’s website, let alone their store locations.

At first impression, the price of $50 we saw for the dried at a local store seemed totally outrageous. 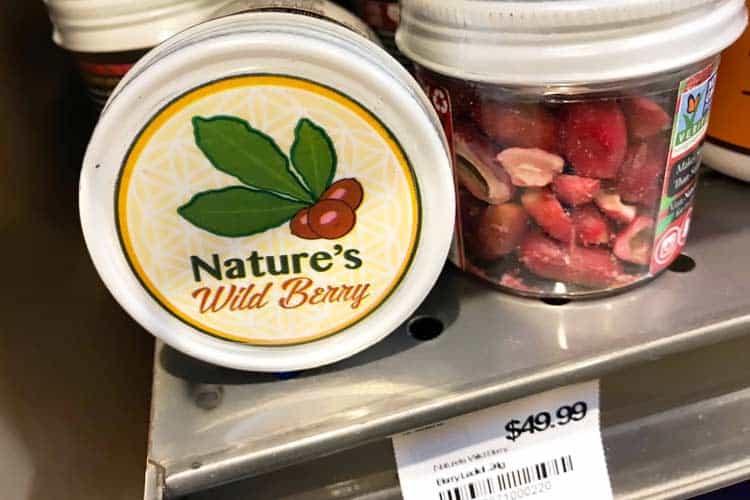 It seems like a big ripoff, until you consider these points…

You may or may not be able to get it for a slightly better price online. Check the current pricing on Amazon and while you’re there, read these reviews on it.