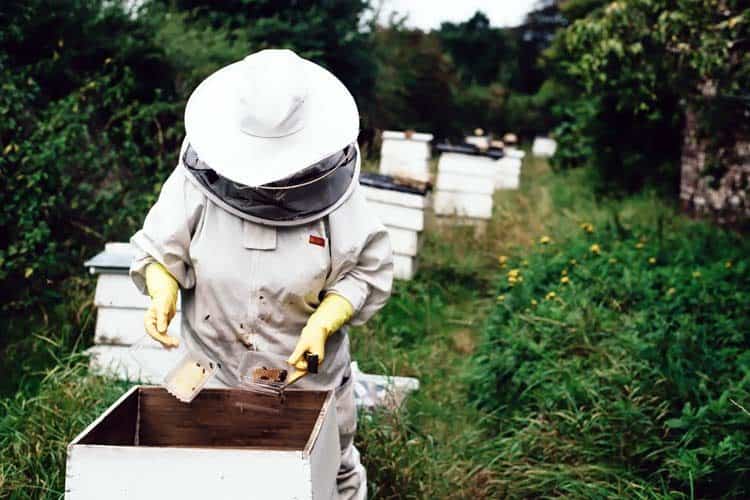 Since the risk of a canker sore becoming infected in healthy individuals is minimal, they’re not particularly dangerous, but they are painful!

These mouth ulcers have plagued humans throughout history and even with modern science, we don’t seem to be much better off at treating them than the Egyptians were some 4,500 years ago.

As documented in the British Dental Journal, hieroglyphics and ancient documents suggest that just like us, they used topical treatments and mouthwashes that might relieve pain, but didn’t really do anything to resolve the root cause. (1)

Injury and acidic foods can cause them, as can stress, hormones, and autoimmune responses we don’t fully understand.

Since both prescription and OTC medicines offer minimal benefit, should we take another look at some of the ancient remedies for how to heal a canker sore overnight, or at least make it hurt less? How about other types of sores in and around the mouth?

There was a human study carried out by a school of dentistry at a Saudi Arabian university to try and answer these very questions. They wanted to measure what benefits – if any – the home remedy of honey may offer. (2)

A total of 50 patients with various types of oral lesions participated:

Some home remedy enthusiasts talk about using Manuka honey on cold sores and scabs, however the type used in this study was described as “pure, unboiled, commercial honey.” In other words, it was just regular honey and not Manuka.

Using Q-tips, study instructions are to apply a thin layer of the honey over the lesion(s) 4 times per day, after eating and before bed. Nothing should be eaten or drank during the 30 minutes following an application.

They were to carry out these instructions until their lesions resolved. Journals were kept to record pain levels; severe, moderate, mild, or no pain.

In the 19 patients who had what’s considered a typical canker sore, after just 1 day of treatment, 92% reported their pain was gone.

As far as the mouth sores themselves, at the start, their average size was 0.87 x 0.67 cm, which is about 1/3 x 1/4 inch. You would probably agree that’s the typical size for the white part of these common painful ulcers. How fast these healed was remarkable:

“In most cases (92%), the ulcer size disappeared at the 3rd or 4th day after treatment except one case where the size was completely diminished by the 8th day. The mean healing period was 4 days.”

When it came to the 5 patients who had typical cold sores on their lips and in their mouth from the herpes simplex virus (HSV), there was “immediate relief” of the pain on day 1 and complete healing within 8 days, reported by 4 of them (80%).

The 5th patient was a dental student who said she got these eruptions at the same time every year, from the stress of preparing for exams.

Her relief came on day 2 and the treatment seemed to prevent the cold sore from going full blown – the tingling sensation disappeared without an eruption as one would typically get. So in her case, there was no healing period since there was prevention of the fever blister forming.

For those who had bullous lesions in the mouth, their severity to begin with was all over the map, so it’s hard to categorize them as a whole. As one example, consider the patient who had these painful ulcers on her tongue and side of mouth in the 3 months leading up to the study. 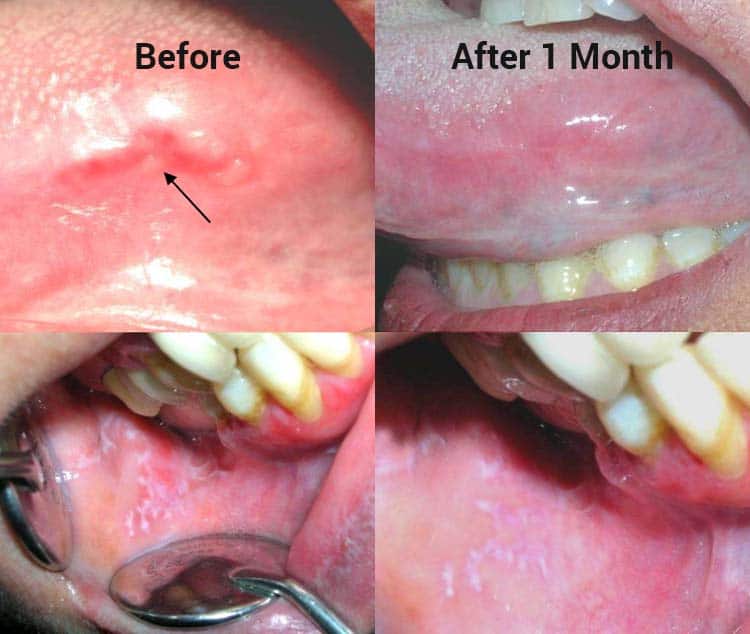 For treatment of it, she was on the oral steroid prednisone (20 mg) taken daily, a 4x daily mouth rinse, and topical applications of a synthetic corticosteroid.

After using the honey, her pain disappeared in a week and in a month, the ulcers were gone. Even 6 months later, they had still not returned.

For the patients with Candida yeast, which is a stubborn fungal infection, all 4 healed within 1 month of treatment. Lab testing confirmed the pathogen was no longer present.

While most are familiar with what psoriasis is, few are aware that it can also manifest inside the mouth.

Mouth psoriasis usually affects the inside of the cheeks and tongue, and less commonly, the gums. Painful red patches with white borders, ulcers, and peeling gums are among the side effects. Since it can resemble gingivitis and other gum disease and infections, it’s said to be “an overlooked enigma” that’s under-diagnosed. (3)

The two patients in the study with oral psoriasis had “complete resolution” after 2 months of putting the honey on their sore areas. At the 8 month follow-up, the tissue was still healthy and symptom-free.

While these 50 patients had very different types of canker sores, cold sores, and mouth lesions, overall the trend was the same… use of the honey correlated with better-than-average healing.

As with Orajel, hydrogen peroxide, and other medical treatments, when first applied, honey on canker sore hurts. It may sting and cause the sensation of burning, though not as bad as apple cider vinegar or hydrogen peroxide. With honey, the burning/stinging side effect generally dissipates within one minute. Among 50 patients studied, “no systemic adverse reactions were noted in any case.” Furthermore, the authors claimed that:

“Significant adverse effects have never been reported in the medical literature in association with local application of honey.”

This was not double-blinded or even a single-blinded study. The patients, as well as the people administering the study, knew what the treatment was. The placebo effect may have been responsible for pain reduction.

Since they were putting honey in the mouth and tasting it, creating an actual placebo group would have been challenging. Everyone already knows what honey tastes like, so how would you fool someone with a dummy version?

Still, they should have designed a placebo group that at least used another sweetener. Not table sugar, but coconut nectar, jaggery, or yacon syrup could have served as a good comparison.

There was no control group, or patients who didn’t receive the lesion/canker sore honey remedy. Even with this flaw in the study design, the researchers still had data to compare to; how long these conditions typically take to resolve on their own.

The groups of patients were small. With 2 to 19 patients per category, you’re forced to make conclusions off data sets that are small; the positive results may just be coincidental. Still, there was good evidence to suggest the honey was working in at least some regards.

Even though only 5 patients were in the group, using honey on cold sores overnight appeared to be effective at eliminating the pain. However, the healing time of 8 days is average for an untreated cold sore, which suggests herpes anti-viral benefits are unlikely. At least with the commercial version tested. Manuka may have performed better.

The most common drug for herpes sores and fever blisters is acyclovir (Zovirax, Sitavig). That only shaves about one day off healing time, so it’s not like cold sores on the lips do dramatically better with the common prescription treatment, either. (4)

Since canker sores were the largest group studied, the best evidence is for them. What honey does do for canker sores remains unproven, though results suggest it’s effective at pain relief, with 92% claiming no pain after one day. The same percentage experienced complete healing of the ulcers by day 4, which may be faster than normal.

The second largest study group was erosive lichen planus. These ulcers can be quite similar to canker sores, but they keep coming back. It’s a chronic condition. These patients also seemed to experience a benefit from the honey treatment. Given that that the cases varied so much in severity and location to begin with, it’s hard to evaluate them as a whole.

How about cold sores?

Based on study results, only pain relief appears to be a possible benefit for cold sores on the lips and inside of the mouth which result from the herpes simplex virus (HSV).

The fact that 4 out of 4 patients had no Candida yeast growing after a month of treatment is noteworthy, yet the group is small it’s hard to give it much weight.

Honey remains an unproven remedy for all of these conditions. It may or may not help. Given that no side effects for such uses have been reported in medical literature to date, these home remedies seems like a low-risk experiment.

If honey does help with mouth and lip sores, no one can say with certainty as to which mechanism(s) are responsible. The researchers in this study highlighted several science-based reasons why it might work:

One thing this and similar skin care studies have in common is that unpasteurized raw honey is what appears to exhibit these effects. The destruction of enzymes and certain compounds would be expected with store-bought brands that have undergone processing and/or heat-treatments.