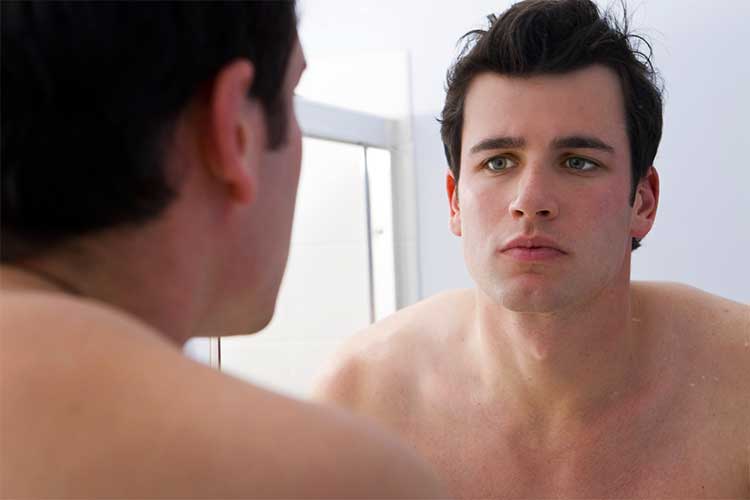 Magnesium L Threonate Hair Loss Benefits Might Be For Real

Snake oil salesmen love to prey upon men going through male pattern baldness. Apparently, the allure of easy money is just too appealing for them to pass up.

As a man, you are experiencing the loss of something you probably never thought about in your earlier years… your full robust head of hair. It’s something you took for granted, until your hairline began receding and areas thinned out.

Now you’re desperate to get it back, grasping for any viable solution. Even if it’s not an outright cure, just something to stop the bleeding and postpone the inevitable.

In turn – as you likely have already experienced – there are all kinds of charlatans trying to make a buck off your misery, selling gadgets, gizmos, contraptions, and supplements which all promise to help.

Sadly, most are a scam. Some are legit in theory, but probably not to your situation.

Hair loss vitamins may be a solution for malnourished men in rural India, but as an American (or similar) it’s almost guaranteed that your diet is not deficient in biotin, cysteine, and other nutrients being peddled to you.

And guess what? Magnesium threonate might not help either. The research is very limited and when all is said and done, perhaps it too will turn out to be yet another false hope in that battle every man faces sooner or later.

It is believed to reduce DKK1 expression, a key factor in balding

But unlike most of the other hair loss remedies being claimed or peddled, there is actually some respectable scientific evidence to suggest this compound might inhibit the hormone dihydrotestosterone (DHT), which is a key cause in male pattern baldness. The prescription medication finasteride (Propecia) works by decreasing DHT concentration.

What is magnesium L threonate?

This molecule is created by taking a sugar that comes from a vitamin C metabolite – called L threanoic acid – and combining it with magnesium.

In this form, it has demonstrated the ability to cross the blood-brain barrier, which is rare for supplemental forms of magnesium.

In one of the first research papers published about the compound back in 2010, MIT researchers reportedly took a look at all supplemental (non-dietary) forms of magnesium available and by using an animal model, they discovered that only magnesium threonate had the ability to increase magnesium levels in the brain (i.e. crossing blood-brain barrier). The others were not successful in doing so (1).

It’s no surprise that 90% of the buzz you hear about it is related to nootropics or so-called brain boosting benefits. Though it might be useful for more.

There are only 6 essential minerals for the human diet and magnesium is one of them. It’s often mentioned in the same breath as bone health, but the fact is that it’s needed for over 300 types of biochemical reactions throughout your body.

These reactions play an important role in muscle and nerve function, the synthesis of protein, blood pressure, and blood glucose control (2).

There are countless ways to get other forms of magnesium naturally in your diet, but food sources of magnesium L threonate do not exist. This is because it’s a synthesized form, which was just created within the past decade.

Given that it’s covered by a total of 7 approved and pending patents, the bad news is that you probably will be paying up for supplements which use this versus other non-proprietary forms of magnesium.

The manufacturer uses the trade name Magtein for it. They don’t sell it directly to consumers, but rather they sell the raw ingredient to various supplement companies who then use it in their products.

Most of them don’t actually call it Magtein on the label or packaging. Instead, they often stick with the magnesium threonate name.

Whole grains, green leafy vegetables, beans, and nuts are all excellent food sources of natural magnesium in your diet, but those are all different than this particular form.

The research to date

We emphasize the word “might” because it is only suspected at this point.

We hate hearing people get bamboozled into paying up for expensive supplements, believing there is a proven benefit when there really isn’t. To be clear, we’re not against taking magnesium L threonate bulk powder or capsules. Quite the opposite, actually, However because it’s not exactly cheap, before you buy it you need to consider that you are basically being a guinea pig and will be using something which has not been proven in humans through clinical trials, at least for hair.

Plus, the magnesium L threonate side effects (or any magnesium supplement for that matter) can include sleepiness and lethargy in some people. Digestive discomfort, vomiting, nausea, and diarrhea are other possible safety concerns. So even if it might be helpful, one has to weigh the potential side effects versus any benefit. At the very least, the prudent thing to do would be to buy the smallest bottle possible, rather than a 90 day supply that you might want to throw out after a couple weeks of using it.

Lastly and perhaps most important of all, one needs to be aware that most research is not be focused on male pattern baldness or hair loss. 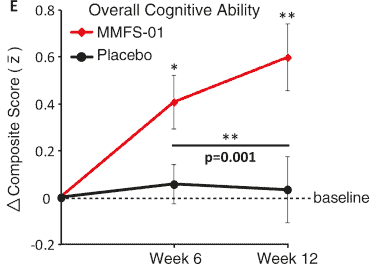 If you do a search on PubMed for this compound, you will see 12 research papers published to date (3).

The earliest study is the 2010 MIT study mentioned above. Neither that, nor any subsequent research published even mention the word hair.

Instead, they’re focused on measuring cognitive benefits. From neural stem cell proliferation to possibly improving memory, Parkinson’s and Alzheimer’s diseases. Since it has the apparent unique ability to effectively cross the blood brain barrier, everyone seems to be researching it for brain health.

The graph you see here was part of a study published in Journal of Alzheimer’s Disease (JAD) in 2016. It shows the results of a randomized, double-blind, and placebo-controlled trial involving older adults (4). MMFS-01 references the branded supplement called ClariMem, which uses L threonic acid magnesium salt (which they call L-TAMS in their marketing).

The most recent study from 2020 showed how magnesium L threonate lowered inflammation in the brains of rats who had induced cystitis (inflammation). Neuroinflammation is associated with depression, memory problems, and pain, so reducing it may help some occurances of them. (5)

Funny enough, it’s not the active ingredient – the magnesium – which is suspected for benefiting hair loss. Rather, it’s the delivery vehicle of L threonic acid which may be responsible.

All the studies involving cognitive health don’t really care about that L threonic acid, since its basically just used to get the magnesium past the blood brain barrier. It’s the magnesium in the brain they’re focused on. 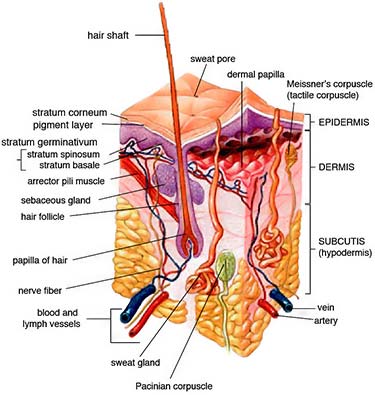 On the other hand, you may be more interested in the L threonate part.

A South Korean University way back in 2010 conducted a study in which they looked at the side effect L threonate would have on cultured dermal papilla cells or DPCs.

As seen in the figure, those are under the epidermis, on top of the dermis. Keratinocytes, which is an epidermal cell that makes keratin, were also cultured.

These were not animal cells, but rather from human skin. They were leftover pieces from male scalps that had undergone hair transplant surgery.

DHT is a derivative of the male hormone, testosterone. Genetically, some men are more sensitive to it than others. In those men, it can be a major cause of androgenetic alopecia or male pattern baldness, which is responsible for the majority of cases.

What DHT does to their affected hair follicles is shrink them and shorten their life cycle (as hair grows in cycles). This progresses to a point where the follicle stops producing hair altogether. Or more accurately said, hair may still be produced but it will be so thin and frail, it won’t be visible or stay attached.

In this study, when the L threonate was added together with DHT in the cultures, the DHT was found to be “significantly repressed.” 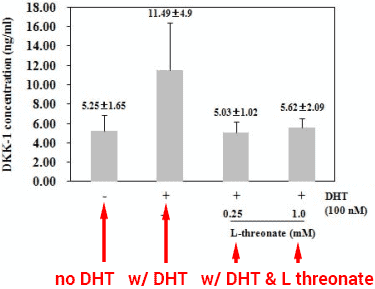 If L threonate is able to “turn off” or reduce the expression of the genese DKK1 (dickkopf-1), then it is able to reduce the effect of the DHT on these cells (6).

We already know that suppressing DHT can be an effective treatment for many men experiencing male pattern baldness, as evidenced by Propecia.

Surprisingly, no one appears to be conducting further research on this suspected benefit of L threonate. This may be because it’s non-proprietary (the patents cover it when combined with magnesium, not by itself).

You do see a lot of people talking about the idea of using magnesium L threonate for hair growth, but reviews done over time of people actually using it for that purpose were not seen, neither on forums or within the dozens of product reviews we looked at. If you have experience using it for this purpose, please share your review in a comment.

Aside from bulk powder that’s sold to supplement manufacturers, the catch-22 is that no one sells L threonate on its own.

Therefore, you will probably have to buy a magnesium L threonate supplement.

However the fact that it’s bonded with magnesium is probably to your advantage regardless.

You see, L threonate is quite unstable on its own, so it really should be chelated with a some sort of mineral. It may not have to be magnesium, as calcium, iron, zinc, etc. could also be viable agents. Though it needs to attach to something in order to be stable.

Considering the exciting research surrounding its ability of getting magnesium into the brain and the alleged cognitive improvements that are suggested by research, the magnesium combo is probably the best form as long as you don’t have side effects from it.

There are a number of companies selling it. On Amazon we like:

Jarrow Formulas, Dr. Mercola, NOW and others are also found there. Since manufacturers are sourcing the MagTein ingredient, the brand you buy is less important. Go for whoever is cheapest among the reputable brands.

As far as the calcium combo, that’s patented too and we only know of one brand name selling it. We haven’t read any hair loss reviews or even related discussion for it, as people take it for bones. It may be the best route to try if you’re prone to magnesium side effects: