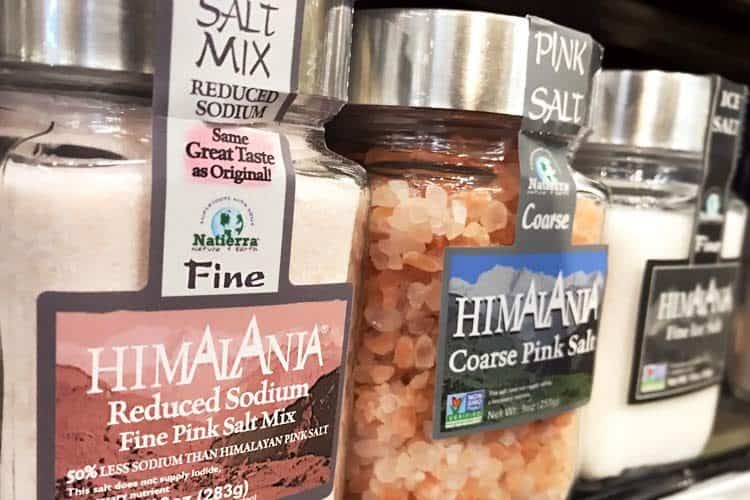 Is Low Sodium Salt Good For Health or Just Misleading?

Salt is good for you!

Or at least, that’s what you hear some people saying these days. They make statements like pink Himalayan sea salt doesn’t raise blood pressure. Or that the brand Real Salt actually lowers it.

Sorry, those and similar statements are myths. At least if you’re talking about their regular (non-reduced) versions.

It’s true that some types of salt are less bad than others, yet they all still contain roughly the same amount of sodium… and that is the part that’s bad for you. The trace minerals in your white, grey, black, green, or pink sea salt may be healthy, but they don’t change the effect that excess sodium will have on your body.

Contrary to what some may claim, the scientific and medical consensus on high sodium intake is no different than it was last year, last decade, or beforehand.

There’s no new clinical data to suggest it’s healthy. In fact, the science actually reports that excess sodium is even worse for you than previously thought.

In a clinical study of 224 people with high blood pressure, the C-reactive protein (CRP) level – which is a time tested way to measure inflammation – was found to be “significantly higher” in the group consuming the most salt in their diet, relative to the low and medium salt-intake groups. (1)

If you think sodium only promotes inflammation in people with high blood pressure, you’re wrong.

As published in the official journal of The American Academy of Pediatrics, a study looked at 766 teens ranging from 14 to 18 years old. They were specifically healthy teens and consisted of 389 Caucasians and 377 African Americans.

Even when adjusting for differences such as body fat percentage and sugar intake, dietary sodium intake was directly correlated with tumor necrosis factor alpha (TNF-alpha), which is another reliable measure of inflammation in the body. (2)

Those are just a couple examples of why you should cut back on the salt. Big time.

True, it is an essential mineral for humans that serves as an electrolyte. However, the same holds true for other life forms… like the plants and animals you eat.

Even when you eat them without added salt, you’re already getting more than enough sodium just from what they naturally contain.

It’s been proposed that our ancient ancestors consumed the equivalent of less than 1,000 mg of salt per day. Now we’re eating around 10,000 mg daily! Even if you can’t achieve that low benchmark, minor decreases can result in major risk reduction for strokes and ischemic heart disease. (3)

In short, the Western diet forces all of us to be cognizant of our intake. The best way to do that may not be what you’re expecting.

What is low sodium salt?

Common brands include Lo Salt, Morton Lite Salt, Tata, Saxa So-Low, and Himalania reduced sodium pink salt. These are still made of salt, but they substitute a portion with potassium chloride. Some also include glutamic acid, lysine, and magnesium carbonate to enhance flavor. They have 30-66% less sodium than regular table or sea salt.

In short, what is meant by low sodium salt is simply regular salt that has been diluted with other ingredients. The actual salt component still has the same percentage of sodium in it. 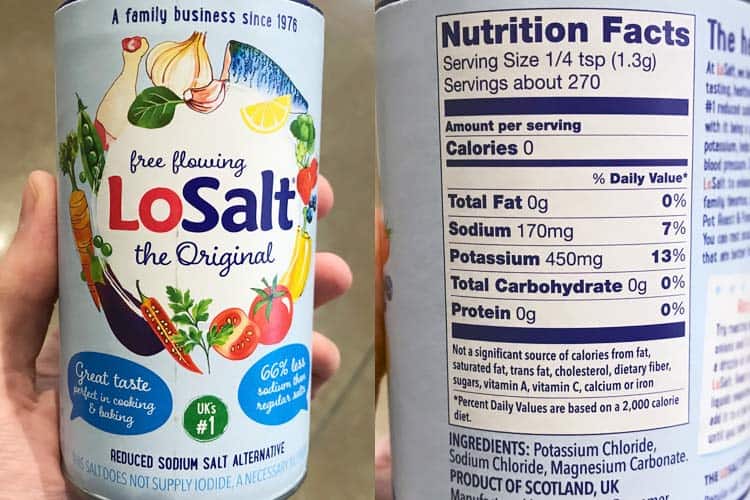 LoSalt is the number one selling reduced sodium substitute in the United Kingdom. You can buy it at any Tesco or Sainsbury’s. In the US and Canada, places like Whole Foods often have it. A ¼ teaspoon of regular salt contains 520 mg of sodium. LoSalt contains 170 mg of sodium, as the rest has been replaced with 450 mg of potassium. 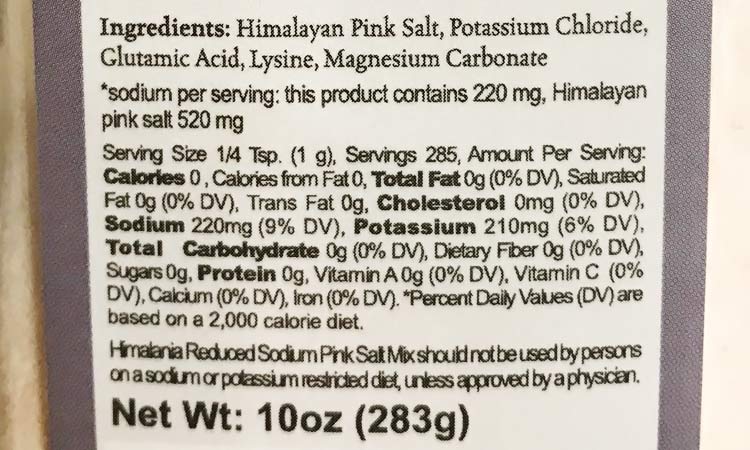 Himalania reduced sodium fine pink is similar to LoSalt. The composition is 220 mg of sodium and 210 mg of potassium. The rest is glutamic acid and the amino acid lysine, a hydrolyzed protein that makes the potassium chloride taste less bitter. Both have a trace amount of magnesium carbonate.

Morton Lite Salt, Saxa So-Low, and Tata are similar to these. The brand NoSalt is a sodium-free alternative which is made with 100% potassium.

Does it taste different?

Because they still contain 30-50% salt, low sodium salt tastes similar to regular Morton table. What’s different is a slight bitter metallic flavor that comes from the added potassium chloride. Some brands do better than others at masking it.

Aside from potassium, the only other mineral which tastes salty to the human tongue is lithium.

Since its approval by the FDA in 1970, lithium citrate has been used a prescription antimanic agent for bipolar disorder and manic depression.

Given its effect on the brain, lithium is definitely not suitable for flavoring or consumption outside of a medication. Though some people do take microdosages of lithium orotate as a dietary supplement.

Is it good for blood pressure?

Low sodium salt can be both good and bad for blood pressure. Randomized clinical trials have reported that potassium chloride can lower systolic blood pressure by 11 points and diastolic by 5 points after consumption. However, it can have side effects. 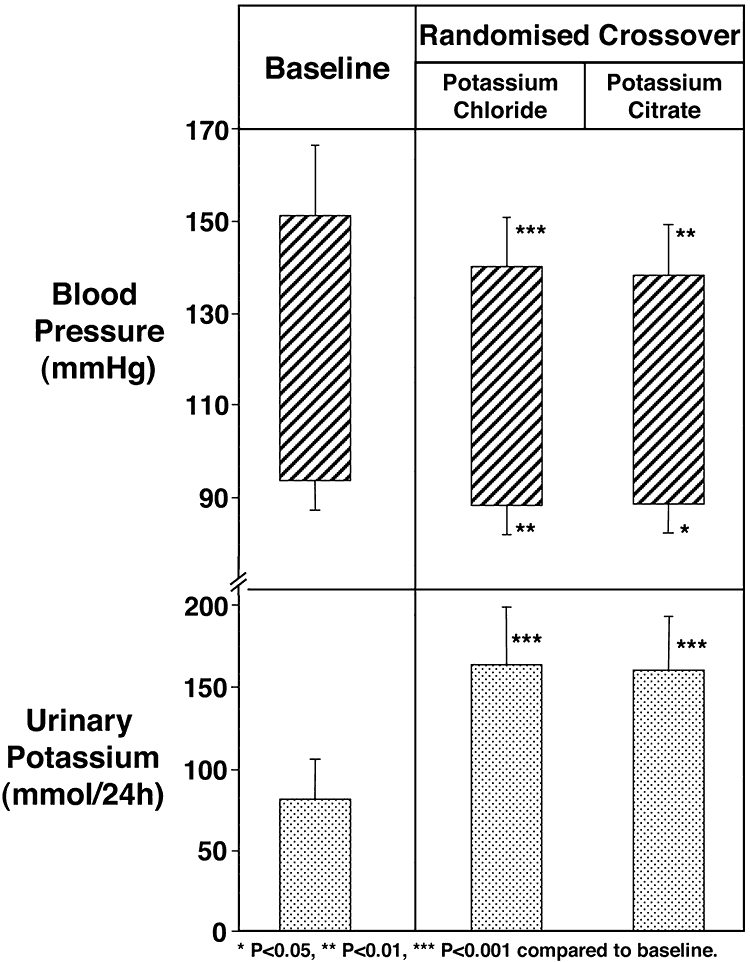 Those are the results of hypertension men and women who received 96 mmol/d (12 Slow-K tablets) daily for one week. Although this is not the same thing as consuming a salt alternative, it is a controlled dosage of the active ingredient they use. (4)

Slow-K is a prescription medication and the amount of potassium chloride in Lo Salt and similar products will be significantly lower.

Therefore, the benefit low sodium salts offer for the lowering of blood pressure will be more minimal – probably only a drop of a few points for systolic (at best) and an even smaller improvement for diastolic. Since clinical trials have not been done to measure their efficacy, no one can say for sure.

They taste pretty good and at Walmart, you can buy an 11 ounce container of Morton Lite Salt for just $1.98. It’s 50% less sodium than their regular iodized.

Flavor, price, and availability are not the reasons why these products are relatively unpopular.

Side effects of low sodium salt come from the potassium chloride content. Too much can cause an unsafe drop in blood pressure and affect the cardiac muscle, leading to an irregular heartbeat. Damage to kidneys can result with long term use, as the they must work harder to remove excess potassium from the blood. Diabetics are at increased risk of kidney damage from using low sodium replacements.

Other less serious reactions from reduced sodium salt substitutes include upset stomach, diarrhea, and tingling in the fingers, hands, and/or feet. The tingling is caused by throwing off the body’s electrolyte balance, which can alter nerve sensations.

Due to the cardiac effects it has, potassium chloride is actually one of the drugs used in lethal injections.

While that may sound scary, the lethal dosage for it is actually similar to regular table salt. (5)

Developing a sodium deficiency is the least common side effect. Americans and Europeans eat 600% to 1,000% more per day than they need to. In India, the average intake is 10,980 mg per day of salt. Unless one has a disease which predisposes them, it’s highly unlikely you will develop a sodium deficiency from using low sodium salt. Not even with long term use. (7)

Verdict: Is it dangerous or healthy?

The healthiest choice is to give up the shaker entirely. That includes forgoing the reduced sodium versions.

High amounts of salt are already added to practically all processed and prepared foods. The best thing you can do is break the habit of adding even more.

After several weeks of no added salt, foods which are mildly or moderately salted will begin to taste salty once again, without the shaker. It just takes time for your palate to adapt to that new normal.

Here at Superfoodly, we haven’t used salt shakers for over a decade. Within a couple months, we were over the addiction and “normal” foods became salty tasting on their own.

If you insist on adding salt to your food, then low sodium salt is a healthier alternative to the regular. The potassium from it will not be a danger if you are a healthy individual without diabetes or kidney disease. Because potassium deficiency is common, it can serve as a safe replacement for sodium, a mineral which is overconsumed worldwide.

The Scientific Report of the U.S. Dietary Guidelines Advisory Committee says that potassium is an “underconsumed nutrient” and less than 3% of the population fulfills the RDA. (8)

The best replacement for salt is to use sumac, which is a gluten free Middle Eastern spice. Not only is it the highest antioxidant spice, but it also has an uncanny flavor reminiscent of lemon salt. Your tongue won’t believe that it’s nearly sodium free. 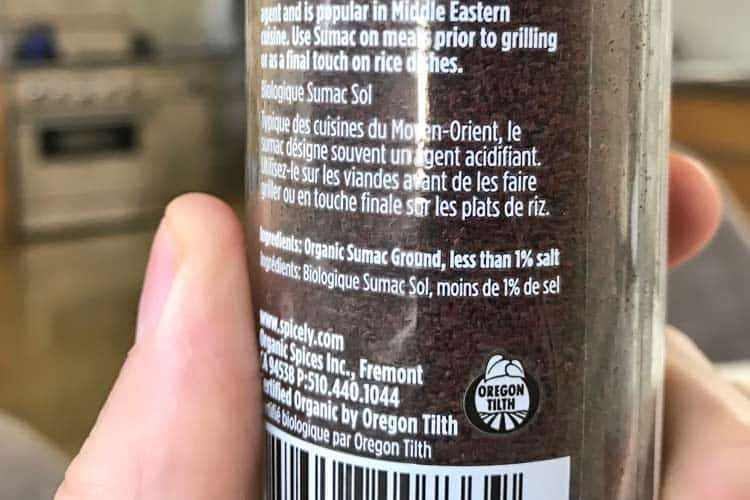 Be careful though, because most brands do add salt which defies the point. The brand we use ourselves has less than 1% salt. It’s Spicely Organics and while you can buy it in a small shaker, it’s awfully expensive. What we do is buy the 1 lb bulk bag on Amazon and then use that to refill the shaker.