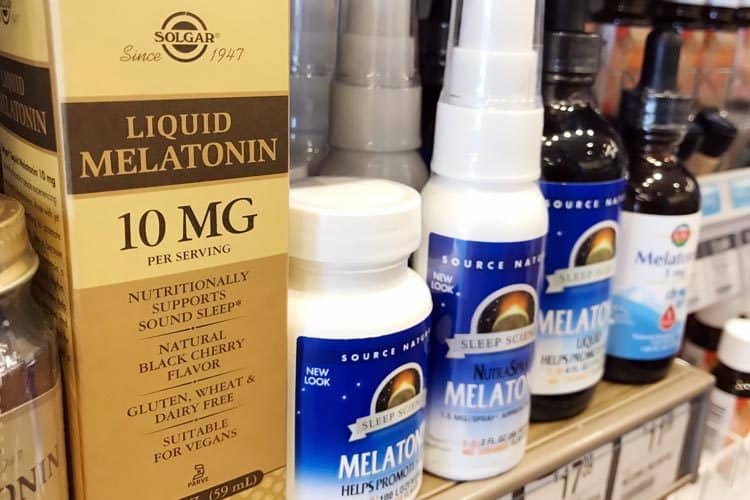 Why Liquid Melatonin 1mg Is The Best Dosage For Sleep

If so, there’s a good chance you felt groggy the next morning. Not to mention, those strange and lucid dreams. Many people experience those.

Given the unpleasant side effects, it’s no wonder people turn to Benadryl and Ambien to cure their insomnia.

But before you hang your hat on those pharmaceutical solutions, you should really reconsider melatonin.

Well for starters, melatonin – which is technically known as N-acetyl-5-methoxy tryptamine – is a hormone naturally produced by the pineal gland of your brain. It plays an important role in regulating sleep and wakefulness.

But being natural isn’t the only reason.

Most notably, if you have used it before, you were almost certainly taking the wrong amount. You were overdosing on melatonin. Big time. That may be why your experience with it has been so awful.

How much melatonin should I take?

The optimal melatonin dosage for an adult is less than 1 mg. That’s according to MIT’s patent on using it for sleep. A 0.3 or 1.0 mg dose actually produces a greater feeling of sleepiness than 10 mg (10x the amount) and with fewer side effects. A single-dose between 0.1 and 1.0 mg will bring blood serum levels of melatonin within the normal physiological nocturnal levels.

Taking a higher dose doesn’t necessarily work better and in fact, may increase the amount of time it takes to fall asleep and decrease how long you stay asleep. 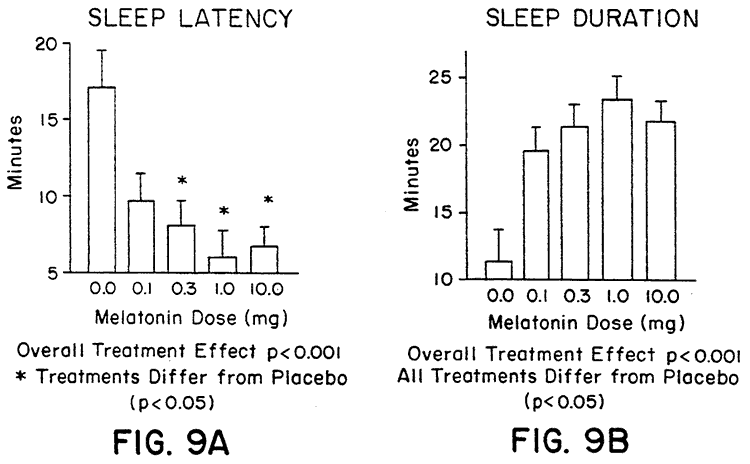 These charts come from human studies which were included in MIT’s patent filing. You can see how the 1 mg dose works better than the 10 mg, even though the latter is 10 times the amount!

A 3-10 mg dose of melatonin will work for the first few days but after that, the benefit is greatly reduced. The brain becomes sensitives to the overdosing. (1) (2)

In order to take a 1 mg or less dose, you may be required to buy a liquid melatonin supplement. That’s because capsules are almost always sold in higher dosages. Tablets can be broken but if they don’t have scoring on them, breaking off exactly 1 mg can be hard to do with a 5 or 10 mg dose. That’s why liquid is often the best type to take.

Why melatonin pills are bad

In 1993, MIT filed a patent for the best melatonin sleep dosage; 1 mg or less. Dr. Richard J. Wurtman is credited as the inventor. The application was approved in 1995.

During the 20 years after that, dietary supplements couldn’t legally sell capsules or tablets which were less than 1 mg. As such, they typically came to market with 3 and 5 mg pills, which is too much melatonin. Yet it was a way to circumvent the patent and avoid licensing it.

Given that using this substance for sleep was a novel idea, MIT could probably have claimed any dosage in their filing.

According to Dr. Wurtman, the whole reason they only pursued 1 mg or less was because:

In the 1990’s, the FDA had bigger issues to deal with, like nicotine addiction, and didn’t bother to step in on this issue.

As a result, up to 10 mg melatonin supplements are the norm on store shelves these days. (3)

Even though the patent has long expired, manufacturers continue to make these high dose melatonin tablets because the average consumer assumes that more is better. Since it sells better than a low dose version, they don’t really have a financial incentive to sell the right amount.

At the time of this review, here were the dosages being sold by major brands. Note that the descriptive names are what they are calling their products, not us.

Generic and lesser-known brands tend to use similar dosing amounts. 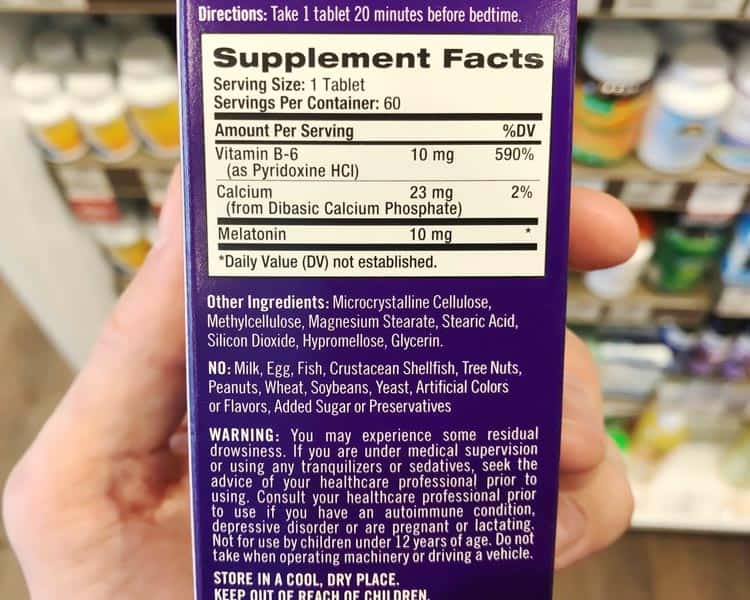 This is a typical supplement you will find for sale at a drugstore. Each tablet contains 10 mg of melatonin. You are instructed to take one 20 minutes prior to bed.

Some of the aforementioned brands do make 1 mg versions, but you typically have to go online to find them.

You may not find it for sale at Walmart, Walgreens, CVS, or Costco, but liquid melatonin is made by Zarbee’s, Natrol, Now, Source Naturals, Solgar, and Life Extension. You typically have to go to a place like The Vitamin Shoppe or GNC to find it.

If you live in the UK, don’t even bother looking at Holland & Barrett. Melatonin is banned in the UK because it’s considered a medicine. Just as what the MIT researchers thought the FDA would do for it, when its use for insomnia was discovered.

The reason melatonin is bad for you and not working is likely the result of taking too much. In dosages of 1 mg or less, supplements can be good for you if stress, anxiety, or jet lag are causing poor quality sleep. It should not be taken every night on a long term basis (several months or years) because the effects of doing so are unknown.

Taking melatonin every night, especially if you’re using too much, may result in a chemical dependency. Your brain may start to produce less and as a result, you become dependent on the supplements for getting a good night’s sleep.

It’s somewhat similar to being addicted to narcotics, whereas just to feel normal, one becomes reliant on boosted dopamine levels.

Side effects of too much melatonin

It is believed that 10 mg melatonin is safe on a short-term basis. No liver toxicity has been detected, nor any other detrimental long term effects. However, you are more likely to experience grogginess the next day after taking it. Many describe 3-10 mg dosages as producing a hangover-like feeling.

While daytime grogginess is the most common side effect experienced with melatonin, some people experience headaches, stomach cramps, irritability, and momentary depression when using.

In 2017, a Chinese university published as study reporting that melatonin increases aggression when compared to placebo. 63 healthy men participated, so it was a fairly large study. (4)

Even if you’re an adult, the best way to take liquid melatonin may be with a children’s version. That’s because the strength is watered down, so it’s easier to measure small amounts like 0.5 or 1.0 mg.

Zarbee’s Naturals children’s sleep liquid with melatonin contains no alcohol, dyes, artificial flavors, and is gluten free. It comes in a bottle with dropper. Each 1 mL measurement (a full dropper) contains 1 mg of melatonin.

That’s preferable to most other brands of liquid like Natrol, Source Naturals, and NOW. Those contain higher concentrations per dropper and/or unwanted additives like propylene glycol, alcohol, and sugar alcohols.

Solgar is the worst brand, as each dropperful of 1 mL contains far too much melatonin; 10 mg.

While Zarbee’s is a brand you can find readily stocked at drugstores, Walmart, etc. for cold, flu, and allergy relief products, they don’t always carry melatonin liquid. Here is the link for it on Amazon.

What’s the best tablet or capsule?

Dr. Richard Wurtman, the MIT professor credited as the inventor of using it for sleep, does have his own brand of melatonin supplements; Sleep Answer. It contains an optimal dosage of 0.9 mg per serving. 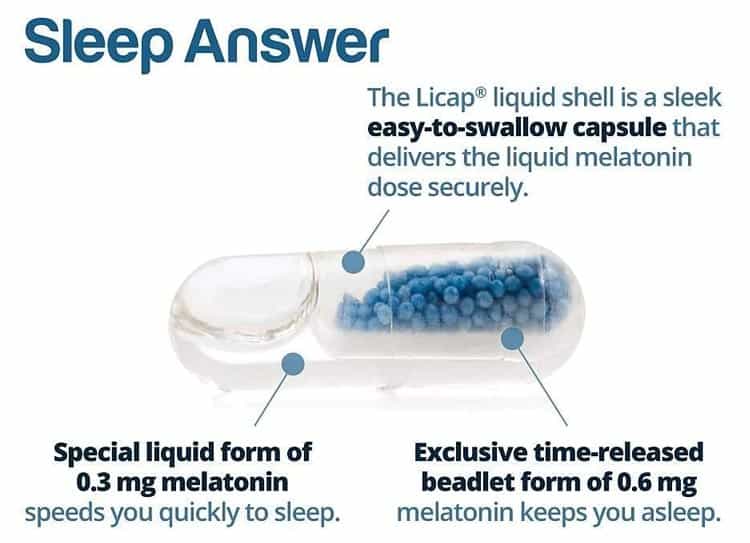 Of that, 0.3 mg is liquid melatonin for quick absorption. The other 0.6 mg is in time released beadlets. Those dissolve 3-4 hours after taking it, to help you stay asleep for 6-8 hours.

We have not seen it for sale at a brick and mortar store, only online. You can get it on Amazon.