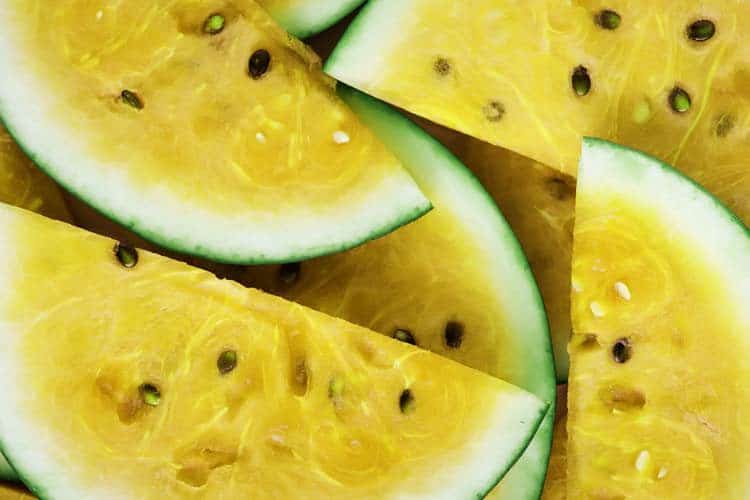 In addition to taking vegan BCAAs, one of us here at Superfoodly notices a profound difference during extreme exercise sessions when taking a 3-5g dosage of L-citrulline powder 1-2 hours prior.

On arm days, a 90-110 minute session is the norm. When the citrulline is taken, that last half hour doesn’t feel nearly as challenging. Plus, heavier weights are with greater ease. This is the brand he uses.

This is because citrulline is a precursor to making another amino acid, L arginine. That has been found to boost blood flow, by boosting nitric oxide (NO) production. (1)

The benefits for bodybuilders are multifold.

In addition to boosting NO, it’s been found to lessen muscle fatigue, by supporting the body’s ability to remove ammonia, and reabsorbing lactate for greater adenosine triphosphate (ATP) resynthesis. Those become more challenging for your body to accomplish during high-intensity exercise. (2)

Better cardiovascular performance is why it’s been studied for not just sports, but also heart disease and erectile dysfunction (ED). (3) (4)

Based on that, you may assume that L arginine foods are the way to go.

However, research suggests that taking the precursor (citrulline) may boost arginine levels in the blood even more than taking arginine directly. (5)

Though as with most things in science, the answer isn’t black and white. Perhaps the best solution is to consume both together. (6)

The tartness of many sour fruits does come from malate, albeit not in a form that’s bonded to protein molecules. 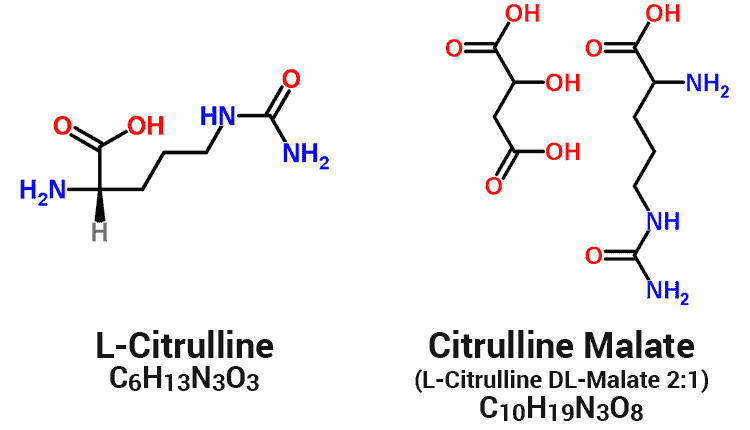 Supplements that use citrulline malate can have a 2:1 or 1:1 ratio. For example, a 2:1 ratio means there are 2 parts L citrulline for every 1 part of malate.

Most of the research involved citrulline malate 2:1, however many dietary supplements use a 1:1 ratio to cut costs. With those, a 3g serving of powder will contain 1.5g of L citrulline and 1.5g of malate.

There are two reasons why some believe L citrulline malate is better than plain L citrulline. The first is that it has better bioavailability. The second is that malic acid plays an important part in the citric acid cycle (CAC). Also known as the Krebs cycle, it’s a series of chemical reactions used to release stored energy.

While the importance of malic acid in the Kreb’s cycle is a fact, claims that it increases the absorption of citrulline remain unproven.

Within the past decade, over a dozen human clinical trials involving citrulline malate have been published. Most do suggest increased benefits for weight lifting, cycling, tennis, and muscle soreness, just to name a few. However, it was not found to improve muscle recovery in untrained young men. (7) (8) (9) (10) (11)

Furthermore, it’s unclear if the malate increases the efficacy of L citrulline, or if it merely adds additional (and separate) endurance and recovery benefits.

While L-citrulline malate is safe to take, there is no proof that the advantages of the amino acid it contains are better or worse than taking an equal dosage without the malic acid molecule attached.

It’s possible that any added benefits may also be accomplished by taking the amino acid and malic acid separately, but at the same time.

Because it’s created from the fermentation of arginine, it’s most prevalent in certain fruits. Nuts like almonds and walnuts, and legumes like chickpeas, can contain it but in smaller quantity.

Citrulline comes from the Latin word citrullus, which means watermelon. That is the first food it was discovered in; isolated in 1914 and fully identified in 1930. (12)

After yellow, orange watermelon is the second highest in L citrulline content. There’s 1.8 mg/g for the flesh and 1.5 mg/g for the rind.

Red, which is the most common type of watermelon, has the least amount of citrulline; 1 mg for the flesh and 0.8 mg per gram for the rind.

Regardless of color, watermelon rind has less citrulline than the edible fruit flesh. When both are dried, the rind has a higher concentration.

While you can eat watermelon rind, its hard and fibrous texture is tough to chew and digest. It’s better to drink it, by juicing it.

Watermelon leaves are edible and they’re one of the richest natural sources of citrulline. When grown in drought conditions, such as the Kalahari Desert where they’re native, they produce large amounts of citrulline in the leaves; to serve as an antioxidant, for countering the higher oxidative stress. (14) 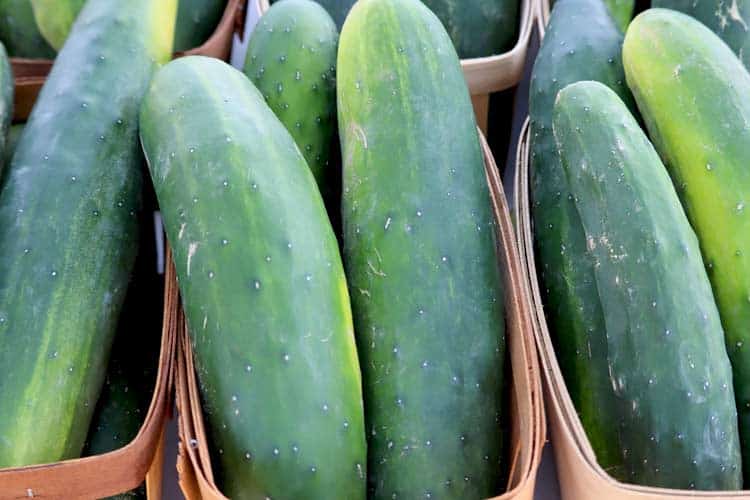 The citrulline content in cucumber is 0.146 mg/g for the fresh fruit or vegetable (if you care to call it that). Persian cucumbers will be comparable. While the amount is lower than watermelon, the advantage is that you can drink cucumber juice in high quantity, without the worry of high sugar and calories. (15)

There’s limited research which quantifies the amount of L-citrulline in pumpkins, though it has lower content than watermelon.

As with watermelon, the leaves of the pumpkin plant are a cheap and readily available dietary source when in-season.

Commonly called a cantaloupe in the US and Canada, muskmelon ranks high among the L citrulline whole foods.

Like pumpkins, squash are cultivars of the Cucurbitaceae family. All of those fruits/vegetables contain this amino acid.

Gourds, squash, and pumpkin are all in the same family. 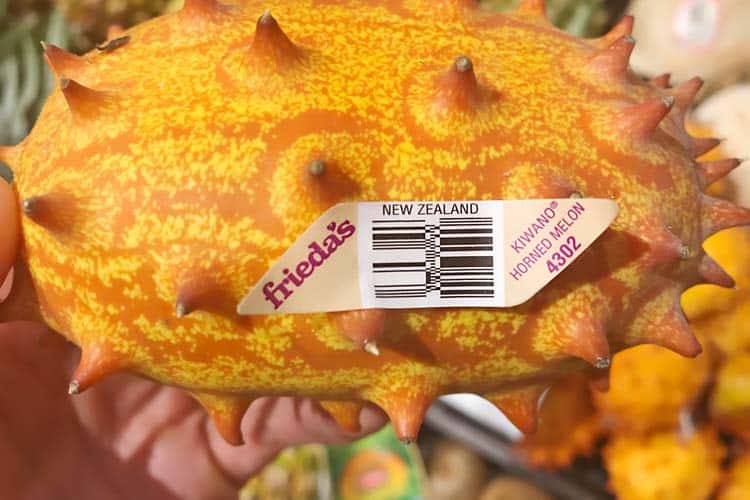 Also known as the African horned melon, for everything about it check out our piece on the kiwano.

A popular herbal remedy for erectile dysfunction is raw cold processed cocoa powder and other potent sources, like dark chocolate. There’s science to support this benefit; the citrulline in chocolate may cause better nitric oxide levels, which in turn, may help boost blood flow to the penis.

What’s the best way to take it?

The best natural and whole foods source of L-citrulline is arguably watermelon juice. Each liter (34 oz) will provide around 2.33g.

The minimum citrulline dosage used for bodybuilding and erectile dysfunction is typically 3g. To get that much from watermelon juice, you would have to drink about 44 oz. With that would come 82g of sugar and 420 calories.

Given the very high amounts of food one would need to consume to obtain 3+ grams of L citrulline, it’s understandable why supplements are used as the primary source. 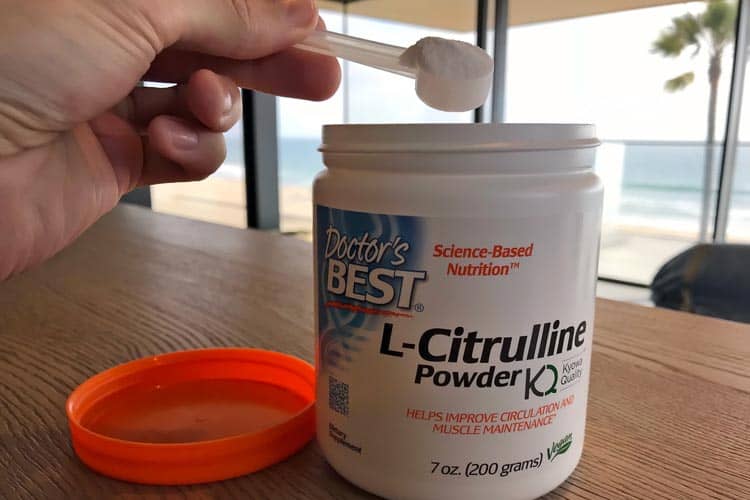 At Superfoodly, we use Doctor’s Best L-citrulline powder. It’s vegan and since it’s pure, it’s gluten free and soy free. We buy it on Amazon. While many advise supplementing during exercise or 30 minutes beforehand, we notice the best effects when taking it 1.5 to 2 hours before.

You can take L citrulline with or without food. Since it’s an amino acid, it’s digested by the kidneys. Its absorption is not dependent on fat or being water soluble.

These statements have not been evaluated by the Food and Drug Administration. This product is not intended to diagnose, treat, cure, or prevent any disease.
19
SHARES
FacebookTwitter