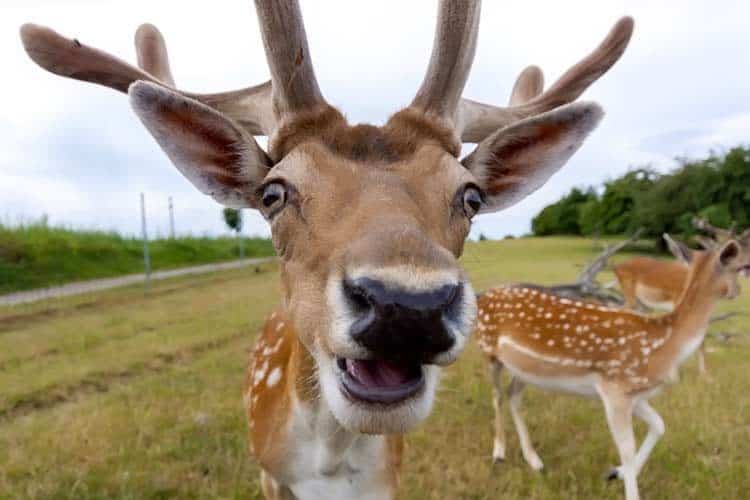 Is Venison (Deer Meat) Good For You? What No One Tells You

PETA may not want to admit it, but the fact is that in many parts of America, we have a massive overpopulation of deer and it’s dangerous.

Even though hunting season is short, it does help. Without hunters – or some other way of controlling the populations – inevitably there would be more human deaths from hitting them on the highway.

This is something many folks on the coasts often don’t realize. If you live in Michigan or Wisconsin, you can fully appreciate how dangerous it is to drive at night.

Angelenos fear drunk drivers, while Michiganders fear deer… and for a very good reason; collisions can be as bad as hitting another vehicle head-on.

The Insurance Institute for Highway Safety (IIHS) estimates that per year, there are 1.5 million car accidents involving deer. If you live in the most overpopulated states, your odds of hitting a deer can average 1 in 50 during a given year. (1)

Think about that… by the time you’re age 70 (driving for 50+ years) it’s probable you have had at least one accident involving a deer.

While some argue the morality of shooting Bambi, it’s hard to argue that hunting season makes the roads safer in states like Pennsylvania and West Virginia.

But is venison safe to eat? For you or even your dog?

Before we tell you the bad stuff, let’s give a rundown of the good things about having deer meat for dinner. The nutrition facts for calories, fat, protein, and cholesterol are taken from the Standard Reference entries in the USDA National Nutrient Database. (2) (3) (4) (5) (6)

While the above data is from the USDA, obviously the nutritional values for a food can vary by source and quality.

In the case of venison, the “real world” nutrition facts seem to match what the USDA reports, based on on this ground venison for sale. It has had its nutritional data tested and reported on the package. 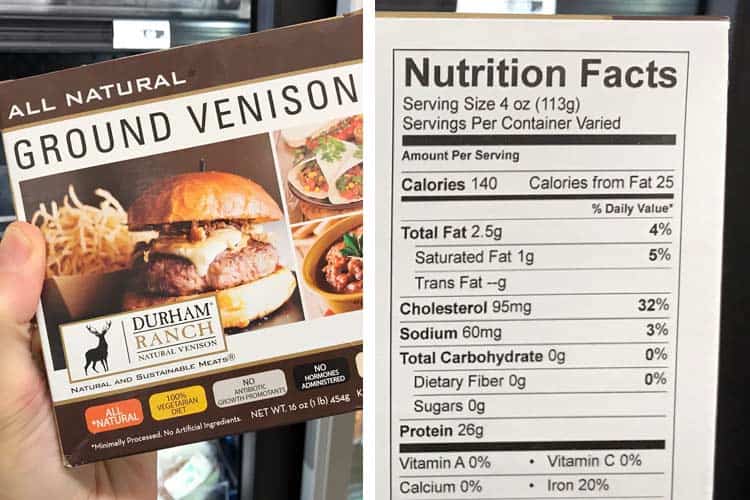 Where to buy venison?

Aside from butchers and independent stores who are willing to source from local hunters, there are very few suppliers that sell at traditional supermarkets on a widespread scale. Durham Ranch is one of the largest with venison for sale and you can find their brand at some higher-end grocers and co-ops.

They use grass-fed deer from family farms throughout New Zealand, so they are very comparable to the nutrition one would expect from a wild deer shot in the states, such as Ohio.

This package of Durham Ranch venison was spotted at a co-op in Los Angeles. You might find it sold at a place like Whole Foods but don’t count on a Walmart or Meijer having it.

Disadvantages versus other meats

Deer meat is considered red meat and in at least one aspect related to heart disease, it may be unhealthier than some other sources.

As with lamb and beef, there are high levels of L carnitine, which is not to be confused with the antioxidant L carnosine. According to a human trial published in the scientific journal Nature Medicine, there are “significant dose-dependent associations” between how much L-carnitine someone consumes and their risk for heart disease.

Why it’s so dangerous is because human gut flora metabolize it and in the process, create trimethylamine N-oxide (TMAO) which causes damage to the arteries. This can increase your risk for heart attacks, strokes, atherosclerosis, and congestive heart failure. (7) 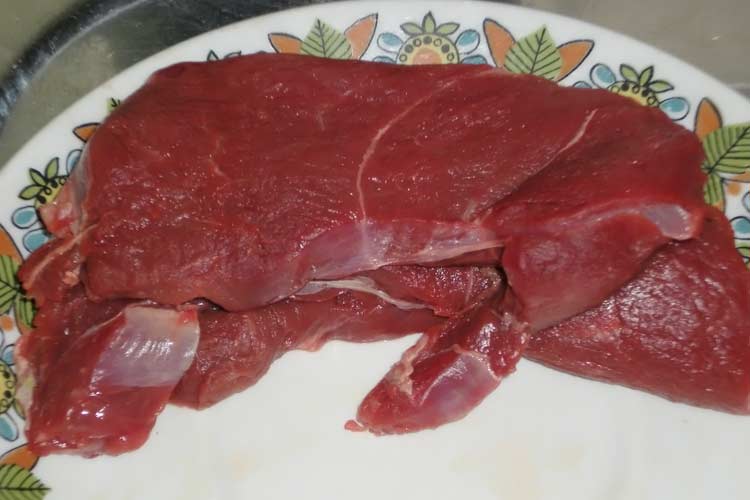 It can’t get any more red than this! Photo by Kueued [GFDL]

Being that it’s a red meat, eating venison increases risk for cancer according to The International Agency for Research on Cancer (IARC), which is part of the World Health Organization. (8)

Is venison high in cholesterol?

Unfortunately, yes. With 80 mg per 3.5 oz serving, it’s only slightly better than beef which is 89 mg. Chicken breast and pork sausage are both lower, at 64 and 70 mg respectively. Ground turkey is 69.

Whether it’s whitetail or reindeer, you won’t find many meats that have cholesterol as high as venison.

In regards to heart and cardiovascular health, one rebuttal may be that its lower saturated fat content results in lower triglyceride levels in blood. However, there has not been testing to verify that theory. Plus, triglycerides are a separate issue from the high LDL cholesterol.

Beef has more of the essential minerals, including iron, magnesium, phosphorus, and zinc. For most of these, venison does have more than chicken, turkey, and pork.

The danger no one talks about 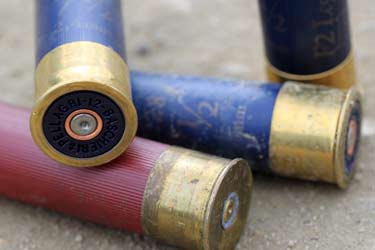 Despite the nutritional benefits of being lower calorie and having lower saturated fat, there is a side effect of venison that no other common meat carries; lead exposure.

With the exception of other game animals that are shot, like wild turkey and duck, this risk is generally not present with beef, chicken, pork, lamb, and store-bought turkey since they are killed without guns.

Consider the following quote from a Consensus Statement of Scientists, which included dozens of world-renowned leaders in their respected fields, ranging from a Harvard neurology professor to numerous top doctors, which included pediatricians. (9)

“Lead-based ammunition is likely the greatest, largely unregulated source of lead knowingly discharged into the environment in the United States. In contrast, other significant sources of lead in the environment, such as leaded gasoline, lead-based paint, and lead-based solder, are recognized as harmful and have been significantly reduced or eliminated over the past 50 years.”

The side effects of lead are not something controversial. No one disputes them like they do climate change. Everyone agrees it’s dangerous. As reported by the CDC and reiterated in that Statement:

“There is no level of lead exposure to children known to be without deleterious effects.”

Nor is it safe for adults, as it affects the brain and central nervous system, kidneys, reproductive organs, immune system, and blood function (hematological function). Oh yeah, and lead causes cancer.

Even when adjusted for differences in socioeconomic factors, numerous and multi-decade studies have confirmed that consumption of lead results in a lower IQ.

This is even evident many decades after exposure, as seen in a study involving present-day 38 year-old men and women, who tested for having elevated lead levels when they were 11. (10)

There is a 1.61 point drop in IQ score for every 5 micrograms per deciliter of lead that was previously detected in their blood.

So while there is a benefit of hunting – reducing overpopulation of deer – there is a danger in the lead that it’s putting into the environment. Lead that makes its way into water runoffs can eventually end up in municipal water supplies and household wells.

However, environmental contamination should probably be the least of our concerns, relatively speaking. The bigger danger is the venison you eat.

As detailed in the official journal of the Alliance for Academic Internal Medicine, up to 95% of American hunters still use lead ammo. Given that, the following finding makes sense (11):

“80% of ground meat packages of wild-harvested deer contain lead and this lead is bioavailable.”

Okay, so that contamination must be from folks who aren’t cleaning their meat carefully, right?

Surely, you can do a better job. Because you remove the areas with lead projectiles and carefully dig out any pieces.

Sorry, but it’s not that simple.

They report an average of 356 individual lead fragments are in a deer carcass after it has been shot with a rifle using lead ammo.

Do you recall picking out 356 individual pieces from the last deer you shot?

But wait, the news gets even worse…

While “bullets typically release hundreds or thousands of fragments of varying size that can be visualized using X-rays” the situation gets messier when you measure the smallest pieces; the particles.

Microscopic, meaning you will never see them.

You may be eating 3 to 5 billion particles of lead per 3.5 oz. serving of venison.

Given the softness of this metal and how it fragments upon impact, this should come as no surprise to any gun enthusiast who understands how they work. Especially with shotguns, since those are intentionally designed to spray the pellets. 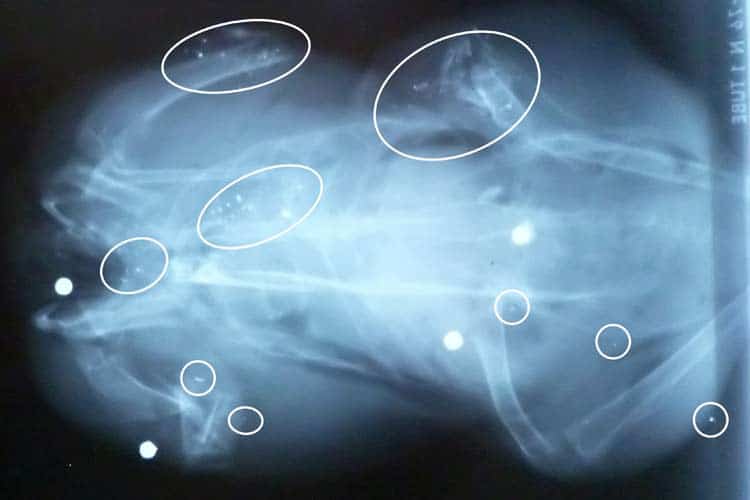 Deer aside, this problem happens with all wild game. Just take a look at this X-ray of a common wood pigeon that was shot.

You can even see how in the areas around bone, the impacts caused the lead to break into even smaller fragments.

Its primary benefits are being lower in calories and having less saturated fat than beef. Since 95% of hunters in America still use lead-based bullets, venison is a major source of lead exposure.

This is particularly dangerous to children, toddlers, and babies. Being that it’s a red meat with high amounts of cholesterol and L carnitine, both of which are linked to heart disease, overall deer meet is unhealthy.

Is venison good for dogs? Perhaps using the meat as a low-cost dog food makes more sense than giving it to humans, however that means you’re just passing along the lead to faithful Fido.

Unfortunately, the fact that venison is unsafe because of lead is something few hunters want to accept. We stick our heads in the sand and just deny it.

In that aforementioned scientific journal, they quote a doctor’s frustration with this:

Often when I explain to hunters the risks associated with lead exposure, especially when considering their children, their response is, “I have been hunting for years and I am fine.” My response to them is, “but just imagine how smart you could have been.”

While using lead-free buckshot and bullets does address the elephant in the room, it still leaves you with a meat source that is less healthy than alternatives.