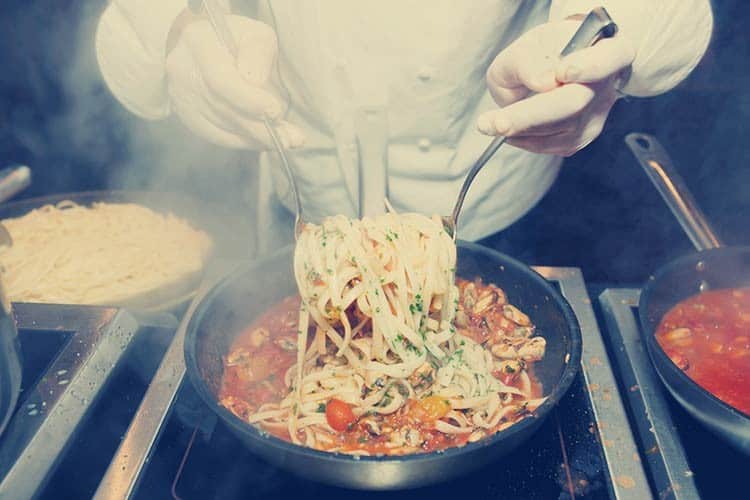 Is Teflon & Calphalon Safe To Cook With?

Q: Dear Superfoodly, how does the safety of non-stick Calphalon vs. Teflon compare? Do they cause cancer? I have heard there are potential health risks associated with Teflon when its surface scratches or begins to break down. Do they contain PFOA, PTFE, or other potentially dangerous chemicals?

You need to consider not just the chemicals which might be on your food, but also the ones which may be added to it from your cookware. Everyone seems to focus on an organic and non GMO diet, while forgetting other sources like cookware.

While neither brand uses PFOA, both use PTFE. When PTFE is overheated, that’s when health side effects may possibly arise (but to reiterate, cancer is not one of them).

Fortunately within the past decade or so, a healthy alternative to Teflon has come to market; ceramic non-stick cookware.

It achieves non-stick properties by having a nano-smooth ceramic coating. You can even cook most things without oil. Cleanup is a breeze, you won’t need a Scotch-Brit.

That’s why here at Superfoodly, we personally use this set of non-stick cookware.

If you want to cook with Teflon and equivalent, we will discuss how to do so safely below. First though, let’s clarify the difference between these two brands.

DuPont discovered the Polytetrafluoroethylene (PTFE) based substance in 1938, which they branded as Teflon.

The manufacturer of Teflon today is Chemours (which was spun-off from DuPont in 2015).

Being that it’s an 80 year-old technology, obviously it is off-patent. Though Chemours still sells their Teflon branded PTFE coatings to many different cookware manufacturers for use in their pots and pans.

Additionally, other chemical companies now make their own PTFE coatings, but they can’t sell those using the Teflon brand name.

Some cookware manufacturers will use Teflon brand coatings on their products and some will use a non-branded (or non-labeled) PTFE coating and simply call it a non-stick cooking surface.

Think of it as buying Kleenex brand versus another brand or generic facial tissue. All are similar products made with similar materials.

Normally, companies boast when their product uses a brand name component or ingredient.

Ironically, perhaps due to the cancer causing rumors associated with Teflon’s PFOA (a different chemical), now it seems many cookware companies have chosen to not use their branded PTFE coating on their products (or not prominently disclose it if they are).

Calphalon is a brand of cookware owned by the Newell Rubbermaid corporation.

Calphalon nonstick surfaces do use a PTFE coating.

Is Calphalon Teflon free? Yes, because they don’t use the Teflon brand for their coating. But both are similar in that they use PTFE in their non-stick surfaces.

It is true that after extensive research, we at Superfoodly have chosen not to use PTFE in our own kitchens (more on that in a minute).

That said, it is important to get the facts straight. When people make accusations of PFOA and PTFE cookware causing cancer or other health risks, they’re often false or inaccurate.

Is Calphalon safe? How about Teflon? Even us – who choose not to use these products – fully admit that when properly used and maintained, they are safe and not toxic (1).

Furthermore, after many decades of research and development, advances have been made with these PTFE coatings to make them more durable and for that reason, less prone to failure (and therefore safer) than the earliest iterations of them. 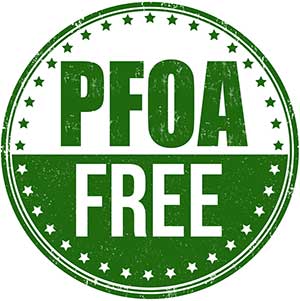 Another improvement is the elimination of perfluorooctanoic acid (PFOA).

Totally different from the purpose of PTFE is a different controversial chemical, PFOA.

Up until 2013, DuPont used PFOA during the production process of their Teflon. Now they don’t.

Even when they did use it, it’s worth mentioning that was during the manufacturing, only trace amounts remained in the final product. PFOA was not used, at least not intentionally, in the non-stick coating.

There has been a great deal of research and studies which suggest a link between increased PFOA exposure and cancer. For example, testicular cancer, ovarian cancer, kidney cancer, and non-Hodgkin lymphoma (2). But that research involved people who lived next to the Teflon manufacturing facility in West Virginia, it was not study involving PFOA in cookware.

There has also been research suggesting a link with PFOA and ulcerative colitis. It took place from 2008 through 2011, involving some 32,000 adults living in Ohio who were exposed to the toxins from environmental pollution. The incidence of colitis was “significantly increased” in this community (6).

Since they nor Teflon use it, it actually lends credence to buying their brands versus a generic made in China non-stick skillet or sauce pan which may or may not be PFOA free.

What about PFOS and water pollution?

PFOA was used during the production of non-stick coatings. It’s similar to PFOS (perfluorooctanesulphonate) as both are in the same category of perfluoroalkyl compounds.

Known as “forever chemicals” because they don’t break down, these indeed are toxic and bind to proteins in living species.

Liver problems, thyroid dysfunction, delayed puberty, osteoarthritis, and a laundry list of other endocrinology problems are linked with these chemicals. 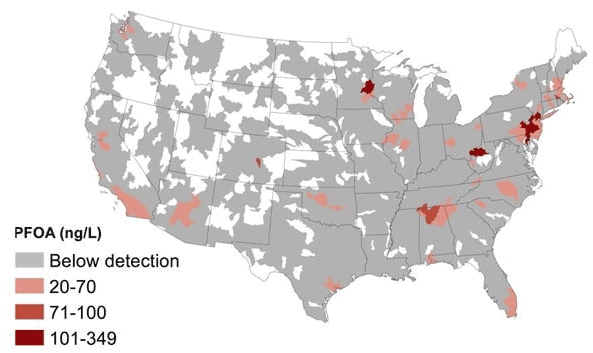 Contamination levels of PFOA throughout the US.

These chemicals and their cleanup is a crisis. Ground water and waterways near manufacturing facilities are contaminated with no good fix in sight.

However, remember these were used in the manufacturing process of non-stick coatings. They weren’t actually in the final products – e.g. pots and pans. (6)

Where is Calphalon made?

Speaking of country of origin, where is Calphalon made? As recently as the 90’s and perhaps the 00’s, they were 100% made in the USA, but that is no longer the case today.

In 2016 when we browsed Calphalon Contemporary reviews on a number of websites, we noticed a trend of people complaining they were made in China. For the product specs listed on retailer websites, we also saw “Country of Manufacture: China” for each Contemporary line item we randomly checked, such as frying pan set, dutch oven, and sauce pan.

When we checked a few random items for the Calphalon Simply Nonstick line, we also saw made in China.

For Calphalon Signature we saw “Country of Manufacture: United States” for the items checked. It’s not clear whether all of the Signature line is made in the USA, but all that we looked at were.

Even for the versions that are made in China, one can assume higher quality control is used versus that of a generic made in China cookware manufacturer.

For that reason, if you’re going to buy PTFE non-stick, trusted brands like Calphalon (and Teflon) are better since you can be confident they are truly PFOA free.

So why do we not cook with PTFE?

To be perfectly clear, Calphalon is safe to use. Teflon is equally safe. If they’re always used within the manufacturer’s advised temperature ranges, there are no dangers.

Though PTFE coatings in general – which is not specific to any brand – do begin to degrade at higher temperatures. Not in our words, but per Wikipedia (3):

“While PTFE is stable and nontoxic at lower temperatures, it begins to deteriorate after the temperature of cookware reaches about 260 °C (500 °F), and decomposes above 350 °C (662 °F). The degradation by-products can be lethal to birds, and can cause flu-like symptoms in humans. See polymer fume fever.”

The answer to this is “don’t let them get too hot” according to the non-profit Environmental Working Group, but that seems easier said than done. Do you use a thermometer in your stir fry? Probably not.

And if you have a high-end gas range, chances are those burners have the potential to put out a lot BTUs (units of measured heat given off). 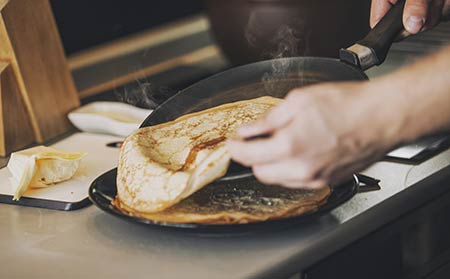 Other words of advice from the Environmental Working Group (4):

Don’t use high heat to jumpstart the preheating of a PTFE pan, especially empty pans, which can quickly reach hot temperatures. They claim when empty, they can reach 750 to 800 degrees within several minutes.

Don’t broil, because temperatures “can easily exceed 1,000 degrees” they claim.

It is actually these fumes formed at high heat which pose risks. Most ask if scratched pans are dangerous, but as it turns out, digesting flakes containing PTFE is believed to be harmless because they pass through your digestion system and exit your body. Regardless, we’re not recommending you eat a cereal bowl of PTFE flakes for breakfast tomorrow!

So even though PTFE is completely safe when used as instructed, many people aren’t confident enough they won’t ever make a mistake… including us!

Does PTFE cause cancer when it deteriorates? No. It is not identified as a carcinogen by World Health Organization or Environmental Protection Agency. Therefore, Calphalon and Teflon do not cause cancer. They are not toxic when used as instructed.

That being said – when used incorrectly – there is the possibility of polymer fume fever (a.k.a. “Teflon flu”) symptoms associated with using PTFE cookware. It is potentially lethal for birds. In humans, within 4 to 10 hours of exposure, symptoms of “fever, shaking chills, arthalgias, myalgias, headache, and malaise” may occur (5).

Buying PFOA free is less of an issue since it is being phased out in cookware. As mentioned, right now Calphalon and Teflon don’t use it.

But if you want PTFE free too, your choices will be greatly limited. There’s stainless steel, copper, and aluminum, but we prefer not to use those as we don’t want the possibility of those metals scratching off or leaching into our food.

These are the two best alternatives:

As often is the case, turning back to “old” technology like this is a good idea.

If you’re okay with made in China versions, you can find pick up a set fairly cheap.

If you want the best PTFE and PFOA free cast iron ceramic – and you’re willing to invest the money for quality – go with what’s in our own kitchen: Le Creuset

And since some colors aren’t made forever, you sometimes see the vintage selling for more than a comparable brand new costs in a different color.

If the you-know-what hits the fan, you can always sell them and at least re-coup a fair amount of the money spent. The same can’t be said about other brands.

Yeah they cost a lot, but they are often once-in-lifetime purchases. They get passed down generations. 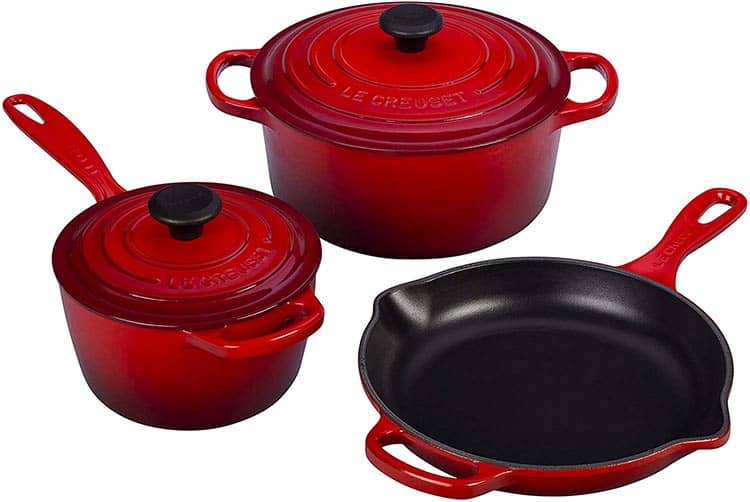 Pictured above is a basic starter set on Amazon but be warned, it’s expensive!

Unlike cast iron ceramic which has been around for more than a century, nano-smooth ceramic coatings are new; within just the past decade or two.

Before this, we used Le Creuset and still do for pots. However for anything we want to make in a skillet or frying pan, we use our non-stick ceramic.

If we had no cookware and were to buy a new set today, we would only buy this. Unlike Le Creuset which might cost you $1,000 to $2,000 or more for a full-sized set, you can pick up non-stick ceramic for a tiny fraction of that price. 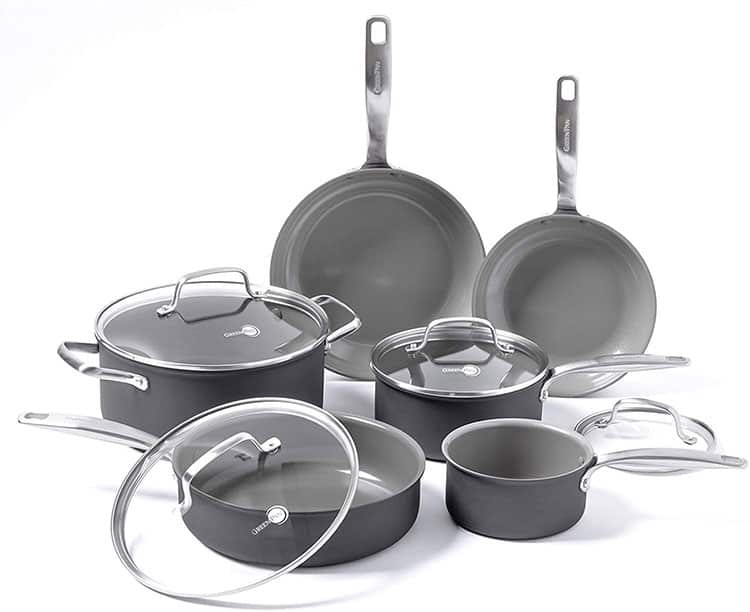 Made by GreenPan, above is the exact same 10-piece set we have and it’s a great value. You can get it on Amazon.