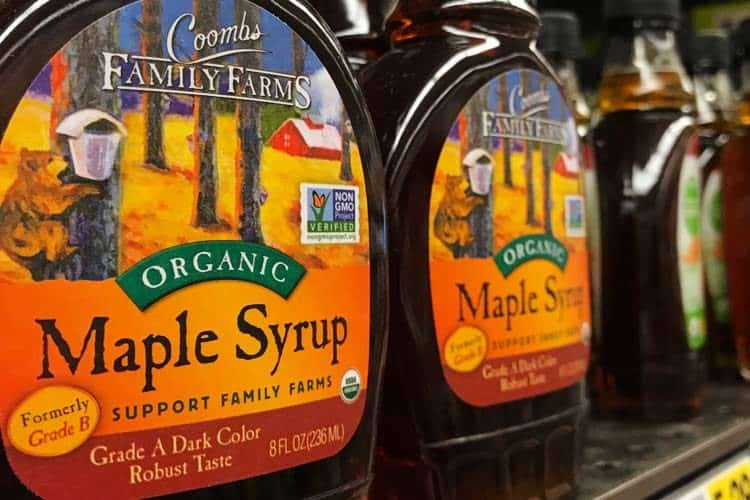 Is Maple Syrup Healthy? Grade A vs. B Antioxidant Levels

Those who say sea salt is good for you often say the same thing about this natural sweetener.

Though let’s be honest here… whether it’s made from beet, cane, or the sap of a tree, nothing that has 14g of sugar per tablespoon is “good” for you in high amounts.

All grades of maple syrup and white table sugar have roughly the same amount of sugar, when comparing equal portions of each.

That said, it is true that sea salt and this golden amber syrup can be better for you versus their more refined counterparts.

Setting aside the nonnutritive (non-glycemic impacting) sweeteners like stevia, monk fruit and miracle berry, you can actually make the case that this is the best one for you.

Maple syrup is healthier for you because it has a glycemic index (GI) of 54, compared to 60 for cane sugar. It contains trace amounts of calcium, iron, zinc, and manganese. There are more antioxidants in maple versus honey and brown sugar.

It’s also worth noting that the GI is better than pure honey, which is 58. It’s a fallacy that honey is a good option for diabetics.

Those glycemic index readings are based on people who were tested after consuming a 25g portion of each sweetener, which is about 6 teaspoons worth. The 9% lower reading is certainly better, though it doesn’t make it a guilt-free food by any means. (1) (2) (3)

Guilt-free or not, there’s no denying the fact that pancakes, waffles, and many other recipes simply would not taste the same if you were using stevia or some other healthy alternative.

It would basically be a sin to not at least use some of the real thing in your recipes, right? So when you do indulge, which grade of maple syrup is the healthiest to eat?

Well first, you need to understand their differences…

The difference between grade A vs. grade B maple syrup is the color and flavor. Grade B is harvested later in the season, which makes a darker, thicker, and stronger tasting syrup. Grade A is lighter in color with a more mellow taste.

Many professional chefs and home cooks alike still reference the grade A and B names in recipes, but this grading system was officially changed a few years ago, back in 2015.

Technically you can no longer buy grade B maple syrup. It has been replaced with Grade A dark. 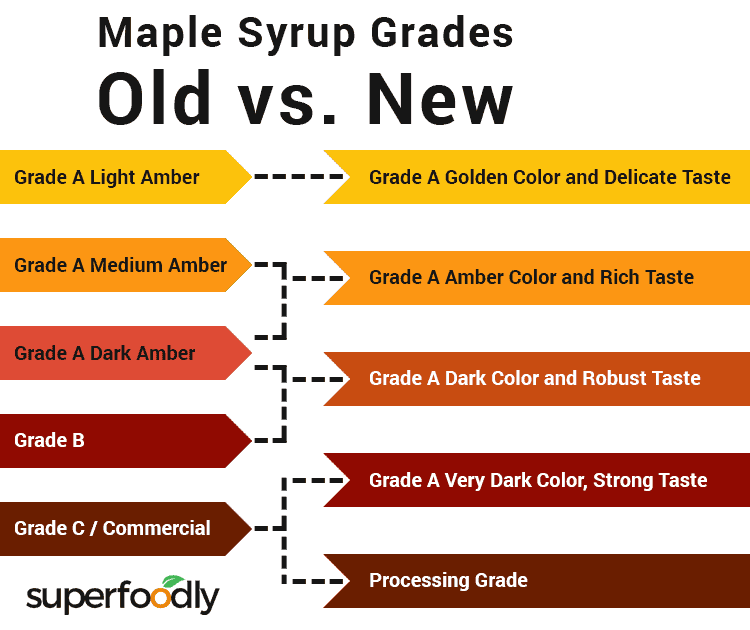 The USDA adapted the grading system based on proposed changes from the International Maple Syrup Institute (IMSI).

As of 2015, the Canadian government uses the same grading system as the US.

We interviewed a representative from Coombs Family Farms – which is a popular brand of organic maple syrup – and she explained why the system was changed:

The reason the maple grading was changed was because consumers perceived or assumed that grade B was an inferior quality syrup. In turn, many would seek out grade A dark when there was no such thing. Or they would expect a lower price point for grade B dark.

In actuality, Grade B was of the same quality as Grade A. Yet the naming didn’t convey that message.

To avoid confusion, the industry reclassified all maple syrups as being grade A. There is also processing grade (formerly grade C or commercial) which is not sold at retail.

What is grade A?

According the USDA, the difference between the new grade A classifications and lower quality processing grade syrup is outlined in 7 U.S.C. 1621-1627.

U.S. Grade A is the quality of maple syrup that:

Processing grade also has <68.9% solids content, though it can be any color, with any amount of light transmittance, and can contain “off flavors and odors.”

Here’s how grade A are categorized:

Now that you know the similarities and differences between them, you can make sense as to which one is best for you. (4)

What grade maple syrup is healthiest?

Whether it’s for use in a master cleanse or as a topping for your pancakes, Grade A Very Dark will be better for you. It has more antioxidants and mineral content than the lighter colors.

With an ORAC value of 590, how much antioxidants there are in regular maple syrup – such as golden or amber – is comparable to green peas (600), leeks (569), and celery (552). It may seem impressive to see them ranked next to those healthy vegetables, yet these are all low relatively amounts when compared to superfoods like amla berry and camu camu.

Most importantly, ORAC is a measure of antioxidants by weight. Obviously you can pig out on all the peas and celery you want, while this sugary liquid is something you can only consume sparingly.

Japanese researchers at Tokyo Kasei-Gakuin University published a fascinating study which evaluated the different grades of maple syrup for antioxidant activity. They didn’t use the United States or Canadian government’s official grading however their categories are analogous; ordering them from extra light to dark.

As expected, all have comparable amounts of sucrose, fructose, and glucose. This is why all grades of maple syrup, whether light or dark (i.e. Grade B), will have a comparable glycemic index (GI) rating in the mid to high 50’s.

What’s not comparable are the ORAC values for each kind… 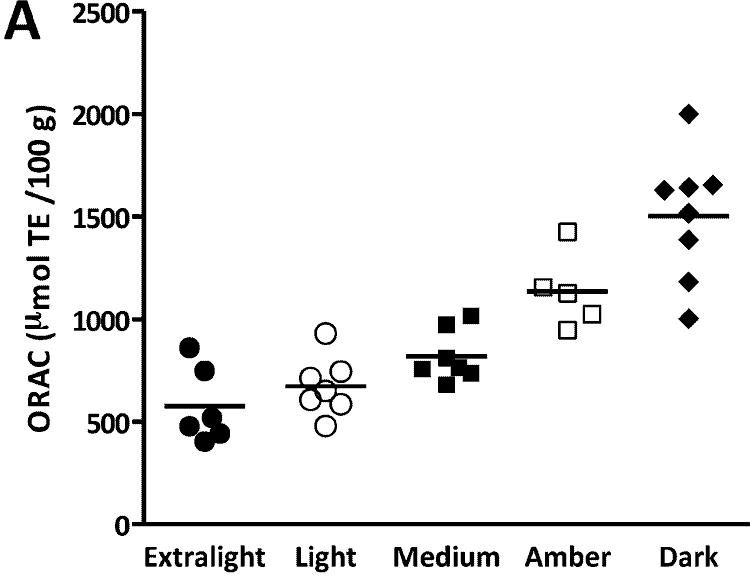 The dark have up to 300% more antioxidants than light.

In other words, the old Grade B, which is now this one:

…will have up to 300% more antioxidants than this one:

That’s something you won’t find on their nutrition facts label. So how about the things you will? 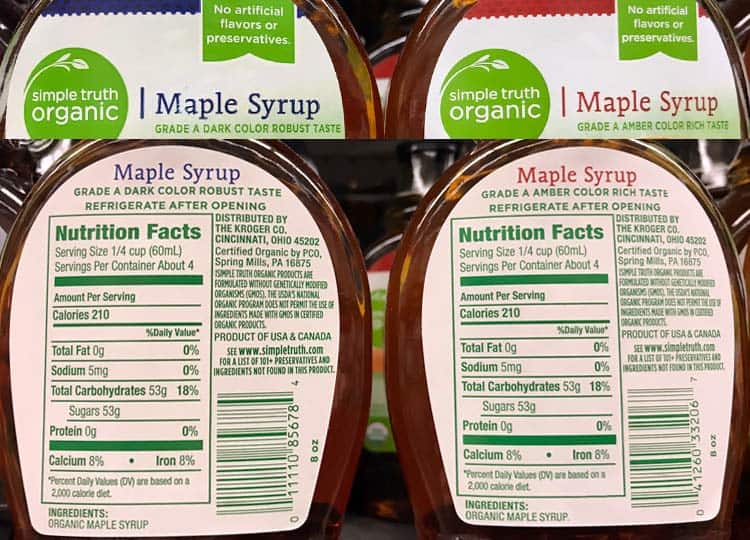 Grade A Golden, Amber, and Dark (formerly Grade B) will all have the same nutrition facts for calories, carbs, sugar content, and sodium. A ¼ cup serving will be 210 calories and have 53g of sugar. The essential minerals calcium and iron will each be at 8% of the daily value, yet the darkest may be even higher. Contrary to what some claim about vitamin C content, there are no vitamins in maple syrup.

These nutritional values can differ slightly by brand, though any variances are unrelated to the color.

The healthiest maple syrup to buy will be the darkest ones. With ORAC values ranging from 1,500 to 2,000, their concentration of antioxidants is comparable to Hass avocado (1,922), lacinato kale (1,773), black grapes (1,746) and pink grapefruit (1,548). Since their sugar in content is comparable, there’s no reason to choose light maple syrup over dark unless you dislike the strong flavor. (4)

Which brands to buy (and avoid)

Pancake syrups taste similar to real maple syrup, but their ingredients and nutrition are not the same.

The difference between maple syrup and pancake syrup like Aunt Jemima, Karo, and Mrs. Butterworth’s is that they are actually high fructose corn syrup, combined with natural and artificial flavors. Cellulose gum is sometimes used to thicken up their texture. Caramel color is added.

Golden syrup is not the same as maple. It has a naturally occurring light amber color but it’s made from different ingredients; inverted sugar from cane or beets. Sold in a can, Lyle’s from the UK is the most well-known golden syrup. It’s better for you than Aunt Jemima, but it’s still not the real deal.

Don’t buy golden syrups, pancake syrups, or other maple-flavored sweeteners for your pancakes or cleanses.

Should you buy organic maple syrup?

Both conventional and organic should be vegan, gluten free, and non-GMO if they are pure.

Since it’s a 100% natural product to begin with, it seems like a waste of money to buy organic. Until you consider the following…

Up until the 1980’s, there was a rampant practice of using formaldehyde pellets in the tap holes to increase the amount of liquid harvested from sugar maple, red maple, and black maple trees.

Using formaldehyde is now illegal, so in theory, both conventional and organic maple syrups should be formaldehyde-free. But cheaters have been caught and who knows how many haven’t been. USDA certified organic crops go through extra scrutiny and testing, which makes cheating even more difficult.

Organically-sourced syrups are banned from using chemical defoamers to prevent bubbling. Wisconsin-based Maple Valley Cooperative says they take extra steps to ensure their farms use collection containers and processing equipment which is lead-free. They sell a 5-day master cleanse and you can buy the kit on Amazon.

When it comes to buying plain syrup, for maximum antioxidant content, go with the darkest type available; Grade A Very Dark Color and Strong Taste.

Surprisingly, this type is very hard to find for sale at retail locations.

None were seen at Kroger’s. At Whole Foods, a brand like Coombs Family Farms might be the darkest you will see. It’s Grade A Dark and Robust Taste – one grade lighter. 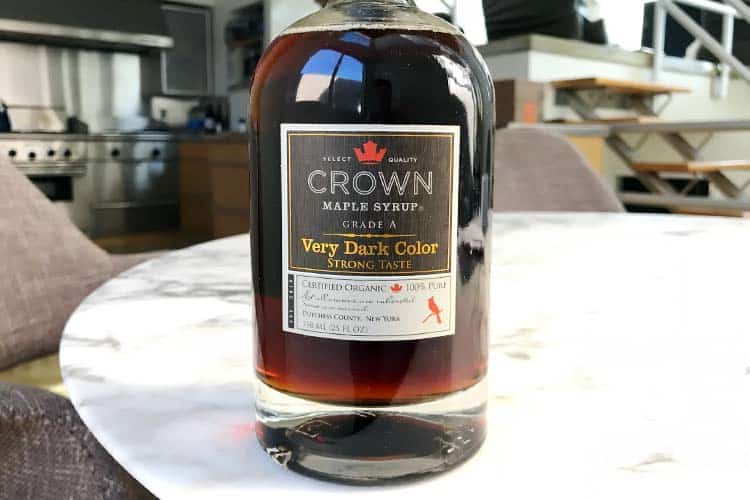 For the absolute darkest grade, try the brand Crown available on Amazon. It’s USDA certified organic and comes in a glass bottle. As evidenced by the above photo, Crown is the brand we use and prefer for our own kitchens.